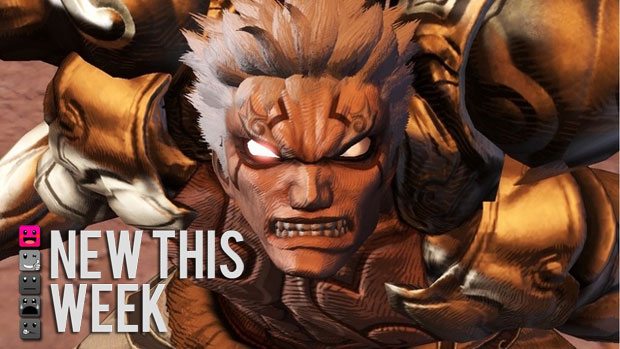 Here are your video game releases for the week of February 20th, 2012.

Alan Wake’s American Nightmare – XBLA – In this brand new standalone experience, Alan Wake fights the herald of darkness, the evil Mr. Scratch! A thrilling new storyline, hordes of creepy enemies, serious firepower and beautiful Arizona locations, combined with a fun and challenging new game mode make this a must for Alan Wake veterans, and the perfect jumping on point for new players! Play the full-fledged Story Mode, and you’ll be on the edge of your seat as you fight to stop your murderous evil double to take back your life… and change reality itself! But there’s more to this nightmare – in the action-packed Arcade Mode, you’ll need to master the Fight with Light mechanic to stay alive until dawn and beat your friends on the Leaderboards. Can you survive until sunrise?

Asura’s Wrath – Xbox 360, PS3 – Asura’s Wrath is an Action game in which players take on the role of the demigod Asura, and take on his quest for justice and revenge against the divine powers that cast him from heaven. The game utilizes a “Beat-em Up” gameplay mechanic and an episodic narrative storyline rooted in Asian mythology and sci-fi traditions. Additional features include: a range of unique enemies, planetary sized bosses, a second playable character and a devastating attack system.

Syndicate – Xbox 360, PS3, PC – Syndicate is the re-imagination of a cult classic franchise from 1993 – a unique action shooter set in a not too distant future, where Business is War.

Saints Row: The Third “Gangsta’s in Space” – Xbox 360, PS3, PC – Years after taking Stilwater for their own, the Third Street Saints have evolved from street gang to household brand name, with Saints sneakers, Saints energy drinks and Johnny Gat bobble head dolls all available at a store near you. The Saints are kings of Stilwater, but their celebrity status has not gone unnoticed. The Syndicate, a legendary criminal fraternity with pawns in play all over the globe, has turned its eye on the Saints and demands tribute. Refusing to kneel to the Syndicate, you take the fight to a new city, playing out the most outlandish gameplay scenarios ever seen.

Fractured Soul – 3DS – In Fractured Soul 3D, players take on the role of interplanetary rogue, Jake DeSaul – a man with a checkered and mysterious past who must confront his demons in his desperate plight to escape an eerie and malevolent space station. As they progress through each level, the boundaries between dream and reality continue to blur as Jake faces a lifetime of regrets, hopes, dreams, and what might have been in his efforts to reconcile himself with his past. In order to help Jake, players much blast their way through 20 exciting and brain bending platform levels spread across five distinct worlds – each offering a unique challenge including inverted gravity, damage, wind, ice, and underwater. Additionally, there are four shoot ’em up levels that also make use of the screen switching. Each level is timed and ranked to encourage replayability.

Zuma’s Revenge – DS – An irresistible force has taken our fearless frog to a newly evolved world of Zuma ruled by evil tiki bosses. Fire stone spheres to destroy the deadly stream of balls in this PopCap ball-blasting challenge! Conquer over 60 Adventure levels and battle six imposing tiki bosses. Stay sharp in five frog-boggling modes including Challenge, Iron Frog and DS-exclusive Daily Dungeon and Versus modes. Slide and hop for smarter shots, hit targets for exotic bonuses and detonate explosive power-up balls. Will you succumb to the perilous pitfalls, or can you tame the jungle and guide your agile amphibian to victory?

PlayStation Vita Retail – Sony’s PlayStation Vita retains the familiar general form of the PlayStation Portable hardware series while dramatically improving on virtually every aspect of its use with powerful and exciting new features including: dual touch pads at the front and rear, dual cameras at the front and rear, dual analog sticks, a 5-inch OLED screen, GPS, six-axis motion sensors and a three-axis electronic compass and exceptional built-in connectivity via both Wi-Fi* and exclusive to this model, an always on 3G connection.** Taken together this makes for a handheld gaming device that truly signals the entry of handhelds into the world of Next-Gen gaming.

Touch My Katamari – PS Vita – Touch My Katamari is a quirky Puzzle-Action game for PlayStation Vita in which players follow the commands of the in-game “King of All Cosmos” to accumulate items into various sized masses called Katamari, using the game franchise’s familiar rolling mechanic and timed mission play. The game utilizes the PS Vita’s front and rear touch controls as well as its analog sticks to do this, as well as to navigate the play area. The game features: an in-game economy allowing for purchases and upgrades, unlockable game modes, special bonus missions and online leaderboards.

Shinobido 2: Revenge of Zen – PS Vita – Shinobido 2: Revenge of Zen is a single player Stealth-Action game that utilizes the evolving storyline of the Shinobido game franchise, and the power and advanced features of the PlayStation Vita to bring true ninja style gameplay to handheld players. The game features open world to explore, a dynamic storyline that changes depending on the player’s actions in mission-based gameplay, a variety of ninja abilities, item creation through alchemy, an in-game economy, the ability to share items wirelessly and Ps Vita touchscreen control integration.