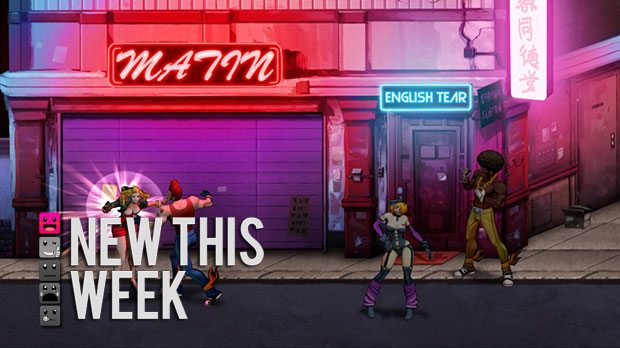 Double Dragon Neon – PlayStation 3, Xbox 360 – The reinvigorated update to the 80′s beat’em up smash hit that is reminiscent to the original. Trained by their sensei in the special form of martial arts called Sōsetsuken, Billy and Jimmy are equipped with lethal combat skills and weaponry to bust some faces and battle the baddest goons around as they journey across the galaxy to rescue the love of their lives.

Transformers: Fall of Cybertron “Dino DLC” – PC, PlayStation 3, Xbox 360 – Fall of Cybertron transports you to the final days of the planet Cybertron where you will experience the darkest hours of the apocalyptic war between the Autobots and Decepticons. Embark on an adrenaline-fueled journey through a wide range of missions and massive environments designed around each character’s unique abilities.

Joe Danger 2: The Movie – Xbox 360 – Download and play an exhilarating journey through the greatest action movie ever made, starring the world’s greatest stuntman and action hero Joe Danger. Take on Team Nasty in the Movie and Deleted Scene modes, then let your creativity work in the Movie Maker and four way Multiplayer modes to create cinematic history and entertain millions over Xbox Live!

NBA Baller Beats – Xbox 360 – NBA Baller Beats is the first ever motion-based sports video game that requires you to actively play using a real basketball. The music is your guide as you aspire to perform like a pro and practice your ball-handling skills while building stamina you’ll need for the court – all while having the fun of playing a video game.

Tryst – PC – Tryst is a competitive Real Time Strategy Game that aims to provide a unique, fast paced spin to the established strategy model that combines player choice with unit customization. War has erupted on the lonely planet of Ishtonia IV. Humans and a sentient, mechanical alien race known as the Zali – former collaborators in the mining and processing of the rare compound, Lohum – now see each other as threats to their continued existence on the planet both had so tenuously shared.

I Am Alive – PC – One year after a worldwide cataclysmic event has wiped out most of human civilization, a man struggles for survival. Faced with an insecure, decaying, and hazardous world, he scours a desolated city, searching for his long lost wife and daughter. Survive the suffocating, murky streets covered in dust.