New This Week in Video Games | Into The Borderlands, Again

The latest news in the world of video games at Attack of the Fanboy
September 16th, 2012 by William Schwartz 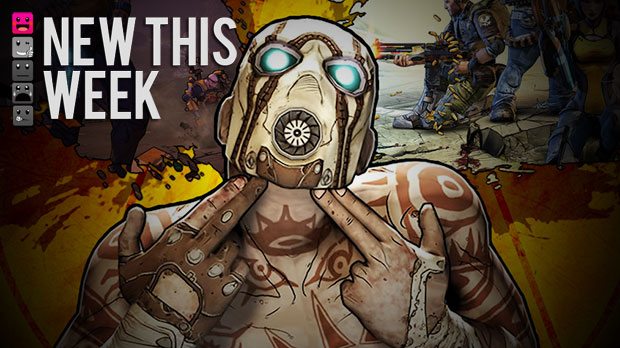 Borderlands 2 – Xbox 360, PlayStation 3, PC – A new era of shoot and loot is about to begin. Play as one of four new vault hunters facing off against a massive new world of creatures, psychos and the evil mastermind, Handsome Jack. Make new friends, arm them with a bazillion weapons and fight alongside them in 4 player co-op or split-screen on a relentless quest for revenge and redemption across the undiscovered and unpredictable living planet.

Torchlight 2 – PC – Torchlight II captures all the flavor and excitement of the original game – while expanding the world and adding the features players wanted most, including online and LAN co-op multiplayer. Torchlight II is fast, fun, and filled to the brim with action and loot. Adventure solo or online with your friends!

F1 2012 – Xbox 360, PlayStation 3 – F1 2012, the next game in the BAFTA-winning series, features the 2012 FIA FORMULA ONE WORLD CHAMPIONSHIP. Begin your career with the new Young Driver Test and take on 2 new game options: Season Challenge and Champions Mode. Experience the next generation of weather system technology, at all the official tracks including the new Circuit of The Americas in Austin, Texas.

Street Fighter 25th Anniversary – Xbox 360, PlayStation 3 – Step into the ring with familiar characters like Ryu and Chun-Li or try your hand at brand new, never before seen fighters! Jump straight into online matches directly from Arcade Mode with an all new online system that mimics the feel of the arcade by allowing other players to challenge you in real time. Show the world what kind of warrior you are.

End of Nations – PC – Join the global war in End of Nations, the massive online strategy game from Trion Worlds and Petroglyph Games. Wage sprawling 56-player battles in real locales, shoulder-to-shoulder with other Commanders. Fight to shatter the grip of the oppressive Order of Nations and ensure your faction prevails. Command, control, customize — with millions of ways to play, the strategy is uniquely yours!

Jet Set Radio – Xbox 360 – Tag, grind, and trick to the beat in SEGA’s hit game Jet Set Radio! Fight for control of Tokyo-to, mark your turf with graffiti, tag walls, billboards, and even rival gang members! Perform tricks and flips on magnetically driven in-line skates, but watch out for the local police force!

Kinect Sports Ultimate – Xbox 360 – This ultimate collection has two best-selling Kinect games wrapped into one – putting 13 great sporting games at your fingertips. So grab your friends and compete for a personal best or jump in and out of the action in team Party Mode! Anyone can play in these controller-free, full-body sports games. With your body as the controller, nothing comes between you and the action!

Home / Game News / New This Week in Video Games | Into The Borderlands, Again