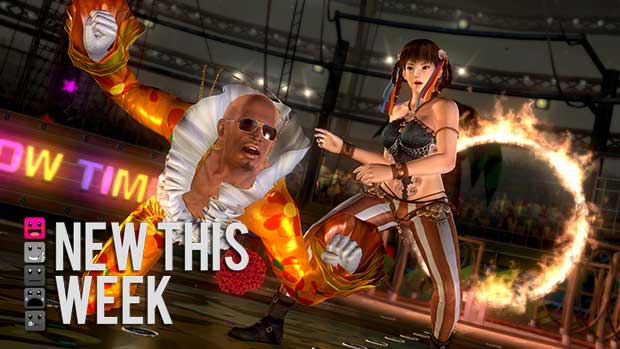 World of Warcraft: Mists of Pandaria – PC – Shrouded in fog since the world was sundered more than ten thousand years ago, the ancient realm of Pandaria has remained unspoiled by war. Its lush forests and cloud-ringed mountains are home to a complex ecosystem of indigenous races and exotic creatures. It is the homeland of the enigmatic Pandaren, a race that celebrates life to the fullest even while under siege by an ancient menace. The new continent reveals itself to a broken world just as the Alliance and Horde are spiraling ever closer to a war that will consume all of Azeroth. Will the mists of Pandaria part to reveal the world’s salvation? Or will the battle to control this rich and breathtaking new land push the two mighty factions over the brink of war and into total annihilation? The answers await within Pandaria’s mysterious shores.

Dead or Alive 5 – Xbox 360, PlayStation 3 – Dead or Alive 5 is the fifth entry in Team Ninja’s iconic fighting series, and is designed to evolve the series beyond eye candy status and into the realm of a more broad-based fighting entertainment. Features include, dynamic interactive stages that challenge combatants, diverse gameplay options both online and in local play, realistic and warm graphics, stunning cutscenes, new special moves and a dream lineup of characters.

Angry Birds Trilogy – Xbox 360, PlayStation 3, 3DS – The Angry Birds franchise sling-shot into the hearts and minds of players with stunning popularity — a billion people have downloaded, enjoyed and become addicted to the adorable, comical games. For the first time ever, Angry Birds are taking flight and crashing their way onto your console with even more features and addictive gameplay than before.

Darksiders II: Arguls Tomb DLC – Xbox 360, PlayStation 3 – Awakened by the End of Days, Death, the most feared of the legendary Four Horsemen embarks on a quest to undo Armageddon. Along the way, the Horseman discovers that there are far worse things than an earthly Apocalypse, and that an ancient grudge may threaten all of Creation. Become the terrifying force which everything fears but nothing can escape. Death Lives in Darksiders II.

The Testament of Sherlock Holmes – PlayStation 3, Xbox 360, PC – Thus begins Sherlock Holmes’ downward spiral. London begins to have doubts and lose its trust in Holmes, who is incapable of refuting suspicions or disproving the charges against him. Even Doctor Watson’s unshakable faith in his friend starts to waver when the famous detective begins to avoid Scotland Yard and displays increasingly strange behavior: night escapades, blackmail, destruction of evidence… Could Holmes go so far as to murder someone?

Pro Evolution Soccer 2013 – PlayStation 3, Xbox 360, PC – With the game tied at zero, minimal time remaining on the clock and the crowd going crazy, you know what your team needs to make a stop here. As the visiting squad, you’re in hostile territory and you know the only thing better than leaving this stadium — is leaving with a victory. Thinking he’s caught the defense napping, the opposing forward makes a pass into a tight fit only to have it go your way. The defender stops the pass and immediately outlets it to you. You sprint up the sidelines, dribbling left and right, avoiding defenders. Your winger sprints on the opposite side of the field — it’s two on one. The goalie comes out to meet you just as the ball leaves your foot and soars through the air toward your teammate. He jumps up and his head connects squarely with the ball — as the energetic crowd goes silent.

FIFA 13 – PlayStation 3, Xbox 360, PC, Vita, PSP, 3DS, Wii – FIFA 13 is the 2012 release in Electronic Arts’ long-running professional soccer game franchise. Based on the current real-life players, teams and leagues associated with the FIFA organization (Federation International de Football), the game aims to present the most realistic international soccer experience available in a video game to-date. Features include, gameplay mechanics improvements on both offense and defense, an extensive roster of players, teams and leagues, multiplayer play options both locally and online, and social network functionality through the EA Sports Football Club.

LittleBigPlanet – PS Vita – In LittleBigPlanet for PlayStation Vita, join Sackboy on a completely new adventure, filled with exploration and competition. Customize Sackboy and the world around you with unique touch and camera Create tools that let you Play with more freedom that ever before. Then discover an endless amount of free games, created and Shared by fans online. LittleBigPlanet for PS Vita is a miniature development kit in the palm of your hand that will allow players to Create a multitude of different experiences—the possibilities are truly endless!

Tokyo Jungle – PlayStation 3 – What happens to man’s best friend, when man doesn’t exist? With humans extinct, pets have gone feral, zoo animals have escaped captivity and wild creatures are ruling the streets of Tokyo – and all are facing a savage battle for survival. As the animal of your choice, you must use your cunning, natural instincts and ruthless aggression to seize territory and escape the jaws of your enemies in this original action adventure game.