The latest news in the world of video games at Attack of the Fanboy
October 7th, 2012 by William Schwartz 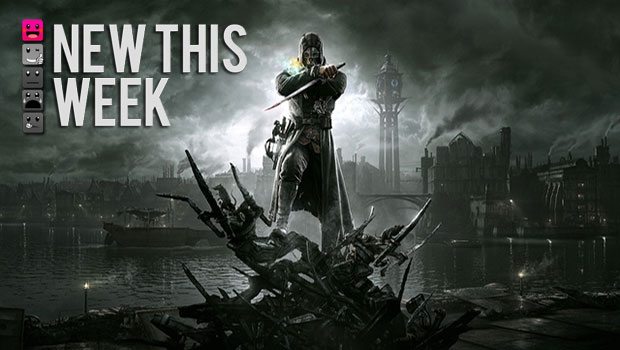 Dishonored – Xbox 360, PlayStation 3, PC – Dishonored is an immersive first-person action game that casts you as a supernatural assassin driven by revenge. With Dishonored’s flexible combat system, creatively eliminate your targets as you combine the supernatural abilities, weapons and unusual gadgets at your disposal. Pursue your enemies under the cover of darkness or ruthlessly attack them head on with weapons drawn. The outcome of each mission plays out based on the choices you make.

XCOM: Enemy Unknown – Xbox 360, PlayStation 3, PC – From the award-winning creators of Civilization comes an action-strategy game about humanity’s last stand. Threatened by an unknown enemy, the Earth’s governments unite to form a secret paramilitary organization, known as XCOM, to combat this extraterrestrial attack. As the commander of XCOM, you control the global defense team in a battle against a terrifying alien invasion. Control the fate of the human race by creating and managing a fully operational base, researching alien technologies, planning combat missions, and controlling soldier movement in battle.

Fable: The Journey – Xbox 360 – Take on the role of Gabriel and defend Albion from the dark Corruption in this legendary story full of Fable’s famously wry humor. Fable: The Journey immerses you in a role-playing experience with a slew of familiar faces and foes. In this action-packed adventure you’ll develop a lasting bond with your horse through an emotion-filled journey.

Just Dance 4 – Xbox 360, PlayStation 3, Wii – he world’s #1 dance game brand is back with Just Dance®4! The latest edition of the record-breaking franchise takes the party to a whole new level of fun with new game modes, brand new features, coaches and stylish environments. Discover over 40 chart-topping hits from “Good Feeling” by Flo Rida, and “What Makes You Beautiful” by One Direction to legendary tracks like “Superstition” by Stevie Wonder.

Happy Wars – Xbox 360 – Happy Wars is a multi-player action game that pits different comic-style characters against each other in over-the-top combat arenas. Taking place in a variety of fantasy battlefields including grasslands, a dark world, and the ocean floor, players can control any of 3 types of characters: warrior, mage, and cleric.

Port Royale 3: Pirates & Merchants – Xbox 360, PlayStation 3 – The Caribbean, in the turbulent 17th Century. The mighty kingdoms of Spain, England, France and the Netherlands fight over the colonies. And there you are, a young sea captain whose only goal is to become the most powerful man in the New World. To achieve that goal, you may choose one of the two available campaigns: will you become an Adventurer or a Trader?

Harry Potter Kinect – Xbox 360 – Experience Hogwarts School of Witchcraft and Wizardry like never before in the all-new Harry Potter for Kinect video game exclusively on KINECT™ for Xbox 360®. Using KINECT capability, scan your face to create a wizard avatar that looks like you – and then play with that avatar in the game.

Spy Hunter – PS Vita, 3DS – Spy Hunter is a reboot of the legendary combat driving series and races forward on its most thrilling and dangerous ride yet. The player once again takes on the role of the “Agent,” the driver of the high-tech G-6155 Interceptor supercar, armed extensively with advanced weaponry, and ready to take on a global terrorist organization set on world domination. The Interceptor seamlessly transforms from supercar to off-road assault vehicle to speed boat, allowing players to go where they like within its branching mission tracks.