New This Week in Video Games | The Original Battle Royale

The latest news in the world of video games at Attack of the Fanboy
November 18th, 2012 by William Schwartz 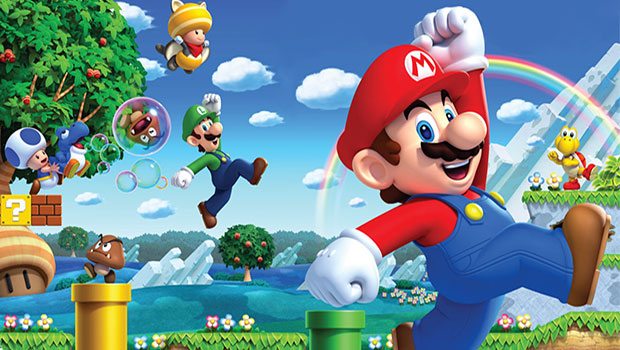 Hitman: Absolution – Xbox 360, PlayStation 3, PC – HITMAN: Absolution follows cold-blooded assassin Agent 47 as he takes on his most dangerous—and personal—contract to date. Betrayed by those he once trusted and hunted by the police, Agent 47 finds himself caught in the center of a dark conspiracy and propelled through a corrupt and twisted world. Donning the suit of this legendary assassin, you become a deadly marksman with the ability to blend into plain sight, kill with your bare hands, and fashion weapons from almost anything. Take on the role of Agent 47 and his many extraordinary talents, then ask: what kind of Hitman are you?

Epic Mickey 2: The Power of Two – Xbox 360, PlayStation 3, Wii, PC – Disney Epic Mickey 2: The Power of Two is an Action-Adventure Platforming game set in the Disney themed gameworld of Wasteland. The game utilizes the same open-ended, environment-manipulating play mechanics of the original Disney Epic Mickey to create a unique experience that lets players create their own paths through game levels. The game features both Mickey Mouse and Oswald the Lucky Rabbit, each with their own tools of environment manipulation. Additional features include, forgotten Disney characters and attractions, all-new levels, professional voice acting, Disney-inspired music and lyrics, and drop-in, drop-out two-player co-op support.

Nintendo Land – Wii U – Nintendo Land is a mini-game compilation specifically for play on Nintendo’s Wii U game console (sold separately). The compilation releases concurrently with the Wii U console, and features 12 Nintendo franchise themed games, referred to as “attractions.” These are set in an interactive theme park environment, and are designed to highlight the functionality of the new console. Additional features include: multiplayer support up to five players in select mini-games, support of Wii Remotes and Wii Remote Plus controllers, and familiar and expanded Nintendo Mii functionality.

ZombiU – Wii U – London is falling! A great plague has enveloped the city in a fog of death. Humanity has been ravaged by infection, the diseased prowl through the streets, waiting to prey on your living flesh at every turn! ZombiU is built from the ground up to take full advantage of the WiiU and its revolutionary New Controller and will test your will to survive in a fear-fueled zombie Survival Horror First Person Shooter. Make every second count; you only get one chance. Stay Human.

Assassin’s Creed III – Wii U, PC – The American Colonies, 1775. It’s a time of civil unrest and political upheaval in the Americas. As a Native American assassin fights to protect his land and his people, he will ignite the flames of a young nation’s revolution.

Persona 4 Golden – PS Vita – With an overall Metacritic score of 90 and a multitude of “Editor’s Choice” and “Best Of” awards, Persona 4 stands as one of the finest games ever made, delivering many dozens of hours of enthralling storytelling, immensely satisfying combat, intricate party management, and addicting Persona collection and customization. Its brilliantly realized story—which features a memorable cast of personalities with whom the player can forge and strengthen pivotal bonds called “social links”—combined with the game’s breathtaking visual and aural design, are part of an overall package that is on almost every genre fan’s list of all-time favorites.

Call of Duty: Black Ops II – Wii U – The most anticipated game of the year and the most ambitious Call of Duty® game ever, Call of Duty®: Black Ops II is coming to Wii U. Call of Duty: Black Ops II delivers the most groundbreaking and viscerally immersive Call of Duty® experience yet. Rooted in near-future fiction, the title propels players into a visual landscape in an epic single player campaign highlighted by branching storylines and non-linear missions; a re-imagined multiplayer that introduces players to some of the most cutting-edge weaponry and equipment that 2025 will have to offer; and punctuated with an all-new Zombies experience running in the multiplayer engine.

Batman: Arkham City: Armored Edition – Wii U – Batman: Arkham City is third-person Action-Adventure game that delivers an authentic Dark Knight experience rooted in an original and engrossing story as well as a combination of melee combat, stealth, investigative and speed-based challenge gameplay. A sequel to 2009’s Batman: Arkham Asylum, Arkham City features the full range of classic enemies seen in the previous game, in addition to Catwoman, who is a playable character and has her own storyline in the new release. Additional features include: a range of new gadgets, an increased number of possible melee opponents and a range of movement options for Batman that include leaping, sliding, gliding and the grapple hook.

Ninja Gaiden 3: Razor’s Edge – Wii U – The solidary Ninja, Ryu Hayabusa, must find a way to lift the deadly curse on his right arm before it destroys him… NINJA GAIDEN 3 has been reworked to bring to Wii U the truly intense, high-speed challenge and action NINJA GAIDEN fans demand. With more weapon and Ninpo types, a new character progression system, a redesigned battle system and the return of dismemberment, NINJA GAIDEN 3: Razor’s Edge improves upon the original NINJA GAIDEN 3 in every way and offers Wii U exclusive features and functionalities.

Rise of the Guardians – Xbox 360, PlayStation 3, Wii, DS – Let your imagination soar in Rise of the Guardians: The Video Game as you play as one of the classic childhood legends, including: North (aka Santa Claus), Tooth (aka the Tooth Fairy), Bunnymund (aka the Easter Bunny), Sandman, and Jack Frost. In this action-packed adventure game, each Guardian has their own set of upgradable and extraordinary abilities that will help you take on the evil spirit “Pitch” and his infectious nightmares.

The Walking Dead: Episode 5 – Xbox 360, PC, PlayStation 3, iOS – The Walking Dead is an award-winning vision of Robert Kirkman’s global hit comic book series. Experience the true horror and emotional impact of being a survivor of the undead apocalypse in a zombie game unlike any other. You will meet people and experience events that will impact the story of Deputy Sheriff Rick Grimes, and you will be forced to make decisions that are not only tough, but that will have a direct effect on the story that you experience. The undead are everywhere, but they’re not your only problem. Starvation, betrayal, heartbreak and more will challenge you as you attempt to survive in the world of The Walking Dead.

Planetside 2 – PC – PlanetSide 2 is a Massively Multiplayer first person shooter that delivers truly epic, massive combat on a scale never before seen in stunning, breathtaking detail. Battles take place not between dozens of troops, but thousands; with air and ground vehicles slugging it out alongside squads of troops. Whether in open fields, tightly-packed urban centers or enormous structures, winning requires strategic teamwork and a quick trigger finger.

Scribblenauts: Unlimited – Wii U – Scribblenauts Unlimited is a side-scrolling Puzzle game with a substantial Action component, in which players use a magical in-game notepad to create objects that are used to complete tasks and challenges that are placed before them. Once created, objects are stored in the game’s object library, and can be resummoned using their given name, and even altered for use later. Additional features include: the return of the series hero, Maxwell, now with a deeper storyline; 4-player game support; hint functionality; crisp HD graphics; and an open world game design featuring themed areas.

Trine 2: Director’s Cut – Wii U – Trine 2 is a sidescrolling game of action, puzzles and platforming. You play as one of the Three Heroes who make their way through dangers untold in a fantastical fairytale world. Physics-based puzzles with fire, water, gravity and magic; Wicked Goblins; Climb the tallest trees and towers in the enchanted forest!

Rabbids Land – Wii U – The Rabbids are now taking over an amusement park and they plan to make the most of their day by invading all of the attractions! Rabbids will make a mess out of everything – see them overrun rides and turn them upside down, or scream bwaaah at a souvenir shop before instigating chaos at an overpriced themed restaurant. Ready to explore a “Rabbidized” amusement park filled with irreverent party games? Grab your Wii U and join them in their crazy over-the-top antics!

Chasing Aurora – Wii U – Chasing Aurora is the first game in a series of 2D aerial action games about the dream of flight. The game is scheduled to launch on Nintendo Wii U in 2012.Ride the wind from peak to peak. Fight for the beacon of light in the hostile environment of the Alps. Fly your bird to victory in this multiplayer action game.

Darksiders II – Wii U – Awakened by the End of Days, Death, the most feared of the legendary Four Horsemen embarks on a quest to undo Armageddon. Along the way, the Horseman discovers that there are far worse things than an earthly Apocalypse, and that an ancient grudge may threaten all of Creation. Become the terrifying force which everything fears but nothing can escape. Death Lives in Darksiders II.

Little Inferno – Wii U, PC – Burn flaming logs, screaming robots, credit cards, batteries, exploding fish, unstable nuclear devices, and tiny galaxies. An adventure that takes place almost entirely in front of a fireplace – about looking up up up out of the chimney, and the cold world just on the other side of the wall.

Sonic & All-Stars Racing Transformed – Xbox 360, PlayStation 3 – Sonic and the All-Stars cast line up on the starting grid once again to battle for supremacy in the ultimate race. It’s not just racing, it’s racing transformed! Fully Transformable vehicles which change from car to plane to boat mid race, each with their own unique gameplay. Over 20 legendary All-Stars each with their own transformable vehicle. A multitude of modes including Grand Prix, Battle Arenas and the incredible World Tour. Unleash ingenious weaponry and your character’s All-Star move to beat the opposition. Race up to ten players online, or challenge your friends in four player split screen.