The latest news in the world of video games at Attack of the Fanboy
January 13th, 2013 by William Schwartz 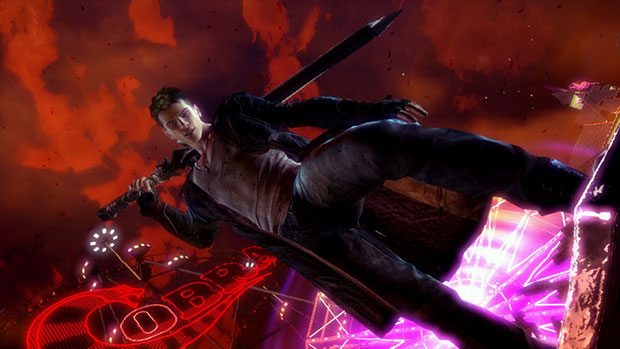 Devil May Cry – Xbox 360, PlayStation 3, PC – Revisit the iconic protagonist, Dante, and other familiar faces of the Devil May Cry franchise and discover the early years that helped define his struggles. Travel with your guide, Kat, whose special psychic abilities allow her access to the demon realm, Limbo. Kat is the right-hand girl to the mysterious leader of The Order — a small group of freedom fighters trying to end the demon occupation of the human world. The Order needs one more recruit to help wipe out the demons — Dante. Enjoy the same stylish action and fluid combat you’ve come to expect with a game that perfectly complements the franchise’s intense combat and features superb character design, storytelling and cinematics. Battle in intense and iconic sword- and gun-based combat with all-new weapons designed to send each demonic spawn you encounter back to Hell. Use Dante’s Angel and Demon powers to chain together ground-based and aerial combos and achieve the best style rankings. Experience what it means to be both Angel and Demon, and show the world the wrath of an outcast.

Borderlands 2 “Sir Hammerlock’s Big Game Hunt – Xbox 360, PlayStation 3, PC – What starts off as a relaxing hunting expedition with Sir Hammerlock soon takes a sinister turn as our Vault Hunters stumble across a new villain intent on restoring the legacy of Handsome Jack. Irresistible new loot, memorable new quests, a variety of challenging and exotic new enemies, a new vehicle and more await players as they fight their way through the never-before-seen lands of Aegrus to give this evil-doer the old one-two!

Black Ops 2 “Nuketown Zombies – PlayStation 3, PC – Nuketown Zombies is set during the events of Moon, and after the end of the multiplayer level from the original Black Ops game. A group of radiation scientists are investigating the Nuketown remains and discover soldiers that have been revived by Element 115 from a nearby Nevada base. The zombie soldiers attack the radiation scientists and turn them, and after receiving a distress signal, the base in Nevada sends in CIA and CDC agents to investigate. Upon arrival in Nuketown the agents lose communication with Hangar 18 and become stranded…setting the stage for Nuketown Zombies.

Bioshock: Ultimate Rapture Edition – Xbox 360, PlayStation 3 – Set during the fall of Rapture, players assume the role of Plasmid test subjects for Sinclair Solutions, a premier provider of Plasmids and Tonics in the underwater city of Rapture. Players will need to use all the elements of the BioShock toolset to survive as the full depth of the BioShock experience is refined and transformed into a unique multiplayer experience that can only be found in Rapture.