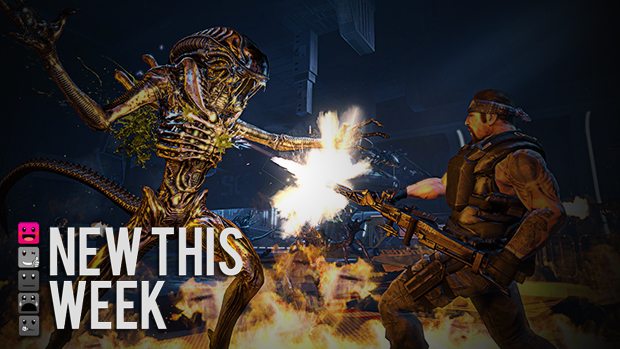 Aliens: Colonial Marines – Xbox 360, PlayStation 3, PC – Aliens: Colonial Marines is a First-Person Shooter set in the Alien movie franchise universe in which the player takes on the role of a member of a squad of colonial marines sent to the planet LV-426. The game is designed as a true sequel to the 1986 movie, Aliens, done in video game format, and features iconic locations, weapons and alien varieties from Aliens and other movies in the series. Additional features include: four-player co-op functionality, a new alien type, and customizable weapons.

The Elder Scrolls V: Skyrim “Dragonborn” – PlayStation 3 – With this official add-on for The Elder Scrolls V: Skyrim, journey off the coast of Morrowind, to the island of Solstheim. Encounter new towns, dungeons, and quests, as you traverse the ash wastes and glacial valleys of this new land. Become more powerful with new shouts that bend the will of your enemies and even tame dragons. Your fate, and the fate of Solstheim, hangs in the balance as you face off against your deadliest adversary – the first Dragonborn.

Ecolibrium – PS Vita – Grow your world by hunting fantastical creatures from the environment around you using GPS or, if you prefer, you can sell or buy them in the online player-to-player auctions. It’s all in aid of giving your eco-system the perfect harmony, so don’t be shy! And if you’re competitive, try online challenges and climb up the global leaderboards.

Omerta: City of Gangsters – Xbox 360 – OMERTA – CITY OF GANGSTERS puts you into the boots of a fresh-from-the-boat immigrant with dreams of the big life. Work your way up the criminal hierarchy of 1920’s Atlantic City, starting with small jobs, recruiting new gang members and expanding your empire by taking territory from other mobsters. Establish your own crime syndicate and become the de facto ruler of Atlantic City! Features: – Under the Boardwalk – Conquer a historically accurate Atlantic City with 20 unique districts featuring real-world landmarks in a story-driven campaign or sandbox freeplay game – Craft a criminal empire – Strategic real-time gameplay for planning coups, expanding your territory.

Rocketbirds – Hardboiled Chicken – PS Vita – Set out on a mission to assassinate the totalitarian penguin leader as Hardboiled Chicken. Destroy enemies with a slew of weapons and illuminate the secrets to his past while uncovering the real enemies of Albatropolis. Master fowl play in the co-op campaign as a pair of Budgie commandos on a mission to save the general’s daughter. Many lives will be destroyed, countless penguins will die!