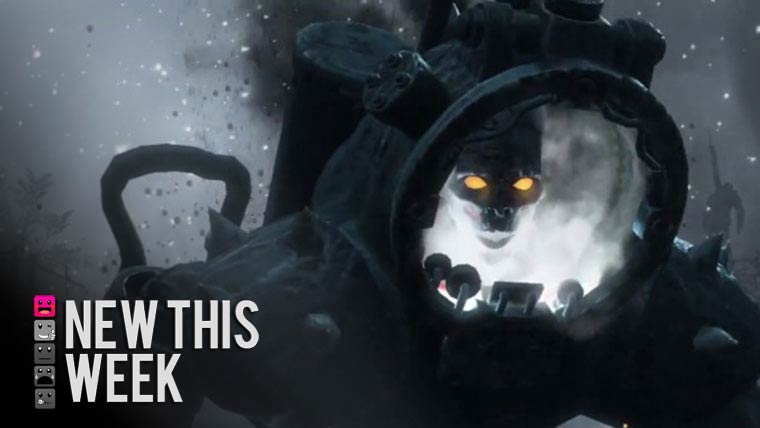 Scribblenauts Unmasked: A DC Comics Adventure – Wii U, 3DS, PC – Scribblenauts Unmasked – A DC Comics Adventure is a new game that melds the boundless creativity of the award-winning video game franchise with thousands of DC Comics characters and objects across DC Comics worlds – all drawn in the classic Scribblenauts art style. The game features a story where players embark as protagonist Maxwell on an imaginative and comical quest, taking them through Gotham City, Metropolis, Atlantis and other iconic locales from the DC Comics universe. Fueled by the player’s imagination, Maxwell must use his magic notebook to put a stop to the villains’ evil schemes and save the day!

Girl Fight – PlayStation 3 – Developed by Kung Fu Factory, Girl Fight is an arcade-style 3D fighting game featuring a cast of woman warriors who have been abducted by a shadowy corporation to experiment on the potential Psi Powers of these deadly ladies. As part of their virtual reality experimentation, each fighter creates a unique arena based on their respective life memories bringing a vivid backstory for each character.

Armored Core: Verdict Day – Xbox 360, PlayStation 3 – Command a squadron of fully customized Armored Core Units in a dystopian future ravaged by war and stripped of its natural resources; The last remaining resources needed for the survival of your faction are scavenged and bitterly fought for in the No Man’s Land, a bleak landscape that offers little hope for survival. Enlist into one of the various in game factions and strategically adapt your weapon systems to wrestle control of territories away from other players and establish a much needed peace. A heavy trigger finger, innovative customization and tactical teamwork will be all that stand between survival and total annihilation in Armored Core: Verdict Day.

Shadow Warrior – PC – Shadow Warrior is a bold reimagining of the classic 3D Realms’ shooter from independent developer Flying Wild Hog (Hard Reset) starring the legendary and quick-witted warrior Lo Wang. Combine the brute force of overwhelming firepower with the elegant precision of a katana to annihilate the merciless armies of the shadow realm in an exhilarating and visually stunning transformation of the classic first-person shooter.

Alien Rage – PC – Unleash a fury of powerful weapons as you blast your way through armies of Alien forces hell-bent on taking you down! Battle through 14 intense levels and prepare to face a barrage of beastly-sized bosses that will test your every skill. Each of your 10 weapons comes with two firing modes and you’ll need all of them!

Teenage Mutant Ninja Turtles: OOTS – PlayStation 3 – Teenage Mutant Ninja Turtles: Out of the Shadows takes you back to how it all began. Be the four Turtles Leonardo, Donatello, Michelangelo, and Raphael in the fight to save New York City from mutants, the Foot and Shredder. With seamless co-op, along with team combo moves and relentless combat, this is the game fans have been waiting for.

Rise of Venice – PC – Venice was at the peak of its power during the Renaissance and was viewed as a city of decadence, beauty and intrigue. Renowned as the linchpin of civilization and the cultural centre of Europe, Venice was the most important trading post between Western Europe and the eastern stretch of the Mediterranean Sea. It was also the stage for political corruptions and clandestine dealings.

FIFA 14 – Xbox 360, PlayStation 3, PS Vita, Wii – Experience the emotion of scoring great goals in FIFA 14. The game plays the way great soccer matches are contested, with innovations to the award-winning gameplay that inspire fans to build play through midfield, dictating the tempo of a match. Feel the tension as chances are created, and experience the thrill of hitting the back of the net. A new feature called Pure Shot and a brand-new ball physics system will transform shooting, making every shot attempt feel real, and when players connect with the perfect strike, feel exhilarating. FIFA 14 delivers engaging online features and live services that connect fans to the heartbeat of the sport – and to each other – through EA SPORTS Football Club. FIFA 14 is soccer’s social network, where fans connect, compete and share with millions of others around the world.