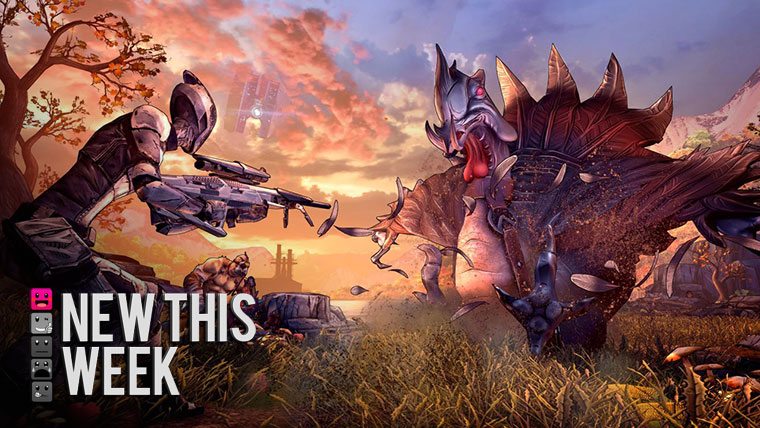 Borderlands 2: The Horrible Hunger of the Ravenous Wattle Gobbler – Xbox 360, PS3, PC – In the second Headhunter add-on, Mr. Torgue hosts a hunger-themed competition to hunt down a giant turkey, the Wattle Gobbler, and selects sacrificial recruits from all of the districts of Pandora to participate!

The Wolf Among Us: Episode 2 – Xbox 360, PS3, PC/Mac – The Wolf Among Us is a five episode series from the creators of the 2012 Game of the Year: The Walking Dead. Based on Fables (DC Comics/Vertigo), an award-winning comic book series, it is an often violent, mature and hard-boiled thriller where the characters and creatures of myth, lore and legend are real and exist in our world.

Ys: Memories of Celceta – PS Vita – In Ys: Memories of Celceta, developer Falcom revisits the land and characters of Japanese cult favorite Ys IV for its first ever North American debut. This re-envisioning of the fourth installment in the Ys series takes a brand new approach, changing and framing the story of Ys IV within an all-new tale of conspiracy, deception and mystery. Featuring an updated version of the party-based battle system from Ys Seven, as well as the largest and most varied overworld in series history, Ys: Memories of Celceta brings a greater sense of adventure to the Ys universe than has ever been seen before.

Super Motherload – PS3 – Set on Mars in an alternate Cold-War era, Super Motherload is a 1 to 4-player couch co-op digging adventure with storyline by Image Comics’ Kurtis Wiebe, a fully voiced cast of Soviet and American characters, and a procedurally-generated world that changes each time you play. Purchase powerful upgrades and supplies for your mining pod as you progress and prosper, as well as rare special abilities with random availability.

Painkiller: Hell & Damnation – Xbox 360, PC, PS3 – Evil has returned! Demonic powers are manifesting themselves as a myriad of dark creatures, fighting over the fates of imprisoned souls caught in Purgatory. Once again, it is up to Daniel Garner, in the unenviable position of being the Curse of Darkness and the Toy of Light, to fight his way past hordes of demons and fiends. Questions remain. “Can he stop the powerful creatures that stand in his way? Will he ever leave the hell of Purgatory and be reunited with his wife Catherine?” Painkiller Hell & Damnation is a fast-paced, thrilling modern remake of an all-action shooter Classic!

Saint Seiya: Brave Soldiers – PS3 – Five mystical warriors have become the Saints, guardians for the reincarnated Goddess Athena as she fends for the world against the ancient Olympian Gods. To the aid of the Saints, each have donned magical armor derived from various stellar constellations; through this, all five ban together to wage war against the Gods with the powers of the Cosmos.