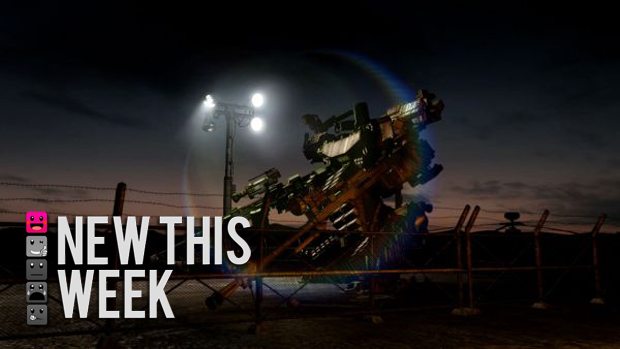 Kid Icarus: Uprising – 3DS – Medusa has been resurrected and is gathering the underworld forces of darkness to fulfill her ambition. You play as an angel named Pit who is bestowed the power of flight from Palutena, the Goddess of Light. Repel the Medusa’s underworld army with your choice of an array of weapons like: Blades, Claws, Bow, Cannon, Mace, Staff and others that you will discover along your journey. Multiplayer mode allows for competitive gameplay locally or over a wireless Internet connection. Its time for Medusa to meet the power of light and only you can guide Pit to victory!

Armored Core V – PlayStation 3, Xbox 360 – The ARMORED CORE series is renowned in the mech action genre for its intense one-on-one battles and customization options. ARMORED CORE V is a new entry that revolutionizes the series with more content than the previous games, a completely new atmosphere, and a robust offline mode. In addition, the online mode has been newly designed to focus on huge team-based battles on a global scale.

Ninja Gaiden 3 – PlayStation 3, Xbox 360 – Ninja Gaiden 3 is an Action-Adventure game in which players take on the role of the iconic video game ninja, Ryu Hayabusa. The Ninja Gaiden game series has a long history stretching from the original 1980’s arcade classic, all the way through more recent games developed for Next Generation consoles by the legendary Tecmo-Koei game development group, Team Ninja. Ninja Gaiden 3 embraces the evolution of the series by incorporating gameplay scenarios new to the franchise, such as a closer look at the backstory of Ryu Hayabusa, the blending of realistic and modern combat situations with classic ninja warrior skills, more accessible yet still challenging gameplay and franchise first multiplayer game options.

Shogun 2: Fall of the Samurai – PC – The standalone expansion to the award winning Total War: SHOGUN 2 explores the conflict between the Imperial throne and the last Shogunate in 19th century Japan, 400 years after the events of the original game – a dramatic clash of traditional Samurai culture with the explosive power of modern weaponry.

Kinect Rush – Xbox 360 – Kinect Rush: A Disney Pixar Adventure, invites families and fans of all ages to experience the worlds of five beloved Disney Pixar films like never before. Through the magic of Kinect for Xbox 360, scan yourself into the game to become a unique character in five Pixar worlds.

Warriors Orochi – PlayStation 3 , Xbox 360 – Warriors Orochi 3 combines the much loved heroes of the Dynasty Warriors and Samurai Warriors series in an all new story that for the first time also features characters from Ninja Gaiden, Warriors: Legends of Troy, Bladestorm, Trinity: Souls of Zill O’ll and Dead or Alive! The game also introduces the bond system, where the bonds between characters can be increased by interaction in banquets, fighting together as allies, rescuing struggling allies, and accepting then clearing missions in battles.