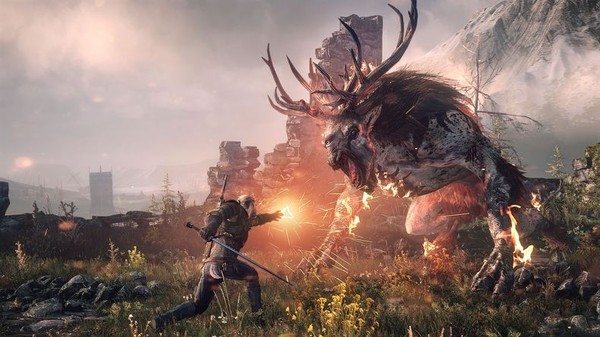 Since E3 2013 there hasn’t been much more talk about what to expect from the next installment in The Witcher series. Until a preview from Player Attack released a bit of information which fans of The Witcher series can now look forward to, when they revealed a new scenario from The Witcher 3: Wild Hunt. The representatives were able to see a 40 minute peak into the newly revealed world of Wild Hunt where the game’s creators highlighted what to look forward to when the game debuts next year,  from new features, the new engine, to the story.

Part of what makes Witcher games so successful is their ability to take the concept of an open world RPG and still immerse the player with impressive story-lines and exciting choices which aren’t necessarily morality based. In an interview back in June durning E3, CD Projekt Red’s John Mamais took the time out in an interview with Gamereactor to explain how the team working on The Witcher 3 geared their sights towards creating an even more intricate and impressive story-line to propel the franchise forward. Wild Hunt plans to end Geralt of Rivia’s story as the most capable monster hunter, but not by linearly following where The Witcher 2 left off. Instead, CD Projekt Red plans to take a more personal look into the hunter’s life, and to end the series.

In the divulged scenario, Geralt must enter into a village which has been torn apart by an angry creature. The villagers have been wiped-out, with the exception of one man, due to the inability for the villagers to sacrifice enough in order to pacify the beast, revered by the locals as a spirit. A choice comes to the player by way of local youth and elders, the latter  advises Geralt to leave the area. Alternatively, the younger locals wish for the player to slay the monster. By using his Witcher Senses, Geralt can track down the creature. The Witcher Sense mode will allow the player to see the world through heightened senses, highlighting clues which with normal sight, would be hidden. When the deity is tracked down the two will battle to the death.

This newest scenario shows a fraction of the kinds of choices players can anticipate from Wild Hunt, as well as an idea of how the RPG elements will flow into combat. During the reveal, CD Projekt Red bragged about the mechanics and precision being on par with that of a “dedicated fighting game” unheard of with titles of this scale. The Witcher 3 will be up to 35 times larger than the last installment, and is highly anticipated by the gaming community since its official announcement during the Xbox Reveal. There is still no official release date for the title, however it is expected to hit stores in early 2014.