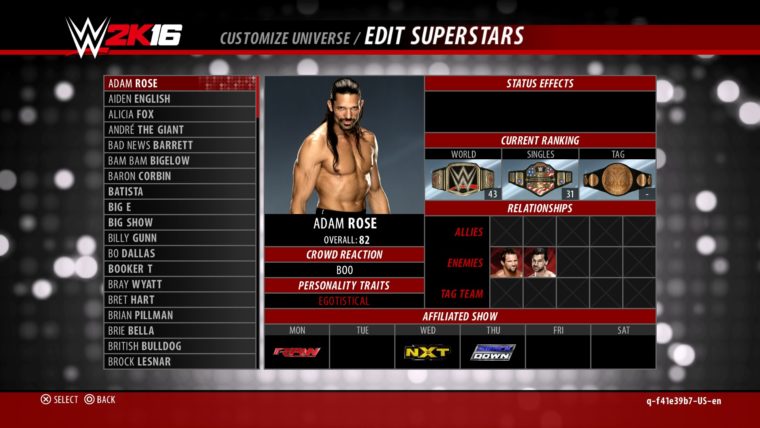 2K Games has now posted an extensive blog post about all of the new things they have added to the Universe mode in WWE 2K16.

First of all, 2K Games has overhauled the match generation system for WWE 2K16. In past games, match cards were all similar. Now in this new game, you should be seeing different match types all the time. You can also assign wrestlers to multiple shows after that.

Another change is that you will see much more cutscenes in this year’s Universe mode too. The focus has been on quality over quantity too. There will be up to ten branching storylines that might be possible for wrestlers after a PPV has concluded.

2K Games also added a new personality trait to the wrestlers too. This will influence their actions in Universe mode. In the default setting, these traits mirror what you see in WWE programming, but you are free to alter them if you wish.

Status effects are also here and injuries can occur too. Wrestlers can still compete through injuries, although they will be out of commission if it gets severe. You can target limbs during matches if you want to take someone out like The Miz or something like that.

The final change in WWE 2K16 is that it’s easier to track rivalries now. A new screen pops up after a rivalry match finishes.