The WWE 2K17 roster is getting bigger as now we have confirmation of several NXT stars making their debuts in a video game. Not to mention a very cool special edition has been announced. 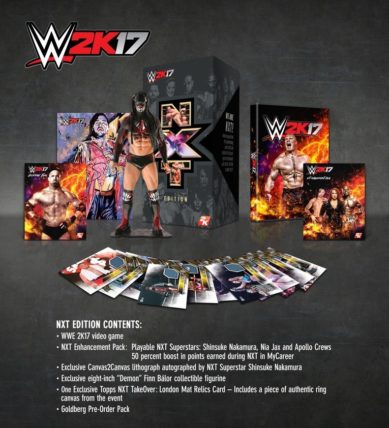 2K Games announced today the special WWE 2K17 NXT Edition. This bad boy is available for the PS4 and Xbox One versions of the game and retails for $100. It is worth getting if you are a huge fan of the NXT brand.

The special edition comes with the NXT enhancement pack. This includes three playable NXT stars Shinsuke Nakamura, Nia Jax and Apollo Crews. It also has 50 percent boost in points when you play through the MyCareer mode in NXT.

You also get a lithograph image of Shinsuke Nakamura signed by the man itself. The oddest additions are NXT Topp cards that actually feature a piece of the ring from NXT Takeover: London.

Lastly, my favorite addition is the 8 inch statue of Finn Balor. You also receive the Goldberg pre-order pack too. There are only 50,000 copies of these available worldwide so get your pre-orders in now.