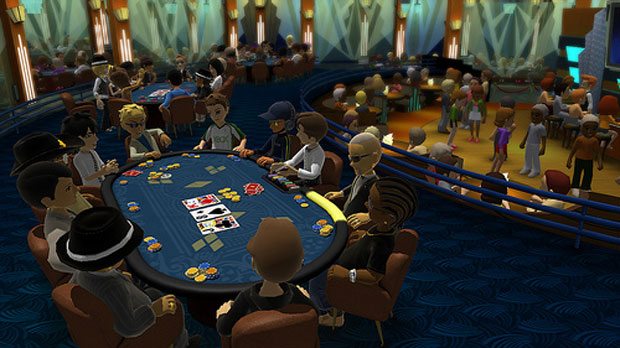 Coming to Xbox Live in the Spring is Full House Poker.  Riding the success and relative popularity of  1 vs. 100, Microsoft is introducing this new game in the same build as the avatar based party game.  Full House Poker is, you guessed it, a poker tournament for Xbox 360 avatars.  Competing with up to 29 other competitors of the real and a.i. assisted variety, Full House Poker is a promising new application for the Xbox 360 coming in the Spring.

Keeping players coming back to the tables will be key.  And Microsoft has plenty of prizes to give away, avatar props, customizable in-game goods, as well as an exp ranking system that Microsoft introduced to Kotaku at the C.E.S. last week should do the trick.  Full House Poker will also include full integration with Windows Phone 7 so if you are away from your Xbox, you can still grind out a tournament victory on the go.