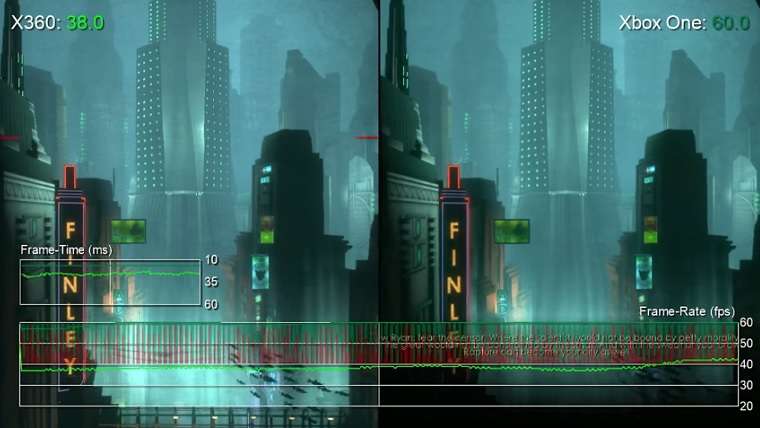 The original BioShock trilogy got plenty of upgrades thanks to the recent remasters in the form of BioShock: The Collection, but those who still want to play the original versions of the games will get some upgrades when playing on Xbox One. The BioShock games recently received backwards compatibility support on Xbox One, and now Digital Foundry has released a video where they analyze the performance of the first two games.

While you typically get a slight performance boost no matter what Xbox 360 game you play on Xbox One, things seem to have worked out very well for the first BioShock game. In fact, the game is actually able to reach 60fps occasionally, though even its average fps is higher than what the original game was. BioShock 2 also gets some slight enhancements when playing on Xbox One, though the improvements aren’t nearly as big as the first game. You can check out the performance analysis video at the bottom of this post.

With the release of BioShock: The Collection earlier this year, many were worried that it meant that backwards compatibility support would not be coming to the original versions of the games. While you won’t be getting the same performance boosts as you would with the new versions, it’s good to know that those original copies can still be put to good use.

It was with the release of the BioShock trilogy getting backwards compatibility support that put Microsoft’s backwards compatibility catalog over 300 games last week. The company had been aiming to get to that number by the end of the year, though they’ll now end up well over that number when 2016 finally comes to a close. The company hasn’t yet stated how many more games they’ll be looking to add in 2017, but with the pace they’ve been going on we’ll definitely be getting many more.