The latest news in the world of video games at Attack of the Fanboy
October 19th, 2014 by William Schwartz 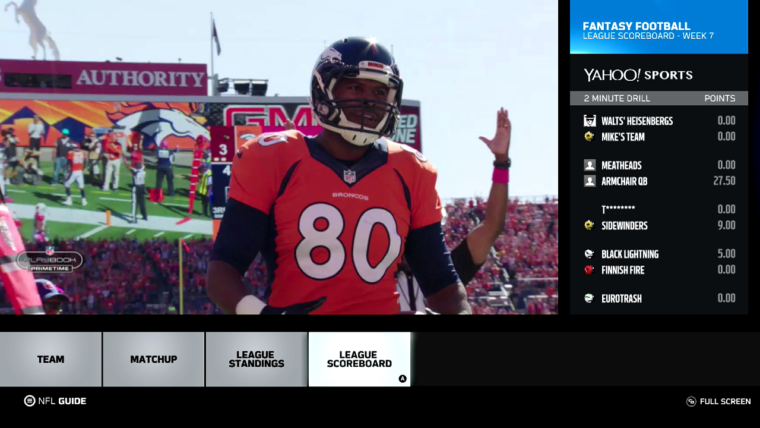 Fantasy Football players who were hoping to utilize the Xbox One NFL app to track their fantasy stats in Yahoo Fantasy Football leagues were a little disappointed when the app lacked the functionality at the start of the season.

It looks like Microsoft and Yahoo have gotten any issues with the app fixed, as Yahoo Fantasy functionality is now integrated into the Xbox One NFL app. Set up is easy, and very similar to the processes for NFL and CBS Leagues.

The Yahoo functionality tracks your team’s points, match-up, and league standings and scoreboard.  It’s assumed that it will also offer pop-up notifications when plays occur that impact your team.

Earlier this year, when the NFL Xbox One App did its big relaunch for the new season, the Yahoo Fantasy functionality appeared and then mysteriously vanished.  Obviously, there was something wrong with the app that prohibited it from being available for the first six weeks of the season.

The NFL App on Xbox One allows fans to track Fantasy Football scores across a number of different leagues (NFL.com, CBS Sports, and now Yahoo), watch live highlights of NFL games, Redzone Channels, NFL Rewind Games, and 24 Hour Coverage on the NFL Network.  For those who spend a little extra, they can get the NFL Sunday Ticket streaming content, which offers all the games, a live red zone scoring channel, and a dedicated channel for fantasy football analysis.