The latest news in the world of video games at Attack of the Fanboy
April 6th, 2017 by Dean James 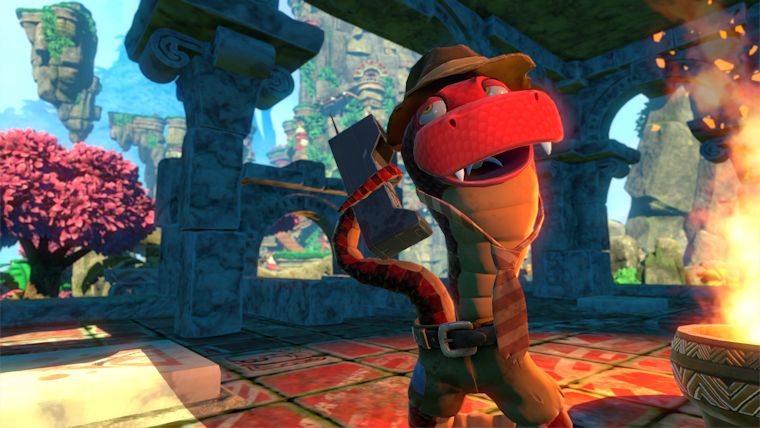 Yooka-Laylee has been a much talked about game ever since it was the fastest game to ever reach $1 million on Kickstarter and the release is almost here. As you can see in our review that went live earlier this week, we quite enjoyed Yooka-Laylee, though it wasn’t without its faults. Thankfully, Playtonic Games has revealed that the game will have a day one patch that is supposed to address some of these issues.

Getting back most of the former team from Rare to work on Yooka-Laylee at Playtonic Games was definitely a good decision, as they knew exactly how to make a true spiritual successor to the Banjo-Kazooie series. This allowed the game to be just what people wanted in some ways, though it also led to some performance and camera issues that Playtonic is looking to fix.

Playtonic has revealed that Yooka-Laylee will be getting a day one patch for its release on April 11 that will include fixes for the following:

[Fixed] Camera will become locked in place after completing Gravity Room challenge in Galleon
[Fixed] Grappling the seeds as they break in Planker’s challenge causes erratic behaviour in Moodymaze Marsh
[Fixed] Game softlocks and has to be reset if the player leaves the course and faints during the Nimble race in Tribalstack Tropics
[Fixed] Softlock will sometimes occur on the Hub C slide if the player faints at the same moment as the timer reaching zero
[Fixed] If the player leaves Brreeeze Block’s room in the Icymetric Palace in Glitterglaze Glacier but remains in the world and returns to the same room then the isometric camera will be deactivated
[Fixed] If player is killed by a bizzy in hub B and knocked back into the archive door at the exact same time, the screen will still transition. When the player respawns, they will be unable to move
Performance improvements to various camera transitions in the introductory cut scene
Performance improvements to Shipwreck Creek and Hivory Towers. Various areas have been improved including camera movement
Performance improvements when using the light beam in the Icymetric Palace within Glitterglaze Glacier
Performance improvements during the House of Cards ball roll course in Capital Cashino
Performance improvements in the Bee-Bop arcade game

This is good to see so quickly, though the camera fixes being limited to only a few areas definitely means we’ll still have some issues with that. The problems being fixed in this patch will make the game smoother overall and hopefully they will continue with updates post-release as well.