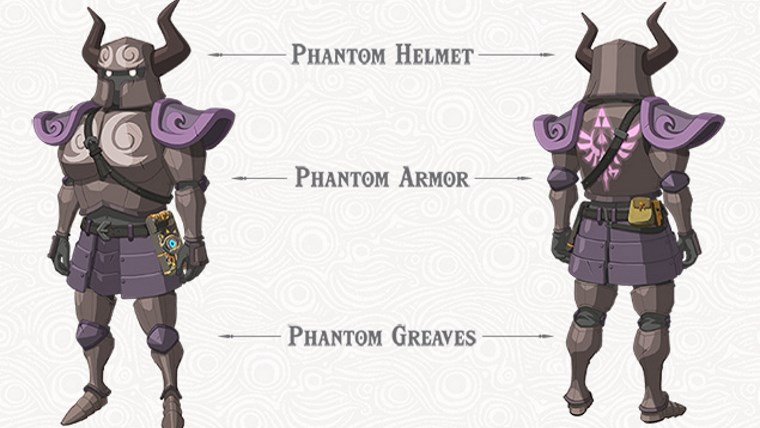 The Legend of Zelda: Breath of the Wild DLC Pack 1 hits June 30th for Wii U and Switch versions of the game. As we inch closer and closer to its release Nintendo is taking the time to count down by offering up new details about what’s contained in the highly anticipated expansion. Today they broke down the Phantom Armor, and this might just be your new favorite set.

The Phantom Armor in Breath of the Wild is a nice little callback to the two DS entries in the series. The Legend of Zelda: Phantom Hourglass and Spirit Tracks both featured these guys, who were unbeatable in combat. Instead players had to avoid them or use specific abilities, such as Zelda’s possession, in order to move forward. However you got by, these were tough enemies and their new armor fits that description as well.

“If you wear this Phantom armor in The Legend of Zelda: Breath of the Wild, it will increase Link’s attack power,” says Daiki Iwamoto, Assistant Director for BOTW. The armor also just looks cool, making Link appear just like the Phantoms from the DS titles.

As Iwamoto points out, the Phantoms served a similar gameplay purpose as Guardians do in this latest game. “Link would actually die with just one attack from a Phantom, so it required Link to advance through The Temple of the Ocean King by hiding from them and sometimes using traps to his advantage. Come to think of it, that’s somewhat similar to his relationship with Guardians, isn’t it?”

This is just the first set of DLC, with Breath of the Wild DLC Pack 2 looking like the bigger one of the two. That will come later this year though, so enjoy DLC Pack 1 while you wait for more story content and much, much more.