The latest news in the world of video games at Attack of the Fanboy
November 9th, 2014 by Danny Vittore 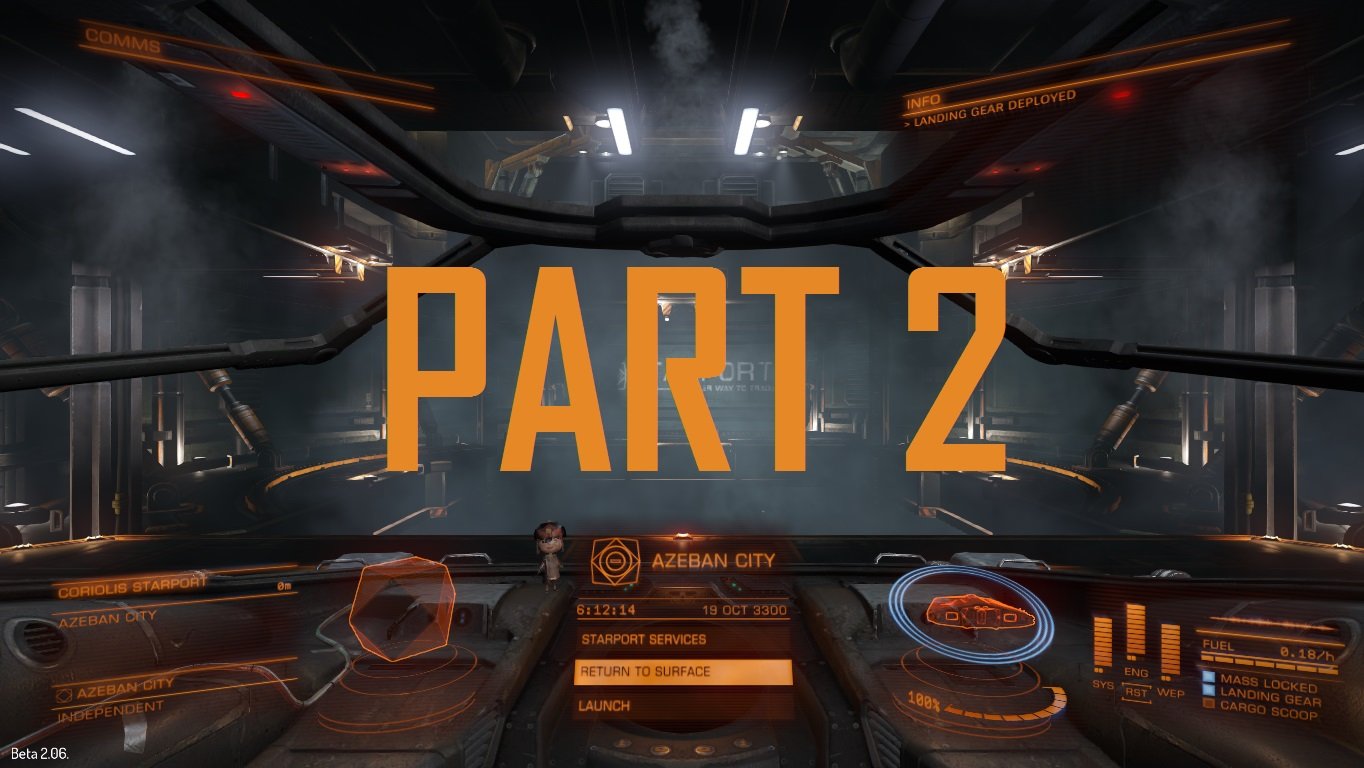 Elite Dangerous is a space combat, exploration, life simulation game being made by Frontier Developments, the studio run by David Braben (one of the creators of the original Elite series). It is currently in the last phases of the closed premium Beta which you can join by buying the special beta pack.

To give you a better idea of what to expect in Elite Dangerous, Danny will take up the role of Commander Vittore and tell us of his adventures and shenanigans in the Elite Dangerous beta. If you want to start from the beginning, click here for part 1!

Note: Phase 3 of the beta has already come out, but this playthrough was played in the earlier phase 2 build. Sorry about that, but Danny has just been really busy with some other things. Expect phase 3 things soon!

When we left off last time, I was making my way back to Azeban Orbital to rethink my life in Elite Dangerous. Unfortunately, being a small orbital platform, Azeban Orbital was full, or at least wouldn’t accept my request to dock, thus I decided to make my way to Azeban City instead. I’m going to make it big in the city.

Once I had entered the hangar and landed, I proceeded to sit there in my docking bay at Azeban City pondering my next actions. It didn’t take me long to realize that no matter what I wanted to do in the future, I was going to need more credits now. And while philosophy and thinking is all nice and good, it doesn’t really bring in the moolah. Thus I abandoned the day-dreaming and headed straight to the bulletin board (again) to find some meaningful work. 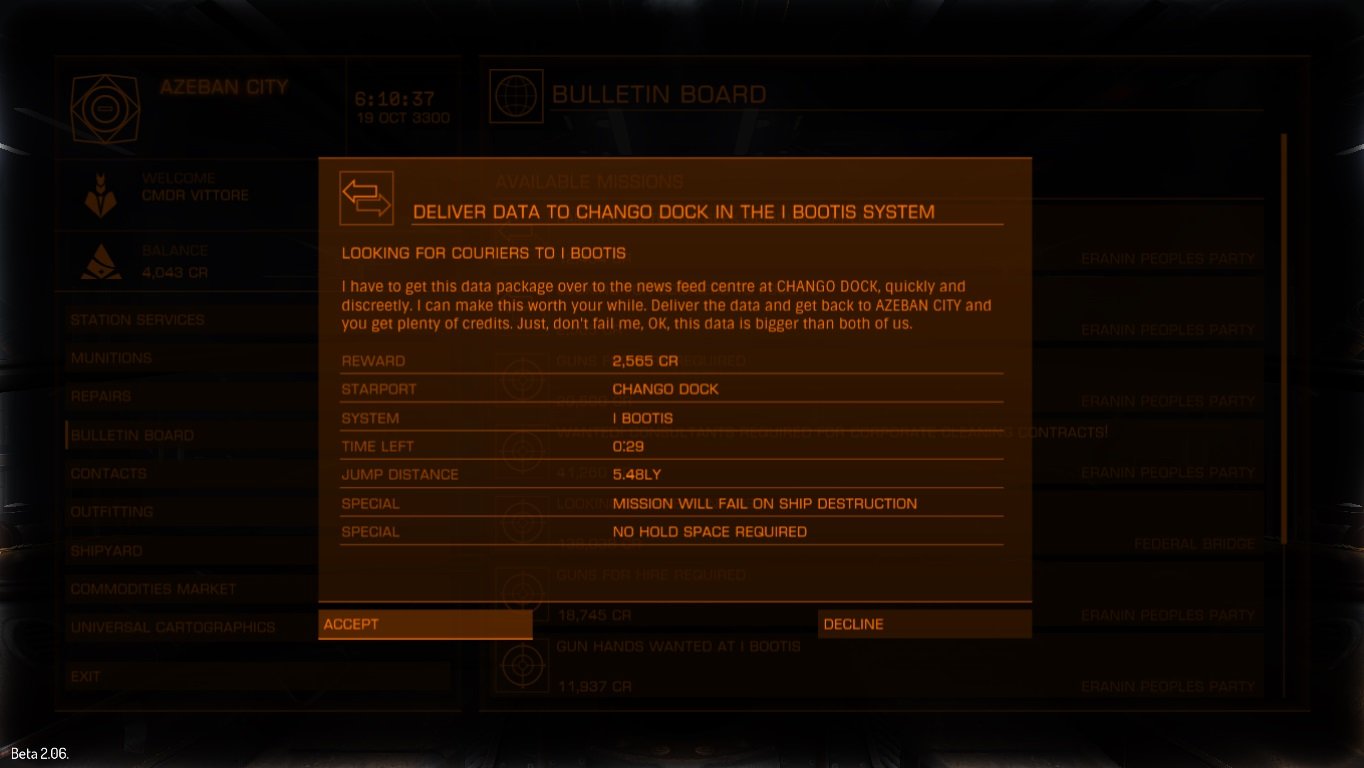 Naturally, I found some enterprising, but nervous-looking chap who had some data he needed couriering (totally a word, my spell-checker agrees!) to Chango Dock in the I Bootis system. After giving a few hearty chuckles at the name “I Bootis,” I picked up a few other propaganda delivery jobs that were also heading for Chango Dock, because it seems like there just can’t ever be enough propaganda in this here parts, and set off for my destination.

However, I’m now a much wiser spacer, then in the previous part, as I had finally figured out (with some help from the internet) how to use the galactic map to figure out where I was likely to get some performance enhancers (or any other resource in Elite Dangerous) for another prospective bulletin board job, as opposed to just using the galactic map as a very fancy way to set my next jump destination. 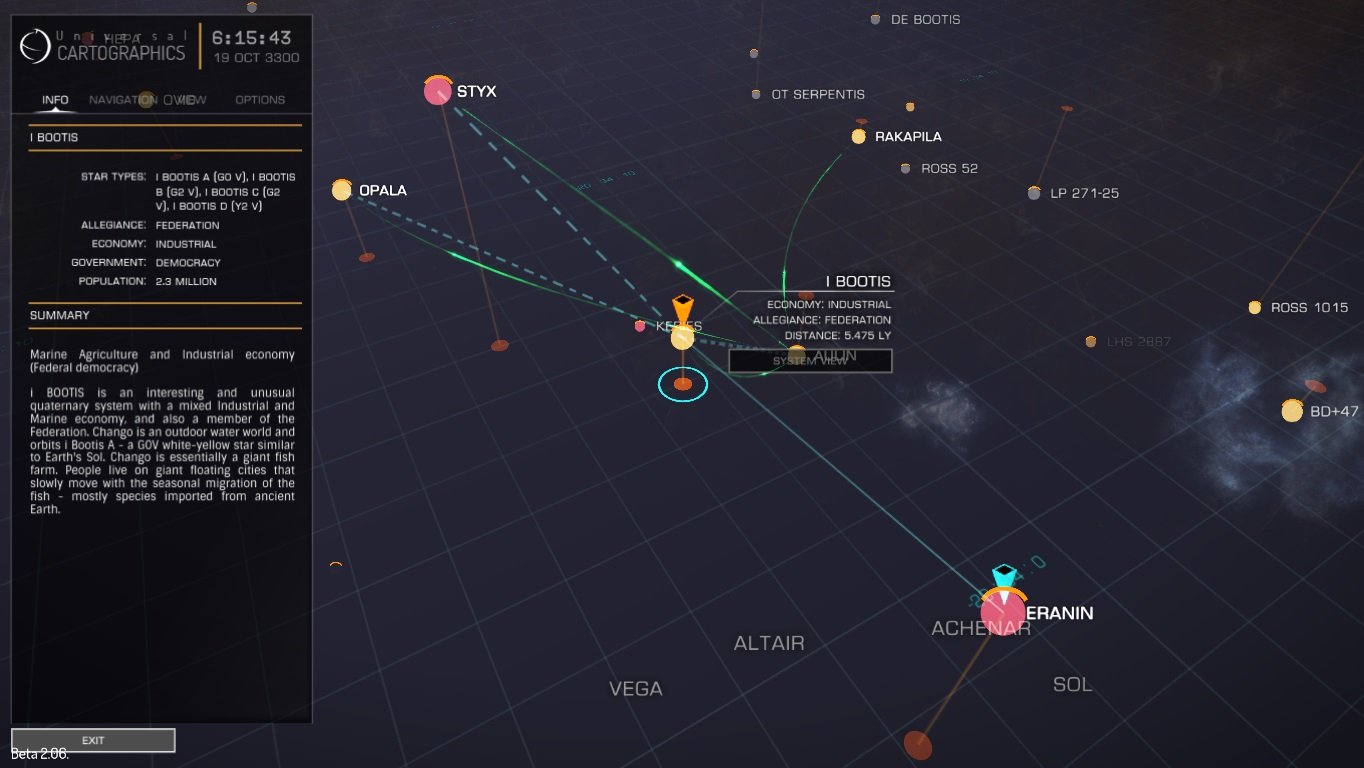 While I saw that performance enhancers were definitely available in the Styx system, (which just smells of deja vu) which was one of my planned future destinations, I decided against running that particular job because buying even one ton of performance enhancers would have brought my cash down to effectively zero and it’s never a good idea to have no cash on you, in Elite Dangerous and in real life. 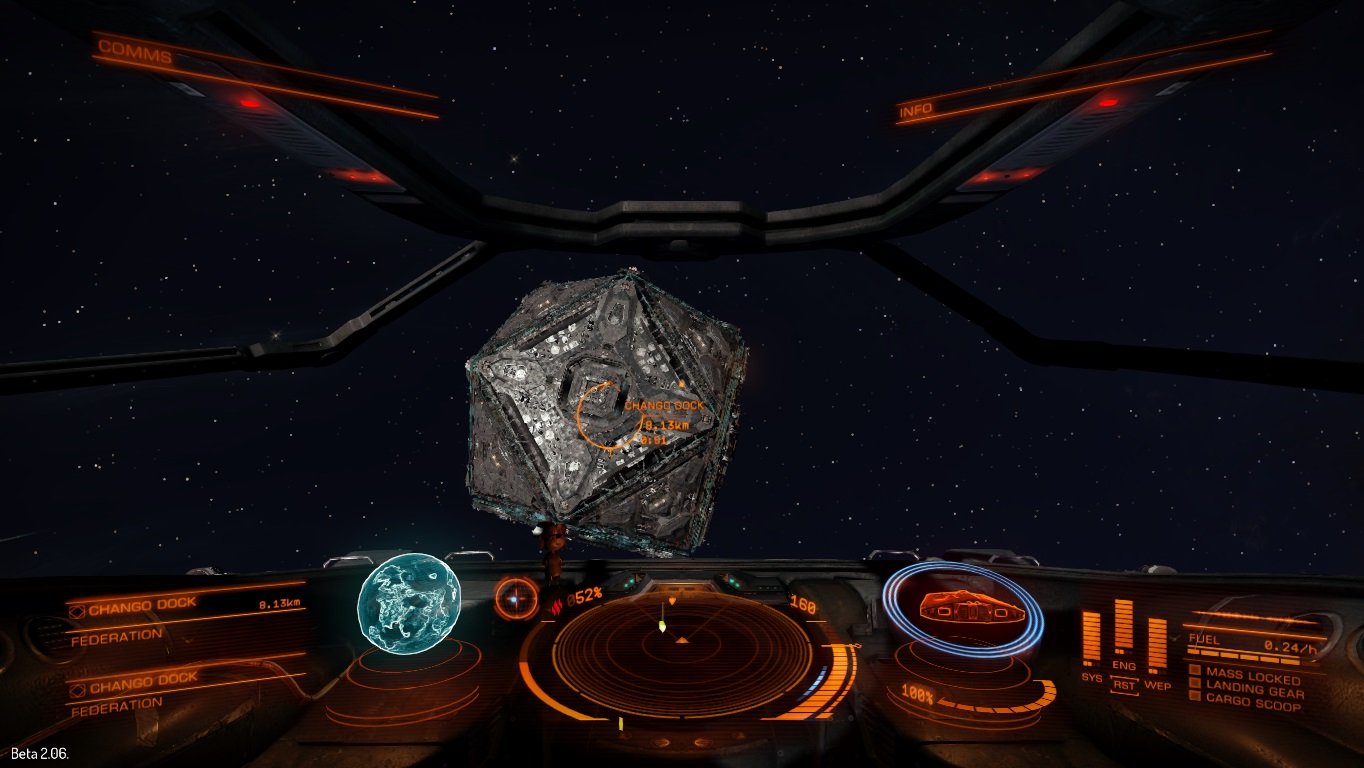 I quickly made my way to Chango Dock in the I Bootis system with minimal fuss. Landed with no fuss and delivered all the propaganda and the data, also, with no fuss. It was a very no-fuss kind of situation and it seemed like it was all going to be a routine slow grind of courier missions for credits as I got closer to my objective of getting a new ship that will actually allow me to do things. I subsequently picked up a few more missions heading to the Styx system, specifically to Wingrove Platform, an Orbis starport, and set off on a journey of getting more credits. 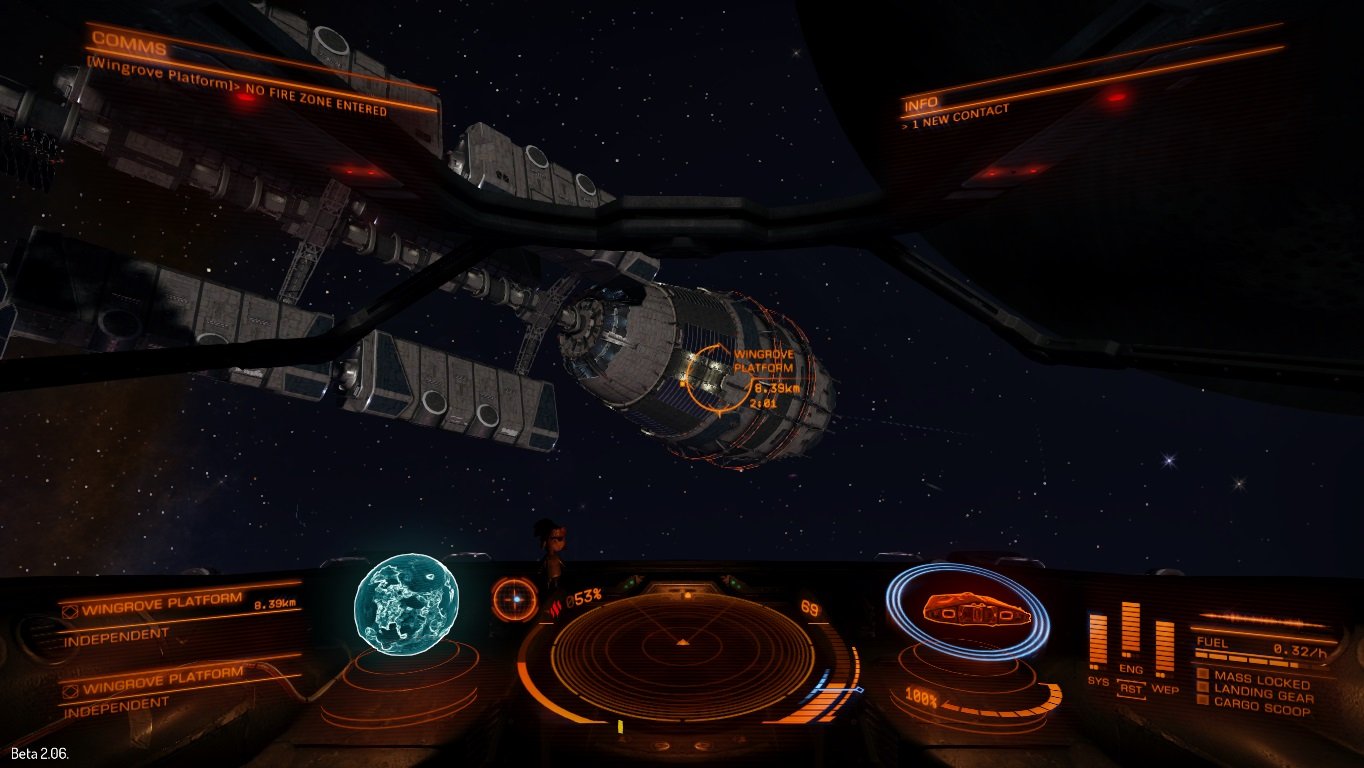 As I exited lightspeed after disengaging my frameshift drives and entered normal space around Wingrove Platform, I was greeted by the ever so welcoming message of “No Fire Zone Entered.” Well, good planetary-cycle to you too Wingrove Platform. As I got within the 7km range that was necessary to request for docking permission, I noticed that there were a lot of ships flying around near the entrance of the starport. I didn’t really think much of it and thought it was just a particularly busy day and proceeded to get closer.

I subsequently requested for docking permission. 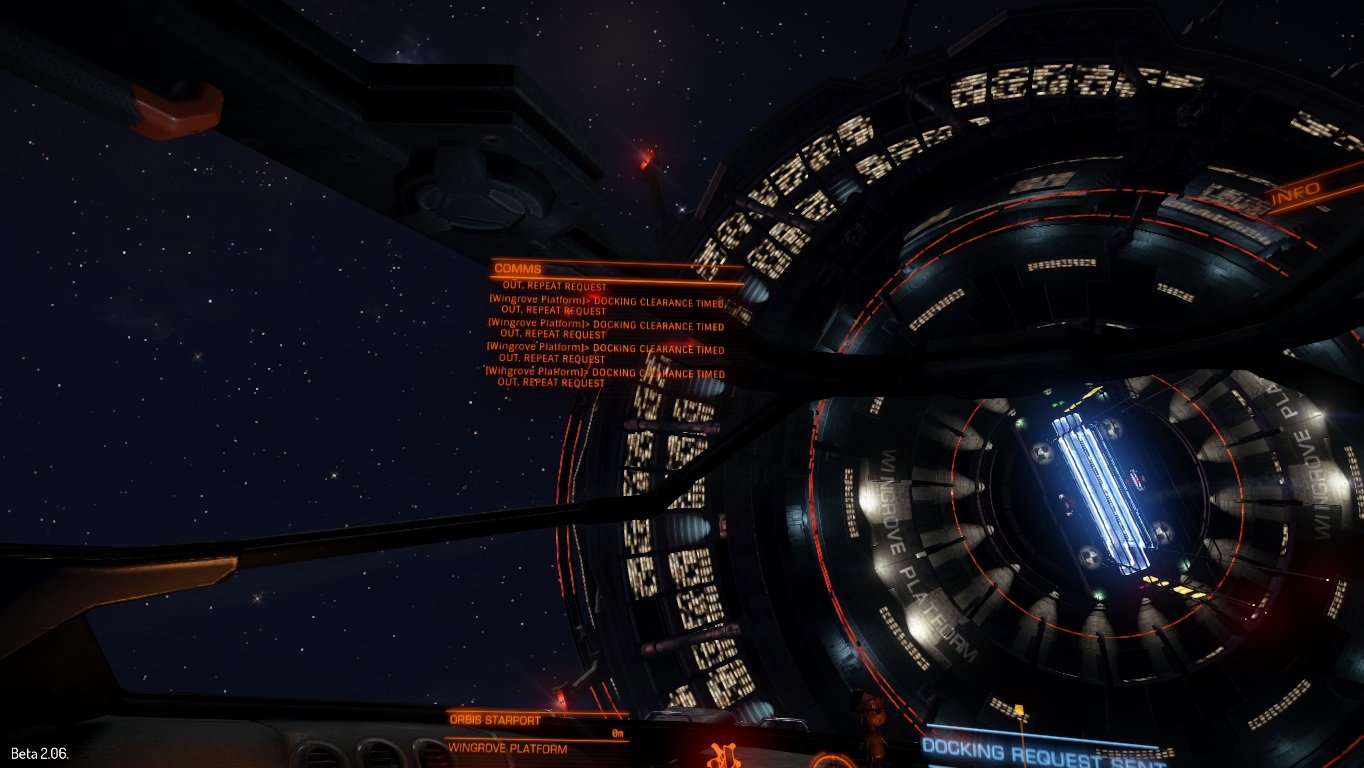 I kept repeating the request and I kept getting denied. Understandably, I was getting pretty frustrated as I gazed at the inviting entrance of Wingrove Platform. I decided to look around and see what all the other ships, that were flying around the entrance, were doing. After observing them for a minute, it was pretty clear that a lot of them were circling. Maybe they were just trying to get into Wingrove Platfrom like me!

Then I noticed it. They weren’t just circling idly. They were circling behind each other. They were firing at each other. Now I didn’t know if it was some sort of skirmish between two player groups, or between some players and the System Authority or whatever, but I wanted no part in this. All those courier jobs be damned, no propaganda fliers is worth this and after cursing my lack of situational awareness, I turned my ship around and skedaddled my way out of there as quickly as possible.

I pointed my ship in the direction of my next logical destination, or in other words, the place I was going to make the biggest amount of pay dirt that wasn’t Wingrove Platform: Aulin Enterprise in the Aulin system. 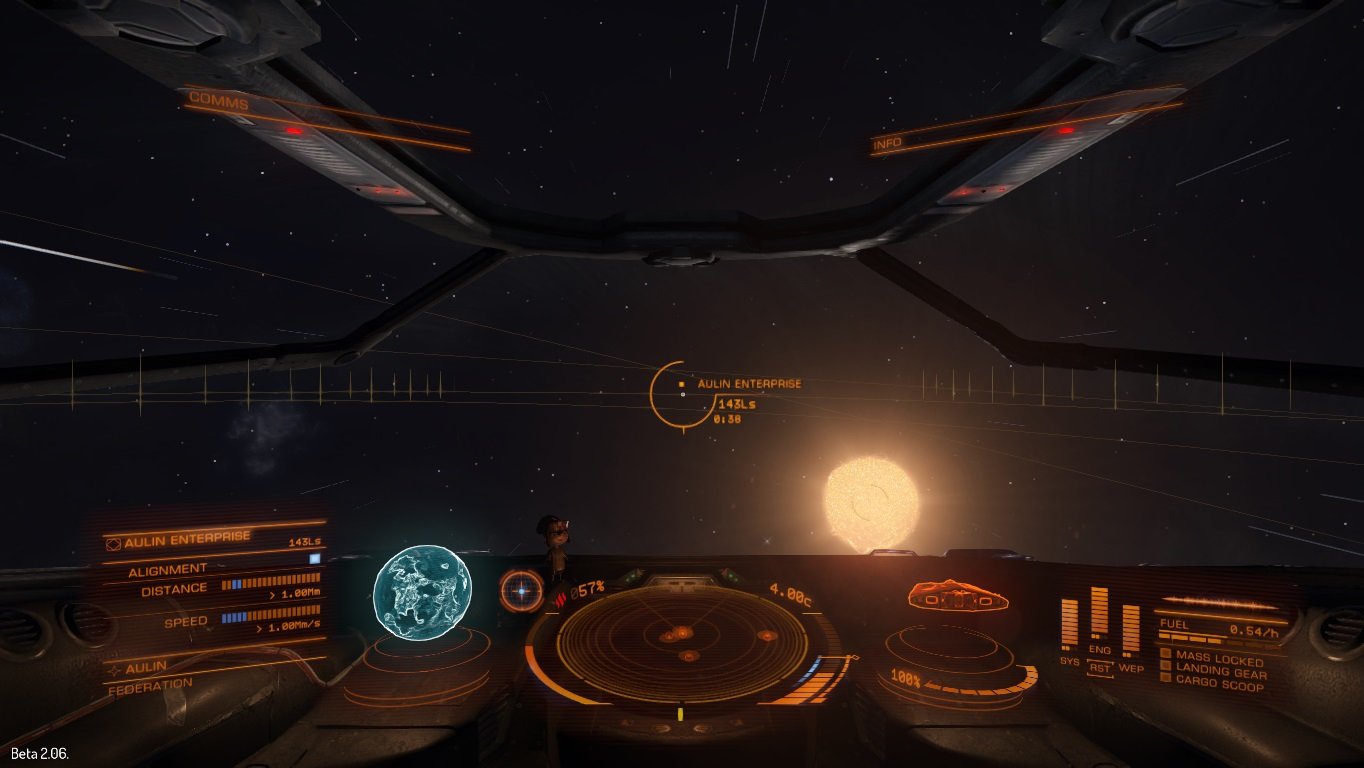 As I made my way towards the entrance of the Aulin Enterprise starport, I was hit by a familiar message after requesting for docking permission. 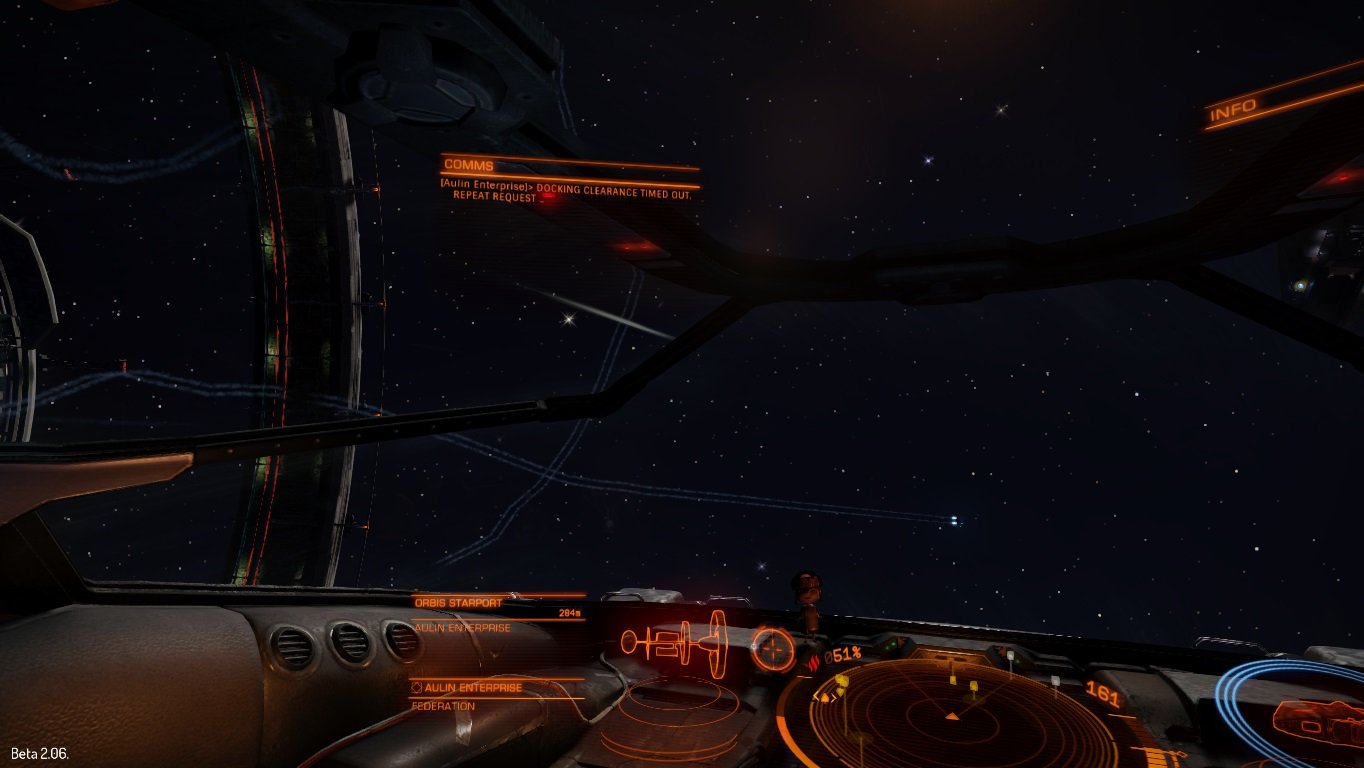 Well I’ll be damned. And it looks like I’m being denied for the same reason too. There were just a bunch of troublemakers seemingly dogfighting right outside the hangars. I don’t know if today was just some “let’s cause as much trouble” day or if everyone was getting an insatiable case of the bloodlust, but this is getting ridiculous.

Luckily, after repeatedly spamming the docking request button and hoping I didn’t get shot at and, thus, involved the the whole kerfuffle, I was granted permission and I zoomed into the station at full speed. 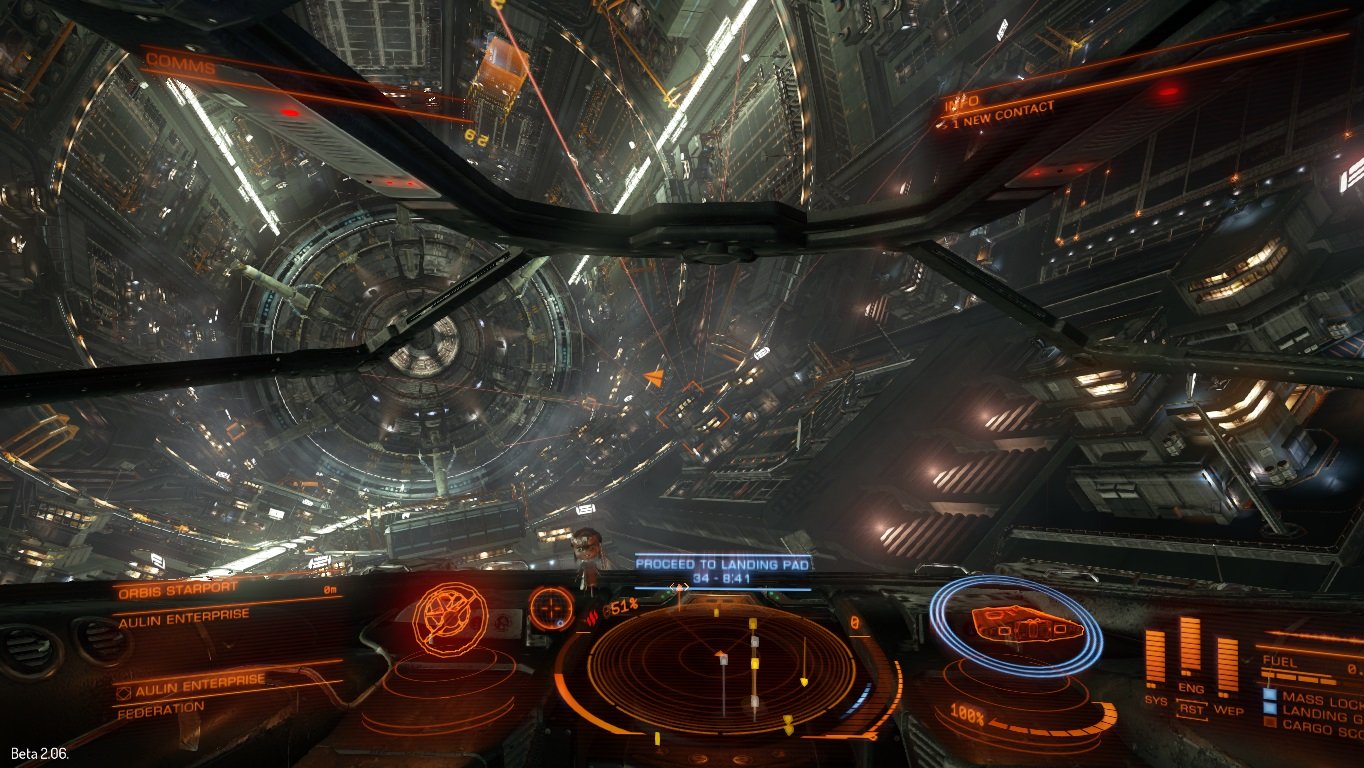 As I entered Aulin Enterprise, it seemed that the trouble wasn’t just isolated to the outside. The hangar bays were firing blaster fire all over the place (but luckily not at me) at a target that I couldn’t see and not wanting to take any inadvertent damage, I quickly rushed to my landing pad and landed. What was the world coming to? Was there a war going on? I certainly didn’t hear any word of it, but regardless of any war ‘a couriers got to cour,’ so I headed to the bulletin board to cash in on all the jobs I picked up previously and to pick up new ones.

I finally found a few jobs that required shipping actual cargo that my little sidewinder could actually carry! Finally. A variety of jobs at last! 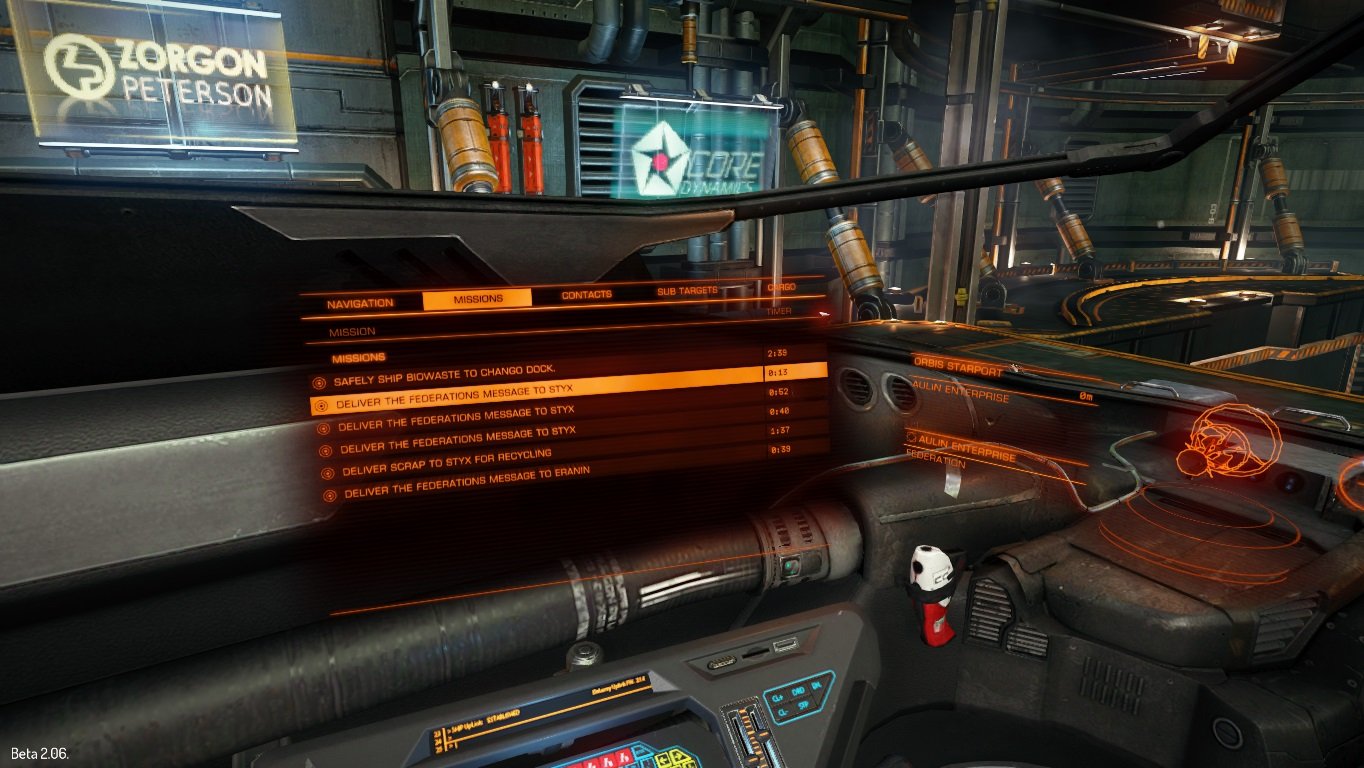 As I prepared to depart, I was met by a message that I was not accustomed to. 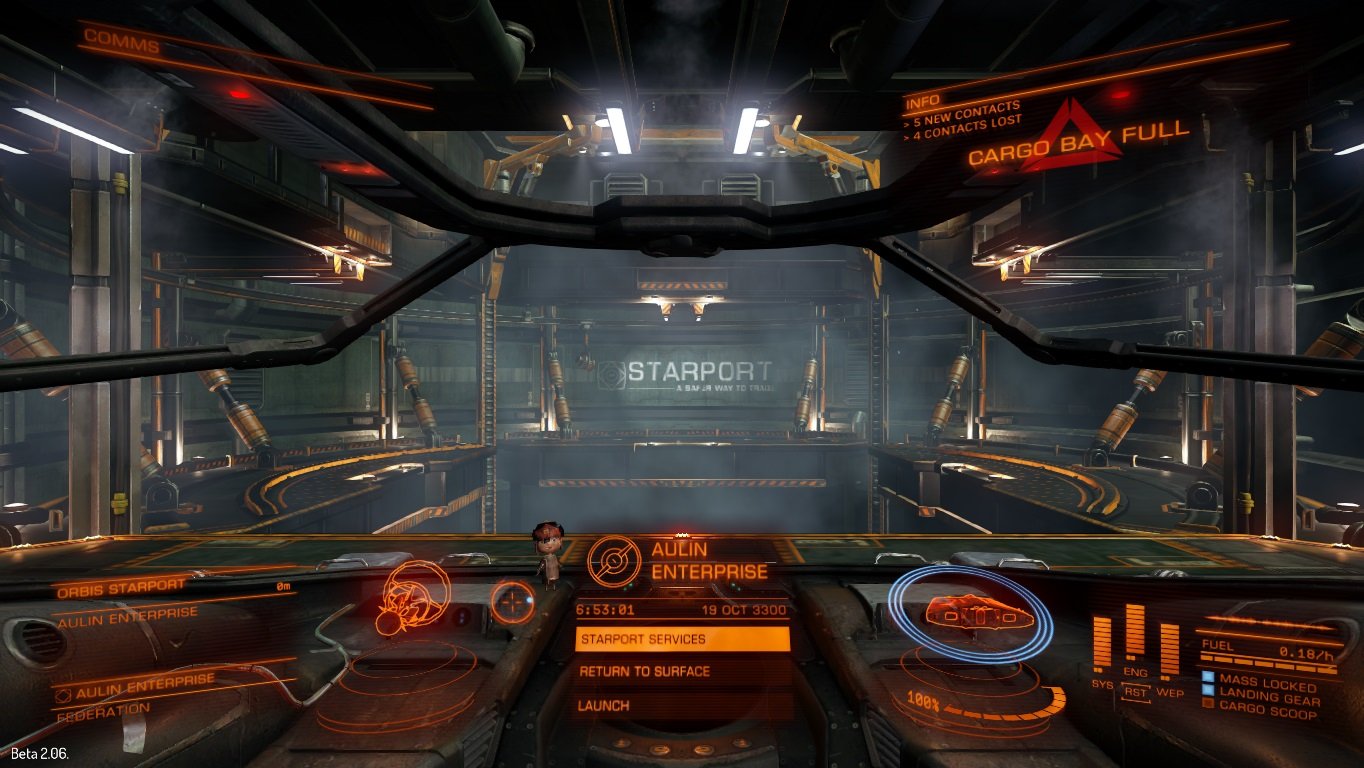 A full cargo bay! I’ve finally been able to accept a mission that actually involved me using my cargo bay. Naturally, I was extremely excited. Sure, it wasn’t the most glamorous job with all the scrap and biowaste dirtying up my ship, but it was a job nonetheless! And all of the jobs were going to the same place, pretty much. It was either Chango Dock in I Bootis or the much more lucrative Bixby Station in the Styx system! I was confident I could get to all of them in time so I took up all the jobs and set course for Styx first, just in case I couldn’t make it in time to cash in if I had decided to go to I Bootis first.

Unfortunately, it seems I made a slight miscalculation. 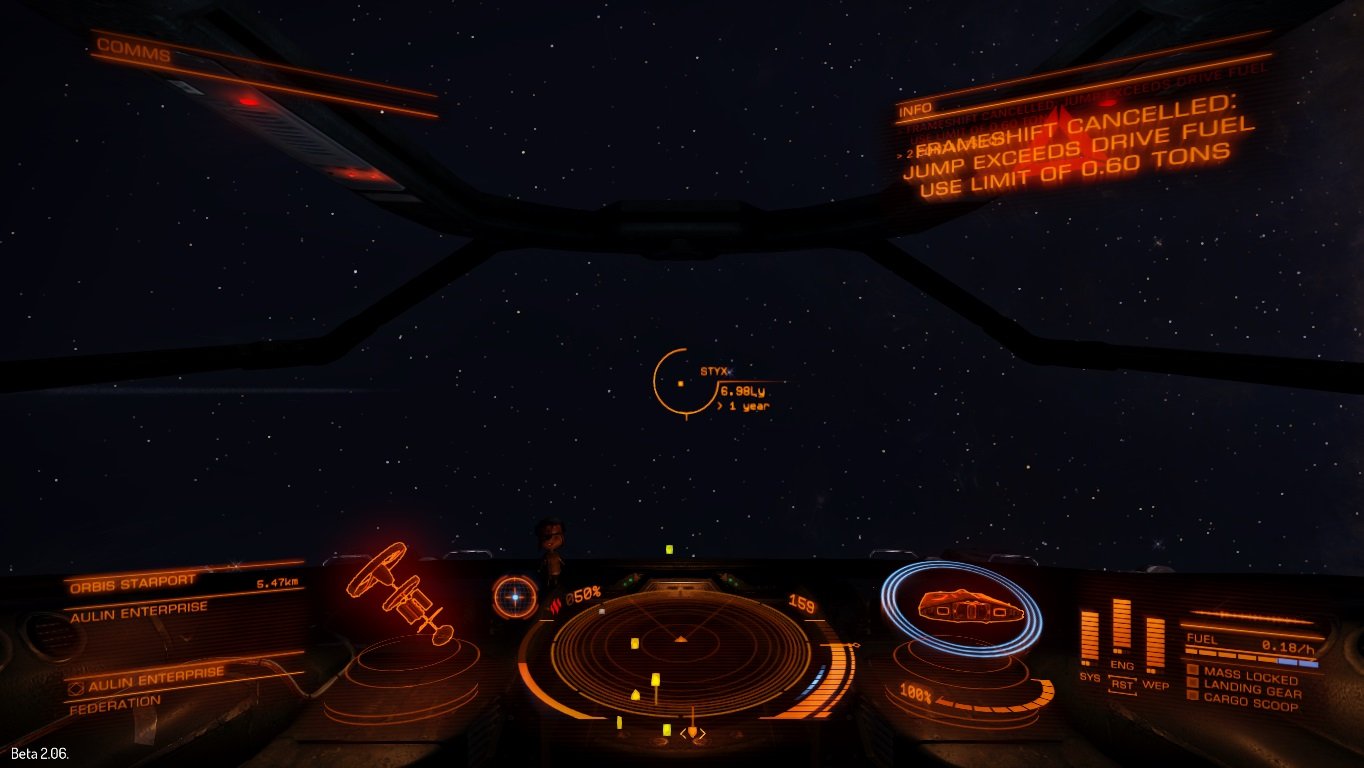 Well, that’s just swings and roundabouts. Well, I guess it’s back to Chango Dock I go. To the I Bootis system!

It was all pretty uneventful as I entered Chango Dock. I landed on my designated landing pad and unloaded all the biowaste. Not sure what they wanted to do with two tons of excrement, but I’m sure they have a plan. As I began to exit the station, I noticed the charred remains of a fellow spacer floating around in the station. My first thoughts was that someone should probably clean this up, what if it scratched my paint? My second thought was “oh dear, did the troublemakers make it to Chango Dock too?” Nowhere is safe! Or perhaps he was a smuggler and had gotten caught by the System Authority. It’s hard to tell, but I wasn’t particularly eager to stick around and find out.

Having emptied half of my cargo hold and having made a jump that halved my distance to the Styx system, I was positive I could now make the jump to Styx without angering the frameshift gods. The jump went off without a hitch and I made my way to Bixby station in normal fashion, overshooting it as usual and having to turn around. After landing, I headed to the bulletin board in glee. 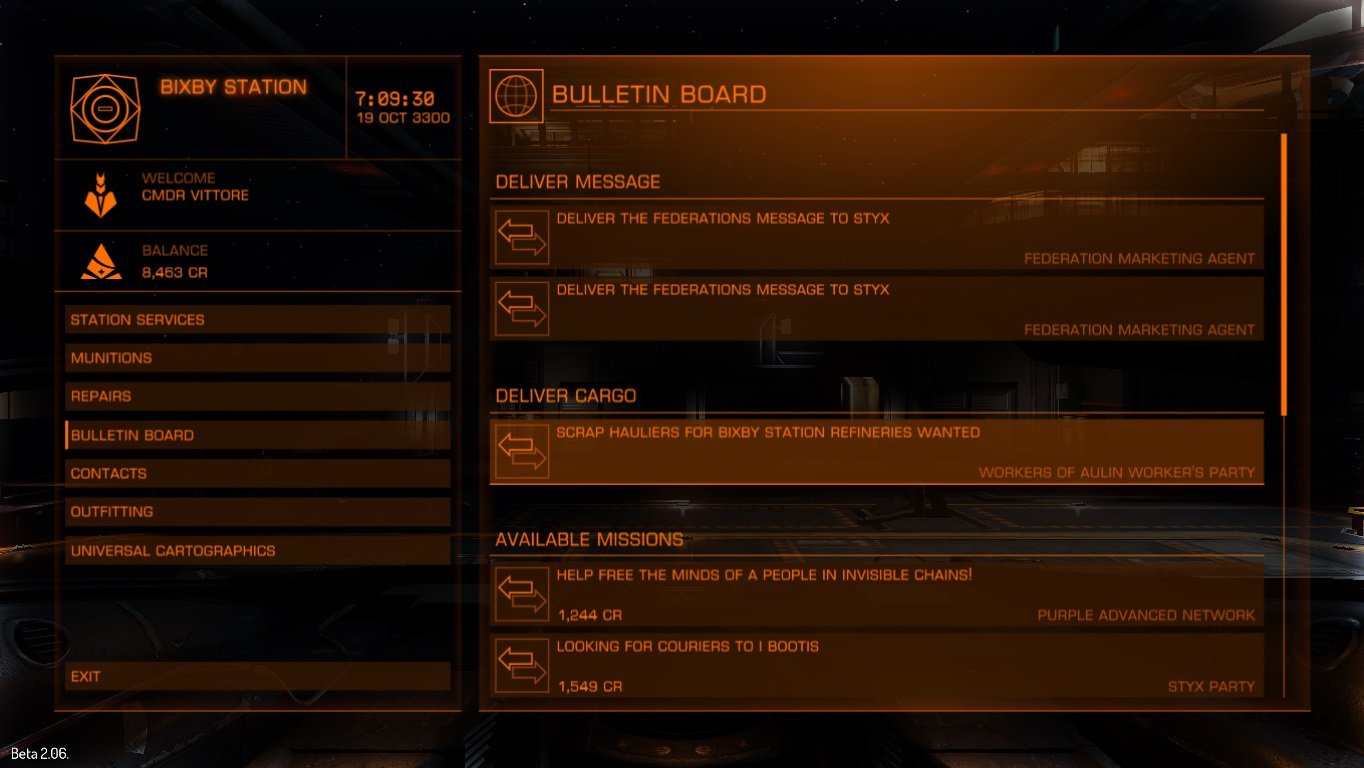 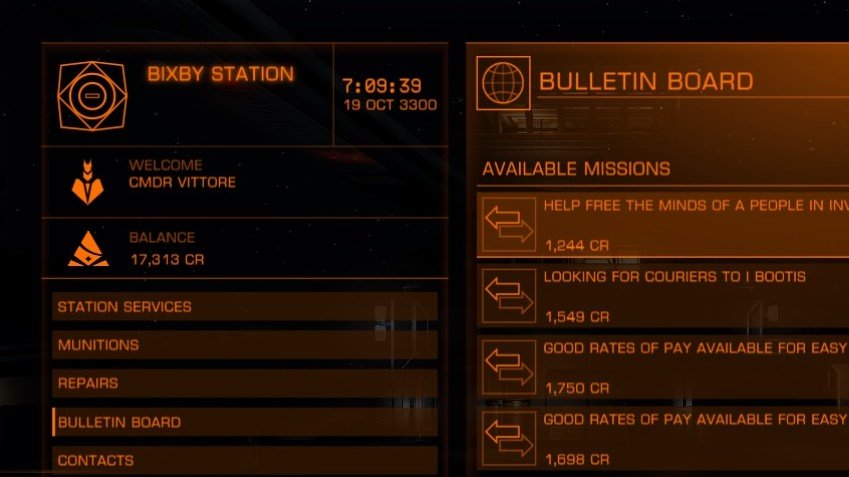 Commander Vittore has now hit 5 digits of credits after, effectively, doubling my number of credits! A few more runs like this and I’ll get a new ship in no time! First milestone complete! I felt mighty high of myself as I picked up a few more jobs that helped to oil the political machines in Elite Dangerous with propaganda and “education” deliveries to a such-and-such system.

Times are good and the money is even better. I engaged my jump drive to head back to I Bootis to drop off the next batch of freshly printed propaganda posters and fliers. 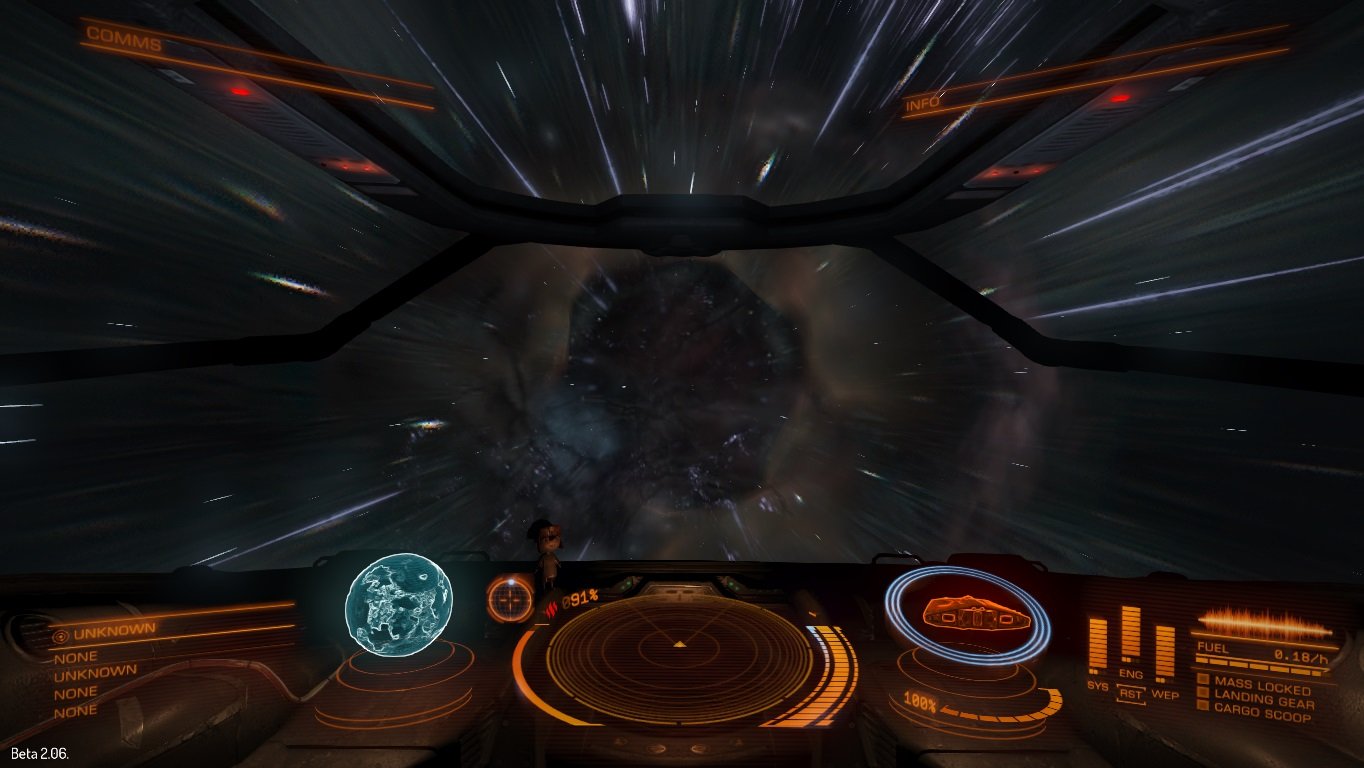 I kicked my feet up as I waited for the jump drive to get me to I Bootis in the customary short amount of time. It seemed to be taking a little longer than normal, but no matter, I’m sure I’ll get to I Bootis soon. 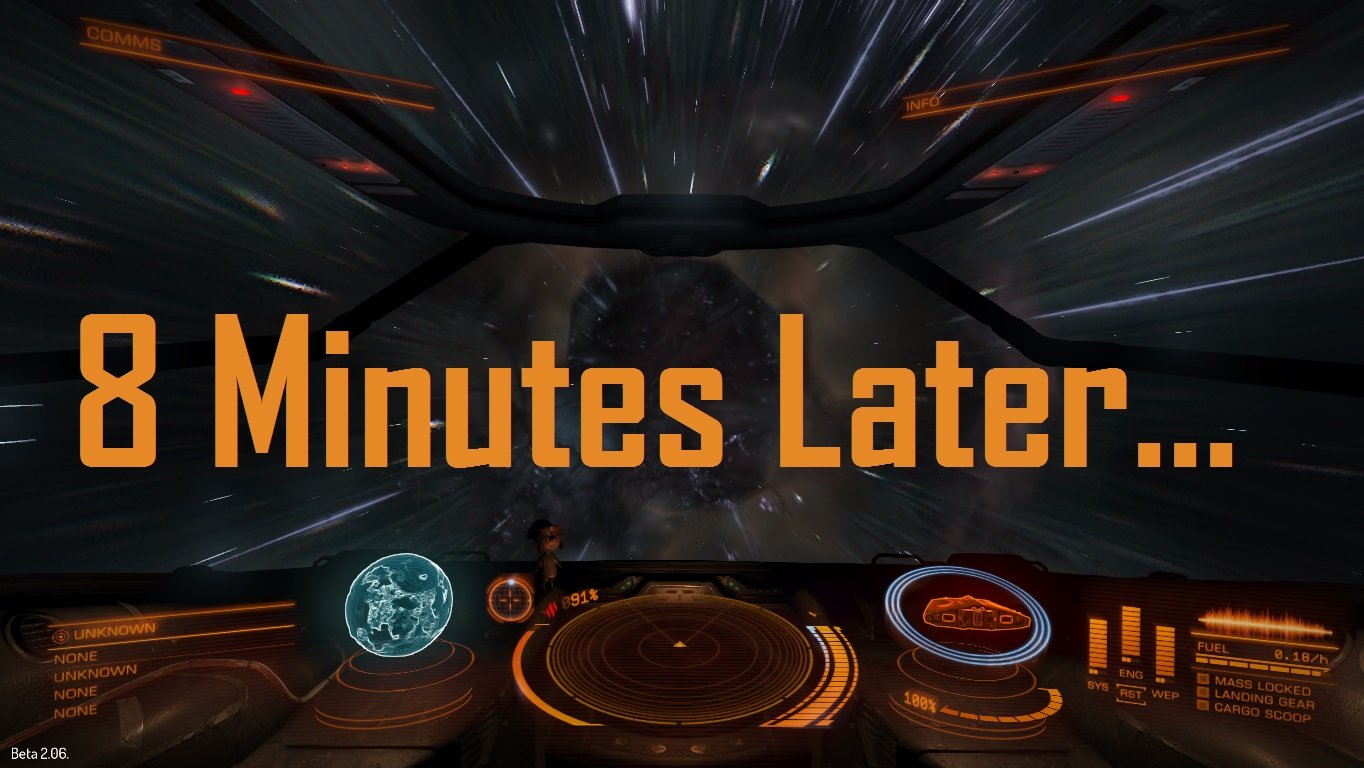 Uh oh. It appears something is amiss. I’m trapped in perpetual jump.

What are your thoughts on Danny’s adventures in Elite Dangerous so far? What do you think he should be doing? Is he a right muppet? Let us know in the comments below!