The latest news in the world of video games at Attack of the Fanboy
October 14th, 2014 by Danny Vittore 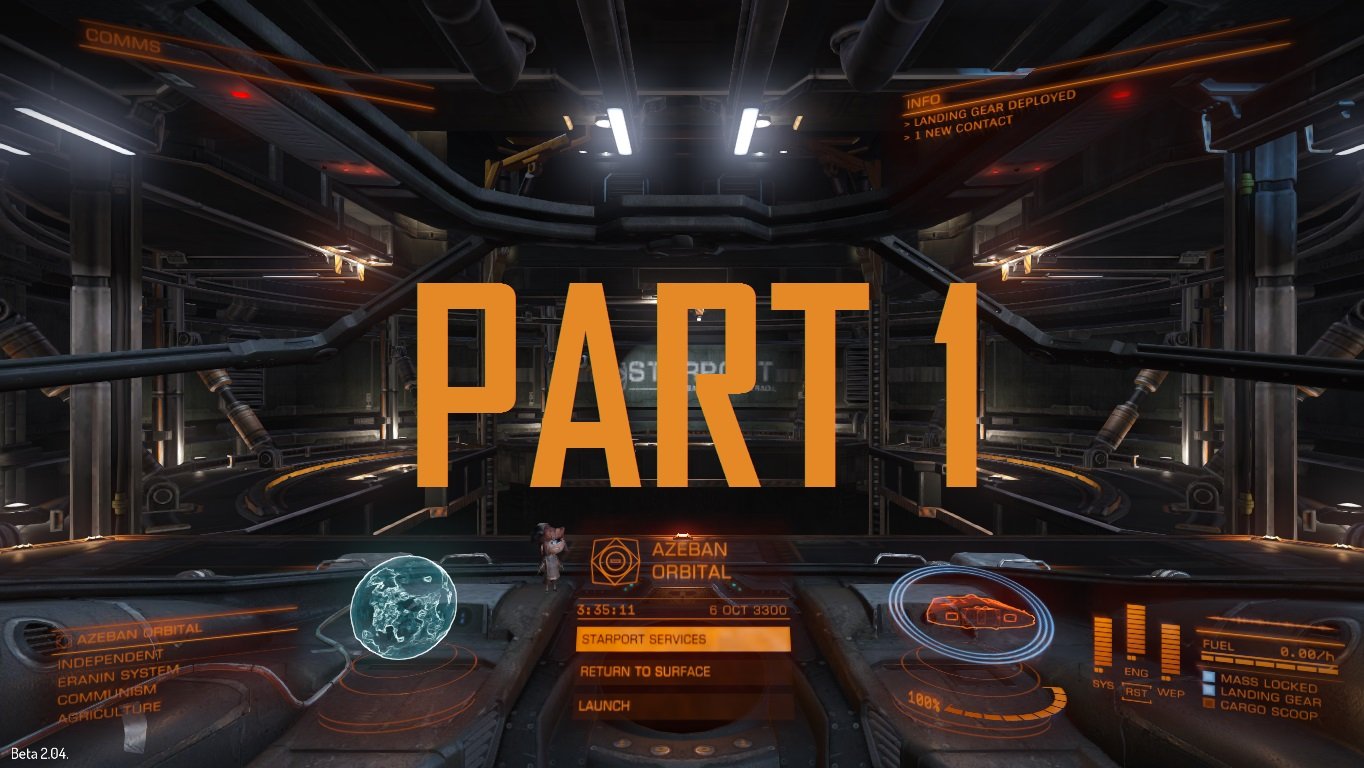 Elite Dangerous is a space combat, exploration, life simulation game being made by Frontier Developments, the studio run by David Braben (one of the creators of the original Elite series). It is currently in the last phases of the closed Beta which you can join by buying the special beta pack.

To give you a better idea of what to expect in Elite Dangerous, Danny will take up the role of Commander Vittore and tell us of his adventures and shenanigans in the Elite Dangerous beta.

When you think about your dreams of being a spacer (assuming that you have such dreams), you probably have thoughts of being an intergalactic crime fighter or an ace mercenary/space fighter pilot or some great explorer. Well, life isn’t always like that. Just like how we can’t all be Batman, Rambo or Christopher Columbus, not everyone can be the very best. It’s sort of in the definition of the word. However, you can always aspire to something and that’s where we shall begin!

…In Azeban Orbital, of the Eranin System. Home to a bunch of communist farmers. Not saying that I’m a space-age McCarthyist or anything, but I’m pretty sure I’m not going to become a great spacer, an elite spacer if you will, sticking around here. Having finally received my pilots license by completing the basic tutorials, I have discerned two things about myself as a spaceship pilot:

Thus, that puts the mercenary/military business safely out of the question and as bounty hunting is still going to require some fighting, that is getting ruled out too. So it seems it shall be the pacifist ways for me. I’ve heard that exploration can be quite a prosperous endeavor, something to do with resource rights and all that fun, bureaucratic nonsense, but first things first, it’s probably going to be a good idea to inspect the ship that will be home for the next few weeks, at the very least. 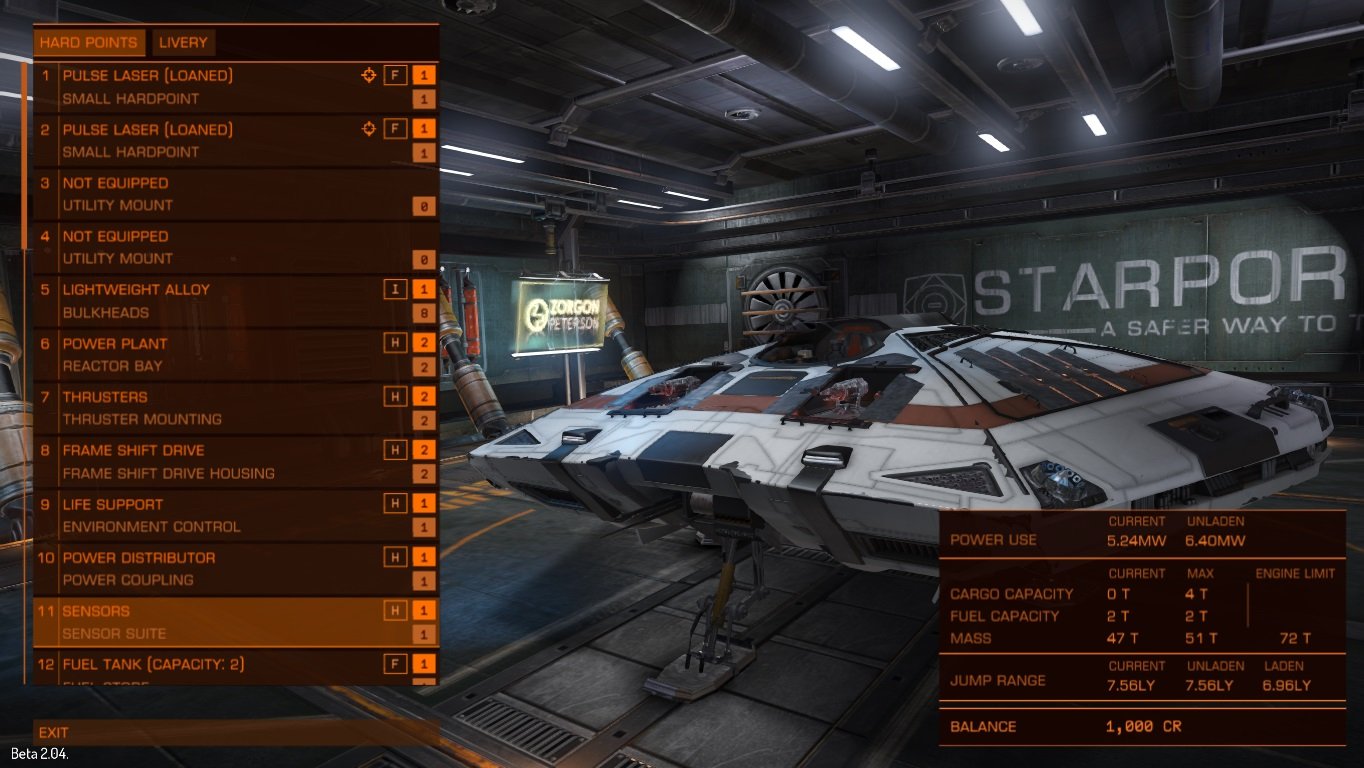 This is the Sidewinder, the starter ship for all Elite Dangerous-ers. As you can clearly see, it is one part cute flying oblong and two parts wholly inadequate in being the spaceship of choice for a budding space explorer, with a fuel capacity of 2. I’m going to need a bigger ship.

I promptly head over to the shipyards to take a gander at the prices of a new, bigger ship with no understanding of how much my starting 1000 credits is worth. Am I a rich man or am I a poor man?

I quickly determine that I am indeed a poor man and left the shipyards promptly. I’m going to need more money. A lot more. So what are the fastest ways to make money? Elite Dangerous isn’t just a space combat and exploration game. It simulates a very complicated and sophisticated space economy as well, where traders can do a hefty amount of business! Unfortunately, the Sidewinder only has a cargo hold capable of carrying 4 tons of cargo and with only 1000 credits to buy cargo with I am severely limited in this regard.

I therefore take to the bulletin boards to look for meaningful work. I see something that looks promising. 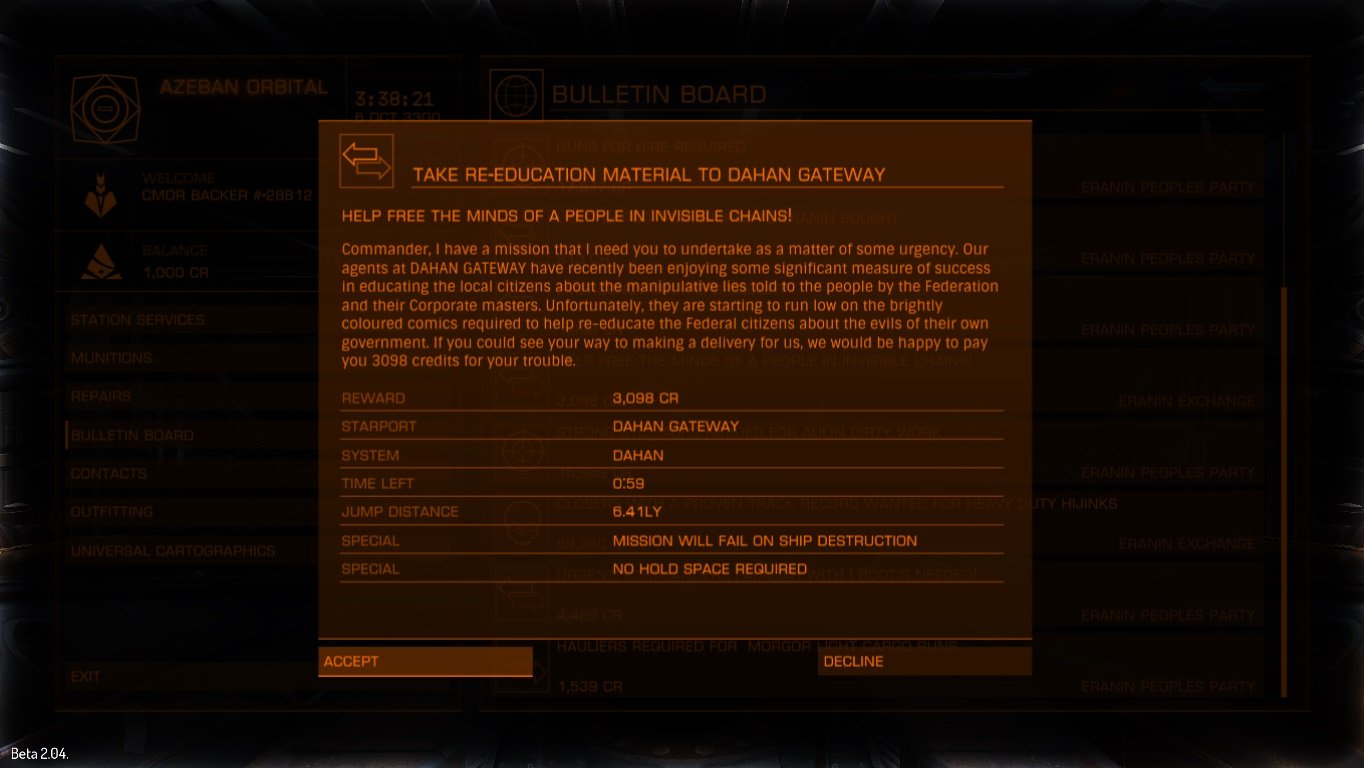 3098 credits just to deliver a bunch of communist propaganda comics to Dahan Gateway with no hold space requirements? Sounds like the easiest job possible. I’m in.

I accept the job and promptly take off from Azeban Orbital. There are many different kinds of space stations in Elite Dangerous and Azeban Orbital just happens to be one of the smaller types. I bid farewell to my starter station and promptly head out of the station’s and planet’s gravitational ranges to perform a jump to the Dahan system.

I aim my Sidewinder in the direction of Dahan Gateway, my destination, and a few twiddle of my thumbs and some super-cruising at multiple speeds of light later, I can see the blip that is Dahan Gateway,  I subsequently blast right past the station at ridiculous speeds because I haven’t quite gotten a handle on controlling super-cruising yet. Whoops. 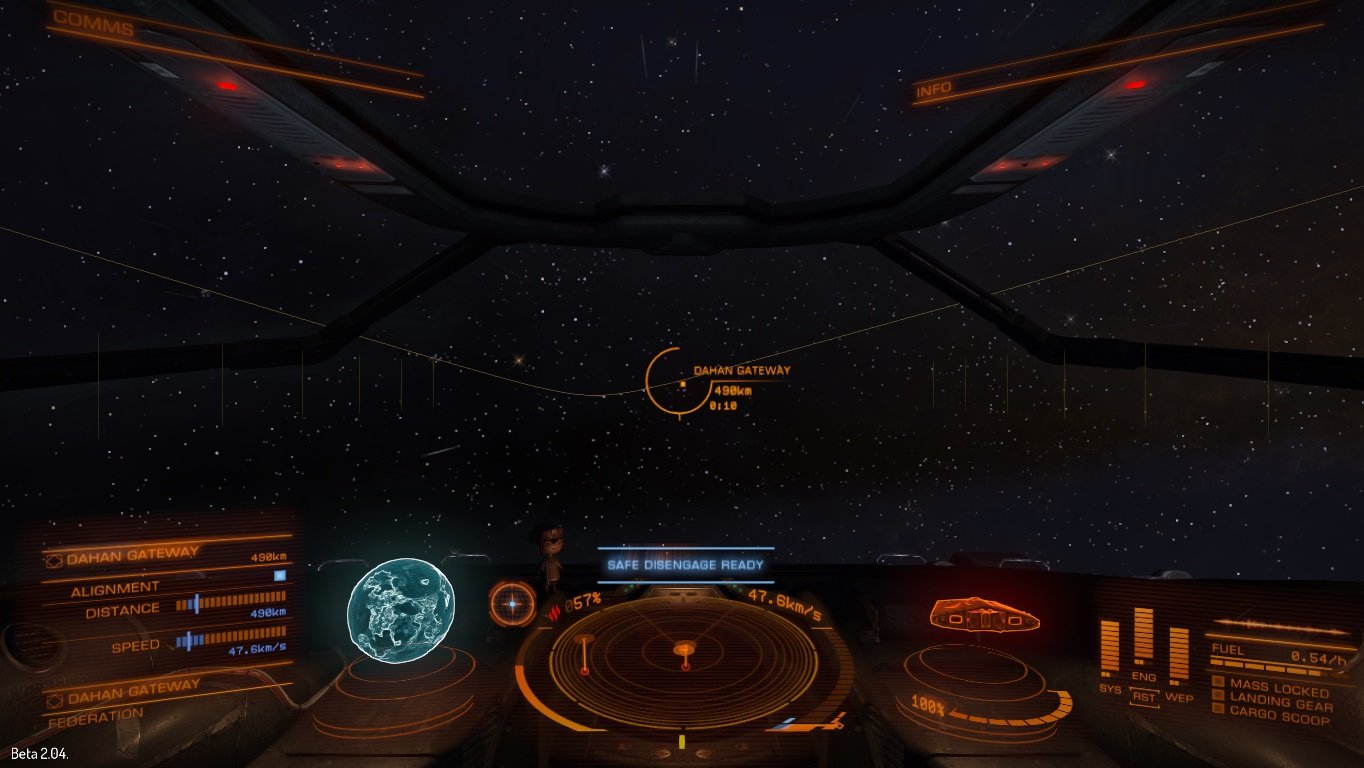 Nonetheless, I turn my ship around and safely disengage my super-cruise when I’m about 450km away from Dahan Gateway. When I get within 3km of the station I request docking permission (which just adds that extra level of immersion in Elite Dangerous) and get assigned to landing pad 28.

As I get closer, I see that the station in question is in fact nothing like little Azeban Orbital, but a massive Coriolis station which is constantly rotating making entering the hilariously small port door that much harder. Doesn’t stop me trying and succeeding though. I had enough crashes and bumps in the tutorial to fix that! 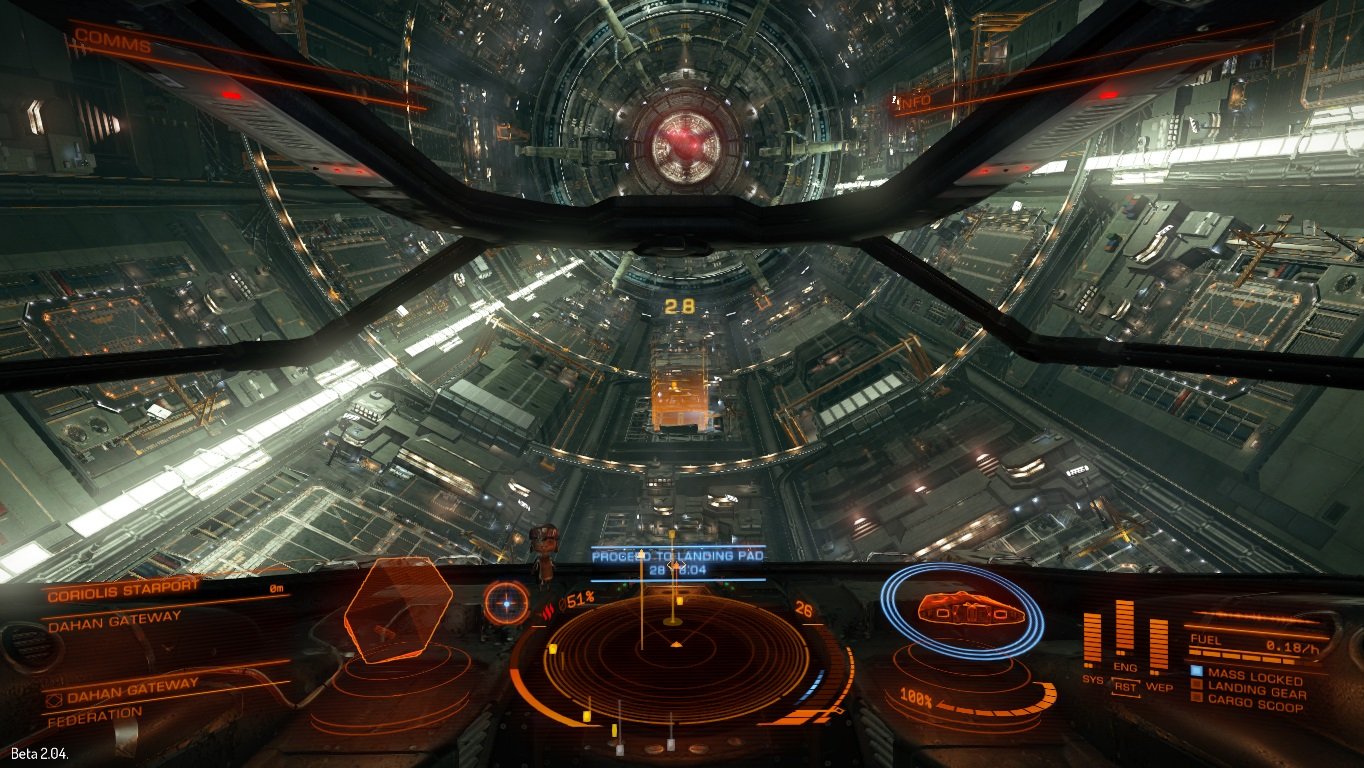 I land without much fuss and head straight to the bulletin board to turn in my first courier job for my first paycheck. 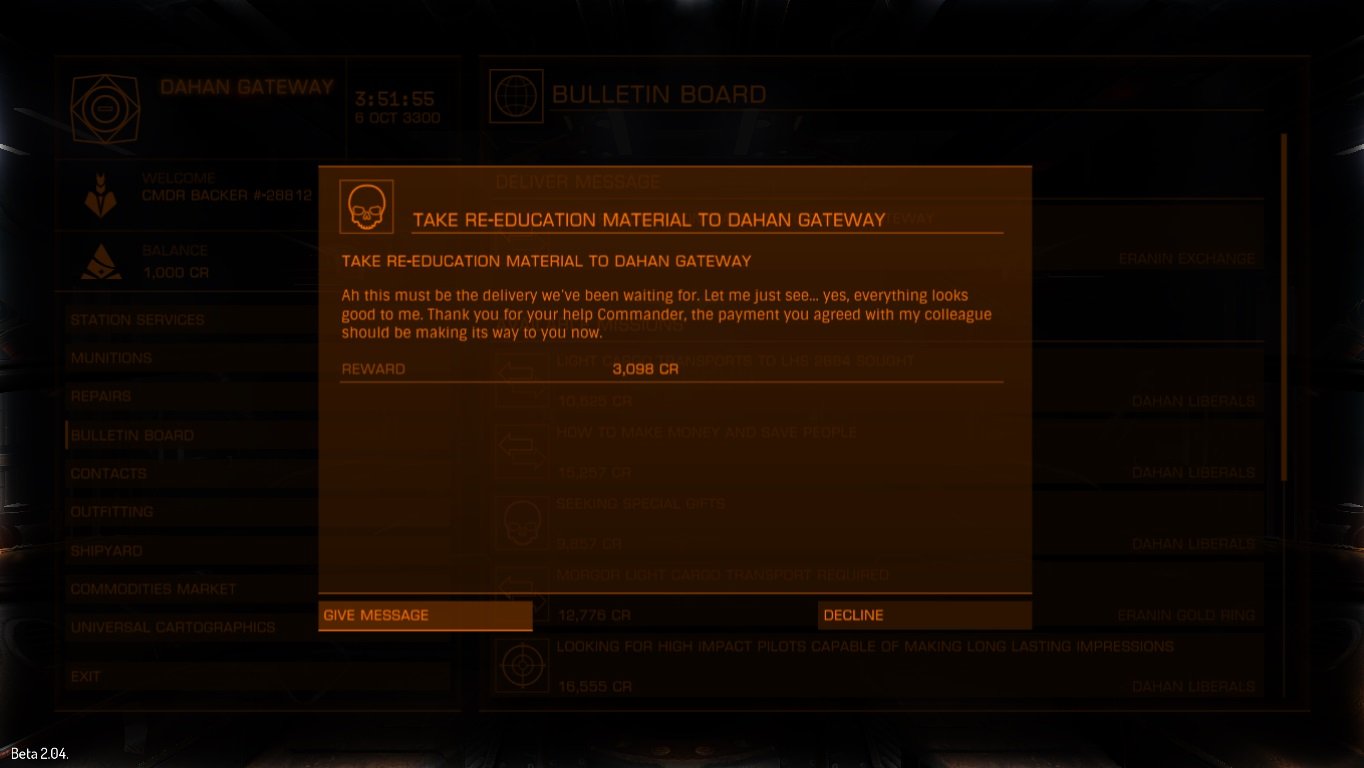 4098 credits. While I am still relatively poor, I’m no longer destitute, but I’m going to need to do more jobs, so I head to the bulletin board to see what there is for beginner spacer like me. 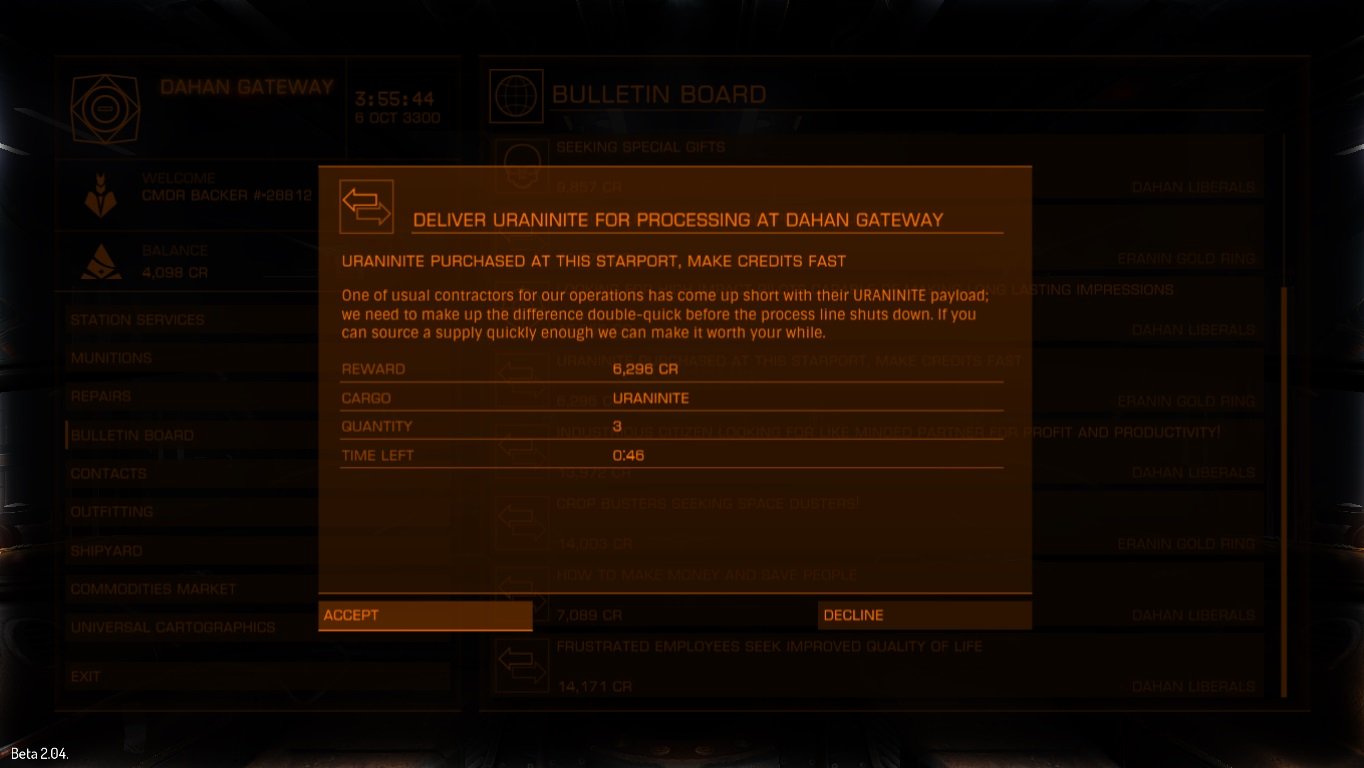 I have no idea what Uraninite is, but 6296 credits will get me to 10k credits with spare change. How hard can it be? So I just need to find 3 units of this stuff and bring it back. Sounds simple enough. At this point, I start wracking my brain, wondering where I would find uraninite. There is, quite predictably, no uraninite on the local market of Dahan Gateway (you ever know, maybe they just weren’t too bright at whatever company is offering the contract) and it becomes quite clear that I’m going to have to go quite far to retrieve this uraninite.

I open up my navigation map to look up places where I think I have a high chance of finding uraninite. Dahan 3 Metalworks catches my eye. In hindsight, I realize it probably makes no sense. Uraninite ends in -ite, which implies a mineral or ore. A metalwork deals with, at least I assume it hasn’t changed in the year 3300, building things out of metal. Even if they did have spare minerals or ore, they probably weren’t in the selling mood. My mind was clearly on a different tangent altogether though, so I promptly set course for Dahan 3 Metalworks to retrieve some uraninite. 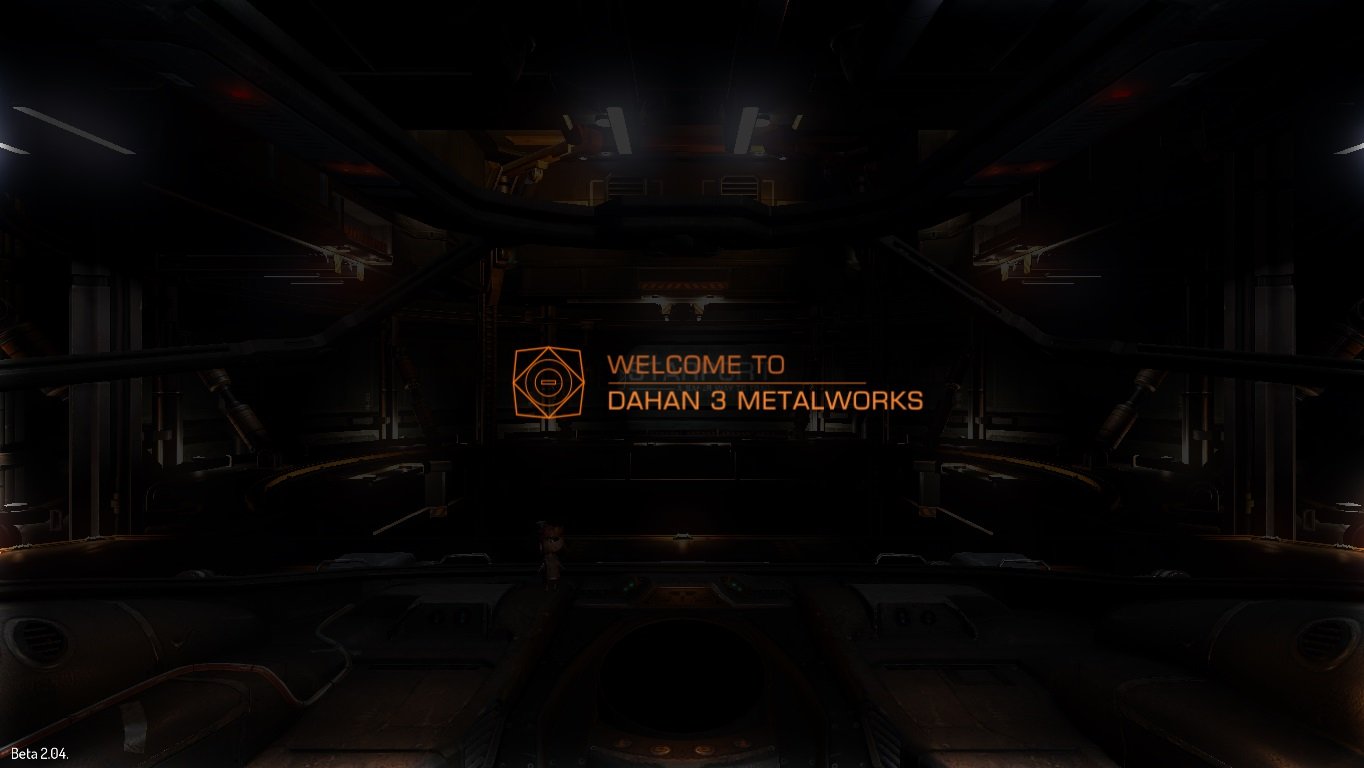 I arrive at Dahan 3 Metalworks and, suprise surprise, there is no uraninite to be seen anywhere. What actually is surprising however is that there is no market or seller here at all. Just the ability to repair and refuel my ship. Dejected I take off and another place on my navigation map catches my eye: Resource extraction site.

Uraninite is a resource! I must be able to get some there. Course set to generic resource extraction site! 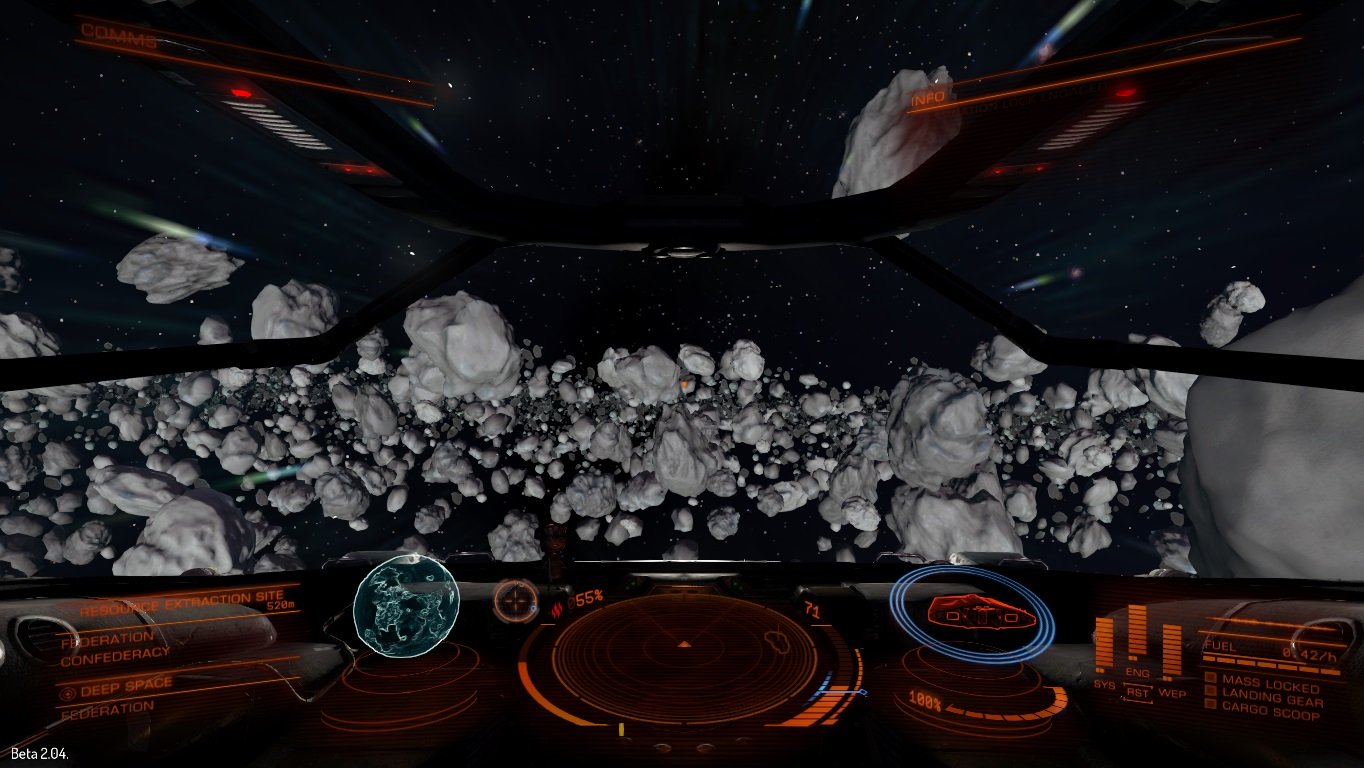 Asteroids. Asteroids everywhere. I should have guessed. Not only do I have no clue if any of these asteroids even contain uraninite, I have no idea how I would ascertain such information or extract the uraninite from the asteroids.

I fire at the asteroids with my loaned pulse lasers in vain. They are very, very big asteroids and my lasers are very, very little. My decision to leave this place is hastened by the arrival by a few dangerous looking types and I choose to jump back to Dahan Gateway to refuel and rethink. 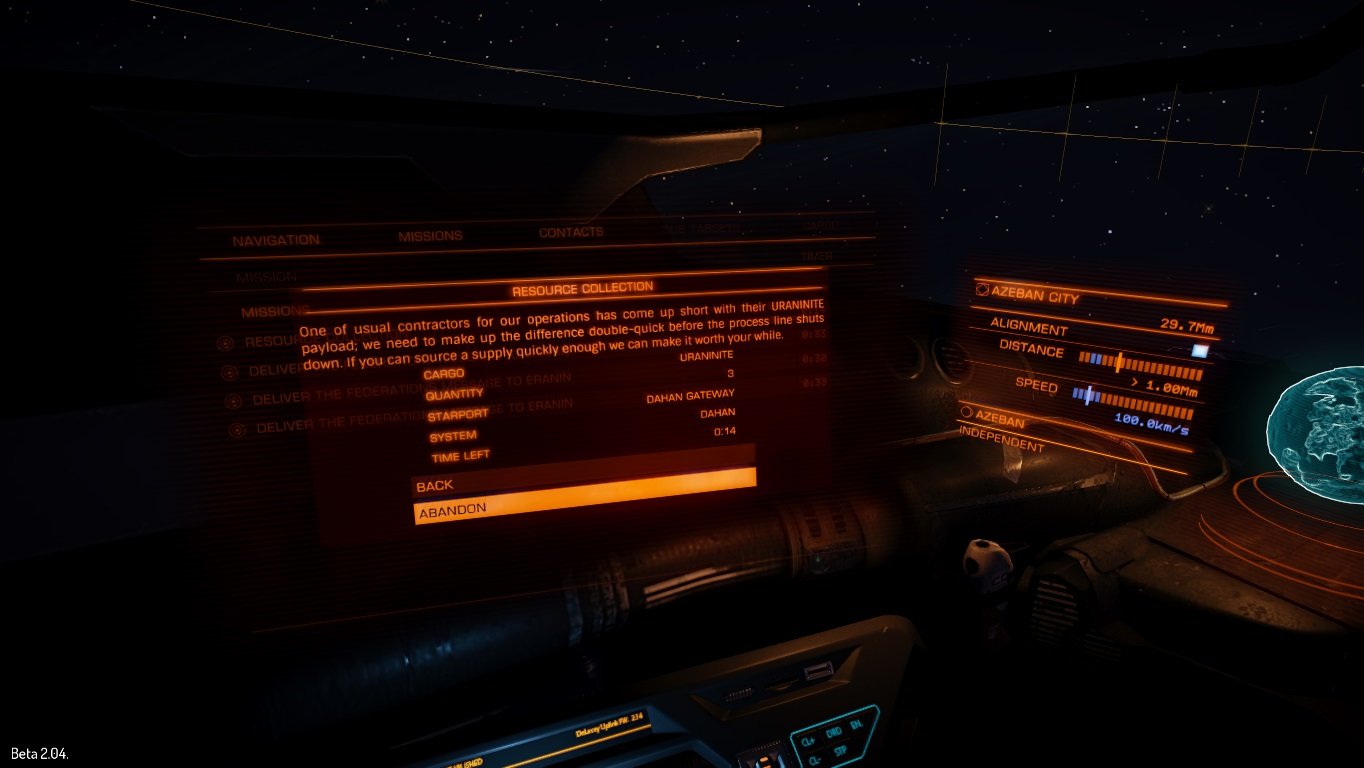 Having refueled, I consulted my mission log and noticed that I had 14 minutes left. At this point, my confidence of getting any uraninite was very low. I decided to outright abandon the mission. I don’t know if there are repercussions or negative effects in doing so, but I will be leaving the nameless, faceless company that is in dire need of uraninite to fend for themselves. They were probably up to no good anyway. Uraninite sounds too much like uranium.

I have a lot to learn about Elite Dangerous before I can think about trying to climb the rungs of spacer society. But I’m going to get there. I’m going to go back to Azeban Orbital to rethink my next course of action…

What are your thoughts on Danny’s adventures in Elite Dangerous so far? What do you think he should be doing? Is he a right muppet? Let us know in the comments below!