The latest news in the world of video games at Attack of the Fanboy
February 10th, 2018 by William Schwartz 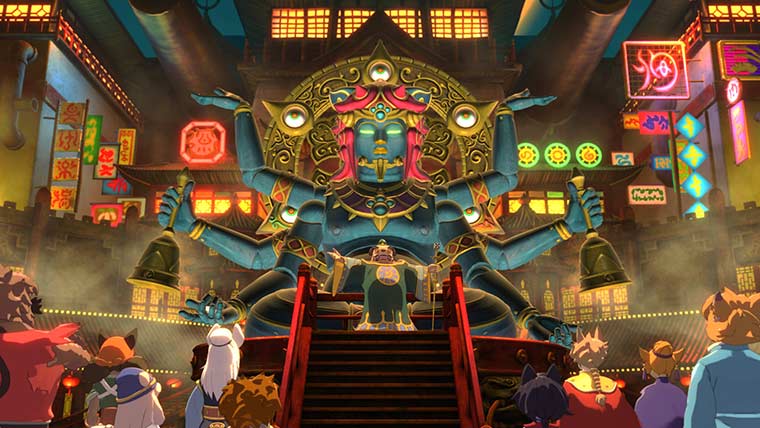 With Ni No Kuni II due out shortly for the PlayStation 4, we’re getting more details about the upcoming RPG.  PlayStation and Bandai Namco have sat down for a lengthy gameplay session that explains some of the battle system features for the game, taking players to the gorgeous location of Golden Paw and the Calmlands.

The major differences that players of the original game will see is that the battles are no longer a hybrid turn-based style.  In Ni No Kuni 2: Revenant Kingdom the game features more real time elements in the combat.  However, you can still pause the game if you are in mid-battle and need to use items.  Combat will be split between dungeons and overworld with some minor differences in each.  Once you start combat in the dungeons of Ni No Kuni 2 you will be locked into a fight with a wall limiter.  You’ll only be able to go so far away from an enemy in a dungeon but the enemies that can enter the fight are limited.

Combat in Ni No Kuni 2 will also feature Higgledies, which can be caught and brought into battle with you.  They represent different types of elements like Fire, Light, Darkness, and Water.  They give you different attacks and benefits in combat with two passive benefits and an active power which can be used when in the circle of influence.  To some extent they replace familiars from the first game.  New Higgledies will be found at different shrines located throughout the game.   Each Higgledie can be accessed through the party menu, and each have a different cost associated with them that the player must manage. The real time battle system allows players to switch between different active characters on the fly.  If a character is not active they cannot be brought into battle once a battle begins, but can be swapped in ahead of time.

The monsters of Ni No Kuni 2 all have different types.  In the game’s Tactics Tweaker menu players can access a set of sliders that allow them tweak the different spoils of victory and the ability to be stronger against certain monsters.  Giving yourself a benefit against certain Monster types will also give you a weakness to the counter-type.  This can be useful for players as they adventure into different areas of the game.  These sliders are adjusted by using Battle Points and cannot be freely changed unless the players have the number of points.

Ni No Kuni 2: Revenant Kingdom looks to be a significant upgrade from the first game.  With visual upgrades that the PS4 provides, as well as upgrades to the numerous battle systems of the game, fans of the first one are sure to be pleased.  The game will also feature 60FPS gameplay on both the PlayStation 4 and PlayStation 4 Pro, with the latter having a 4K mode as well.

Ni No Kuni 2 is releasing on March 23rd.