A Way Out Review

The latest news in the world of video games at Attack of the Fanboy
March 22nd, 2018 by William Schwartz After competing A Way Out, it’s easy to see why outspoken Director Josef Fares is so excited about his latest game.  It’s really good.  Is it conventional?  Not really, as A Way Out offers players only one way to play, and that’s cooperatively with a friend.  While co-op is something that many games include as a feature, this narrow focus allows the small Swedish studio, Hazelight, to handcraft a game that’s built around it and it shows.

Players must choose between one of two characters.  Both men, Vincent and Leo, have just arrived in prison and it’s quickly discovered that the pair have a common enemy.  Vincent is a banker who’s seemingly been set-up by a mysterious criminal figure named Harvey for the death of his brother.  Leo, on the other hand, was involved in a heist where he was betrayed by the same man.  The pair become neighbors at the prison, where they formulate a plan to bust out of jail and seek revenge.  While it’s a slow burn, A Way Out is a wild ride of a story with many film influences found within. 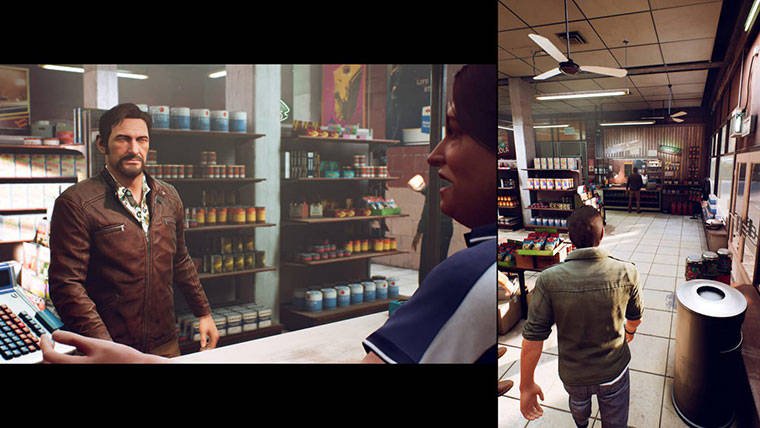 The gameplay of A Way Out is unique.  Players can only play this game with another person, and it’s played in split-screen whether playing locally or online.  It’s an interesting tactic, but one that allows for both players to experience the story of each character.  This cooperative gameplay features a lot of the things that you’ve come to expect from this type of game.  Players work together to solve puzzles, mainly through quick time events and simple button prompts.  The story puts players in a diverse series of settings. This ranges from life in prison, to a daring escape, and then life on the run.  These settings range from tense stealth sequences where the players must work in concert to avoid detection, to all-out action sequences that involve large scale shootouts and driving.

Players can select different approaches when tackling various scenarios.  As each character has a unique personality, the team of players must choose a path to take.  Whether that be Leo’s more brazen approach or Vincent’s more level-headed tactics.  While the game does appear to be fairly linear for the majority, there is an opportunity to see new dialogue options or gameplay aspects if one path or dialogue option is chosen over another one.  Each area of the game also has a variety of different NPC characters to talk to, mini-games to try, and of course, the main objectives.  While this might not sound like something groundbreaking, our cooperative experience saw us growing competitive and taking a break from the main path to throw horseshoes, play basketball, baseball, and a near 20 minute button mashing contest in arm wrestling.  You develop a bond with the other player. 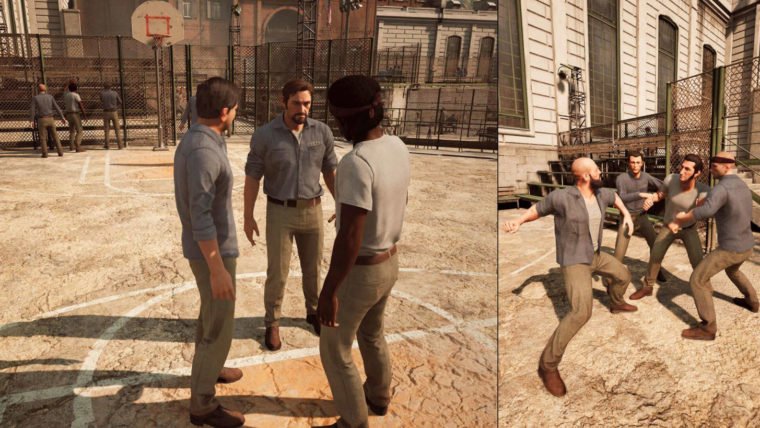 There are plenty of peaks and valleys to the action.  While one moment the game will have you frantically on the run from authorities, the next will see you in a character building segment where players are introduced to the families of the men, humanizing each of the criminals.  By the end of A Way Out you can’t help but to have built an affinity for each, and that’s a testament to the great writing of the game.  A Way Out is on the short side when it comes to run time, but the game uses this time wisely to deliver equal amounts of entertaining gameplay and story.

Labeled as a cooperative action-adventure game, A Way Out draws inspiration from a number of different genres.  You can see the influences of games like Uncharted, Tomb Raider, and Splinter Cell here.  Though Hazelight never leans too heavily on one mechanic and that keeps the game feeling fresh.  You’ll find yourself in a number of different gameplay scenarios none of which are reused.  While it’s clear in many games that there’s a core gameplay loop that the game was built around, and you’ll often see that loop reused over and over again, A Way Out is built around the story and these gameplay settings feel like narrative devices in hindsight.  While there are many fail states in A Way Out, there’s a thoughtful checkpointing system in place here.  There wasn’t a single time in the game where it felt like our progress was for nothing.  The action always seemed to pick back up just at the right moment as to not decrease the momentum that builds throughout.

A Way Out Video Review

In some games, co-op is the best way to play.  In A Way Out, it’s the only way.  The good news is that anyone who purchases A Way Out can invite a friend to play with them and that friend doesn’t have to own the game.  It’s best experienced with a friend, but anyone on your friends list will suffice.  Simply invite them to your game and they’ll be able to download it to play so long as they’re playing with someone who owns the game.  It’s a nice touch for a game like this, but likely the only way this game works commercially.  Of course, you can also play the game locally and both the presentation and functionality is identical.  This is aside from any technical hiccups you might encounter on the networking side of things.  In the pre-launch environment, we had a couple of drops on Xbox Live, but nothing unbearable.

While some of the gameplay and action sequences in A Way Out rival massive AAA releases in the action adventure genre, the very best parts of A Way Out we simply cannot talk about in this review.  There’s one thing that you need to know in whether or not A Way Out is something that you should play.  Do you like cooperative games and do you have a friend to play it with?   If so, A Way Out is an essential “buddy game” with a story that you won’t soon forget.

A Way Out takes some of the very best ideas from action adventure gaming and mixes them with the story telling of a great film.  It’s near perfect in pace and progression, while offering the player plenty of variety across the course of this five hour experience.

A Way Out
"loved"