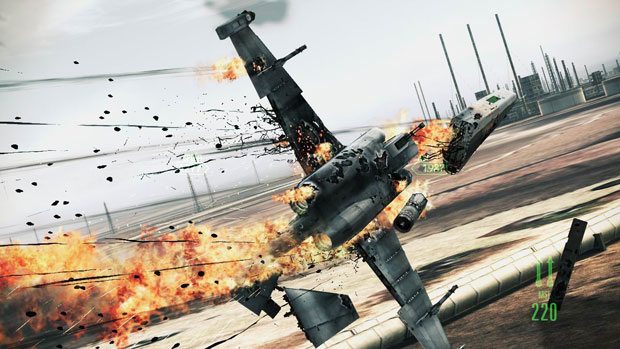 So what happens when a developer goes back to the drawing board to re-invent one of the oldest genres in gaming?  Well, you get Ace Combat: Assault Horizon, for one.  This latest in the Ace Combat series offers a surprising new take not only within the franchise, but the genre.  A strong attention to detail in both environments and vehicles make the game extremely immersive.  When you throw in the new combat mechanics, coupled with the new destructive properties that cap off a dog fight, Ace Combat: Assault Horizon might be the best that Namco Bandai has ever delivered in the franchise’s long history.

As expected,  there is still a very heavy focus on dogfighting, and completing mission objectives in the air.  However, the game’s single player missions do very well to mix in some other types of objectives like manning the mini-gun in a chopper, controlling a Blackhawk Helicopter yourself,  conducting bombing runs, and of course your jet vs jet combat.  The new combat systems have been enhanced to the point where they are much more engaging than they have been in previous games.  Gone are the days where you would constantly circle the skies looking for a missle lock to take down your enemy, Dog Fighting Mode has been introduced to the franchise.

Gone are the days where you would constantly circle the skies looking for a missle lock to take down your enemy, Dog Fighting Mode has been introduced to the franchise.

In the new Dog Fighting mode you’ll become directly engaged with another jet, almost like a game within a game.  Your objective is to keep the enemy in your sights, and take them down with whatever weapons you have.  Guns are free fire, but missles will require you to lock on to the target. Keeping the circle around the target for a set amount of time will reward you with an opening to fire.  Once engaged, eveything becomes more clear.  In DFM, the computer somewhat takes over for you in the controls department.  Some dog fights that you engage in will take you sweeping through cities as your target tries to shake your missle lock, and even pull manuevers where they’ll wind up behind you, where you’ll need to take a defensive stance.  The new combat system is a nice mix between the traditional and the new DFM, as it’s completely optional.  When you get close enough to another fighter to engage, you can.  If you don’t want to, you don’t have to.  Although sometimes, it can be quite tricky to engage with only a split second to react to the button prompt.  The traditional and new ways to play the game mesh well as you are in a constant dance of shaking pursuers and trying to lock your targets.

Equally as impressive as the new gameplay mechanics are the visuals in Ace Combat: Assault Horizon.  Planes break apart, flame, spill oil, and fill the skies with debris upon destruction.  It’s quite cool to take out an enemy and see this carnage on the screen.  It’s much different than any other flight sim or arcade title than I have played in the past.  Real world environments also add to the spectacle, with locations like Miami, Paris, and Washington D.C. all having distinguishable characteristics.  There’s really a nice blend between the traditional and new with Ace Combat: Assault Horizon.  The game is in many ways familiar to it’s predecessors staying true to its roots, while also changing things up pretty drastically.

The added features put the fun back in flying, and the new dog fighting mode is precisely what this genre has been missing.

Assault Horizon offers up plenty when it comes to gameplay choices.  An extensive single player campaign, that has set peice moments that could be likened to a Call of Duty style experience were definitely the highlight of the show.  Though once it’s over, you are free to score attack these mission to your heart’s content with the free play mode.  Partnering up will allow you to take on a selection of missions which all have unique objectives in the game’s cooperative offering.  There’s a persistent experience system that will net you points from playing in the cooperative, or free play modes, as well as the competitive multiplayer.  Using points earned you can unlock different skills for your pilot, and these will drastically effect your capabilities in the air.  These skill sets include Enhanced Machine Guns, Cool Down Reductions, Enhanced Missles, More Munitions, among others, with each having it’s price denoted in the in-game currency.  The competitive modes include Capital Conquest, Domination, and Deathmatch which are quite similar to modes that you would find in many first person shooters.

All in all, I was pleasantly surprised with Ace Combat: Assault Horizon.  The added features put the fun back in flying, and the new dog fighting mode is precisely what this genre has been missing.  The sights and sounds of the game will keep you on the edge of your seat, and some over the top moments will have you questioning exactly what type game you are playing.  While Ace Combat has always put forward a great game, these new elements bring some much needed excitement and immersion back into the genre, which seemed reluctant to change.  If the Ace Combat series intends to build off of these new features, competitors like H.A.W.X. are going to have a tough time keeping up with this break neck pace.