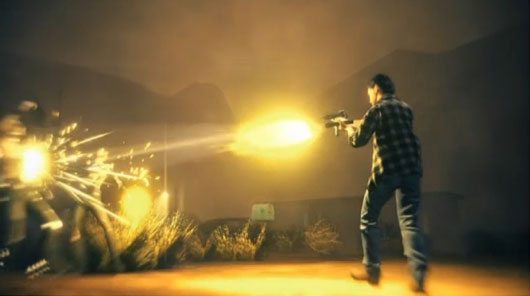 Alan Wake: American Nightmare is an Xbox Live Exclusive title, and is the second installment in the series. The first Alan Wake was a great game, and it’s great to see a second one coming out. The originals’ ending definitely called for a sequel, but American Nightmare acts as more of a standalone title as far as story is concerned. On top of a great 4-6 hour campaign, there’s a substantial Fight Till Dawn mode, which is a great take on standard survival modes. The story may seem a little misleading at times, but ends up explaining itself very well. The overall plot of Alan Wake is fairly simple, but is presented in a way that works really well for the story it tells. The same overarching conflict is prevalent in this one, but it’s more or less removed from the events of the first game.

It really doesn’t feel like it’s been trimmed down at all in terms of quality of content to be a Xbox Live Arcade game. Alan Wake’s American Nightmare feels like a very complete game and achieves all of what it sets out to do. The Arizona Desert is new setting for fans, and makes for some really cool visuals and definitely with its stark contrasts to the Pacific Northwest setting from the original. American Nightmare offers great graphics outside of clunky facial animations and the some odd bad textures. There is a little bit of repetition in the environments as you will revisit the locations in the game, but each time through plays out differently. I felt like the cast of characters while very small, but served their purposes well. It is definitely a lot lighter on narrative and overall dialogue than the 1st, which I am not 100% satisfied with. However I can understand and believe it probably works out better that way, being the shorter standalone experience that it is. There are useful, informative and just cool unlockables and collectables (awesome radio broadcasts are back and sure to especially please fans of the original) strewn throughout the levels. I definitely did some searching just to find 75 % of what there is, so there’s a fair amount there.

One of the major highlights of American Nightmare is the combat, which is awesome. It really features lots of different types of enemies and weapons, and never feels dull a single moment. Its satisfying, unique, and really is some of the coolest, most unique, combat I’ve seen in a game. It is still the same core mechanics as the first; most enemies are shrouded by a darkness that you have to ‘burn’ away before your bullets will harm them. There’s a partially regenerative health system, but to heal completely you have to get to a ‘Safe Haven’ which are scattered around the different areas. After you really get into the combat, American Nightmare challenges you to be thoughtful on how you are going to take a group of varying enemies out. You have to make good use of the spotless Dodge mechanic to keep from being hit, seeing as the AI definitely keeps up with you and doesn’t really give you too much room to breathe mid combat. You have to be aware of what’s around you at all times when you’re fighting if you want to do well. It definitely gets a survival thriller feel across in it’s own way. Broad landscapes where you can see the multitude of enemies getting thrown at you strikes unease as you know you’ll have to be careful to survive. The Fight Till Dawn mode provides an awesome playground to experiment with the combat. You’ll have to survive for 10 minutes until the sun rises, fighting through many waves of enemies on many different levels. Weapons, Ammunition and ‘Safe Havens’ are laid out around the levels, and they’re all fairly large levels.

That being said, levels are definitely guided in the story mode by a set of objectives. The structure of the world on the other hand isn’t noticeably linear at all. There’s good space to wander and collect in each section. It will never feel like a generic experience where your’re walking from corridor to corridor just shooting forward. The story is easy to grasp by itself, but it is definitely worth playing through the first one if you never have. Alan Wake is a great game and playing the original will shed light on some things that will definitely help players appreciate the small details in this “non-sequel”. The combat is vastly improved in American Nightmare, but there is a better connection to the surroundings and characters in the first one. Being more or less separated, I don’t mind the more combat heavy American Nightmare. The combat is phenomenal. Once again, it’s a great installment with it’s own awesome personality. I’m still anxiously awaiting a direct sequel, but I am very pleased with what they have created.

As mentioned above, there are a few visual glitches. The jumping physics are still weird, and the environments as I stated can be mildly repetitive since you visit them multiple times. Hardly game breaking miscues by Remedy, but noticeable nonetheless.  The developer did decide to include watchable episodes akin to those from the original Alan Wake, but I was not a fan this time around, because they simply weren’t as good as the first time around.  A small tradeoff for a considerable discount in price between the two games, but one of the things that was obviously cut to keep Alan Wake’s American Nightmare under budget.  While they explained a few things that were otherwise glazed over, they were frankly kind of weird and out of place half of the time.

Besides the length of the story and overall amount of content, in comparison to great full retail releases quality it is definitely is on par. For $15 it’s hard to find a better buy, really. As a fan of all great games, I can definitively say Alan Wake’s American Nightmare is a no brainer purchase for fans and newcomers to the series alike. You can download it if off the Xbox Live Marketplace for 1200 Microsoft Points. Do it!