Strap up and squad up, we’re gonna hunt some Xenos

So you’re probably approaching this game with a cautiously optimistic mindset. It’s totally understandable. The past major Aliens games that have come out like Isolation and Colonial Marines were barely above okay (though our review of Isolation says otherwise). They also didn’t have that sort of lasting power either. For some reason, it just doesn’t seem like the game adaptations have the same charm like the films starring Sigourney Weaver.

Aliens: Fireteam Elite can ease some of these worries; it’s a game that does better than the aforementioned two. It does better tremendously in the gameplay, but lacks in narrative and longevity.

It’s a three-player, cooperative, third person shooter set 23 years after the original Alien trilogy from ‘79 to ‘92. Play with two other people whether it’s through matchmaking or with friends; there is also an option to play solo with two AI-controlled teammates.

To get the best Aliens experience, it is recommended to play with other people. The AI fill-ins for teammates in this game are barely serviceable on the Standard difficulty. The game doesn’t even recommend that you play with them in your party on anything harder than Standard.

Aliens: Fireteam Elite does a great job in delivering a visually stunning and badass Alien hunting experience. The game plays phenomenally; the gunplay is solid, the customizations and classes are unique, and the enemy varieties force players to play in different styles depending on the threat levels. Unfortunately, while everything else is smooth, the cover system is one of the weaker aspects of the gameplay.

Aliens: Fireteam Elite is also a cover shooter. Think of games like Outriders or Gears of War. It’s a passable system when it wants to work properly, but most of the time, it’s more of a hindrance than anything. The cover system would serve to be really useful in dealing with projectile-based enemies like Spitters and the Weyland-Yutani Synths with guns. Also, deploying certain abilities with your characters awkwardly removes you from cover. It defeats the purpose of deploying abilities while remaining relatively safe. 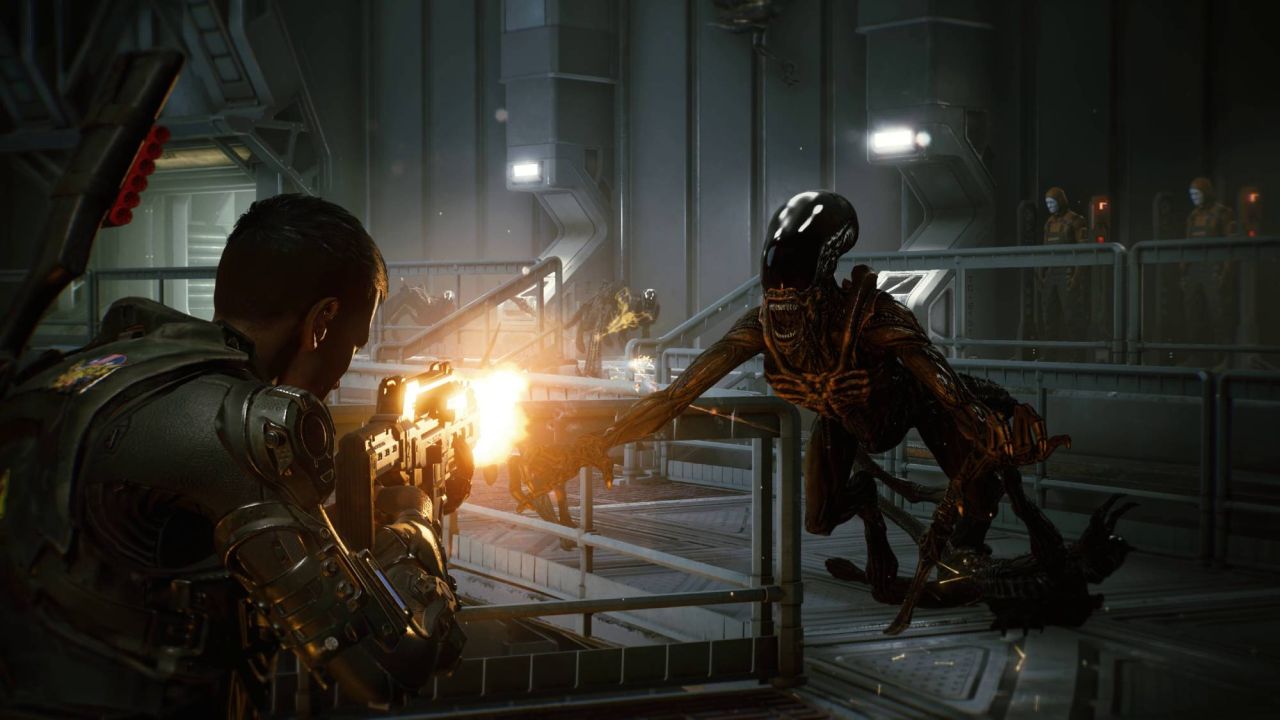 There are some additional problems while taking cover too. It makes clambering over certain walls very cumbersome. There are walls or bits of cover that seem like you can climb over, but just end up dodge rolling into. Sometimes, your character can just miss latching onto a wall for cover entirely, exposing you to enemy attacks. Hopefully this system can be tweaked a bit more because it’ll definitely make certain defensive tactics much more viable.

As for the shooting feel and customization, Aliens: Fireteam Elite delivers this very well. The guns are smooth and responsive. Plus, there is a healthy selection to choose from, giving players more tools to quell the Xenomorph threat. The customization options for each weapon also adds for further build diversity and playstyles. It’s like a looter shooter, but without the annoying RNG grind. Every class will have different weapon categories like hand guns, heavy weapons, CQW (SMGs, shotguns, flamethrowers), and rifles. Some classes will overlap in terms of weapon selection, but they really differentiate in terms of abilities and perks

There are five classes— the Gunner, Demolisher, Technician, Doc, and Recon. The neat thing is that players aren’t tied to one specific class in their playthrough. Roles can be switched at any time outside of a mission. Leveling, though, is separate with each class, so you’ll have to replay some missions to reach a mission’s recommended Combat Rating.

The guns are smooth and responsive. Plus, there is a healthy selection to choose from, giving players more tools to quell the Xenomorph threat.

While the gameplay and combat systems are extremely solid, the mission variety brings them down. For the purpose of this review, spoilers are to be mostly avoided, but every mission has the same structure. Go to an area, upload something or install something, and take down a horde of enemies in an onslaught that follows. Rinse and repeat. The mission variety becomes too predictable and monotonous.

Aliens: Fireteam Elite also doesn’t have a lot of content in it. It has a short story mode with 4 sub-campaigns within them. There’s the Horde mode unlocked after beating the campaign, but it’s just an endless mode with progressively harder enemies until your team is wiped out. As of writing this too, there is only one map available for this mode.

Most of the replayability will be sought out in finding all the collectibles (intel), opening hidden caches, playing on higher difficulties, and using challenge cards to complete missions. The game does get absurdly challenging at later levels, making for some really interesting, higher level play. 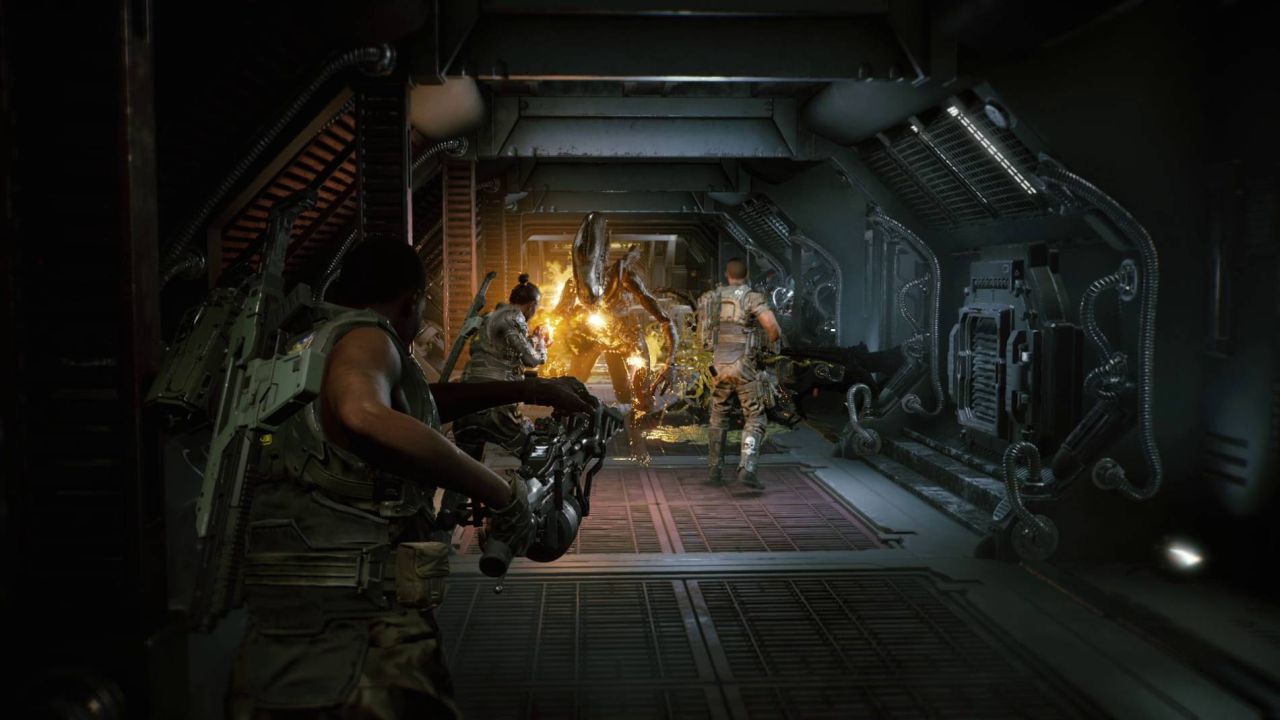 What doesn’t help the game either is the story. There are no cutscenes, but there is a lot of dialogue via NPC comms and interacting with them back at base. You’ll get a lot more lore along the way, but it just feels like an afterthought. It’s never a bad thing that there’s more dialogue and interaction, but the way this game delivers it breaks away from the immersion of the game.

The sad part, though, is the lines were delivered beautifully by the voice actors. The characters have so much potential in them and they were sidelined as chatty NPCs. You could literally go through the game without having to really interact with them other than getting some main story banter. Not to mention, there is a diverse cast of characters of many nationalities, creating an all-star cast. It’s a pity, really. Should the characters have served more prominent roles and were actually more involved in things like cutscenes, this installation of the Aliens game franchise would have overwhelmingly destroyed its past iterations.

Aliens: Fireteam Elite does a lot right when it comes to the core gameplay experience, but lacks in its narrative. It adapts all the good parts of a looter shooter and a zombie-like shooter experience at the cost of some repetitive mission objectives. It’s a fun time to be had, especially in a cooperative setting. The game has an interesting enough gameplay loop to keep players engrossed in its beautifully rendered atmospheres. It offers a more hardcore experience for seasoned players who are looking for tougher challenges, as well as a more casual experience for newcomers.

If you’re looking for a game with an enriching story, you may have to look elsewhere. The inclusion of one doesn’t really do much for the game other than adding new tidbits of lore for the popular Alien franchise.