Aquanox returns, and it could have been worse. 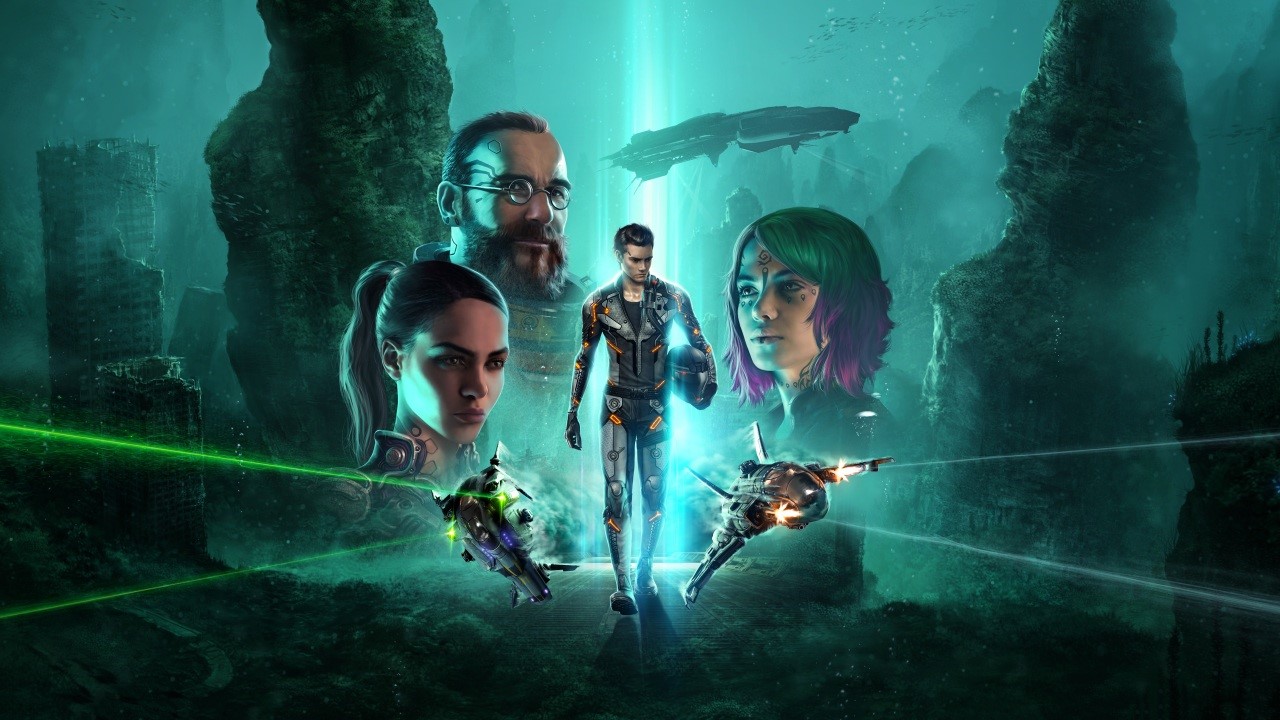 THQ Nordic has been hard at work resurrecting AA gaming, bringing once extinct franchises like Aquanox back to life. It’s been a solid strategy, and heaven knows I’ve been craving some good, relatively solid AA games that haven’t been tailor built to consume hundreds of hours of my life in some desperate attempt to coax me into some some “recurring spending”. Sometimes I just want to sit down with a simple and brainless video game that, while not the most polished or extravagant of affairs, leaves me feeling satisfied.

The first couple of hours with Aquanox: Deep Descent excited me. They weren’t exactly great, but I felt like the potential was there. We haven’t seen a proper Aquanox game in roughly 17 years, and “vehicle” shooters are a little hard to come by these days. Vehicles shooters set underwater in a post-apocalyptic society? Now that’s something we haven’t seen in ages! Suffice to say, I was onboard.

Now that I’ve completed the game’s story I can say Aquanox was indeed a game I played in 2020. Yep, it was . . . a game. Poor Past Brandon; you were so excited in this week’s podcast while discussing the game. Your two hours of playtime had you feeling overly optimistic. If only I could go back and tell you to calm down a bit. I still enjoyed my time with Aquanox, yet by the time the curtain fell and the credits rolled, I couldn’t help but wonder what could have been if Digital Arrow had been able to live up to their lofty Kickstarter promises.

By the way, Aquanox: Deep Descent was a Kickstarter game. I’m not saying that as some form of condemnation, just as a matter of fact. Children born when the last Aquanox was released will soon be legal adults, and THQ Nordic wanted to test the waters and see if anyone was even interested in a new game. While the franchise was more popular in Europe (namely Germany), it wasn’t exactly a marquee franchise. So, Digital Arrow went to Kickstarter to prove to THQ (then Nordic Games) that the world did in fact want a new Aquanox.

And here we are, five years later with the finished product, and it’s . . . it’s a thing that exists, that’s for sure. For the uninitiated, Aquanox is rather simple in concept: you pilot a submarine and shoot other submarines. Movement is similar to a space-sim, sans rolling, and you have a healthy helping of weapons to obliterate your foes with. For a more modern reference think Subnautica, but with guns.

The game has four-player drop in/drop out co-op for the campaign, and a relatively simple peer-to-peer multiplayer component, but you’re likely going to play Aquanox: Deep Descent solo, and it’s a mostly passable experience. The tutorial is a bore, but the first couple of hours in the story stirred my curiosity. I mean, Aquanox didn’t exactly do anything stellar during the intro, but the idea of putzing about in my own personal metal death bubble was intriguing, and the so-so graphics and other quirks were easier to overlook due to THQ Nordic’s AA pedigree. 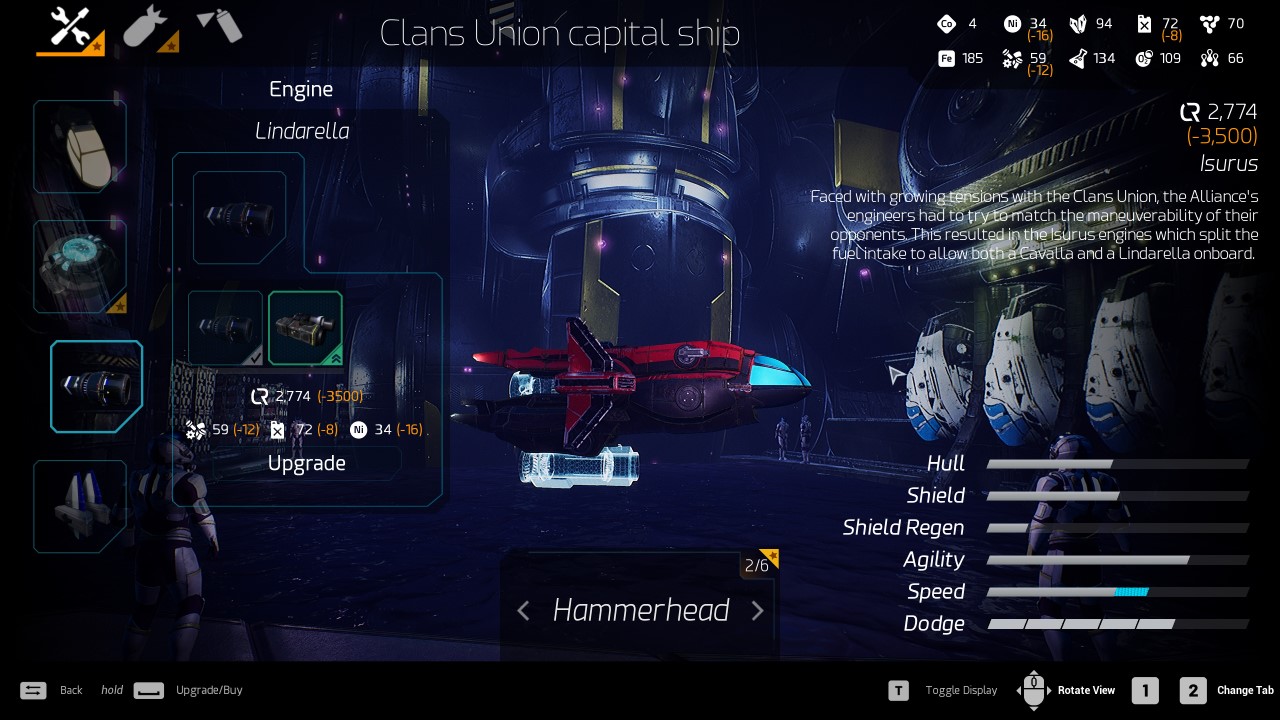 But, oh lord, does Aquanox have some issues that nearly sink the overall experience. For starters, the UI and controls feature an annoying amount of oversights. Why does everything but the journal have a hotkey? Why can’t I unequip weapons I’m no longer using? That second one was a massive pain in my ass little over halfway into the game, because I had found more powerful replacements for much of my arsenal. Yet, I couldn’t remove the older variants from the pool, so whenever I cycled between weapons during a fight I slogged through everything I owned. There’s not even a radial wheel or contextual menu to quickly pick what you want. Just hammer the cycle button and pray you don’t blow past what you wanted.

Those are just a few of the little things that soured my impression of Aquanox: Deep Descent. While not a long game, Aquanox spends far too much time repeating itself over it’s 14-hour playtime. By hour two you’ve seen damn near everything on offer from a gameplay perspective. Enter a zone that looks very similar to the one you just left, dock at the nearest station/ship, talk to an NPC, then either go kill a couple of similar enemies or scavenge some crap from wrecks on the seafloor. Which, by the way, you’re going to be looting an absurd amount of sunken ships and other refuse. Why? Upgrade materials and money!

Aquanox is a vehicle shooter after all, and that means new bits and bobs for your submarine are dolled out as you complete the story (to include additional subs). Most of these need to be crafted, thus the need for upgrade materials. You can technically buy these mats as well, but money isn’t super common in the submerged society of Aqua, so you’ll spend more time selling than buying. Thus the need to pilfer every single scavenge icon that pops on you radar, and shit gets old quick.

That’s Aquanox’s largest issue: it’s so repetitive that tedium sets in rapidly. Somewhat tankier enemies do appear at some point, but the AI remains the same. The zones are mostly the same, but the water is a different color. The stations you dock in all appear roughly the same. The upgraded weapon variants still feel largely the same. You get the point: Aquanox is a whole lot of the same shit over, and over, with very little to break up the monotony.

Yet, despite all that, I still enjoyed my time with the game. Were there times I wanted to plunge Aquanox: Deep Descent into the darkest abyss? Oh yeah! But, I ultimately did vibe with the game. The story is actually decent (though it does have its fair share of stupid leaps in logic), and the voice acting was solid (for the most part). I enjoyed the banter between the four main characters, who felt like a hammier version of the crew from The Expanse (the “lead” even sounds like Holden). Floating around, completing quests for the various colorful NPCs didn’t require much in the way of mental bandwidth, so it was easier to just go with the flow. 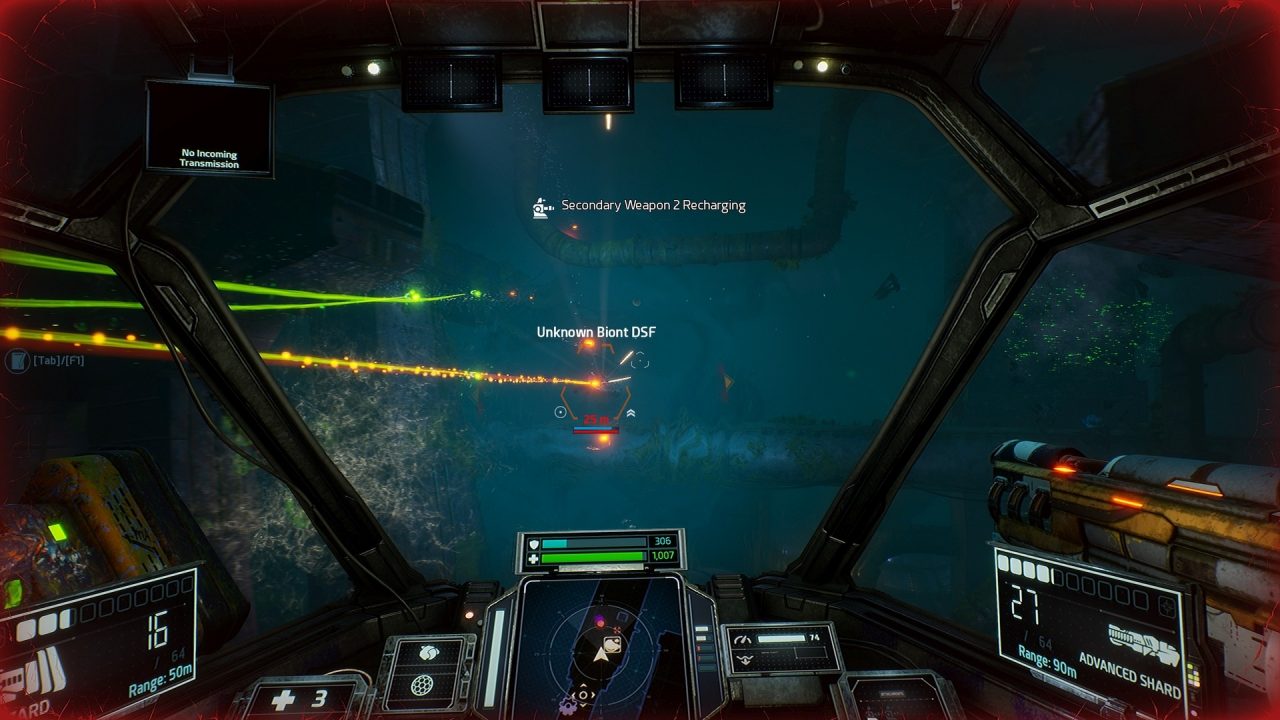 And that’s kind of Aquanox’s one true strength. It’s low on the AA quality totem-pole, but it was vapid enough to not offend, and charming in its own way. Much of Aquanox: Deep Descent is passable, and that may be exactly what fans wanted after all this time: a serviceable reboot that can lead to larger and grander things. It could have been better for sure, but I still had fun with it, warts and all.

I don’t believe Aquanox will break out of its already limited niche, and Kickstarter backers may be miffed by the lack of promised features, but Aquanox: Deep Descent works well enough to justify its existence. Performance is fine, gameplay is fine, story is fine, length and price are fine – Aquanox is just fine. It won’t wow a lot of people, but the people it does impress will be enamored by it. And, you know what, sometimes that’s all you want out of a video game.