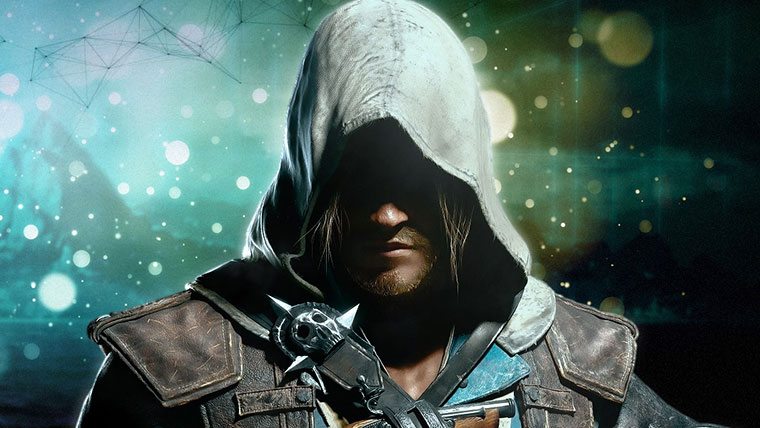 Of the many games that launched as cross-generation titles, Assassin’s Creed 4 stands out on the PlayStation 4 as one game that might be worth a second look on the new hardware.   The pirate-themed adventure is one that was already one of the most outstanding Assassin’s Creed games in recent memory, but the better visuals, PS Vita Remote Play features, and exclusive content, make this one launch title for the PlayStation 4 that could bridge the gap until new games start rolling out in 2014.

Like its predecessors, Assassin’s Creed 4 is another massive historical adventure.  Ubisoft puts players into the shoes of Edward Kenway, direct ancestor of the characters in Assassin’s Creed 3.  It takes some of the most popular features found in the 2012 release, like sailing and sea battles, and builds an impressive game around the premise.  Set in the Caribbean, this Kenway is a pirate, who finds himself thrown into the mix of the series long struggle between the Templars and the Assassins. 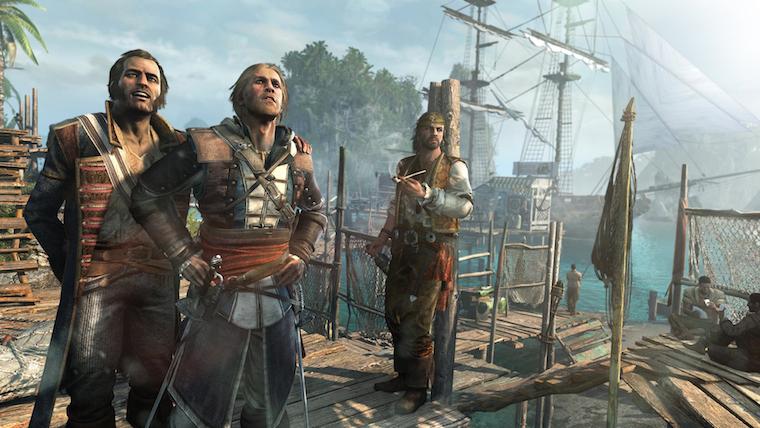 Black Flag on the PS4 isn’t offering anything that really separates it from the last-gen versions, when it comes to gameplay.  It’s a carbon copy of what can be found on the Xbox 360 and PlayStation 3.  The game also relies heavily on a lot of the systems that have been built up throughout the series.  The combat, exploration, and mission structure are wholly familiar to what we’ve seen from the  previous games in the series, games that certainly aren’t lacking in content, and neither is this one.  There is plenty to explore in Black Flag.  The major changes between this game and others in the series is in the significant chunk of sea faring.

Ubisoft has struggled over the years to implement new features into Assassin’s Creed.  These elements have been hit and miss, but naval combat and naval mechanics are a breath of fresh air for the series.  Even though a large portion of the game is built around these mechanics, it feels better blended into what you’ve come to expect from an Assassin’s Creed game.   Your ship, The Jackdaw, is your main method of transportation when hopping from island to island, and there’s plenty of trouble to get into, collectibles to find, and world to explore.  The sense of ownership and upgrade possibilities make exploring all of the sea-faring land-based content in the game a worthwhile experience in progressing your ship’s abilities.

If anything, it’s some of the legacy mission structures and gameplay aspects that really hold this Assassin’s Creed game back.   Assassin’s Creed 4 is a familiar experience on solid ground.  The combat encounters still don’t feel very challenging.  The free running systems still feel like they need some refinement to avoid some of the frequent missteps you can encounter.  The penalty for breaking stealth is minimal, and right from the very beginning, Edward feels like the most powerful man in the city, without ever making any progression to that point.  This stuff doesn’t make the Assassin’s Creed 4 experience a bad one, by any means, it’s just gameplay that feels like it could be refined to make the Assassin’s Creed games even more immersing going forward.   But there is a lot to do on the ground.  Assassination contracts, Synchronization Points, Seashanty Collections, Treasures to be found, and Animus fragments to be discovered — there’s no shortage of things to keep you busy. 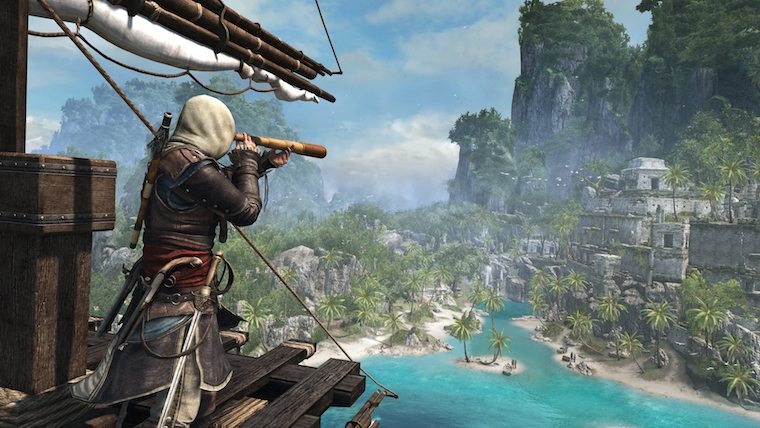 This is something that a lot of open world games never get right.  They offer a lot of content, but there’s never any real hook to get it all done.  In Assassin’s Creed 4, since the naval aspects of the game are so good, you’re inclined to continually progress your adventure through the game’s many ways of earning cash and upgrades for your vessel.  In short, it’s one of the best open world games for those who like to collect.

It’s not the best showcase for what the new hardware can deliver, but it’s impressive regardless.  There’s a distinct visual upgrade when playing on the PlayStation 4.  You’ll get an eyeful of high-resolution textures in the PS4 version of Black Flag.  The ocean and its crashing waves look more realistic.  The lush tropical environments are blooming with color, and impressive vegetation. Just about every facet of the game’s visuals has been improved considerably, and Assassin’s Creed fans will definitely get a glimpse of what to expect from the series going forward — at least when it comes to visuals. 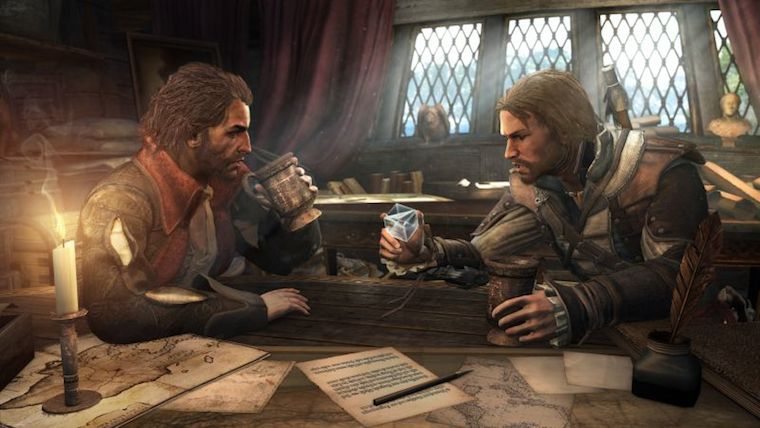 Edward Kenway is one of the more likable protagonists in recent memory.  He’s certainly more interesting that Conor was in Assassin’s Creed 3.  Furthermore, Assassin’s Creed 4 doesn’t follow the same story path that previous games did.  There’s a more natural progression towards Kenway becoming an Assassin.  The way that the story unfolds is more welcoming to those who wish to just explore the life of a pirate in this time period.  The story almost feels secondary for a large portion of the game.  Though it is an interesting one, once Ubisoft decides to start unravelling its threads.  Kenway’s goals at the game’s onset are to simply gain money, the goals are what you would expect from a pirate.  This initial story thread aligns perfectly with what you’re doing for the first half of the game.  Ubisoft still grounds itself with some of its old ties.  You’ve got the Animus, and Abstergo, but it just feels less reliant on these themes to make for a more enjoyable and well told story than it has in the past.  Assassin’s Creed 4: Black Flag is one of the more memorable stories in the series, and one that fans of the franchise should enjoy thoroughly.

For those that own the PlayStation Vita, Assassin’s Creed IV: Black Flag is probably the best showcase for the remote play features that we’ve tested since launch.  While it’s novel in some games, the nature and pace of Black Flag are a natural fit for playing it on the handheld.  The game seems to run more smoothly on the PS Vita than others we’ve played, but it’s not nearly as beautiful as it is in full-blown 1080p.  The most impressive thing is just how well the game blends to the limited control scheme on the device.  And given the sheer size and scope of this game, we’re willing to bet there’s going to be numerous occasions where you’ll want to take your adventure mobile. 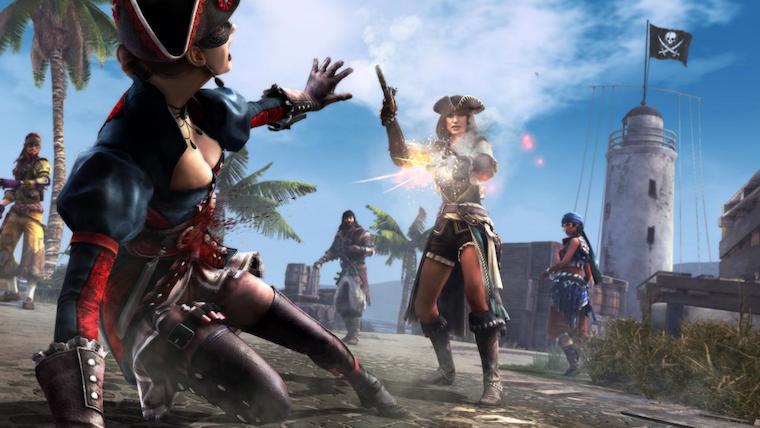 While the storyline of ACIV can run you up to 40 hours to complete in its entirety, there’s a whole world of online content to explore as well.  Following in the tradition set with Brotherhood, this multiplayer has familiar aspects as well as some brand new modes to try out. Black Flag’s multiplayer component is familiar in that it’s themed in the same way as previous games.  The Abstergo labs and Animus aspects of multiplayer are prevalent once again.  Much like your experience in the single player mode, the multiplayer has the same back story that has the Abstergo corporation facilitating all of these pirate-themed competitive and cooperative modes.

A lot of the core features in multiplayer are the same though, with game modes having new iterations.  The very essence of the multiplayer is a hide and seek style mode, where you seek out other players while trying to remain disguised and undetected.  But there are quite a few variations on this premise.  And there are countless variations that can now be established in the game’s new Game Lab feature, which allows players to customize games modes for both public consumption and private matches.

There’s also a new cooperative mode called Wolfpack.   This mode puts players in groups, where they must perform a variety of different tasks.  Teams will be asked to take down assassination targets, defend chests from other pluderers, and other different types of modes that depend on you working with your online friends, instead of against.

All in all, the online offering for Assassin’s Creed 4: Black Flag is one of the biggest we’ve seen, equaling the massive content found in the single player portion of the game.  It’s an acquired taste though.  Assassin’s Creed multiplayer isn’t for everyone, and not everyone will get the hours of enjoyment out of this side of the game that are possible.

Assassin’s Creed 4: Black Flag is right up there with the best games in the series.  Building a game entirely around the sea based features found in ACIII sounded gimmicky when it was announced earlier this year, but Ubisoft nailed it on all fronts.  It’s a beautiful game, it’s fun to play, and it’ll last you tens of hours to complete.  What more can you ask for?  We’ll likely be seeing more of Assassin’s Creed in 2014, and just what’s up their sleeve for the next game, just got a lot more interesting.