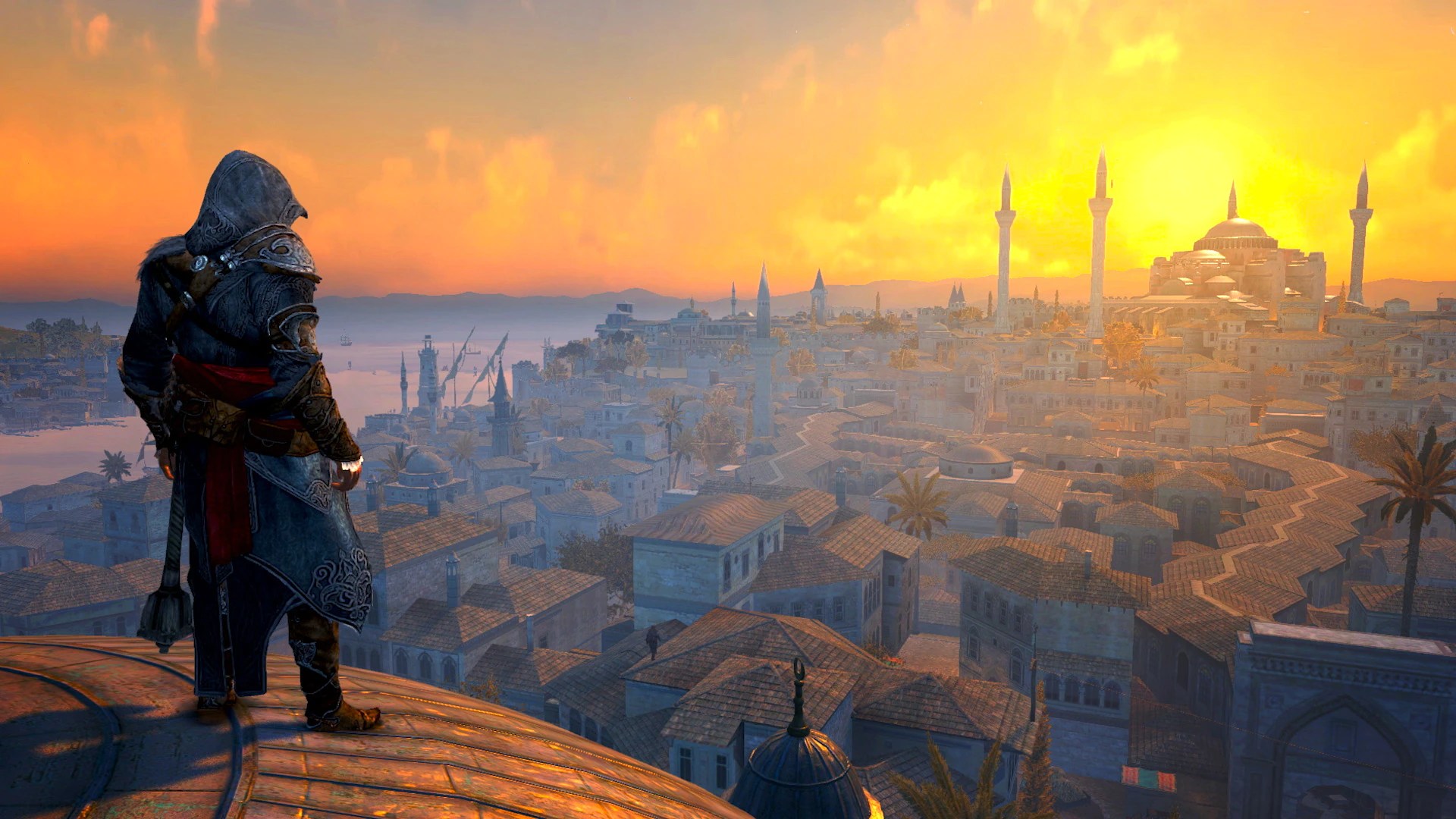 The Ezio Collection runs surprisingly well on Switch. In docked mode, the visuals are superb; Ezio and other main characters look fantastic in both cutscenes and gameplay – if occasionally uncanny, due to the altered models present in all versions of the collection. Handheld mode makes some sacrifices in order to keep each game running smoothly, and this is most notable with minor NPCs. Their models will commonly switch to low-detail versions unless you stand right next to them. Such compromises can subtract from how immersive the games can get, but it’s a worthy sacrifice for how well they run.

Each game runs at a consistent 30 frames per second, whether docked or in handheld mode. While it’s disappointing to see a lack of an option for 60 FPS, it’s still impressive to see The Ezio Collection running so well – even in populated areas. Strangely, cutscenes appear to have variable framerates, likely to keep as much graphical fidelity as possible. There are some moments of clothes clipping into bodies and audio occasionally not playing alongside certain visuals. But the gameplay is smooth, and the visuals are perfectly acceptable; The Ezio Collection might be one of the most well-optimized games for Switch.

Unfortunately, the Switch port comes with a major flaw. During gameplay, it’s highly possible for players to encounter noticeable input lag. This was tested in both handheld mode (with joy-cons attached) and in docked mode (with a pro controller). The issue affects all three games, and it makes certain actions much more difficult than they should be. While it’s possible a future update might fix this problem, it makes for a somewhat frustrating experience – especially during first-person platforming sections from Revelations.

Additionally, each game seems to have some issues with AI pathfinding. NPCs will commonly block the player in ways they shouldn’t, such as riding their horse up a narrow set of stairs. This pathfinding might affect the player and/or major NPCs during cutscenes, as well. Certain missions gave escort targets a head start, leading to an early warning from the game to move closer to them. This issue doesn’t make the game unplayable, but it adds some unnecessary frustration to otherwise fun or informative missions.

When starting The Ezio Collection, players are able to login to Ubisoft Connect. This grants them access to uPlay awards that were available in the original games, such as the armor of Altaïr and additional weapons. All three games come with their single-player DLC in full, as well. Such additions are wonderful to see, especially without further purchases required to experience them.

The Switch version of The Ezio Collection features HD Rumble, an optimized HUD, and even touch screen capability. While these features are nice, they’re hardly must-have additions. The HD Rumble is underutilized outside of cutscenes, the HUD is just about the same as in other versions of the collection, and the touch screen is only available for menus. In a way, these exclusive features feel superficial and gimmicky; it would have been preferable for the developers to forego these features in exchange for further optimization of the Switch port.

The Ezio Collection’s Games and Films 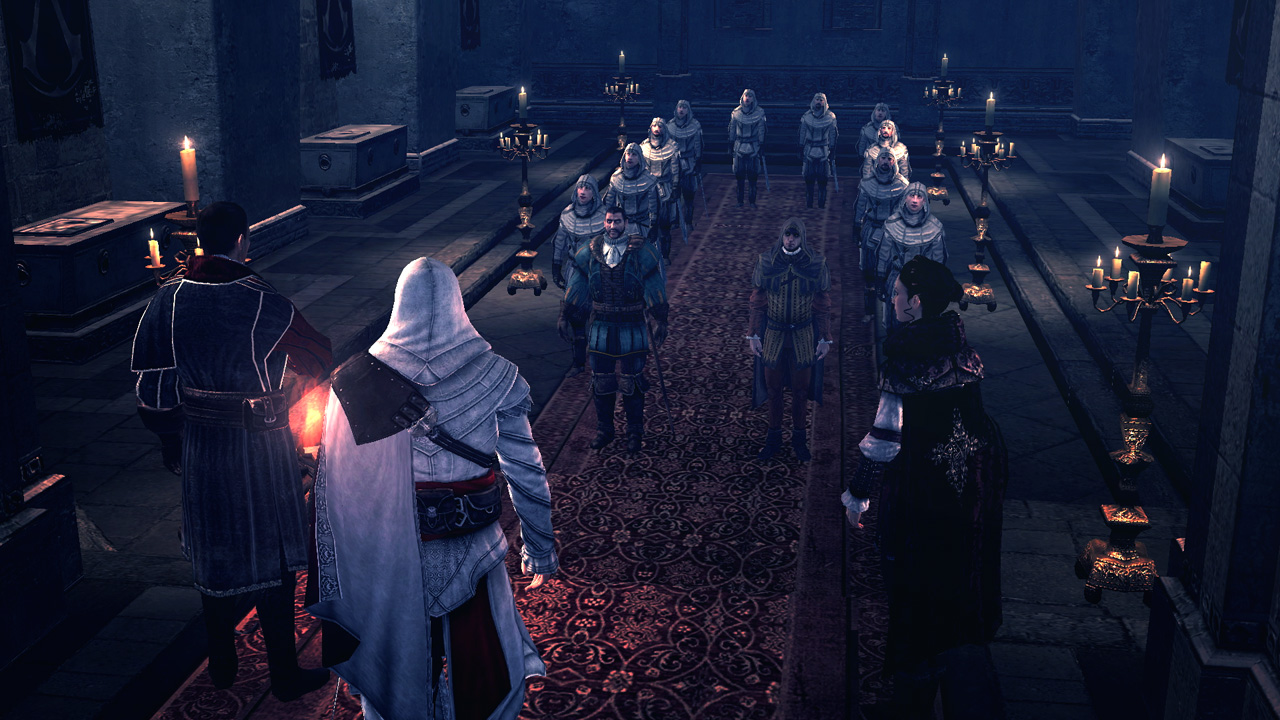 When purchasing The Ezio Collection, players will start out with Assassin’s Creed II all by itself. The rest of the collection will need to be downloaded through the Nintendo eShop. Without the additional downloads, The Ezio Collection takes up around 7 gigabytes of space; with everything included, that number increases to around 35. Anyone interested in this collection should make sure they have a robust microSD card before getting their hands on it.

Despite the aforementioned flaws, each game is still very enjoyable. By taking the role of Desmond Miles, you use a machine called the Animus to relive the lives of your ancestors. While playing as those ancestors, you perform assassinations and battle the villainous Templar Order to ensure humanity keeps its free will. The action-adventure gameplay is kept exactly as the original titles were designed. This might not always be for the better – particularly, Assassin’s Creed II hasn’t aged as well as the other games in this collection – but fans can rest assured that these games are as faithful as they can be.

The only major feature not included by The Ezio Collection is multiplayer, which was featured in the original releases of Brotherhood and Revelations. In the case of the former, this is especially unfortunate, as Brotherhood still uses key art of its multiplayer-exclusive characters when choosing to play it in The Ezio Collection. It’s understandable why such a feature didn’t return, but it would have been fantastic to re-experience the classic frenzy of taking down other players.

Two short films are also included as a bonus, but they do not come with any media options such as pause or rewind. Pressing any button will simply kick players out to the main menu without even keeping their spot. They also don’t keep the Switch from dimming its screen after idling for long enough, so unless you have your power options set otherwise, you’ll need to occasionally jiggle the joystick just to make sure your movie doesn’t shut off while you watch it. They aren’t bad additions, but their implementation is far less than ideal. 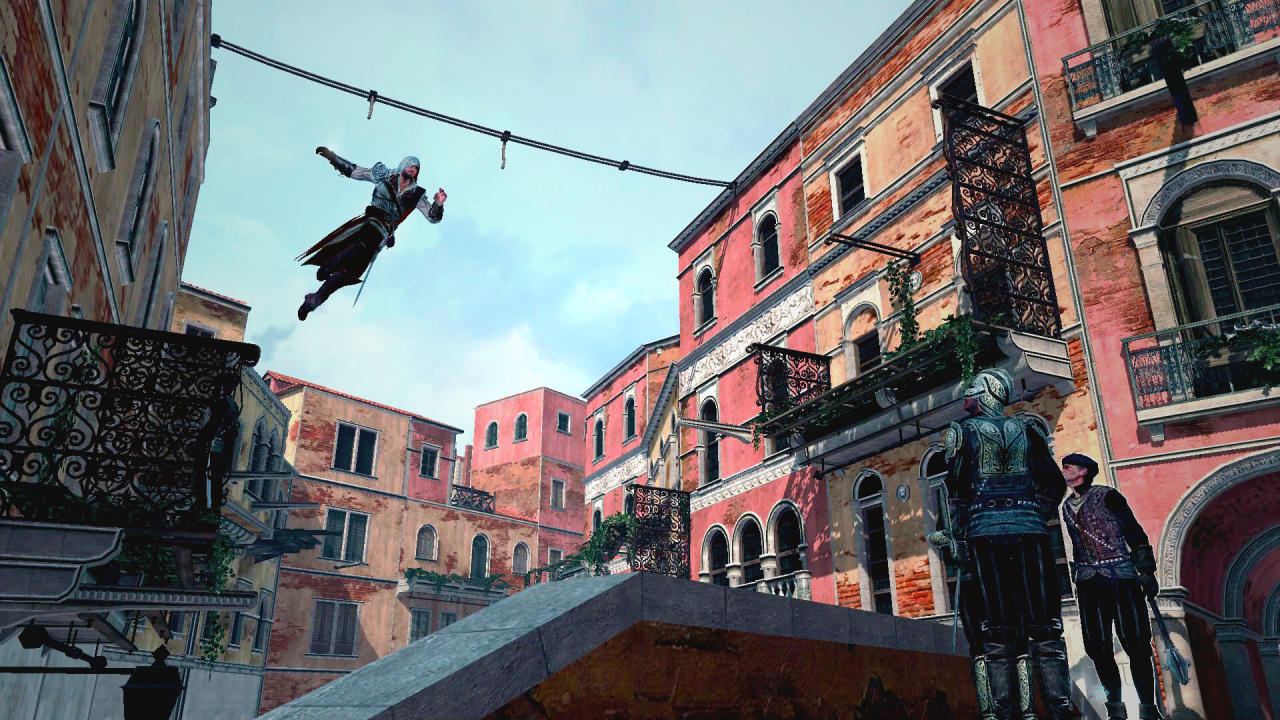 It’s hard to say whether The Ezio Collection’s Switch port should be considered as the definitive way to play classic Assassin’s Creed titles. Notable issues plague each game, from input lag to messy handheld graphics, and the exclusive features have little worth on their own. And yet, despite all these problems, The Ezio Collection still offers an incredibly fun experience with great detail and consistent, smooth gameplay. If you’ve never played these Assassin’s Creed games before, you don’t own a PlayStation or Xbox, or you just want to take the series on the go, The Ezio Collection’s Switch port is unquestionably a must-have.