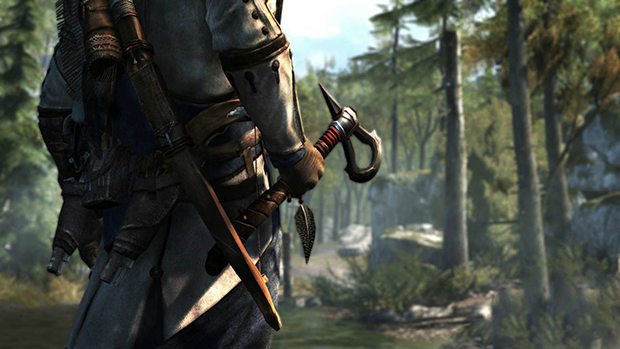 Squint your eyes just a little while playing Assassin’s Creed III, and you’d swear the next generation had arrived. Between the game’s new engine, new setting, new protagonist and cast of characters, Assasssin’s Creed 3 feels like a true rebirth of the franchise. Fans haven’t exactly been crying for innovation over the years, the franchise which launched back in 2007 has seen a steady stream of enhancements in each yearly edition. Assassin’s Creed III is no different. With Ubisoft building on not only the gameplay mechanics from previous games, but bringing a timely resolution to the game’s over-arching storyline, Assassin’s Creed III is the best looking, best playing, and most complete feeling game in the franchise.

The series was due at least a switch in setting, and Colonial America lends itself well to Ubisoft’s alternate history. It’s one where not only are countries waging war in the new world, but where the on-going war between the Templars and Assassins carries on. It’s a rich period in history with plenty for Ubisoft to draw on, and they do so, sucessfully. As customary, Ubisoft sends you back to this era through the Animus, a machine that allows the game’s ‘other main character’ Desmond Miles to relive the memories of his ancestors while meeting a colorful and historic cast of characters from the period.

Perhaps Ubisoft felt it owed its fans more explanation this time around, because unlike our introduction to Ezio, Connor is more fully explained up front than his elders. Assassin’s Creed 3 is a multi-generational affair, where you are with Connor quite literally from conception. Nearly half of the memory sequences in Assassin’s Creed 3 focus on the events in his life that shape him from a boy to a man, his training, and the reasons he chooses the path of the Assassins. This part of the story is told ad nauseam, but is instrumental in adopting this new soldier into the franchise. This time around, the story is better focused and is more linear in its telling, though there is considerable room for improvisation in its progression once out of this lengthy build up.

The story telling will get you invested in Connor’s cause, where he fights not only for the Brotherhood, but for his Native American ancestors and holdings. The game tells the story of this period in history from a vantage point that hasn’t been seen before, at least not in video games. The historical plot lines and the fictional tale of the underlying war between the Templars and Assassin’s is woven together so well, that this inviting world constantly lures you in, taking you off this beaten path more often than not. A variety of different side missions that range from liberating different zones in the cities and taking naval voyages, to building your Homestead and roaming the Frontier as a hunter, can be lengthy distractors from main storyline. The result is a game that feels quite different than its predecessors, yet tells the same brand of story on an even bigger scale than before.

For the most part, Assassin’s Creed III has been tuned to perfection in the gameplay department. Combat is at its brutal best in this latest version, with Connor and his trusty Tomahawk proving right away that he’s a worthy heir. Bloody battles full of parrying and guard breaking attacks have a nice rhythm, where Connor will often take on many adversaries at once. This type of combat is not new to the franchise at all, but does seem to have a better pace than before. Built on the same premises of notoriety that the other games in the series have, Assassin’s Creed 3 will still have you stirring the hornets nest and shaking your pursuers in many instances. Combat isn’t just on the ground anymore, in Assassin’s Creed III Connor has ample opportunity to take to the sea for full scale naval battles as well. Not only beautiful, but this new addition to the game will have you checking the harbors for new missions, and reasons to take to the water at any chance you get. This is just another way, of many, that AC III will take you off of the story path, while still offering rewarding content that doesn’t necessarily further the plot in any way.

Likely the biggest contributor to the fresh-faced feeling that Assassin’s Creed III delivers, is the new game engine that is powering this latest adventure. Anvil Next puts on an impressive display in a number of areas. Enhanced enemy AI will pit you against smarter adversaries, making it less black and white when it comes to stealth and combat. Massive areas with more non-playable characters than has ever been seen in the franchise, lends to the game having a more realistic feeling. Whether that be in a crowded theater or on the revolutionary battlefield, more is certainly better when it comes to characters on screen. The engine definitely delivers on its promises, and seems more than capable of carrying this franchise for the years to come. It houses the best visuals that the franchise has ever seen, character models whether in-game or cinematic look exceptional, and dynamic environments with realistic weather effects are both beautiful and enormous. Unfortunately, with the expansion to the new engine there are also a fair share of bugs to be found in Assassin’s Creed III, one which we encountered in the video above. Draw distance issues and pop-in are also rampant in Assassin’s Creed 3, which is likely a symptom of the game being too ambitious for current generation consoles, or will likely be patched in the near future. While these things are definitely noticeable, they don’t really detract from the experience in the least, but are definitely worth noting.

Despite so many loose ends in the franchise, Ubisoft does a great job of tying it all together between the single player and multiplayer components for the game. Introduced a couple of years back with Assassin’s Creed: Brotherhood, multiplayer is just as important to Assassin’s fans now, as the single player portion of the game. This time around, Ubisoft expands on the premise in some meaningful ways, by introducing a deeper leveling and progression system that allows players to unlock back story segments for the Animus project. Many of the in-game features for the multiplayer will be familiar to those that have played before, you play as an assassin in a cat and mouse battle between making kills and defending yourself from others trying to kill you. Built on the cornerstones of the game’s single player component, hiding amongst the crowd, making daring escapes, and using your powers of observation are just a small part of the Assassin’s Creed 3 multiplayer experience. A new gamemode is also introduced, called Wolfpack. In it, players team up with other assassin’s to eliminate the other team and rack up points in attempt to reach a threshold before time runs out. A much different experience than the lone wolf style of play found in most of the other multiplayer modes, and a welcome addition to the Assassin’s Creed 3 multiplayer portfolio. Long after the single player excitement dries up, which can clock in at 20 hours or more, multiplayer is the gift that keeps on giving for Assassin’s fans, delivering a unique experience that can’t be found in any other online experience.

Ubisoft showed impeccable timing with the introduction of this new game engine, new character and setting for the franchise. Just when you thought that it was going to be the same old Assassin’s Creed on a yearly basis, they’ve come in and shaken things up with great results. Assassin’s Creed III is a beautiful game that’s a blast to play, with a ton of replay value in it’s multiplayer component. Is there anything else?