Atelier Ayesha Plus: The Alchemist Of Dusk Review 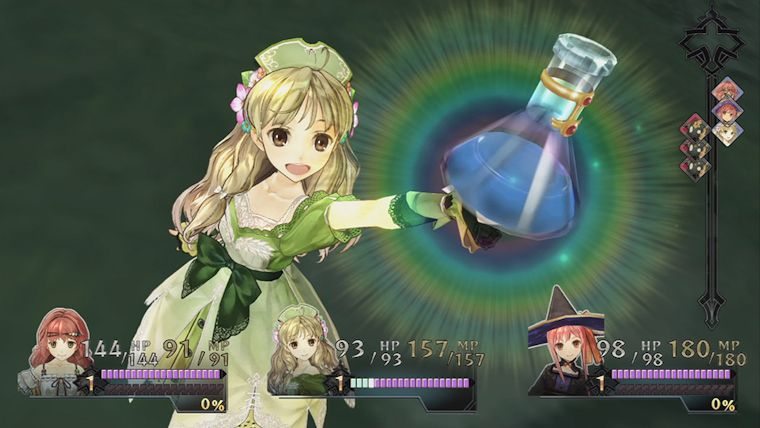 The role-playing game genre comes in many different forms, especially of the Japanese variety. One of the longest and most consistent series in that genre over the last two decades has been the Atelier franchise, which first debuted back in 1997. Since that time, Gust has brought the series to a number of platforms, mostly within the PlayStation family. While Gust has been releasing new games as well, they have had a major focus lately on updating some of the more recent entries in the series under the Plus name. The latest comes in the form of Atelier Ayesha Plus: The Alchemist of Dusk that provides players with uniquely complex, but yet still somehow simple gameplay that can be picked up at anytime.

The Atelier franchise gets its name from the French word for “workshop,” which is exactly what this series is always known to revolve around. Alchemy is front and center yet again. The lead character, the alchemist Ayesha, goes on a journey to find out if her sister is really dead. Considering the story of most games in this franchise are incredibly lighthearted, this is a nice change of pace, adding a level of gravity to the experience. However, the rest of the story is by the book in terms of what one would expect from Atelier, including an abundance of genuine laughs along the way.

The humor found in Atelier Ayesha Plus: The Alchemist of Dusk owes a great deal to the interactions amongst the characters that Ayesha will meet, though the voice acting can be very spotty at times. Many of these characters are ones that the player will run across throughout the game in various locations, with a good number of them being able to be recruited to Ayesha’s party.

This new Plus version of the game actually allows one to switch party members in and out at any time. This is a vast improvement on the old system that made it difficult to switch between the sidequests associated with each possible party member. Each of these sidequests can actually affect the overall story of the game, allowing the player to experience a multitude of different endings.

As per usual with the the Atelier series, the player will scour numerous different locations around the ever growing map to gather materials that can then be made into other items through crafting. The large recruitable party system improves upon the basic gathering system that the series is known for, by providing different gathering items in certain areas depending on which characters are in the party at that time. This prolongs the length of the game by having the player backtrack a few times for better materials, while also infusing some new blood into the typical system players are used to from the franchise. 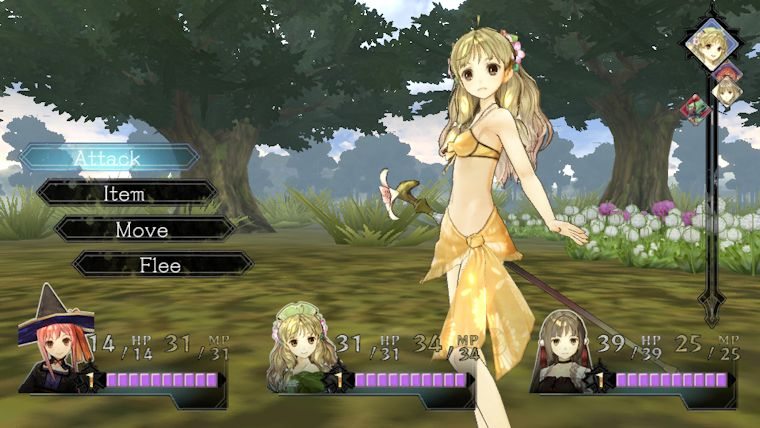 The alchemy system in Atelier Ayesha Plus: The Alchemist of Dusk is a little bit more involved than in the past, with the ability to switch around ingredients to make more potent materials. However, this is something that is entirely superfluous in the game, allowing players the ability to do the minimum and still make it through without much of a problem. Being able to choose the complex or simple route is a great decision for a game like this, as the player can dive right into the world of alchemy, or just use it as a quick means to an end while playing a relaxing game.

Anyone who has played a previous Atelier game will find the battle style here very familiar, which is not exactly a bad thing in a series like this. Ayesha is only able to use basic attacks in battle, but her strength comes from the use of items. This mixes in the alchemy side of the game perfectly, allowing the player to craft the strongest attack or health items to use on the battlefield.

The other party members have a range of attacks, from brutish to magical. Players are given the ability to pick which two party members accompany Ayesha at any time, there is a lot of customization available. The always present Active Commands are back, adding another layer of strategy and complexity to the battle. This is one of the most unique elements of the Atelier series and is used exceptionally well in The Alchemist of Dusk.

As a result of the gameplay style, the battles themselves manage to run very efficiently, but one element that has plagued the Atelier franchise for awhile now is the prevalence of frame rate issues, and that is once again one of the biggest problems in Atelier Ayesha Plus: The Alchemist of Dusk. At times the game will run as smooth as silk within the exploration sections and battle sequences, where one can experience the beautiful cel-shaded backgrounds and character designs, but there are others where the slowdown is absolutely ridiculous. This seemed to mostly occur upon entering new areas when NPCs first make their way onto the screen. This can grow tiresome, but luckily the slow moving gameplay is not hindered too much by the slowdown. 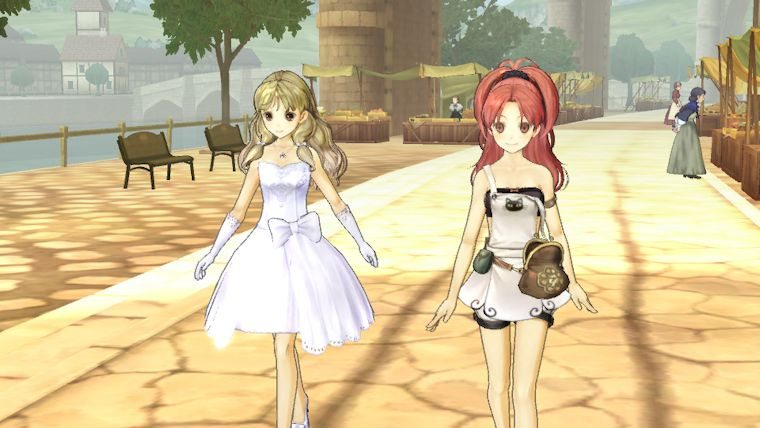 The Atelier series itself has almost always had a very relaxed combat system, but there have been a variety of different types of time limits imposed on the player elsewhere. The Alchemist of Dusk offers one that is less strict than the last game. That game, Atelier Rorona Plus, had a series of tasks that had to be finished within much shorter time spans, making it a very real possibility that players  might not finish what they were tasked with due to these constraints. However, Alchemist of Dusk features a much more forgiving system that is ancillary for the most part, outside of the timing of some minor events. This is both good and bad, as the player can relax and enjoy the game itself, with little sense of urgency.

Atelier Ayesha Plus: The Alchemist of Dusk is the latest in the line of remakes for the series, this time making its way to Sony’s PS Vita handheld. Providing players with the highly addictive gathering and crafting system of the original, Gust ups the ante with not only the previous DLC for the game, but also the ability to switch party members at will. Afflicted with massive frame rate issues at times, Atelier Ayesha Plus: The Alchemist of Dusk manages to stand out from the rest of the Atelier series and serves as an excellent RPG option for anyone with a PS Vita.

Atelier Ayesha: The Alchemist of Dusk