Atelier Rorona Plus: The Alchemist of Arland Review 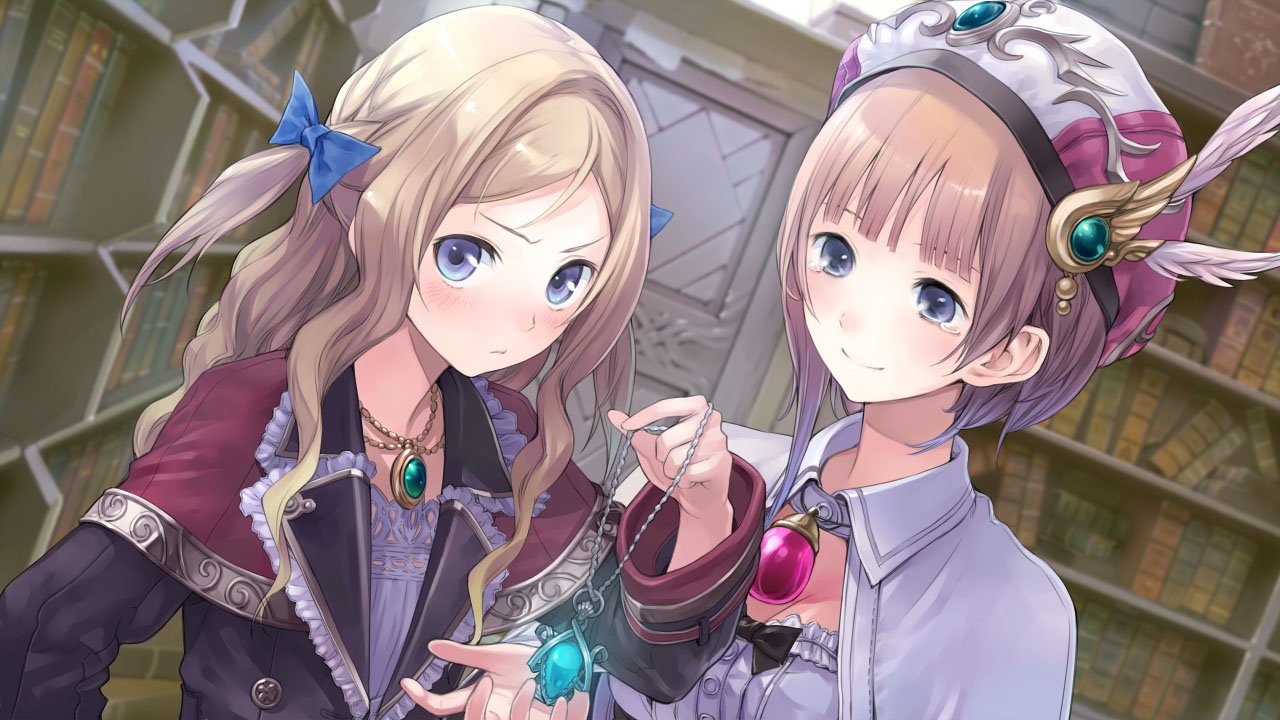 When a mainstream audience thinks of Japanese RPGs, they typically first think of games like Final Fantasy, Dragon Quest, or even the Shin Megami Tensei series. However, one franchise that must not be forgotten is the Atelier series that has been running since 1997 in Japan. Sticking exclusively to PlayStation consoles for the mainline games in the series, Atelier games have also made their way to both Sony and Nintendo handhelds, among other platforms, for some of the spinoff and remake games. The latest release in the series is actually a remake of a former PlayStation 3 game, this time updated for release once again on PlayStation 3, as well as PS Vita, now known as Atelier Rorona Plus: The Alchemist of Arland. For the purposes of this review, we played the PlayStation 3 version of the game.

When you first start the game, you will be introduced to the lead protagonist right away, Rorona, who is currently studying under her teacher and mentor Astrid. As with a lot of the female protagonists in this series, Rorona is portrayed as a little childlike and unsure of herself at first, but has a good heart throughout. She enjoys the simple things in life, such as baking pies, but is quickly thrust into a high pressure situation, for the Atelier series anyways, that if not handled correctly could spell the end for Astrid’s workshop. 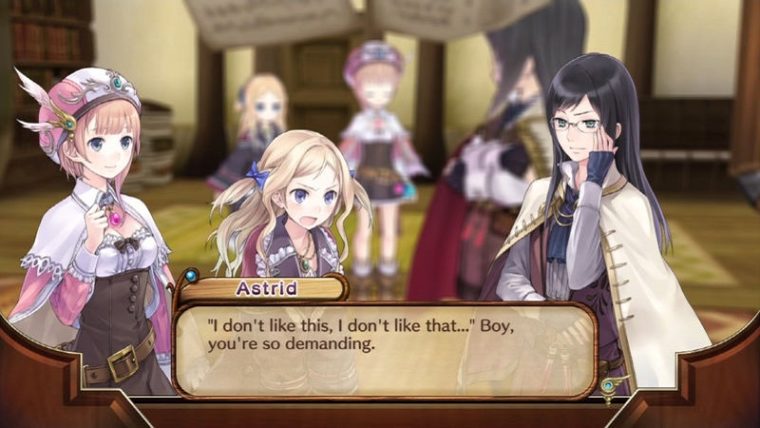 Rorona builds relationships with a number of different characters throughout the game, as well as plenty of preexisting ones as well. The relationship found between her and her teacher Astrid is a little bit strange, with an almost unneeded level of sexual tension presented by Astrid. This comes from Astrid discussing how they should share a bed and what she did to her while she was sleeping the night before. It just felt awkward, especially considering the type of game it was. However, after that strange segment, the scenes between the two are much better, even though she has some strange orders, such as telling Rorona she cannot bake any longer.

Rorona comes across characters she has known most of her life, like her childhood friend Cordelia. This somewhat mysterious character is the first one you will see join your party in the game, but can get a little pouty at times. The early antagonist in the game seems like Sterk, who is the one delivering messages about how the workshop must close down if they do not prove themselves. However, he will soon become a great help, which is most hilariously done by failing the first assignment and seeing a hilarious scene involving Astrid and Sterk’s past.

The main focus of the Atelier series has always been alchemy and that doesn’t change at all here.

Overall, the story is not very intense as while there is a time limit, you are playing at your own pace a lot of the time. If you know what you are doing, you can complete most every assignment relatively quickly, which allows for sidequests and exploration in the remaining days. If you are going into this game expecting a grand story of Final Fantasy standards, you will be extremely disappointed. However, that is not what this type of game is meant to be. It does kind of go a little slow as a result, but that is one of the elements that makes this game appealing.

You can sit down and relax while playing in a very low stress environment. If you want to go level up, feel free to do so in battles. If you want to spend your days in the workshop, you can do that also. If you really just don’t care and want to see how the story unfolds, you can just sleep through every period and complete the game extremely fast. This is definitely not recommended as you miss out on way too much and there is almost no point to even playing the game if you are going to do that, but the choice is there regardless.

The main focus of the Atelier series has always been alchemy and that doesn’t change at all here. While this new version of the game did revamp the system a bit, the basic elements of alchemy are what you should expect from the series if you’ve played any of the recent entries, such as Atelier Escha & Logy: Alchemists of the Dusk Sky.

Rorona and her party will go out to a variety of different environments, which are each split up into a number of fairly small 3D locations. While here, you can collect all of the alchemy ingredients spread across the area, with plenty of enemies around as well. Fighting these enemies is not required technically, but if you ever want to survive later in the game, it is a smart idea to fight often. Rorona’s basket will be filled with these ingredients and once it is full, you must head back to the workshop to drop what you collected off to use to make other items. 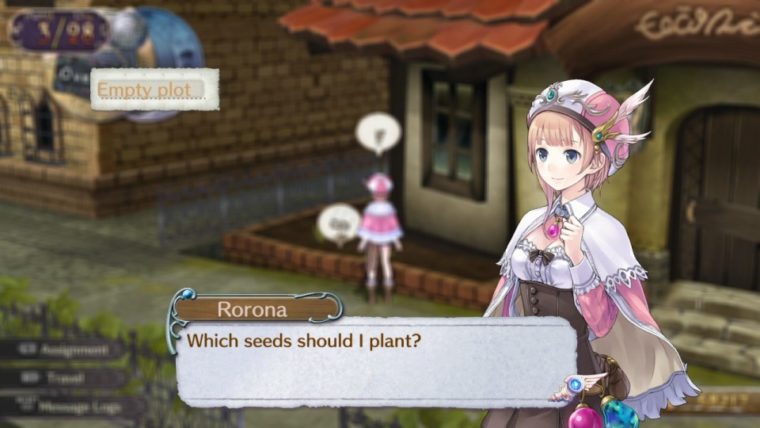 The various assignments in the game will ask for specific items as a rule, though sometimes they will be a little more vague, such as only asking for food items rather than specific food items. Besides the official assignments that typically last three months, there are tons of sidequests you can embark on throughout the game. A majority of these are taken on through Esty at the front desk, which a lot of the time are an extremely easy way to make money each day, as you likely have a lot of the requested ingredients from your regular travels. There are also a number of bonuses each assignment period for completing specific tasks given by Sterk, which may provide money, attack upgrades, health upgrades, and more. This is a nice addition to the game that gives you even more reason to complete side tasks outside of the main assignment.

Speaking of money, obtaining coins is very vital to your success in Atelier Rorona Plus: The Alchemist of Arland. Unlike Escha & Logy, you actually have to hire your party members, and some charge pretty hefty prices. Specifically, Sterk will cost you a premium early in the game, but he is more than worth it. When you can first hire him during the second assignment, it may take a good majority of your current income. However, his much higher level helps you to advance much quicker in the game, which prevents you from having to grind quite as often for levels in the game. If you are short on money, taking on the very simple quests from Esty is a great way to make quick coin.

The battle system is also fairly similar to Escha & Logy, but with a few changes. Rorona will always be in your party, along with two other members. At first, Rorona may not be too strong as a physical attacker, but luckily you can actually use items from your basket, such as bombs or healing items. As time goes on, she becomes pretty formidable. The early team I assembled was Rorona, Sterk, and Iksel, which happened to be my favorite trio to use in the game. Iksel is very important as one of his special skills allows him to heal one party member, which is vital in battle at times, especially when ambushed. You will also meet plenty of other characters that can join your party, such as Lionela, but I’ll wait to let you be introduced to them for yourselves.

The assist battle system returns in Atelier Rorona Plus: The Alchemist of Arland, but unlike Escha & Logy, you can only only protect Rorona, rather than any character in the party. If Rorona’s assist bar is at one or higher and is attacked, one of the other two party members can jump in the way instead and take reduced damage, while completely protecting Rorona. Also, if Rorona uses a skill attack, one of your two party members can do an additional attack by using up the assist bar. As a result, it is important to figure out which one is the best depending on the situation. This level of strategy really takes the gameplay up a notch and makes each battle different from the last.

The voice acting in this game is pretty solid most of the time, but is nothing spectacular. The only moment that truly bugged me was the voice actress used for both Horoholo and Cole, who are introduced very close together in the game. These are voiced by the same person, the prevalent voice actress Mona Marshall, and happens to use almost the exact same voice for both. The music is also fun to listen to throughout. It’s nothing standout, but does the job well with a majority of the soundtrack featuring lighthearted and joyful tunes. 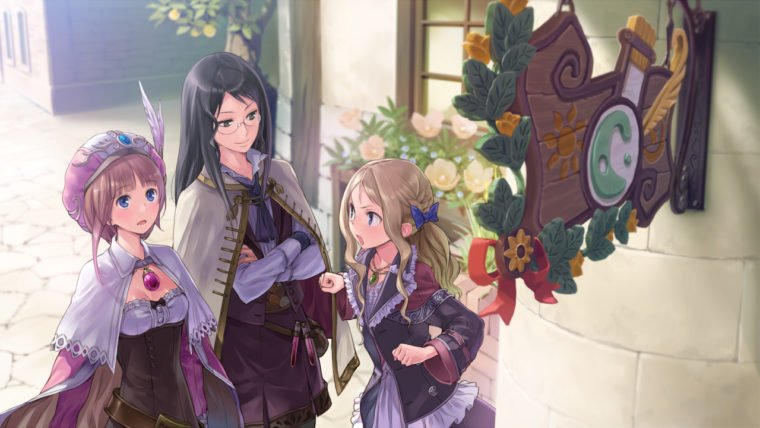 This remake was said to have updated the game with new 3D models, but it still tends to stick to 2D animations for talks between the character. There are some strange decisions with the battle animations, such as only the enemy you are specifically targeting at that time showing up when you attack. Regardless, the animation style looks great with both styles throughout the game.

Atelier Rorona Plus: The Alchemist of Arland is for the most part what you would expect from the Atelier series, especially as a remake of a past game in the series. The game featured a fun and lighthearted story that you will likely not get too invested in, but still can enjoy anyways. The characters are unique and have some funny interactions throughout, though some of these do get a little strange at times. If you are a fan of the Atelier series already, this is a must play as its provides more of the intriguing gameplay alchemy based gameplay that isn’t found in too many other games. Even if you haven’t played any Atelier games before, Atelier Rorona Plus: The Alchemist of Arland could easily serve as a good jumping on point as well, especially with it being the first in this specific trilogy of games.

Atelier Rorona Plus: The Alchemist of Arland