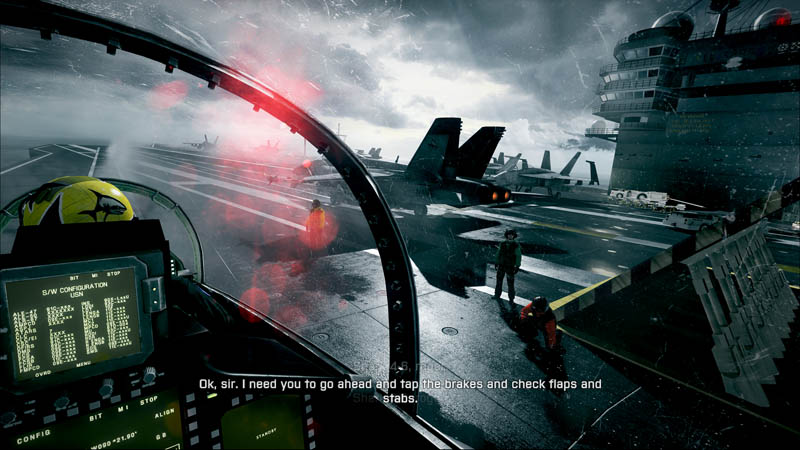 Before there was Modern Warfare in the video game world, there was Modern Combat.  After the 2005 release of Battlefield 2,  we have yet to see a numbered game in the Battlefield franchise.  For the first time on consoles, DICE brought it’s popular PC shooter to the masses, with its brilliant vehicular based gameplay, sandbox feel, and wide open battlefields of the game.  Since then, DICE took us into the world of Bad Company, but for true blue fans of the franchise, Battlefield 3 is the game they have been waiting for.  The question is, is it all it’s been hyped up to be?  The short answer is yes.  The game lives up to the hype and DICE’s near mastery of the genre puts forth one of the best multiplayer shooters of this generation.

The Bad Company games have given DICE a very strong starting point for Battlefield 3, introducing the completely refined Frostbite 2 Engine,  the game is simply a marvel to look at on consoles.  With so much made of it’s shortcomings when compared to the PC counterpart, this pre-release hype left many wondering if the console version of the game would be able to hit the same high marks.  Thankfully it does.  The game looks and plays better than Bad Company 1 & 2, and the optional texture pack on the Xbox 360 exhibits some obscenely good graphics in the process.  Lighting and particle effects are some of the best I’ve seen on consoles, and  the action can get quite tense, no matter what game mode you are playing.  DICE has officially nailed the whole immersion thing  when it comes to those that are looking to get the bejeezus scared out of them while playing a shooter.  Sound design and subtle graphics cues deliver gun fights that just aren’t found anywhere else.  Whether it be bullets whizzing overhead, the rumbling of an enemy tank that is searching for its next victim, or the screech of jet fighters over the battlefield, there is always ample opportunity for each round of multiplayer, campaign, or co-op  to feel unique.

There is always ample opportunity for each round of multiplayer, campaign, or co-op  to feel unique.

Battlefield 3 is not the complete overhaul that many had expected it to be.  Probably realizing that there was little wrong with the gameplay design of the Bad Company series, DICE has elected to keep many of the same gameplay elements from the last two games.  The core gun and vehicle gameplay feels eerily familiar to the Bad Company games, with some added enhancements and shifts to the multiplayer loadouts. What is new is DICE’s continuing journey into the single player side of the game.  With each offering getting better since Battlefield Bad Company, Battlefield 3 does feature a rather exceptional single player portion of the game.  This single player campaign probably shows off the best parts about the new engine.  Some amazing sequences display destruction on a massive scale, as well as offering up some interesting single player vehicle missions.  The story may be somewhat contrived at this point, but the action on screen will have you forgiving the me-too story telling.

But it’s not the single player in Battlefield games that have gotten the franchise to this point.  It’s the multiplayer, and boy does Battlefield 3 have it in spades.  As I mentioned above, the squad style gameplay has been changed ever so slightly to incorporate new features for your favorite classes.  Assault and Medic classes have now become a single entity, and it allows for players to attack while also having the ability to revive downed teammates. This makes for some pretty intense battles where squads will duke it out over long corridors or corners, with the likelihood of one of those players having revive capabilities, these battles can become more extended than they have in the past.  Tweaks to the recon class have hindered the popular camping kit with scope reflections that can be seen by other players, and the support kit offers players the ability to pin enemies down while their teammates mop them up.  With nine maps included in the standard version of the game, Battlefield 3 offers quite a bit of variety when it comes to locale.  From wide open levels like Caspian Border, suited for vehicular gameplay, to the tight corridors of Operation Metro, there is literally something for everyone’s taste in Battlefield 3’s multiplayer.  Narrowing that focus further, the game also deviates from the Rush mode, with the traditional Conquest mode, and Team Deathmatch gameplay as well.

Battlefield 3 is not the complete overhaul that many had expected it to be.

DICE’s intention with Battlefield  3 Multiplayer is clearly to keep the player engaged for as long as possible.  The new Battlelog features and Progression System are both implemented well enough to accomplish this.  While it’s not quite as encompassing as the PC’s version of Battlelog, players on console will still be able to utilize some of the features of the web based service by enrolling their ID on EA’s servers. Your Battlefeed will allow you to keep track of friends and their progression in Battlefield 3, which is easily viewed at the title screen for the game.  While the Battlelog features on consoles are less intrusive than its PC counterpart, you may find this to be a benefit because its much easier to find a match and hop in and out with friends on consoles.  The new progression system in Battlefield 3 will have you tirelessly grinding away to unlock the upper echelon weapons and perks of the game.  Each kit has its own unlockables, and each point earned on the battlefield will go towards unlocking something.  Have a killer round in a tank, and you’ll likely earn points towards unlockables that pertain to the tank, with the same thing going for each weapon in the game.  There’s also an overarching skill points system that will unlock items for all classes.  It’s a serious system that DICE has already said could take quite a while for even the hardest of the hardcore to unlock all pieces.  Nevertheless, it definitely keeps you engaged in how you are performing on the field of play.

Battlefield 3 is by no means perfect.  For anyone that played the beta of the game, you saw that there were some hiccups on consoles.  While DICE did an amazing job and adhered to their word when it comes down to fixing the majority of the complaints during the beta, some problems definitely still do persist in the game.  Texture pop-in, screen tearing, and clipping all show up enough to warrant their mention, but don’t really make a huge difference in the way that the game plays.  Aside from these occasional graphical missteps, the game plays night and day compared to the beta, and has a much smoother feel to the action than it had.  Server issues might have been the root of some of the problems, but aside from the normal lag that crops up, the game does well even when the 24 person servers are maxed out.  Of course, this wouldn’t be a Battlefield 3 complaints section without the mention of other players.  It is simply mind boggling that some players still don’t use their kits and their capabilities when playing online.  When it all comes together and players use their ammo drops and health kits as they should, the game rocks.  When they don’t,  it can be somewhat frustrating.  Battlefield 3 is definitely not the game for players that don’t like to communicate with their teammates and fight for the win, instead of for personal statistics.  Hopefully as more players return to the battlefield and learn to use the tools that DICE has put forth this team aspect can be adopted on a wider scale.

I think the true measure of Battlefield 3 is the fact that you can’t replicate what you’ll find in any given game you play.  The destruction, coupled with vehicles, huge maps, and variety of weapons, give each match a very distinct feel.  While the Campaign and Cooperative gamemodes are nice added bonuses and some may say the best in the developer’s history, they aren’t the real reason you should be purchasing Battlefield 3.  That reason is multiplayer, and it doesn’t get much better than Battlefield 3 when it comes to that, despite some of its more superficial flaws.