Not the return that fans have been waiting for. 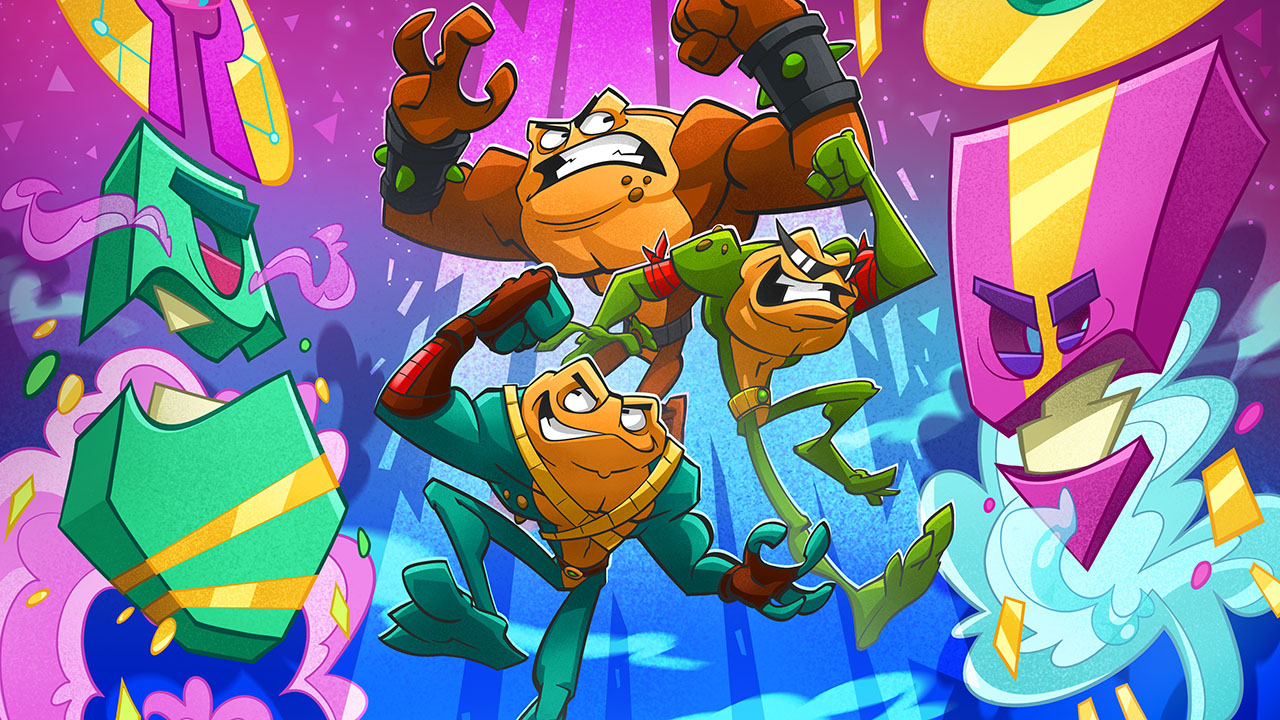 The Nintendo Entertainment System was known for its large library of insanely difficult games, which led to the term “NES Hard” being coined by gamers over the years. There is zero question that Battletoads was one of those very games, which was a completely original IP that was trying to build off of the very successful Teenage Mutant Ninja Turtles franchise. After a few different releases across the SNES, Game Boy, and Arcade, including a crossover game with Double Dragon, the series went on hiatus for more than two decades. The series regained a little life with the inclusion of the original on Rare Replay and guest appearances in Killer Instinct and certain versions of Shovel Knight, but it has returned with a brand new game known as Battletoads.

Battletoads has always been known for its over the top characters and story as a whole, which is very much the case in this return for the series. The reboot starts 26 years after we last saw the likes of Rash, Zitz, and Pimple, who are discovered in a space vessel that had them living a simulation all these years where they believed themselves to be heroes after saving the galaxy from the Dark Queen. However, no one even knows who they are once they are rescued, much less see them as heroes. 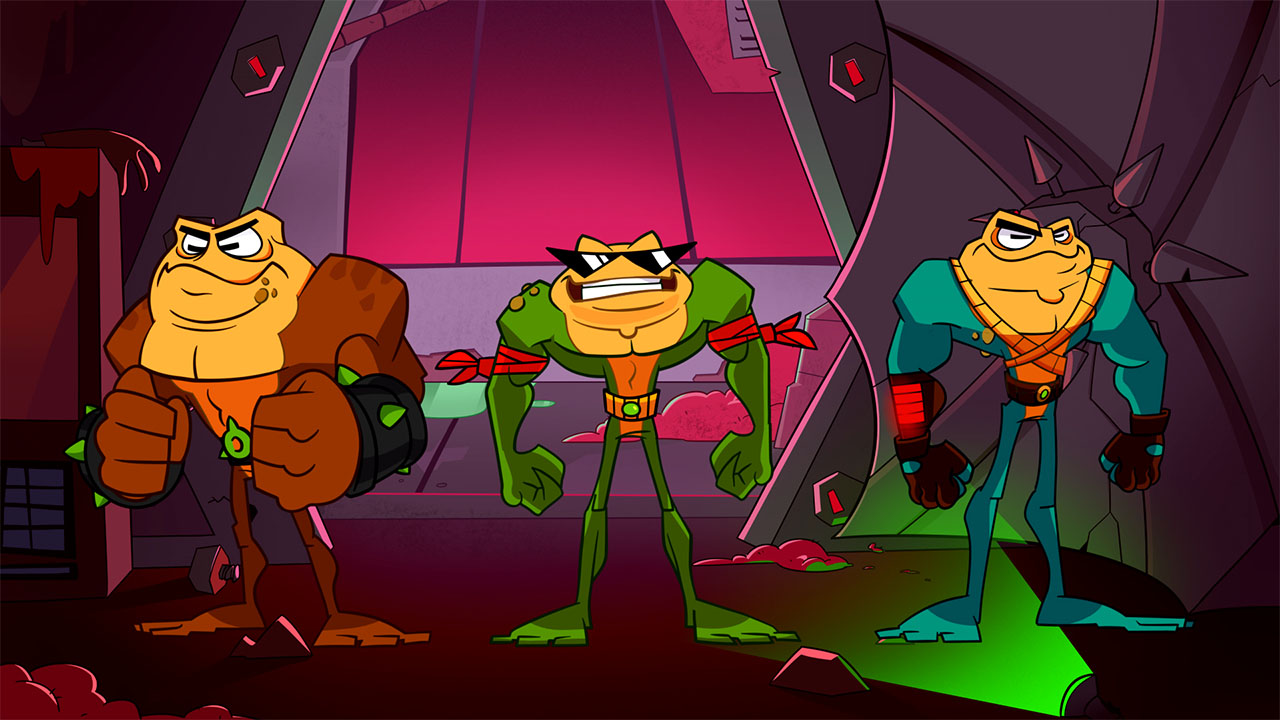 While Zitz and Pimple have settled into normal jobs working at an email factory and as a masseuse respectively, Rash is far from satisfied and talks the others into going with him to find and take down the Dark Queen yet again. When they come across the Dark Queen though, they discover that she is being held prisoner by a race of alien creatures known as the Topians. This leads them to form an uneasy alliance with one another as they try to take down the Topians together.

The previous games may be more than 25 years old, but Rare managed to inject humor into the them even with the limitations of the era. Dlala Studios takes that very base idea and runs with it to the extreme in this new Battletoads game. Zitz and Pimple essentially play the straight man to Rash’s very zany character, which is much needed in this game. Rash has always been the fan favorite, which is why he was chosen for Killer Instinct, but he almost feels like too much of a caricature in this game. There are some effective running gags throughout the game though, including Rash always bringing up if the trio are brothers or not and the fact it has never really been addressed. There are definitely some people that won’t enjoy the type of humor found in the game, but it’s pretty harmless overall.

Fitting in with this more overtly comedic version of Battletoads is an even more cartoon-like animation style that is definitely going to be pretty divisive. Personally, I would have much preferred a more modern take on the classic style that fans know and love. Instead, the reboot tries something completely new with what almost feels like like it would have been taken from a Cartoon Network series instead. This is seen with not only the backgrounds and the environments, but also the characters themselves. 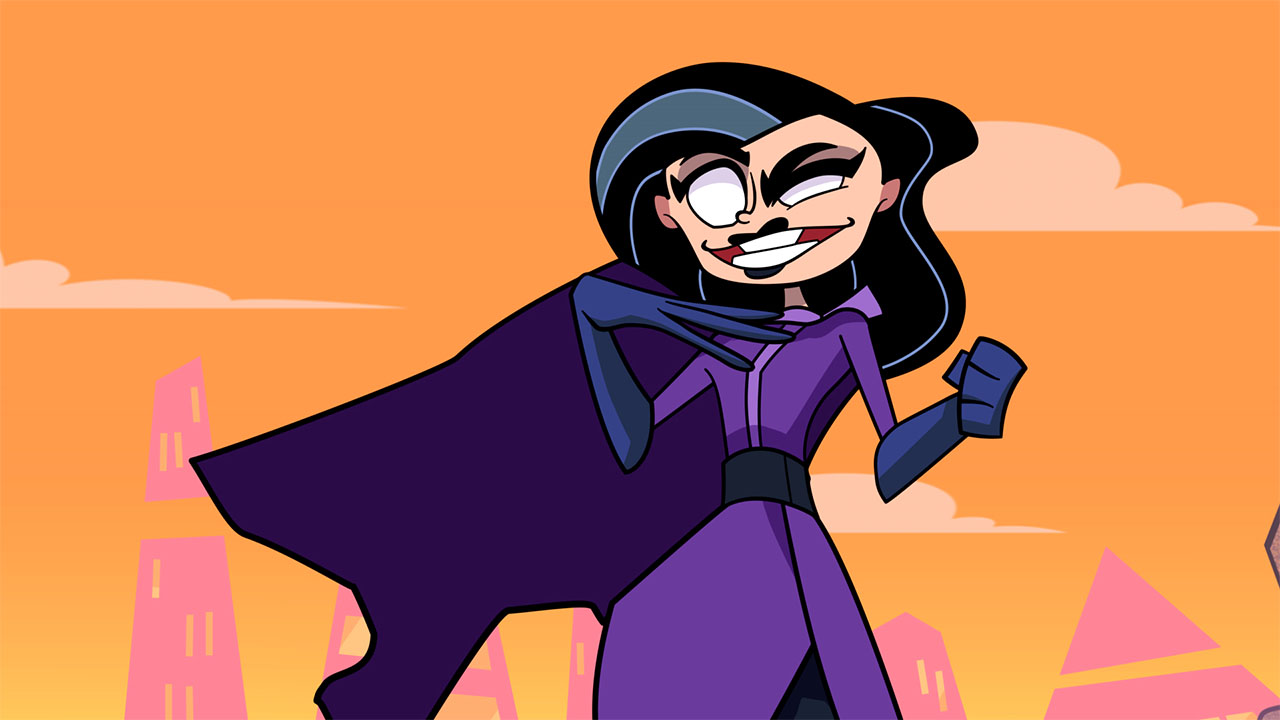 The Battletoads themselves received a design overhaul, which serves to set the characters apart more so than in the past. Pimple is a hulking beast now that is much larger than the other two, who both are much smaller in stature than in the past. Rash is the most classic of the characters with his green color and the sunglasses, while Zitz is now bluer than ever as a way to stand apart from Rash. The redesigns for the trio are fine as a way to give them more of a visual identity, but the redesign for the Dark Queen is a massive downgrade. In the originals, the Dark Queen was portrayed as a sexy and menacing villain for the guys to save the galaxy from. The characterization of the Dark Queen is fine here, since it is part of the plot that she is a prisoner, but the kidified design itself is a major letdown from what longtime fans of the series would expect her to be like in this game. In a way, it felt like she would have been more suited to be in an Earthworm Jim game in this form than Battletoads.

As mentioned prior, Battletoads was always known for its difficulty level to where the majority of those who have played the game likely never made it very far. This new version tries to be a lot more approachable by offering three difficulty settings, Tadpole, Toad, and Battletoad. These are based on enemy health, enemy strength, and the respawn time. Toad is the sort of normal game experience that most players will probably want to experience, with Battletoad being the extremely difficult one that will really test your skills. With timed respawns of the characters though, even the hardest option won’t quite be as difficult as the original.

Talking about Battletoads’ gameplay can get a little complex, though not because the gameplay itself is all that intricate. Battletoads features 25 stages for you to play across four acts, but where it gets complicated to explain is that there are 12 different types of levels in there to where there’s no one specific level setup to explain. While the original games did have some variants in gameplay here and there, the core gameplay across most of the levels was pretty standard. 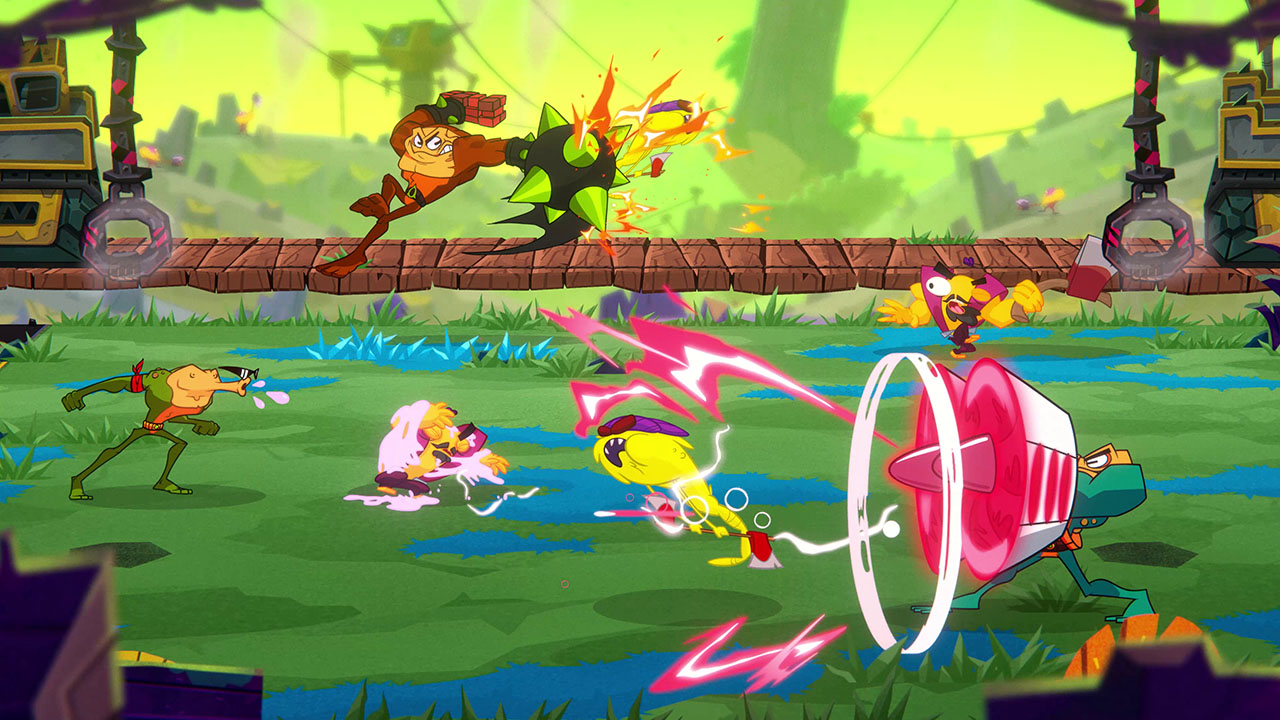 For that part in this reboot, the characters and game itself controls quite well. You get to choose between Rash, Zitz, and Pimple to use in battle, with the ability to switch between them at anytime during the level. Regardless of which of the three you select, the control scheme is going to be the same, though how they perform in battle will vary. Pressing X will do a basic attack, while you can launch enemies with Y and then mix in what are known as Morph Attacks with B. You’re essentially going to rotate between using the three of these throughout battle, while also pressing RT to evade enemy attacks. You can also use your tongue to pull enemies in closer to you, as well as to grab flies to restore health and collectibles as well.

Both Rash and Zitz play pretty similarly for the most part, though they do both have their own distinct attack moves from one another. The real difference comes in with Pimple though, who is a much slower brute type character that can deal damage at a much higher rate. If you happen to lose all your health as one of them, the game will instantly sub in one of the others. At this point, there is a countdown timer for when they can respawn, which you have to be careful with in the tougher moments. If you lose and the other two characters are still counting down, you will have to revert back to the last checkpoint.

While a little more out there with the combat styles than the original, the basic combat here felt quite right as a modern version for the characters. However, out of the 25 stages found in this game, only four are sidescrolling left to right beat ’em up stages. There are also four boss stages that utilize the same combat style, but two of these will take you less than two minutes a piece to finish and are really nothing to write home about themselves. 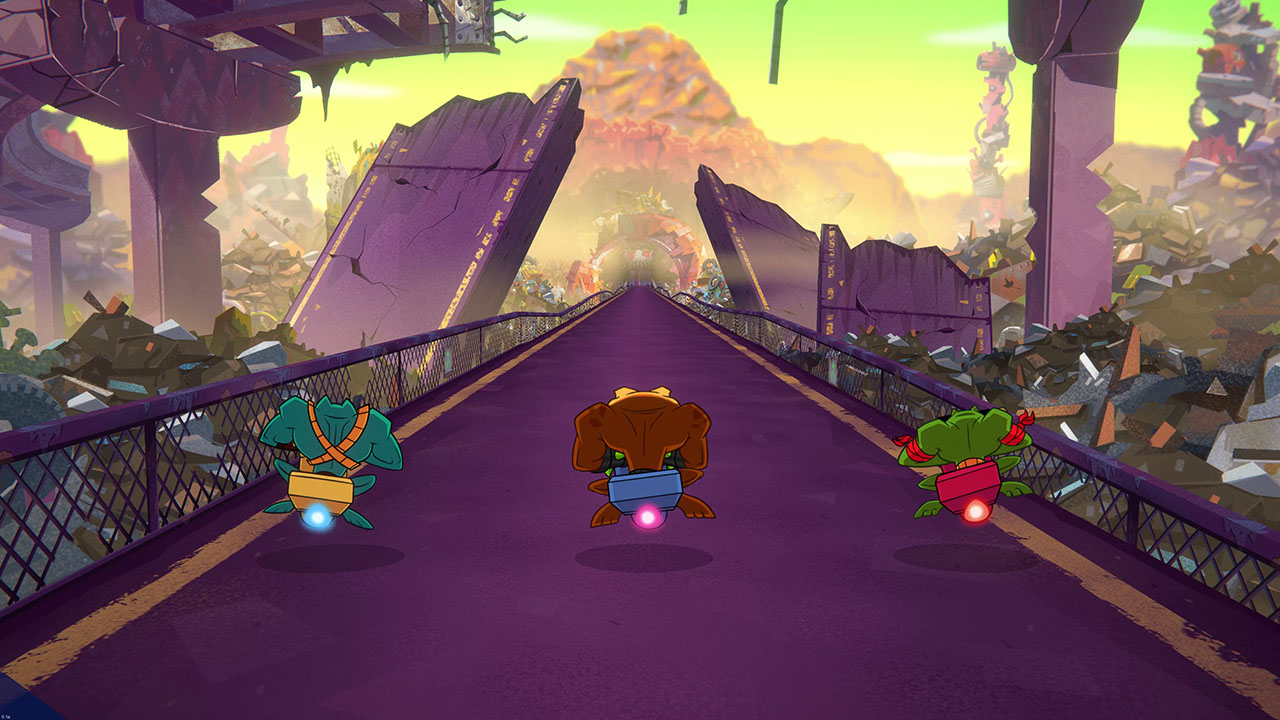 From there, you have a number of other level types found in the game that greatly vary in quality. The infamous turbo bikes are back again in two different stages, but this time they are from a third person perspective behind the bikes as you’re driving towards the screen. While not quite as difficult, these stages can still give players a great challenge and are a lot of fun to play, the same of which cannot be said for many of the other stage offerings.

A number of these stages will only take you a minute or less to complete each and are nothing more than glorified QTE segments where you have to quickly press buttons as fast as you can, or completely at random in the case of two stages. It felt like these were turned into their own stages rather than being included in existing ones just to pad out the stage number, which is very misleading when telling someone how many stages are actually in the game. This is made even worse by the fact you can easily complete the game in three and a half hours or less and that’s being very generous with allowing extra time for deaths along the way.

While the first two acts feature a mix of the stages to where it doesn’t seem so bad, Act III is where the game really falters. For some reason, they decided to introduce three space shooter levels akin to Geometry Wars meets Asteroids and three puzzle platforming stages with Pimple that were as simple as moving blocks to advance. The only real interesting stage was a control panel puzzle you have to continually solve to advance at the end. This entire act really bogged down the game as a whole by making a full stop change in the game style for way too long before getting to what was a very short Act IV after the fact. 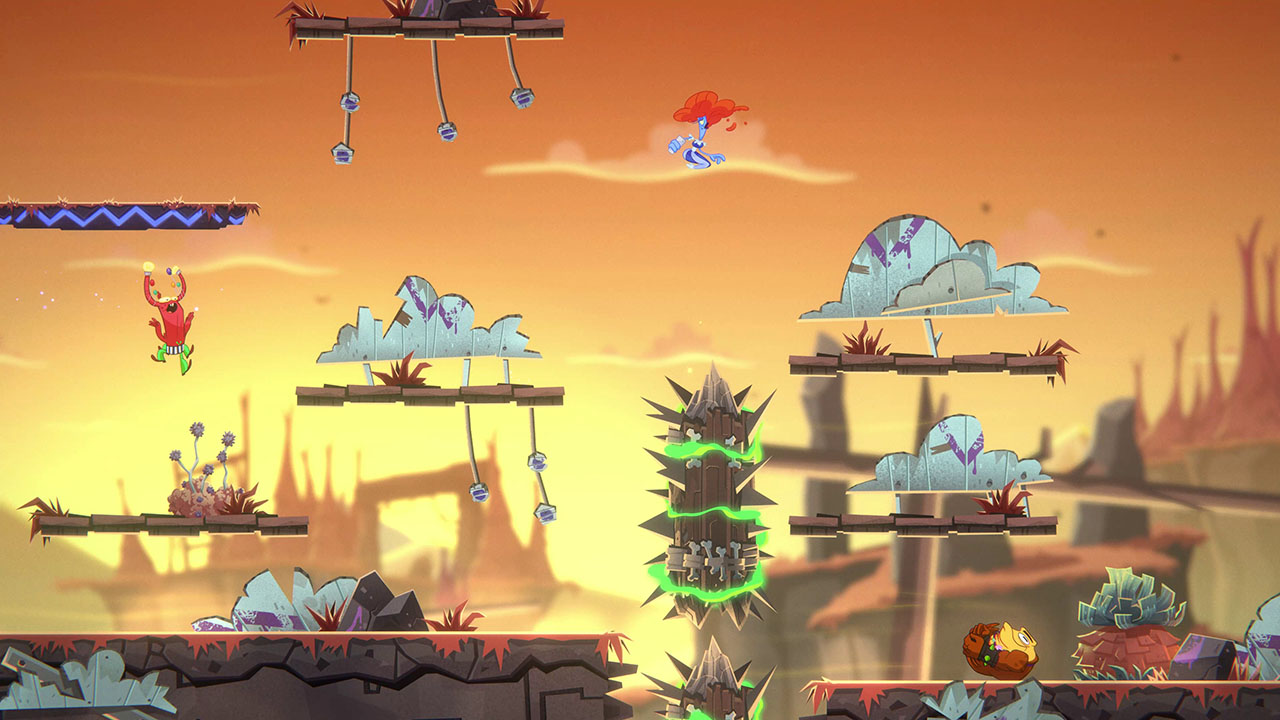 Battletoads was always infamous for not only its difficulty in single player, but its increased difficulty when playing with a friend. Having three characters to choose from makes it an obvious candidate for multiplayer, which is included in the game. These vary across the levels, such as letting you use new characters named Bratty and O.W.T.H. in the Pimple puzzle levels, with each one able to be controlled with a different controller. Being able to play the game with friends can help some to increase the enjoyment factor, but for some reason they made the baffling decision to not include online multiplayer at all. In today’s online gaming landscape, you absolutely cannot release a game like Battletoads that has three player co-op and not include online play in some form.

The original Battletoads games had a lot of variety in their level design, but the core gameplay remained the same throughout and had consistency outside of levels like the Turbo Tunnel. In comparison, the new Battletoads felt like a game that couldn’t make up its mind on what it wanted to be compared to something like the very enjoyable return of Streets of Rage earlier this year. Having so many different stage types, a majority of which are way too short, makse the game almost feel like a mini-game collection than the full scale Battletoads game that fans have been waiting for all these years.

While the art style and crude humor may be the most polarizing aspects on the surface, the lack of any consistency when it comes to gameplay and level design is the real disappointment in what was supposed to be the triumphant return of Battletoads.