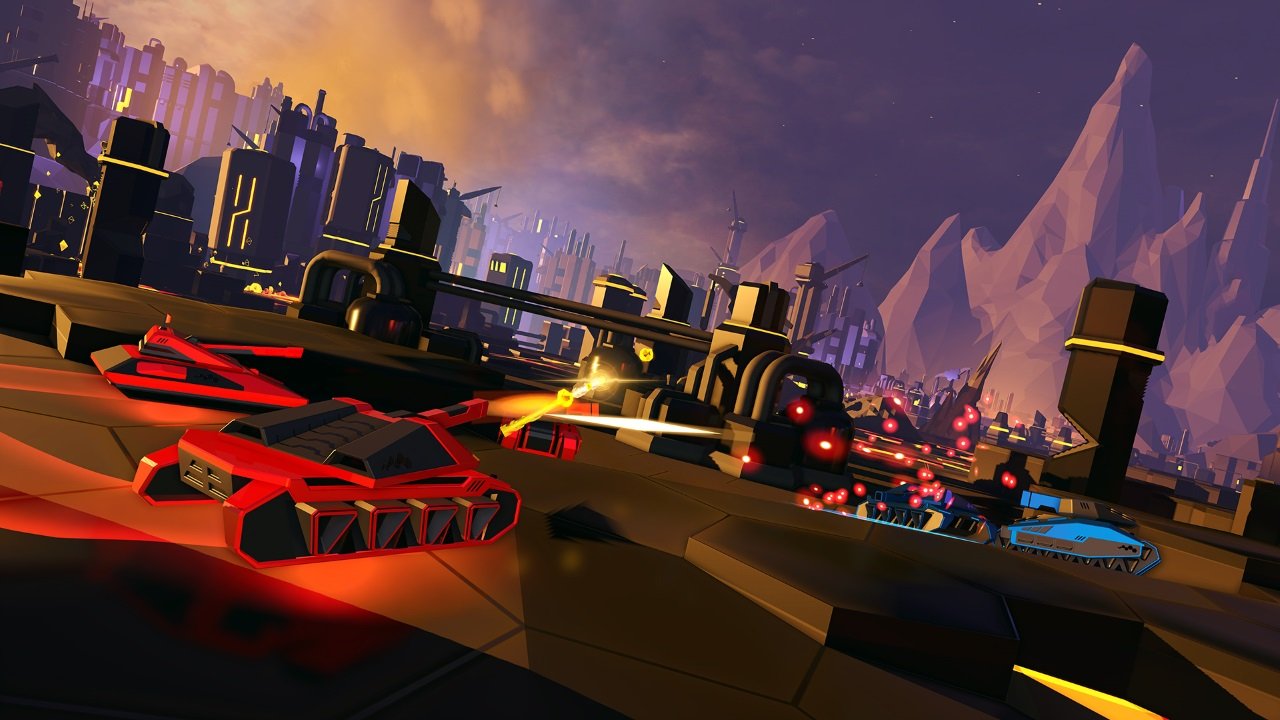 Battlezone may have been a revolutionary arcade title when it released in 1980, but it’s not really a household name, making the decision to remake it for the PlayStation VR a bit of a surprise. Still, it’s a title that is ripe for updating, bringing it into the modern gaming space, while also using it to push VR to interesting new places. It’s gameplay style also works well with the seated experience of the PSVR, allowing for immersion in a lot of interesting ways. However, the underlying gameplay experience of PSVR’s Battlezone doesn’t come together all that well, leading to an overall disappointing VR experience.

In Battlezone, players take control of various models of tanks, before setting out on missions across a singular map. Depending on what spot they choose on the map, the mission can vary between an all out assault, defending against enemy waves, or sometimes it’s a nice supply depot. Controlling your tank is simple, though you’ll be inundated with info right off the bat. There’s a tutorial mission, but it’s actually pretty easy to miss, so figuring out how your radar works, or what button does what can be a chore. This is compounded by the difficulty of the game itself, more on that later though. 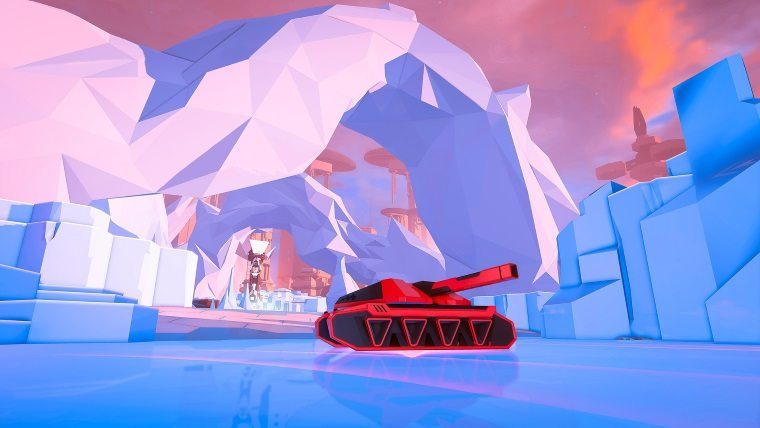 Battlezone has a lot of layers to it, but at its core it is a simple game. Players can go alone or team up with three others via online co-op. They then take on an unnamed foe, traversing a randomly generated map in distinct level segments, with the ultimate goal of reaching a volcano and ending the enemy threat once and for all. Each step along the path delivers either a new mission, or some type of random reward. Players have little direction as to where to go, or what will benefit them the most, with just a few prompts about different things that might help them in the final battle.

That progress will indeed be hard fought, because Battlezone is a definite challenge

Adopting a lot of mechanics from roguelike games, Battlezone features permadeath along with the randomly generated map. Rewards and upgrades can be discovered or purchased, but these are all temporary. Players share a pool of lives, with the option to buy more along the way. If they run out, then it is Game Over, and aside from a few permanent unlocks, everything resets to zero. This isn’t too bad on the shorter runs, but larger maps can take quite the investment. Of course, this increased risk also has its corresponding reward in that most players will play seriously, not wanting to lose all their hard fought progress.

And that progress will indeed be hard fought, because Battlezone is a definite challenge. Your tank can be destroyed by just a few errant shots, even with semi-upgraded shields. Your weapons aren’t really all that effective, have little ammo to start with, and take a while to reload. Of course, all of this can be upgraded by collecting currency, called data, during your missions. However, everything is pretty expensive, and key upgrades begin costing quite a bit after the first couple. Having to upgrade each side of your shield is especially egregious, making players choose between some very key upgrades. 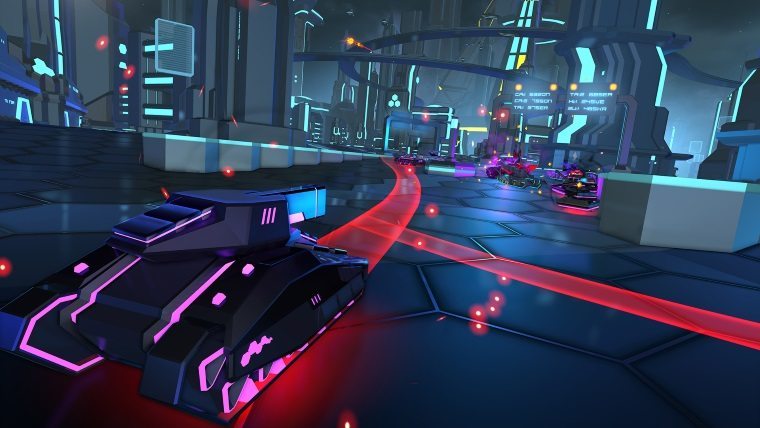 This wouldn’t be as big of a deal if the game rewarded you for doing more exploration of the map. Queuing up a new mission should feel like a treat, as you can earn valuable resources. However, the missions are so tough, with the consequences of failure being so high, that most gamers will usually make a hard bee-line for the end goal, perhaps only detouring if they use probes and find something nice along the way.

All of this is to say that Battlezone is a hard game. Some players may enjoy this, and it does have its advantages. However, its difficulty largely comes from its unfair practices and bad design, rather than an actual challenge that is put before the player, with a clear, but difficult path to victory. It also has unintended consequences, with the lack of map exploration just being the best example. And it is made all the worse by Battlezone’s propensity to not explain itself to the player. In many online games I found other players horribly lost as to what to do, and how things worked. The answers were hidden away in the nicely designed, but overly complicated HUD, or just outright not mentioned to new players.

Adding to this is the sluggish gameplay that is presented here. You’re in a tank, so being slow is kind of to be expected, but while movement is acceptable, everything else that’s slow about Battlezone makes for a duller experience. Firing shots from your tank is almost excruciating at times, and when you exhaust the small ammo supply, your reload will make you just want to switch weapons and never look back. Of course, this also queues up a long sequence of weapon changing, and if you have multiple armaments available, this can become a major headache. 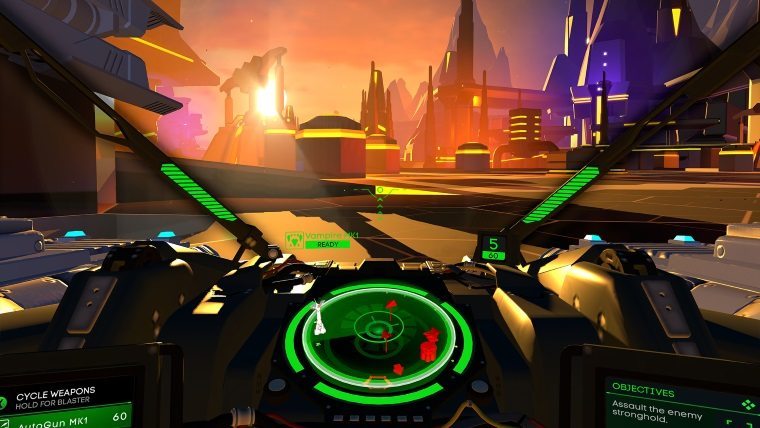 If you can handle the too-tough challenge and slower pace though, Battlezone has some good merits to it. It runs exceptionally well on the PSVR, with sleek graphics that truly put you into a Tron-like simulation feel. Fighting enemies can often feel like a chore, but when you make that perfect shot, or stop the enemy forces with one second left on the timer it does feel great. And the game does a fantastic job of immersing players in its world, putting them right into the driver’s seat of a massive tank, and leaving them to explore as they see fit.

With endless replayability, Battlezone offers one of the more robust PSVR experiences available at launch. It is also exceedingly immersive, and its online co-op multiplayer makes for a unique experience in the VR gaming space. It’s too bad that a lot of the underlying gameplay design decisions weren’t better implemented. The extreme challenge is just one thing, and could be fixed in a future update for that matter. But players simply won’t find themselves that drawn back into the game after the first couple of rounds, mostly due to frustration, or an overall sluggish feel.