The Binding of Isaac: Afterbirth Review The Binding of Isaac: Rebirth’s DLC expansion, Afterbirth, is perhaps the most highly anticipated indie release of the year, and that’s compared to such greats as Broforce, Ori and the Blind Forest and Hotline Miami 2: Wrong Number.

It’s safe to say that there are many stalwart The Binding of Isaac fans.  That excitement re-kindled, particularly because of its re-release, Rebirth, and all of the malevolent and splendidly disturbing goodies it has to offer. Its absurd replayability, pixelated (if gruesome) charm, solid gameplay and memorable soundtrack are but a few of the gems you can expect to experience. And now, thanks to Afterbirth, there’s a whole lot more to look forward to. 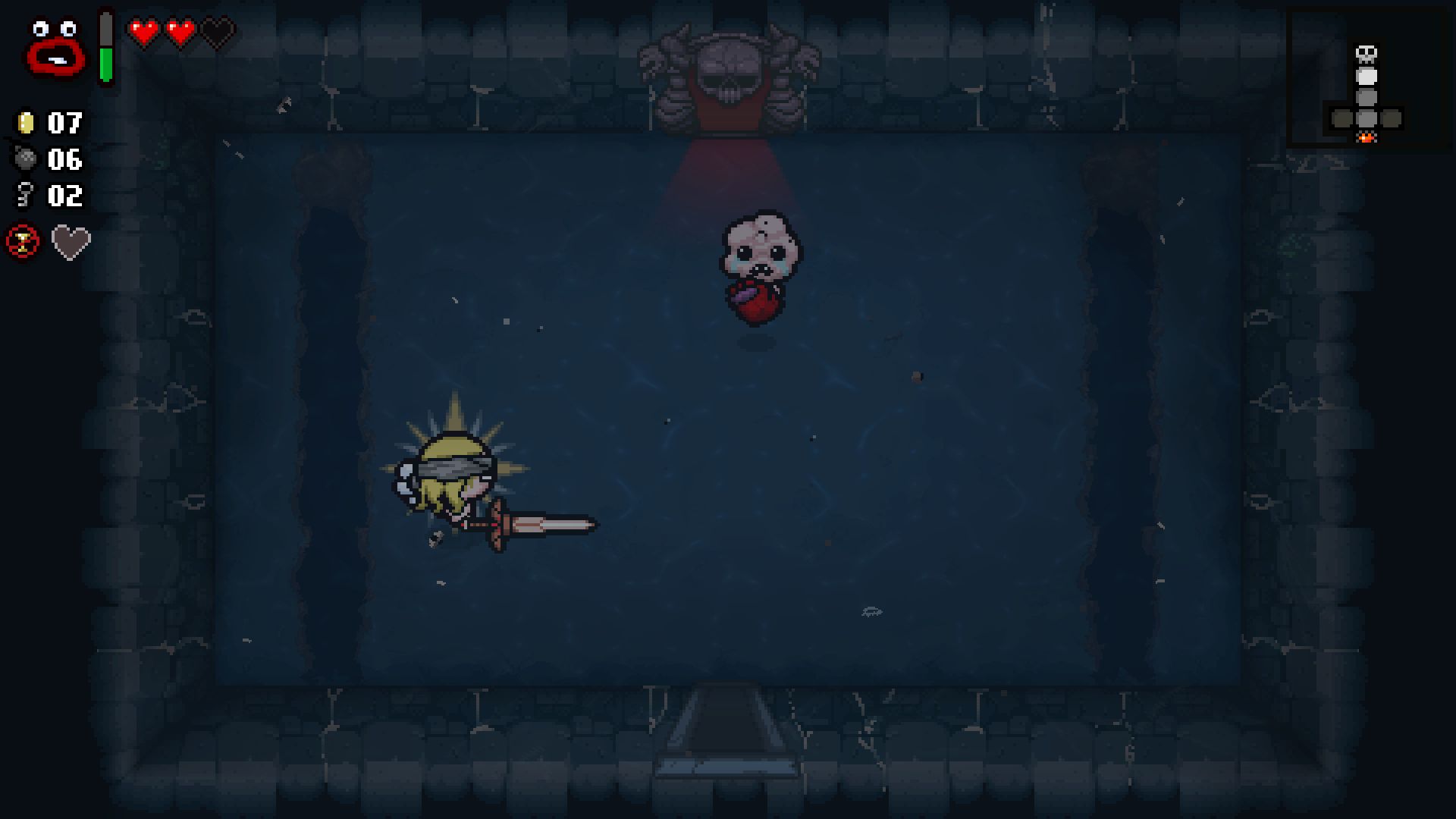 For fans of the game, of course, any excuse to dive back under Isaac’s house – a foray into the tastefully obscene, joyfully twisted and delectably repulsive world Edmund McMillen cooked up one questionable summer’s eve – is good enough as is. All that was needed is more things to do and see. And given Edmund and the rest of the development team’s determination to get the expansion right, through feedback as well as Reddit and Twitch discussions with the game’s fans, it’s hard to see how it could go wrong.

For everyone else, should you require a little more motivation than “just trust us”, Afterbirth sports the all new arena-styled Greed Mode; a new character, the mother of demons Lilith; daily runs; thousands of new playthrough variations, courtesy of hundred of new items, new rooms, enemies, bosses and champions of each; and a whole lot more besides, culminating in at least a hundred hours of additional gameplay time. 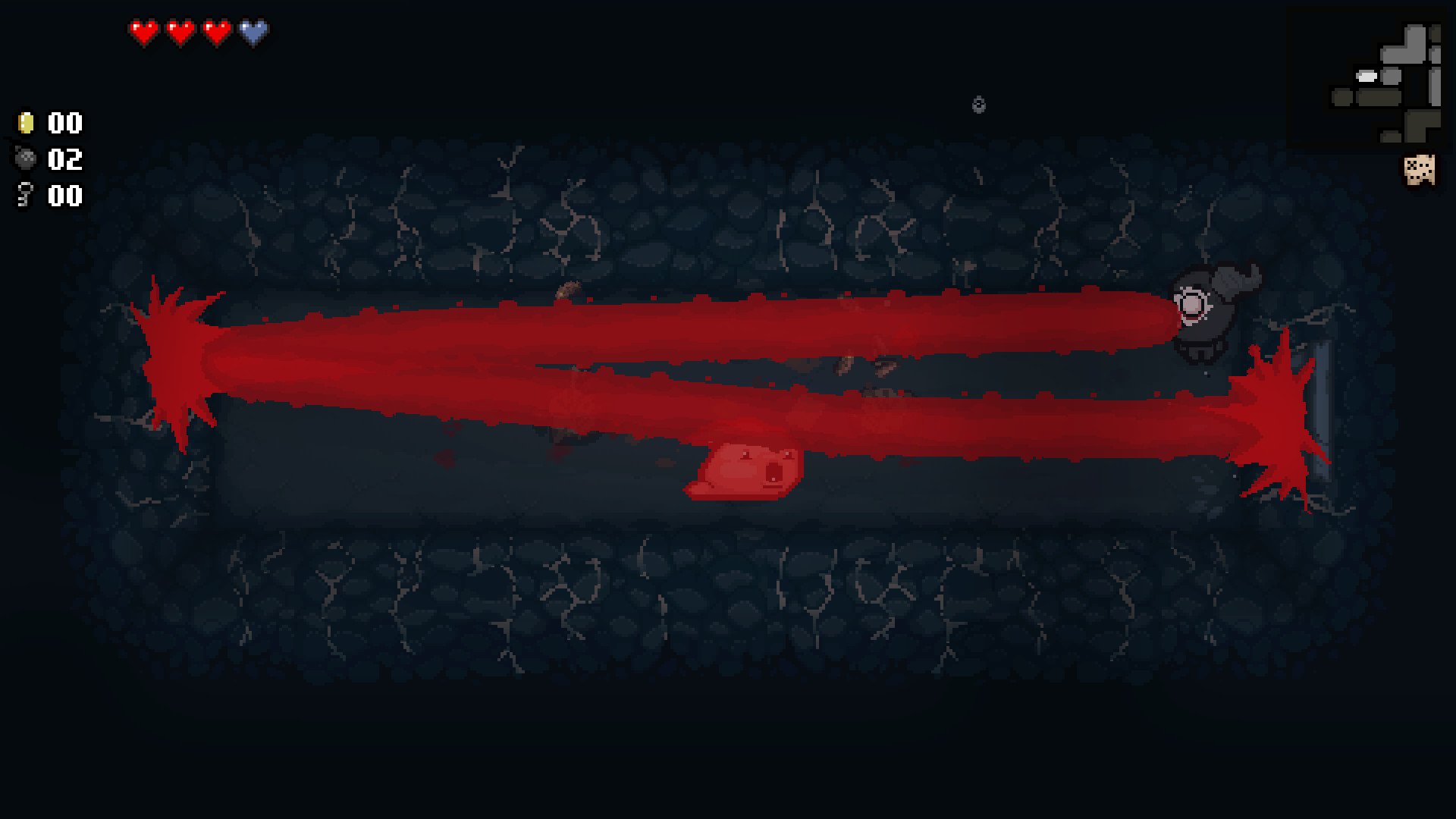 Talking about additions, rogue-lites, or roguelike-likes if you prefer, benefit greatly from additions, usually in the form of new things to do, see, play with and hear. New “things” add more reasons to replay the game: new items, for example, mean having to unlock them, trying them out, eventually perfecting them and, in a game like The Binding of Isaac, ultimately exploiting them for the best possible playthrough.

Rather than adding different color palettes to already existing items and labeling them “new”, the team considered new ways to approach old situations as well as new situations altogether and considered how new items might best come in handy, or even hinder your progress.

Take the item ‘Holy Light’. While items that make use of holy beams of light are great on paper, they’re fairly unappreciated in The Binding of Isaac because they rarely hit their target, and don’t do enough damage to warrant the effort. The newly introduced ‘Holy Light’, on the other hand, has a beam of light strike anything unlucky enough to be hit by randomly chosen holy tears. Because you’re unsure of exactly which tears will cause the effect, even if they’re clearly indicated once in flight, it pays to be more accurate with your tears and have each one hit.

Or how about an item that doubles any companions you have with you. What that does, should you find the item in a playthough (though Lilith does start with it), is make companions that much more useful. It offers another approach to the game, as opposed to wholly searching for items that do the most damage.

And that’s just a few of the additions you can expect. There are so many new, interesting and enjoyable possibilities thanks Afterbirth; hopefully meriting the hundred hours of playtime. 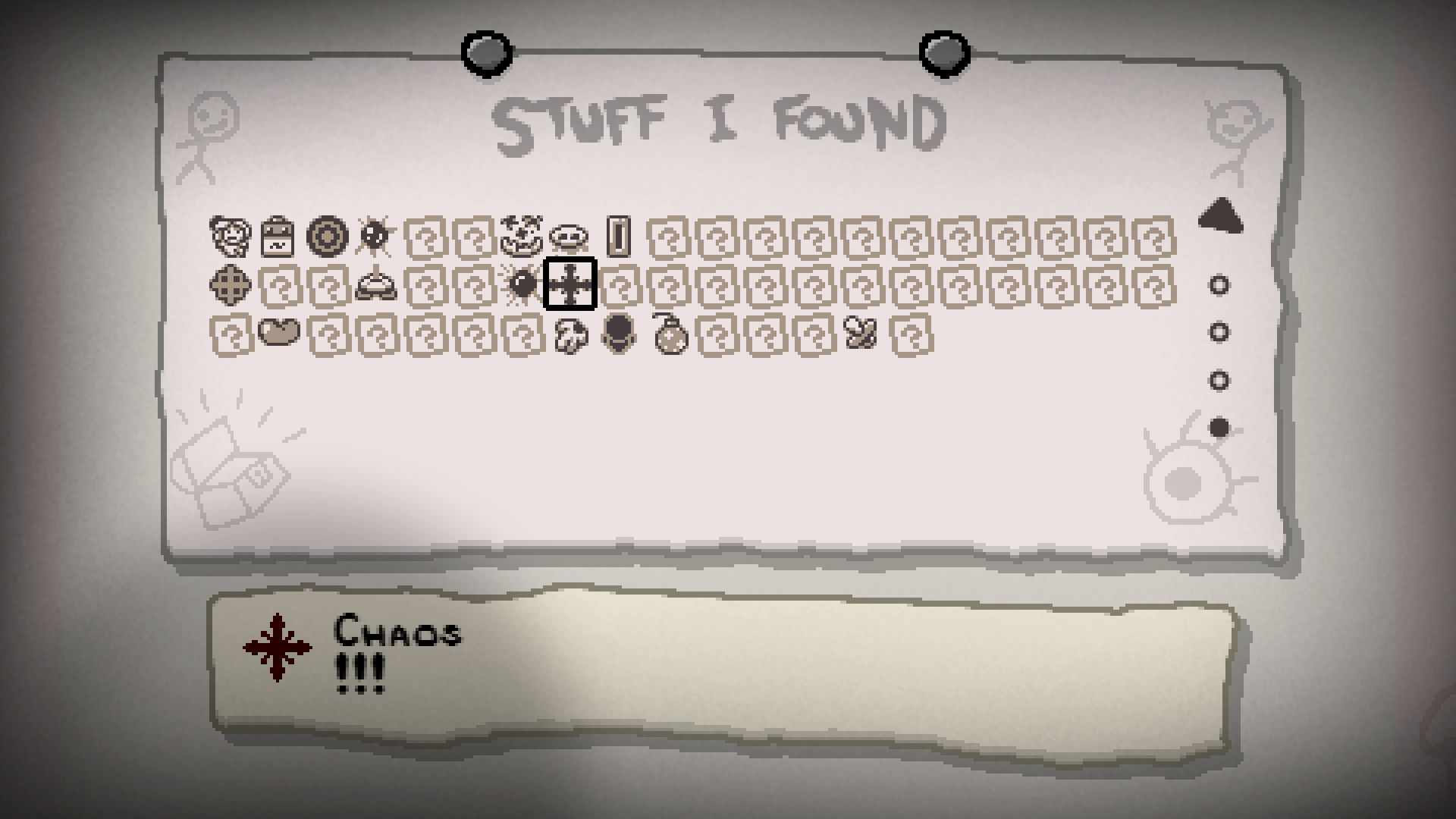 One of the biggest additions has to be the all-new Greed Mode which is essentially an arena-styled mode that throws waves of enemies at you each time the counter hits zero, though it’s up to you when the counter starts. You’re given gold at the beginning of each wave, but keep in mind that waves will continue to spawn regardless of whether you’ve finished off prior enemies, resulting in an accumulation of enemies to deal with. You can, however, pause wave spawns by walking over the same button that begun the chaos, though it will cost you a little life to do so.

In between levels, each resulting in increasingly difficult sets of waves, you’re given access to a shop that can have its items reshuffled for a small price, and you’re given access to a cursed room as well as two item rooms on every level, minus the last. You can even guarantee yourself a deal with the devil should you defeat both boss waves on a specific level and activate the spawn button one final time.

It’s all about risk. Is the final wave worth the risk of a deal with the devil or angel room item? Should you spend your money on items available or spend some coin reshuffling for better items? There’s a lot to consider and make use of, and as a result Greed Mode is a nice addition to the game. 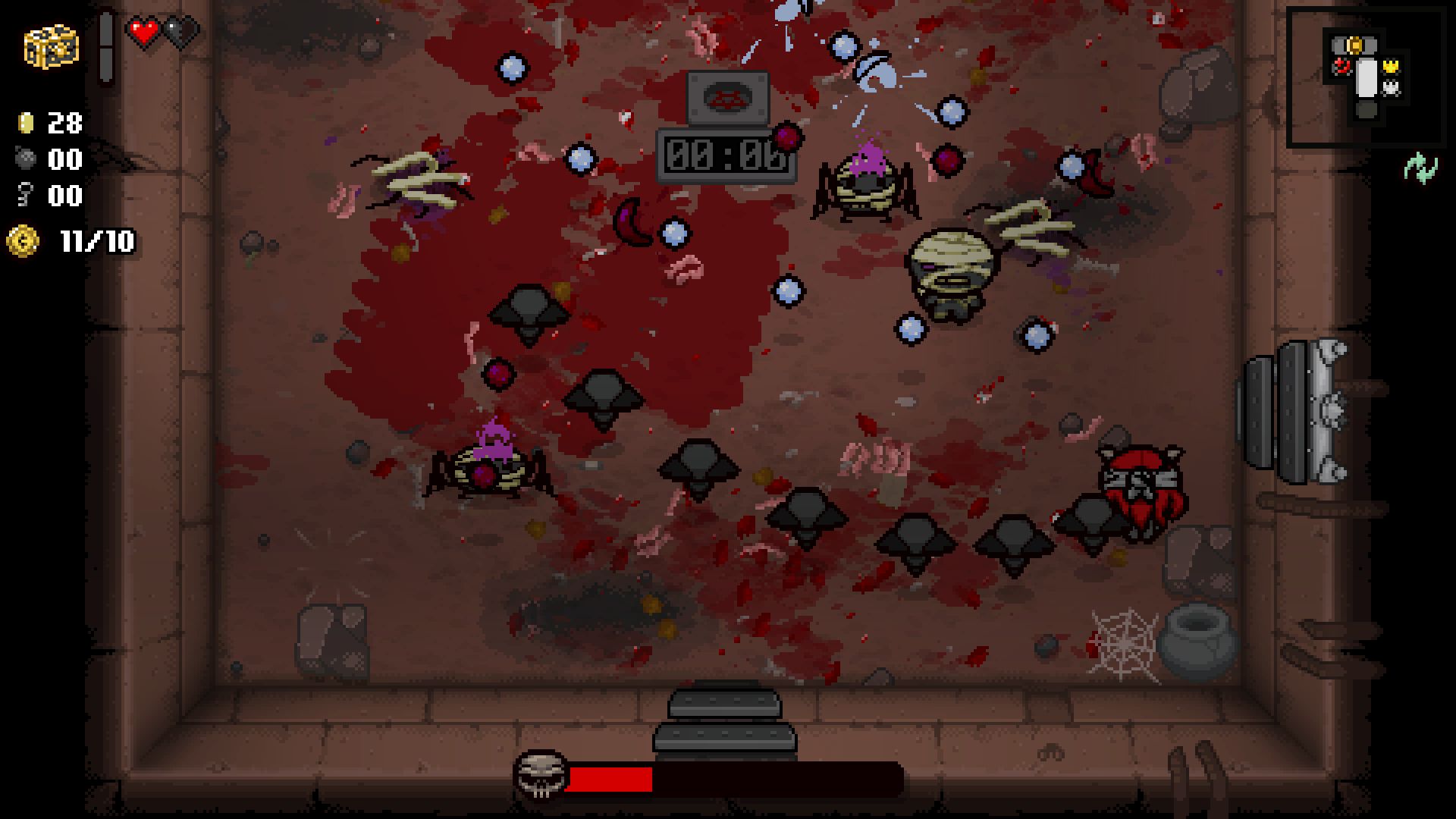 That of course only works if the underlying game is enjoyable enough to reward replays, and Afterbirth has done its part to make Rebirth that much more replayable. Perhaps the best demonstration of that are items that originally didn’t mix in Rebirth. They now do, granting new and whacky means of dispatching those unfortunate enough to encounter this wandering, naked baby in Afterbirth – thanks to the updated item combo system.

So expect 20/20 Brimstone to obliterate adversaries with an unencumbered rapid-fire dual Brimstone attack. Or how about Midas Touch, E. coli and Unicorn Stump creating a nearly invincible Isaac who turns everything he touches into golden poop. Enemy AI has also been polished somewhat; items have been rebalanced to make some of the more irrelevant items, well, relevant in the face of a growing armoury of gross or disturbing weaponry; and there are all sorts of small quality of life and visual updates that make the experience that much better.

Perhaps most noticeable of the bunch is the introduction of a narrator who announces your pill and card effects, but there’s a lot more where that came from. For instance, the new bosses, who sport any number of new particle effects, animations and more. 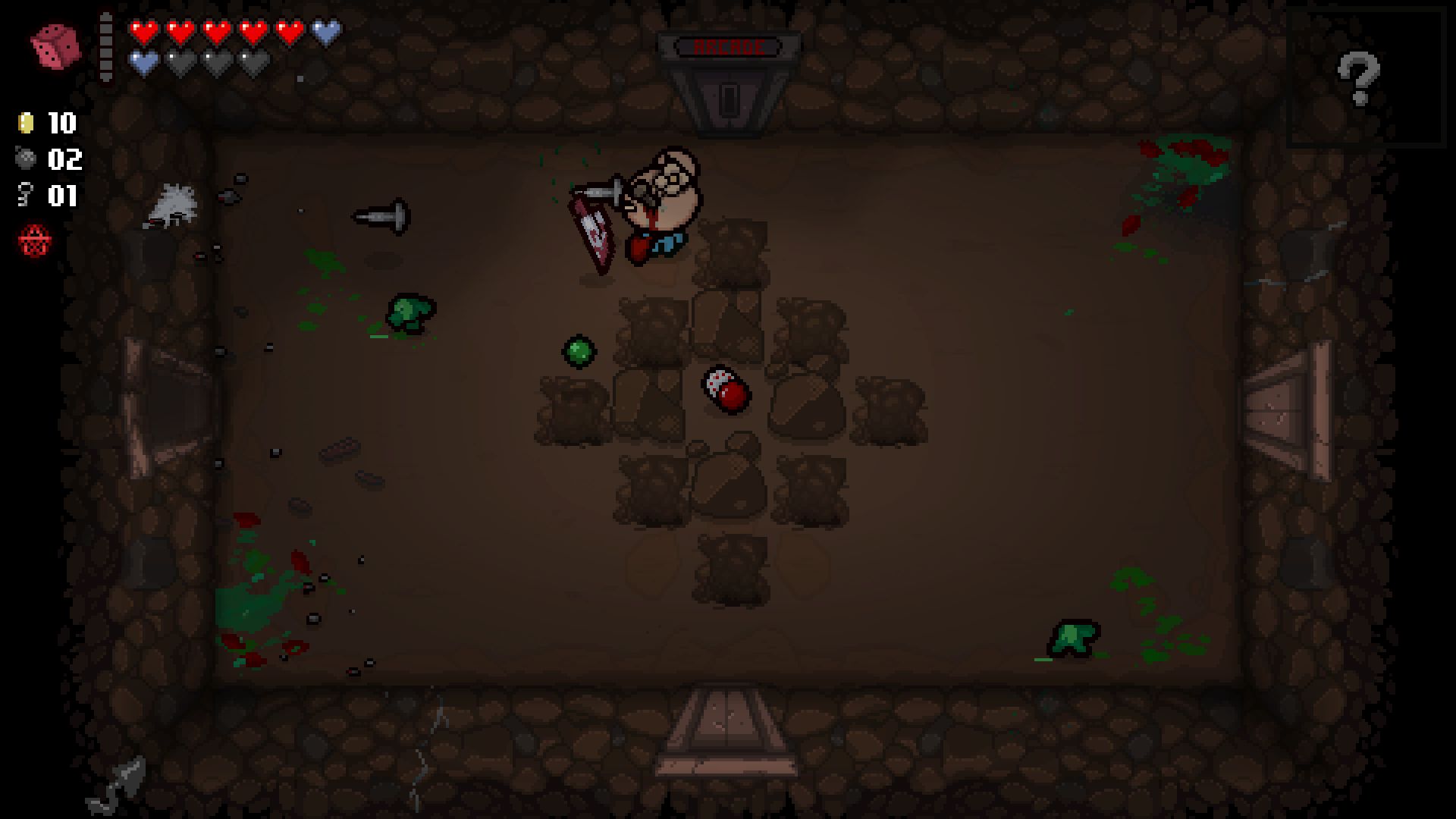 There’s a lot to love about The Binding of Isaac: Afterbirth.  It’s a great expansion to a great base game. If you enjoyed Rebirth, you’ll love Afterbirth.  With the potential to suck you in for hundreds of hours, Rebirth slowly transitioned into the perfect game to kill 20 minutes, but Afterbirth has made it indubitably consuming once again.  It’s difficult to ever imagine playing the original The Binding of Issac without all of the absurdity introduced with this latest bit of pixelated goodness.

The Binding of Issac: Afterbirth