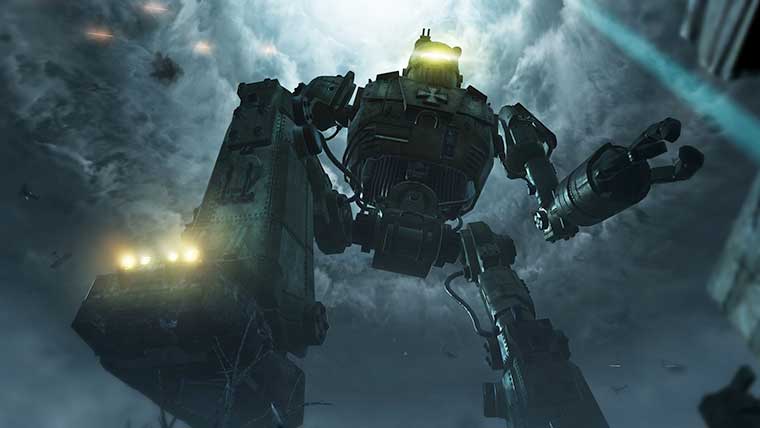 So far, Black Ops II‘s DLC offerings have left me rather stumped. They’ve all been confused mish-mashes of design and visuals that either fall flat on their face or deliver satisfyingly. All have been less ambitious, creative and inspiring than those of previous games, but some can still be a blast. Apocalypse, rounding off Black Ops II’s season of DLC, suffers from the same issues as in the previous packs, delivering an almost 50-50 split of rewarding design and murky drabness.

The first of the two new offerings, Frost, is based in a building-strewn wintry town, reminiscent to me of the forgotten BO1 DLC offering Stockpile. The main selling point here is the frozen river that slices the map into two pieces. It’s rightly the area that accumulates the most traffic, however the rest of the map is so drab and uninspired (lacking in any form of engrossing design gimmick) it largely ends up as a ghost town, making for boring treks to find foes and a slower pace of play, despite the map being small in size.

The second brand new addition, Pod, had me hyped the most but has fallen miles short of its initial promise, and is by far the worst of the maps found within Apocalypse. The trailer promised leaping and bounding from ‘pod’ (octagonal 1-story buildings) to pod at great heights, with inter-pod gunfights taking place while the ground played host to separate battles. Unfortunately, it is not so – only pods on ground level are accessible, adding no originality to its design and making it a complete mossy crumble-fest lacking any spark or imagination. One of the worst CoD maps I’ve ever had the misfortune to play. 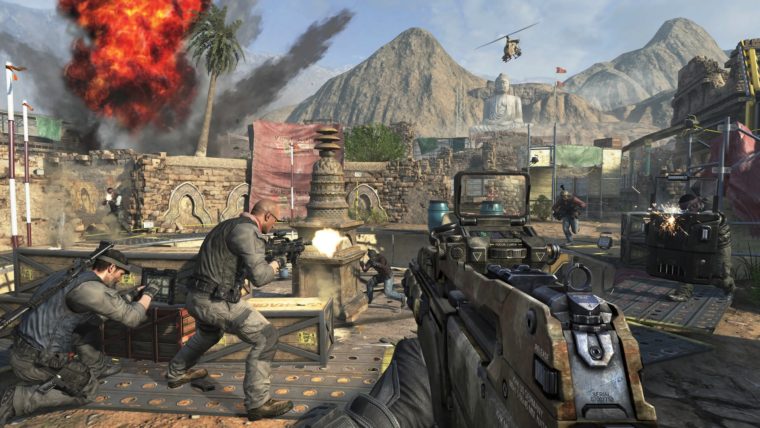 The first re-skin on offer, Dig (inspired by WaW‘s Courtyard), is a map of split personalities: The outer rim of the map is a close-quarters SMG-fest with crumbled walls creating cover of a variety of heights. The centre consists of circular ditches accessible by stairways, and the walls scurry off, clearing the way for longer lines of sight. Dig is a pleasant surprise, with a design that rewards tactical and thoughtful play. One gripe would be that the aforementioned walls have tendency for abuse by the camping kind within the CoD community, although this depends on the lobby you find yourself in.

Of the four maps on offer, the re-skin of the original Black Ops‘ Stadium, Takeoff, is the sole highlight of the entire pack. It is by far the best-looking offering – the ground is lit up by strips of orange, grey and even pink, whilst indoor areas play host to the game’s ever-present signature futuristic blue lighting, creating eye-catching hues. In terms of design, Takeoff also takes the crown, refreshingly balancing claustrophobic corridors and rooms with medium-range assault rifle-suited battlegrounds. Intelligent snipers can also cipher sneaky long-range sightlines, too.

So overall then, the multiplayer maps on offer here are once again the definition of a mixed bag, with some delivering satisfying, intense yet thought-out combat experiences, and others delivering nothing more than a random scattering of buildings and other miscellaneous objects. Apocalypse summarises my view of Black Ops II‘s maps being largely a disappointment, with diamonds accessible in the rough.

Now, after the slight disappointment of the multiplayer maps, I was hoping that the brand new zombies experience, Origins, would deliver. Put simply, it did – not only that, it left my zombie jaw wide open. I selected Origins expecting, going by the trailers, a map that was huge in scale. Yes, I got that, but it is also one that challenges the zombie formula players expected to be concrete in the ground. 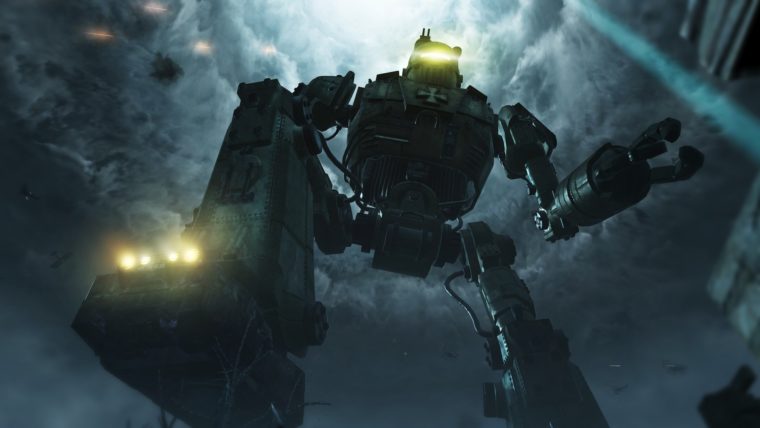 The first thing you’ll learn is that there is a new starting weapon – the Mauser. Although this adds a slightly different feel to the first few rounds, its damage is nigh-on identical to the starter found in previous offerings, so you’ll still find yourself going about the same routine. Bear with me – it’s when you step outside and discover the blizzard-stricken narrow trenches that things become interesting. My first interesting discovery was that the mystery (random weapon) box now requires the power. So I braved the blizzard, stepped outside and found a power generator. Convenient, almost too convenient – until I flipped the switch to discover that that generator only powers my immediate surroundings. Yep – there are now power switches for individual areas of the map, rather than one, overarching one. This, while not reinventing the formula, forces you into a different mindset. A new perk drop – ‘Zombie Blood’ – has also been introduced, and it’s a useful one – it soaks you in zombie blood, doing away with your foreign scent and causing the zombies to turn away, leaving you alone. It’s actually just amusing to watch.

The final new element I’m going to talk about here is arguably the most exciting addition – an altitudinous metal mech stomping and squashing its way back and forth the map. Not only does this add tremors and vibrations to the map as he trundles past, but shooting his foot whilst he lifts it to great heights will open a hatch launching you, quite literally, inside his head. We won’t say much more, but…it’s vital for the Easter egg.

Origins is the sole reason to purchase Apocalypse. It just oozes creativity, from the meaningful tweaks to the zombies formula to the more bizarre additions (giant mech robot, anyone?), and overall, Apocalypse is a sign that zombies is where Treyarch’s strength lies, with multiplayer maps, truthfully, being better left to Inifinity Ward.