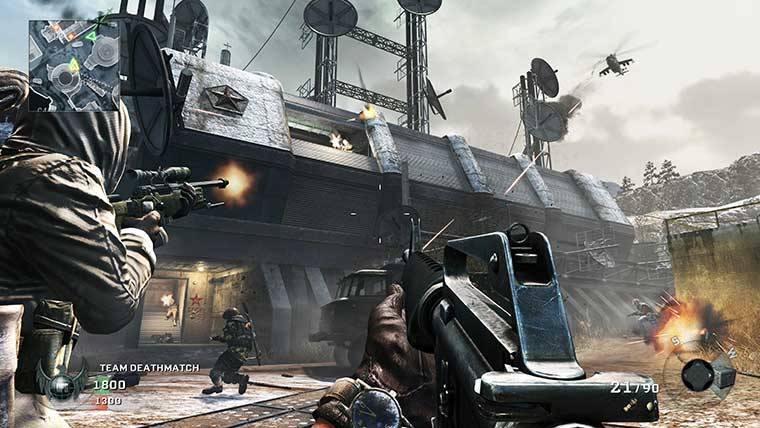 The Call of Duty: Black Ops Annihilation Map Pack contains five all new maps for the multiplayer portion of the game.  These include “Silo, Hazard, Drive-In, and Hangar 18, as well as another spin-off into the land of zombie infestation in the jungles of Shangri-La.  Available exclusively on the Xbox 360 for a limited time, the Call of Duty: Black Ops Annihilation Map Pack releases on June 28th.  As usual, the downloadable expansion plays to the hardcore Call of Duty fan more so than the part-time player.  Fans of the Zombies mode will be making an about face in Shangri-La where players will once again be tasked with navigating the mode with the familiar cast of survivors: Dempsey, Richtofen, Takeo, and Nikolai.

Treyarch isn’t quite out of ideas for the Zombies mode – In Shangri-La you’ll immediately notice a departure from the dreary tone that has been set in the previous iterations.  It’s a jungle after all, complete with scenic views, waterfalls, and of course flesh eating undead waiting to round you up and eat you.  There are plenty of new zombie models as well.  There are female zombies, napalm zombies, and zombie monkeys that pester you constantly.  While I didn’t quite get to unlock all of the secrets that Shangri-La had to offer before being able to sign off on the content, it feels just as, if not more robust than all of the previous zombies content.

The mode is just addictive fun.  Rounding up a posse of zombie slayers and shooting for top marks can have you playing just this one portion of the map pack for hours if not days.  Especially if you are into finding the secrets of the map.  This is where the true Zombies fans really pull together to get through what many only scratch the surface of.  As I said earlier, I’m not entirely sure what’s been found in the jungles of Shangri-La just yet, but I’m sure it’s something interesting as usual.

If you’re still banging out Call of Duty matches on the regular – Then of course, you can’t really go wrong with Annihilation.  There are four new maps that will increase your multiplayer total to a ridiculous 26 maps in total.  The developers didn’t phone it in on these new ones either.  They are very well designed, each with a unique tone to the art.  There’s bit of something for everyone, and maybe a little extra if you’re a sniper.  It seems that each map has set aside at least one nice line of sight from an elevated vantage point  to pick off players running through what turn into congested areas very quickly.

Drive-In  – The Galactic Drive-In really is the centerpiece of the multiplayer component of this new map pack.  The map looks incredible and its probably one of the best looking maps in the game hands down.  That’s all for naught if the level design isn’t on target, which fortunately it is.  The map plays extremely well with a nice balance of long sight lines and CQC.  Nice plots for the objective modes make for some interesting shootouts and intense battles, and of course there’s plenty of nooks and crannies for when the game settles into a Team Deathmatch camp fest as well.

Hazard – Another one of the outstanding maps of the pack is Hazard.  A golf course that is pretty much a snipers paradise, has nothing but open fairways and long tunnels to catch people trying to make a run for it.  If you’re a sniper you’ll instantly fall in love with Hazard, but even eagle eye AR players will have a field day with the open feeling of the map.  If you played World at War you’ll be very familiar with Hazard.  It’s definitely gotten some of its inspiration from Cliff side with the nice long sight lines along the top middle and back-side of the map.

Hangar 18 & Silo – These two multiplayer maps which are also included in the four, are more of a traditional approach as to what you’ve already become accustomed to in Black Ops.  They both carry a much more neutral color palette and are a little less easy on the eyes than the above two, but they both also play exceptionally well thus far.  Especially Silo.  The objective based modes are alot of fun with almost perfect objective spawning to trigger some really chaotic battles.

You can’t tease us like that – With all of the upgraded visuals of the new map pack, I’m not sure why the developer didn’t continue down the path of having some level of interaction on the maps.  There are small pieces of interactivity but nothing like the zip-lines of Kowloon or the Turrets of Berlin Wall.  These were nice touches to the other map packs and there’s nothing as substantial in Annihilation.  It was something that I personally hoped would continue in their level design philosophy, and was a bit disappointed about.

Map Pack Playlist – 2 years later and six map packs to the wind, I still don’t understand why all modes aren’t available to play when the map pack releases.  Is it just that I tend to play a playlist that is unpopular?  Is it too much to ask to get a hardcore playlist when the map pack releases?  Just once.  Please.  It’s not a deal breaker for me personally as I like the variation and getting to play some modes that I otherwise never would.  But I would really appreciate the option.

As the map pack propagates and more people pick up the content, the maps eventually move into the traditional playlists, but until then you’re stuck playing games that you might not want to play.  On the bright side you get a chance to play some of the gamemodes that you don’t play that often, but if you are extremely set in your ways, shifting to these forced modes will have you needing to completely rearrange your loadouts to remain competitive with other players.

Honestly, I never get how people can think that the Call of Duty map packs aren’t a great value.  Sure, if the developers were just wheeling crap out there everytime and trying to get top dollar for it, yes that would be a bad thing.  But when you’re getting the kind of content that’s extending gameplay for what likely ends up in many cases to be measured in days rather that hours, it’s really hard to argue against it.  I mean once again, if you’re not a fan of Call of Duty, you likely won’t be buying the pack anyway.  If you are, you’ve already waited too long.  It’s been out almost twenty four hours, now hop to it.