The latest news in the world of video games at Attack of the Fanboy
November 23rd, 2015 by William Schwartz 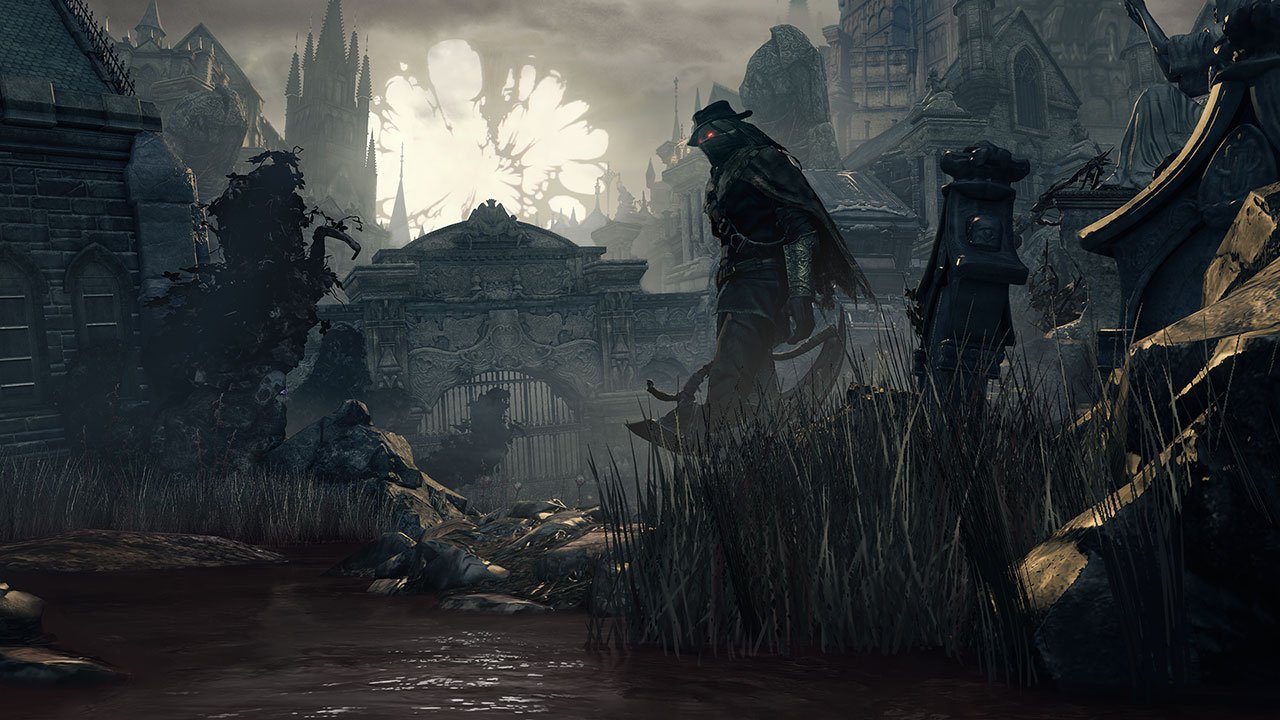 From Software’s Bloodborne is one of the highest rated exclusives to arrive on the PlayStation 4 since launch. While it might not have the “Souls” name in the title, the gameplay, art design, and distinct challenges that the game presents are undoubtedly cut from the same cloth. The one and only expansion planned for the game is The Old Hunters, and now seven months after release, Bloodborne players have a reason to return to Yharnam… or at least some version of it.

The Old Hunters is just about what you would expect from a piece of downloadable content for the game. Using the Souls expansions as yard sticks, The Old Hunters is a robust piece of content that can offer many, many hours of new gameplay experiences for the player. New weapons, items, enemies, boss battles, NPC characters, and factions are all scattered a across a massive new map to explore, with all the nooks and crannies, secrets to uncover, and shortcuts to create that you’ve come to expect from the game.

At this point, if you’re getting The Old Hunters, you’ve probably made your way through the base game at least once.  If you have, you’ll be prepared for the challenges of this new expansion and you’ll kind of know what to expect.  Progressing through any new areas in these “Souls” games is always an interesting and challenging proposition.  The labyrinth like map is a new challenge to explore, you’ll need to learn new enemies, their attack patterns, where they are located, the shortcuts, secrets, and power-ups that’ll help you progress. The Old Hunters dumps players in a semi-familiar locale so that helps some.  You’ll need to meet minimum requirements of having beaten the Vicar Emilia boss to enter what is called the “Hunter’s Nightmare.”

Once in the Hunter’s Nightmare, you’ll notice that this is a familiar area that is designed after spots in Bloodborne’s original Cathedral Ward.  While it’s not just a reskin, it’s very familiar to what was found in the campaign, and players should be able to navigate the expansion a little better because of that.  Just like Vanilla Bloodborne though, the Old Hunters has new items to uncover, new weapons to earn, gear to find, and big bad bosses to tackle.  The expansion features at least 10 new weapons to play with, assuming you can get through some of the game’s toughest challenges to date in four new boss battles.  While it’s recommended that the content is tackled by players that are around level 65, we found that even our level 80 character felt a little underpowered when entering the area for the first time.  That’s part because we hadn’t picked up the game in a couple of months, and partly because of the variety of new enemy types in this new location.  Smattered throughout the area are new types of Hunters, who are quick and deadly, with new attack patterns to learn.  You can very quickly become overwhelmed by both the variety and volume of enemies in this new location.  But like any of these games, play it enough, learn the patterns, and you can progress in due time. 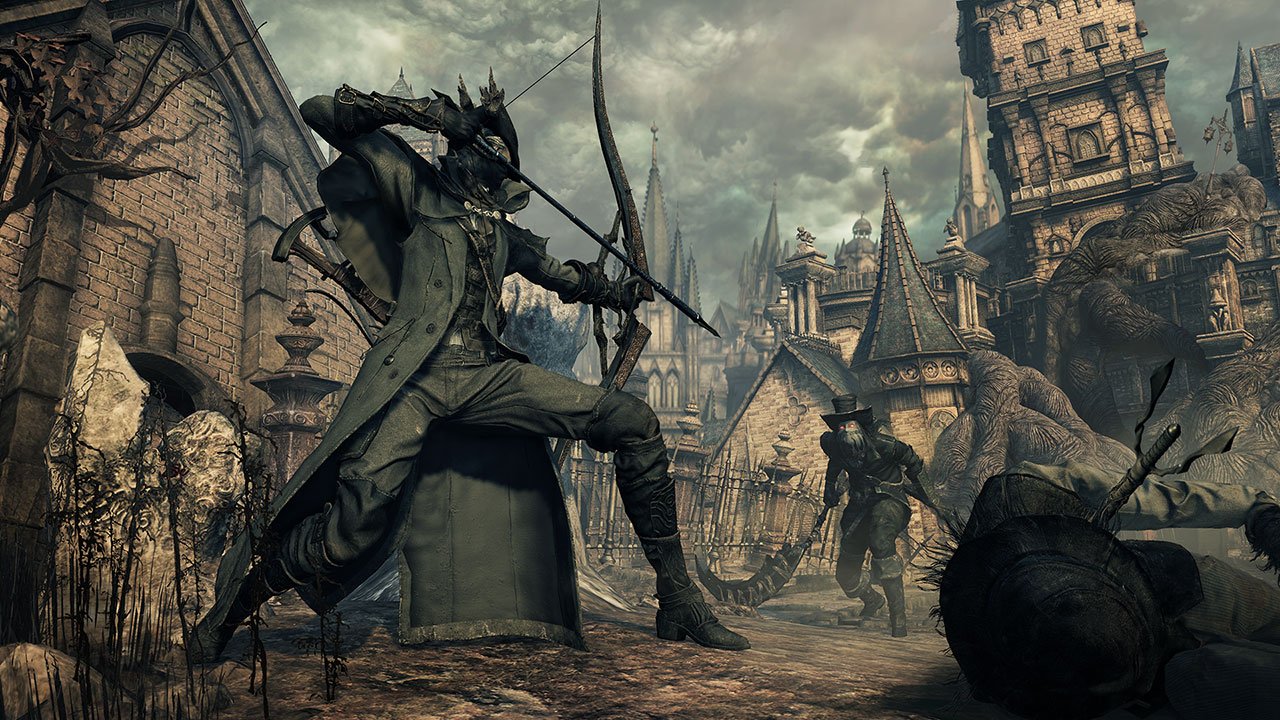 The Old Hunters keeps to a familiar formula for Bloodborne players.  You can still play with friends, leave messages for their broader Bloodborne community, and interact online in the same ways as you had before, regardless of whether other players own the expansion or not.  The Old Hunters just kind of fits into the bigger puzzle in the same ways that previous Souls expansions have in the past.  It expands on the game in a way that doesn’t alter the story that was already told to the players, giving them something else to explore in the process.  The unfortunate way that this stuff is incorporated into the world is that it requires players to have completed the game up to a certain point.  If, say, you aren’t at that point in the story and you just wanted to check out this new content, you’re not gonna be able to do that.  This problem won’t affect anyone that has a save past the point in the main story line where you’ve beaten Vicar Amelia.  If you haven’t beaten her, you’ll need to make your way all the way to that boss fight, just to be able to see this new area.  While this shouldn’t be a problem for many players, for the ones that this does affect it might be off-putting as they’ll need to play as much as 10 hours of the game before you even get a crack at seeing any new content.

From Software has never really been into hand holding of the player, and The Old Hunters doesn’t do this either.  There is absolutely no guidance for the player as to what they need to do to access the new content and that can be somewhat frustrating if you’ve just plunked down the $19.99 to play the expansion.  It’s not an incredibly difficult process to access the new stuff, but maybe a little bit more transparency could go a long way in helping players get to the content faster.  Because what’s there is good, whether you’re a seasoned Bloodborne player or someone just learning the ropes.

The Old Hunters is for better or worse, more Bloodborne. If you’re looking for a reason to return to Yharnam, this is a worthy expansion for the game.  It’ll give you just about everything you’ve come to expect from From Software RPGs — new enemies to fight, new weapons and items to uncover, a big new map to explore, and of course, the soul crushing defeats.