Brigandine: The Legend of Runersia Review

Sequel after more than 20 years. 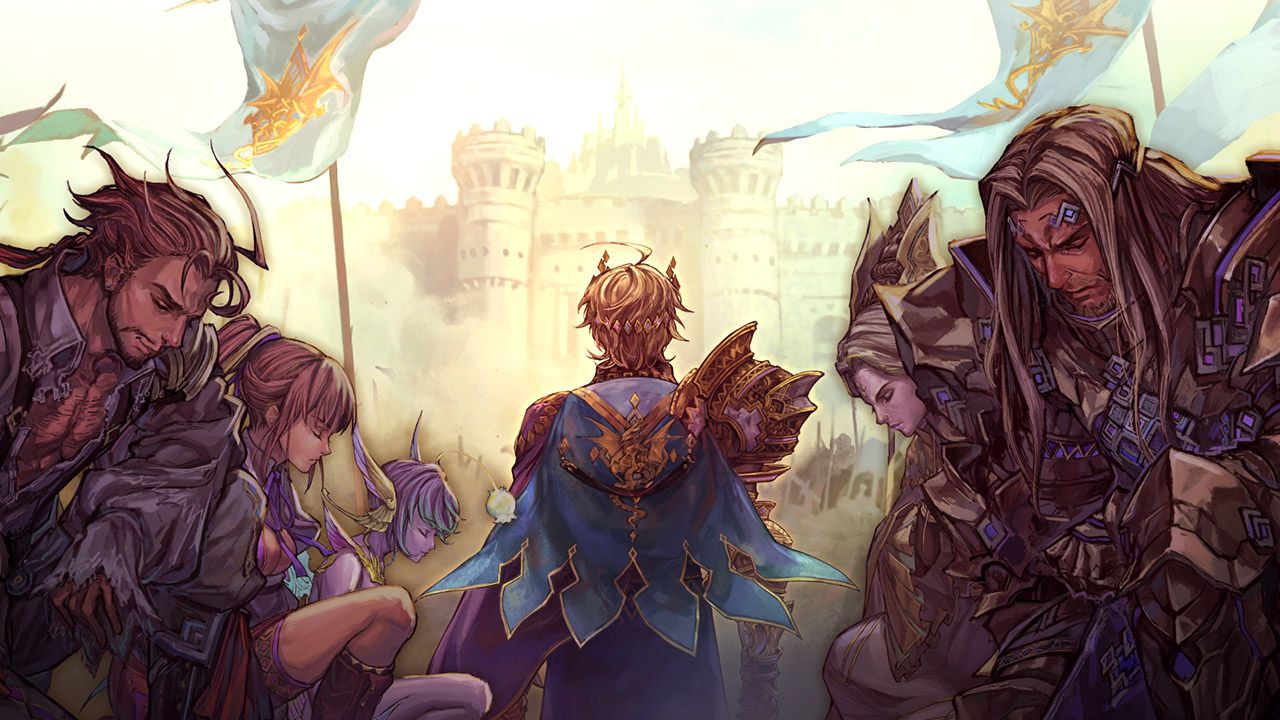 The tactical RPG genre may not be as popular as more traditional or action based RPGs, but series like Fire Emblem have helped to keep the genre going over the years. There have also been plenty of one and done series in the genre over the years from a variety of different developers, with one of those being Brigandine: The Legend of Forsena that released for the PlayStation in 1998. This made it all the more surprising when it was revealed the game was getting a sequel now 22 years later with Brigandine: The Legend of Runersia.

Brigandine: The Legend of Runersia takes place on the fictional continent of Runersia, where six nations are vying for control after a series of events that put each of them in direct conflict with one another. Five of the six nations are powered by a special Mana Store that has been imbued into their Brigandine armor and are based on the idealogy of the nation. The sixth nation may not have this direct power, but still strives to take over the continent of Runersia nonetheless. Each of these nations have their own Rune Knights that they send out to lead the way in battle in hopes of having a successful takeover. 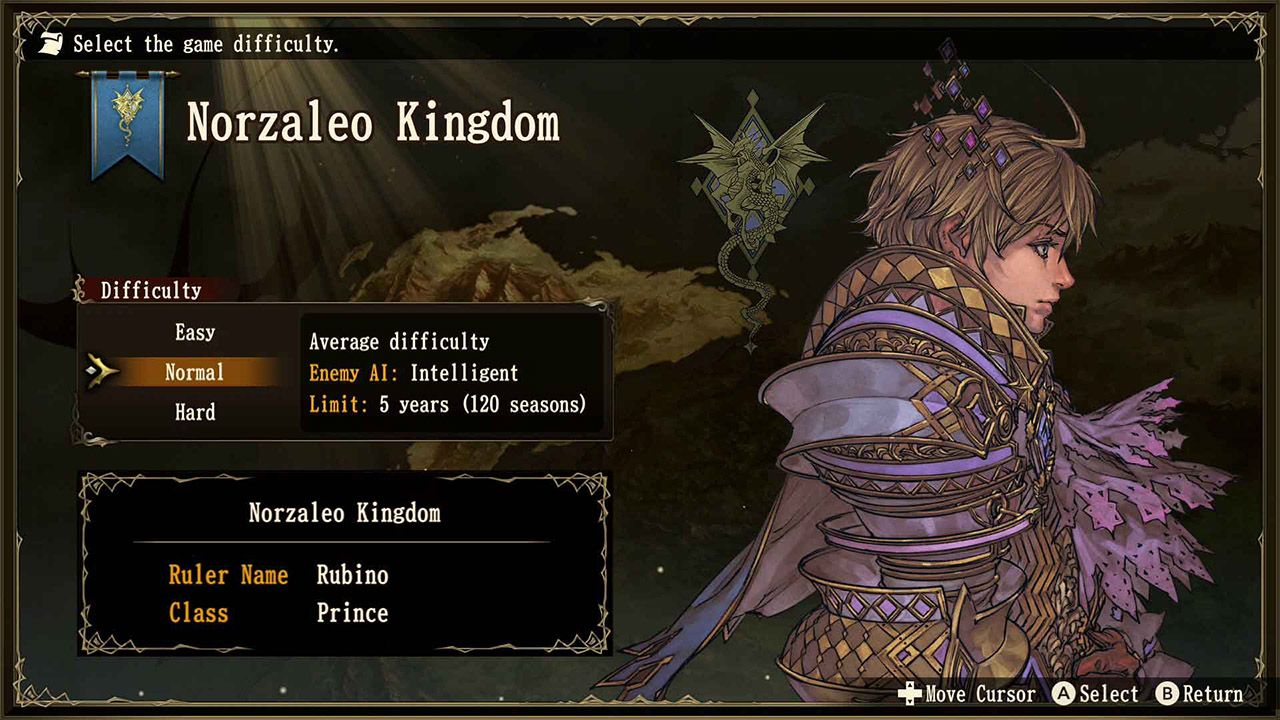 Just like the original Brigandine, you get to select one of six different nations to use in the game from the very beginning. These nations come with their own respective strengths and weaknesses that vary in their amount of troops and mana reserves available to start. This number may not be as apparent on how useful one is over the other for first time players, but it definitely helps on subsequent playthroughs.

The other major decision you must make at the start also is to choose between three difficulty levels that not only affect the AI intelligence, but also what the limit of your campaign length is while trying to conquer the other nations. The Easy difficulty level allows the player unlimited time to conquer the other nations across the expansive map, while Normal and Hard have set periods of time for you to complete the game with in-game seasons. These definitely add a good bit of challenge to the game, requiring you to push your troops ahead at a much more rapid pace.

Not only are you working your way across the map taking bases, but you also have the other rival nations doing the exact same thing as well that you must combat. They will try to take your own bases from you, which you must protect to stay alive. If you let up and let all of your bases get taken over, you will receive a game over regardless of how much progress you had made on the map prior. 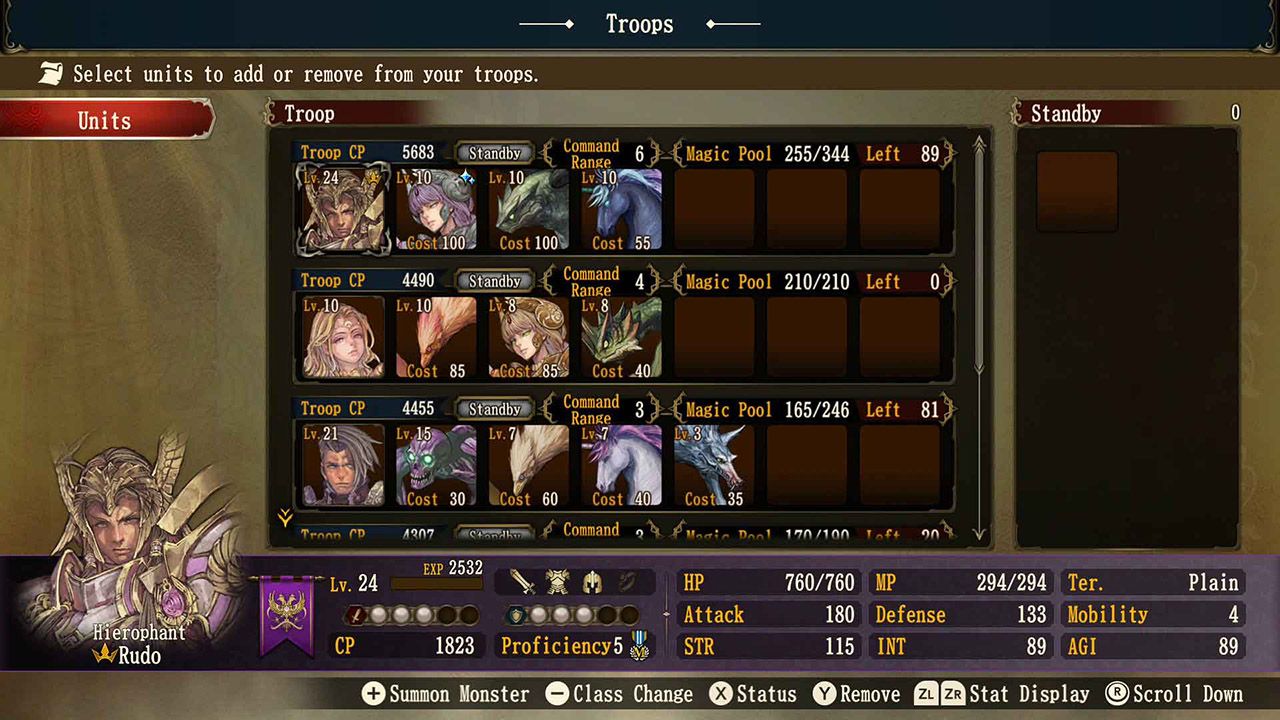 Brigandine: The Legend of Runersia’s gameplay is made up of a few different phases, starting with the Organization Phase. This phase is where you assess your various bases and prepare your troops for battle. Summoning monsters plays a big part here, as they will battle alongside your Rune Knights in battle after being summoned by using your Mana Reserve. After getting everyone ready, you can then move troops along to other bases to prepare for the next step.

Each base has a listed Combat Power, or CP, above it that is a good judge for how well you would fair against it in relation to the CP of the troops in your base that you are sending to attack and vice versa. This is where you will want to adjust your party to have more monsters in it if you can to up the CP and better your chances of victory, allowing for some strategy on which Rune Knights you want to place monsters as you’re trying to take over different bases.

Now comes the Attack Phase, where you can choose to attack adjacent enemy bases. This takes things from the overworld map into the actual locations between the bases for each battle. While the organization step and everything is quite complicated, the combat itself is much more standard for the genre. Each Rune Knight and its monsters are placed on a grid with the ability to move a certain amount of spaces per turn and then use Skills or Magic. Rune Knights and monsters are treated differently though, as the knights will retreat upon hitting 0 HP, while monsters will be destroyed outright instead. 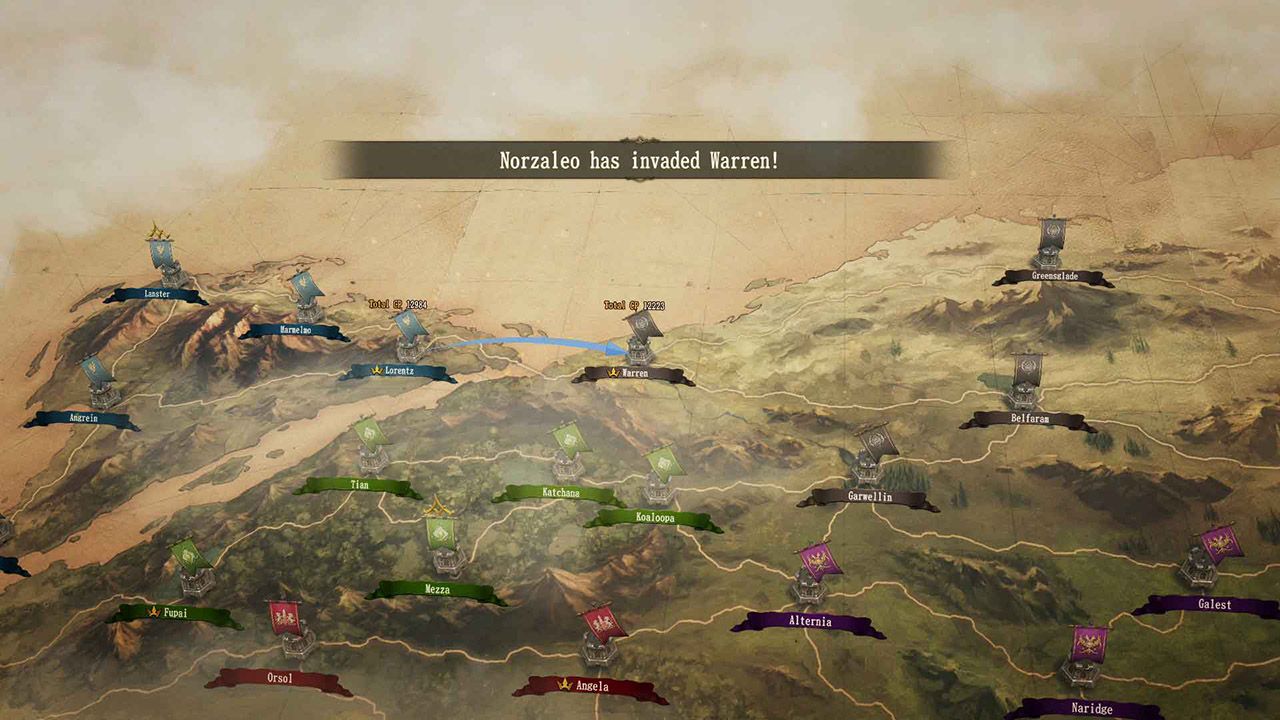 The combat is completely turn based as you go back and forth between the different Rune Knight’s parties based on their speed. This means you may have all of your troops go first or it may be a case where one goes first, then an enemy knight goes, and then you go again. The goal is obviously to take out the opposing Rune Knights as fast as you can while also watching out for the enemy summons, which makes the combat standout from other similar games in that way.

Rune Knights and monster summons will also earn EXP in battle that allows them to level up the more they participate in combat. For the knights in particular, this is very important as a way to access new classes to become much more powerful. This is something that was introduced in the first game and has been expanded upon with greater classes than before here in the sequel.

From the very start, Brigandine: The Legend of Runersia can be incredibly daunting, especially for those that are not as familiar with this type of game. There are a lot of intricate details you must learn about the gameplay to have any chance of survival against the other five nations, which can be taught through guides presented early in the game. For those that just aren’t getting it through the in-game guides, you have the option to choose an actual tutorial before starting up the game’s main mode. This is certainly the type of game that needed a tutorial, so it’s great to see such an in depth one being included.

Brigandine: The Legend of Runersia already has a lot of replayability with being able to go back and play as each of the six nations, but there is even more to enjoy with the game’s Alternate Chapter. This is unlocked after you complete the game’s main mode and serves as essentially a Challenge Mode. You not only get to select one of the six nations in this mode, but also which Rune Knights you want to use based on who you recruited during the main mode. The goal here is to achieve victory as fast as possible, with you being given a score based on your performance after all is said and done. 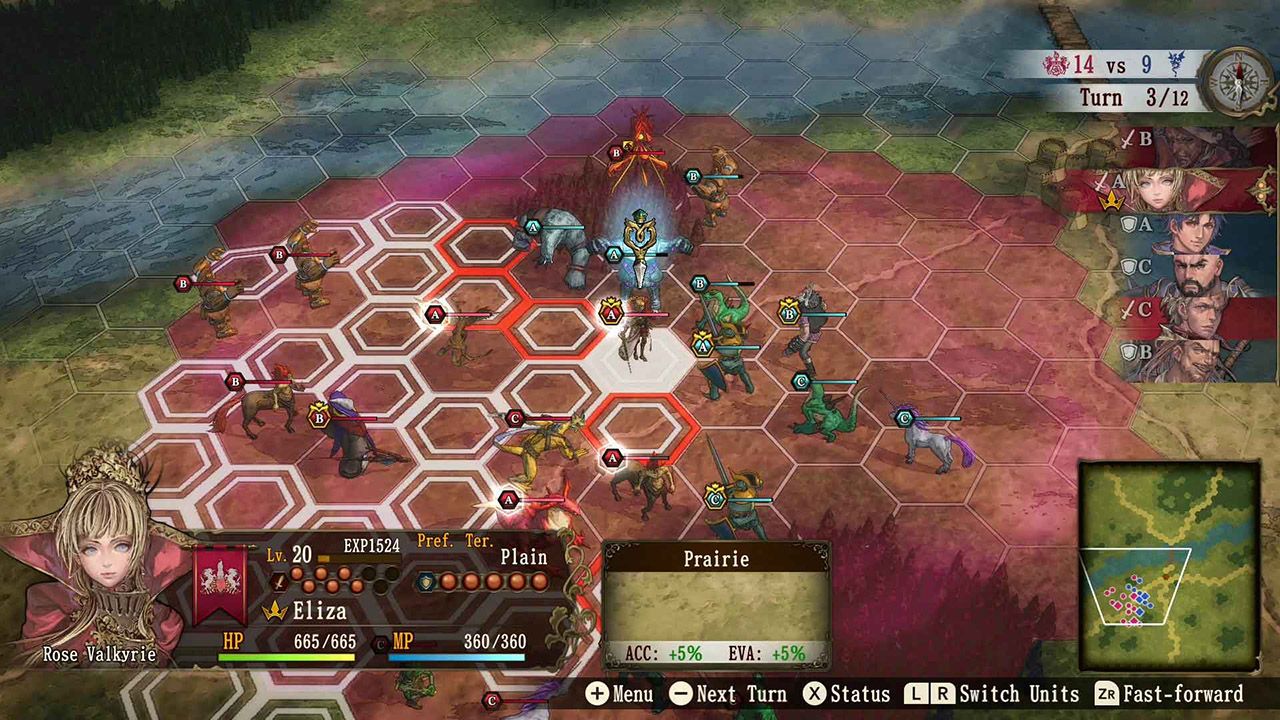 While visuals may not be all that important in a game like this, it is still worth talking about here. Cutscenes and character profiles utilize an art style similar in ways to Dragon’s Crown, though they don’t get used all that much in the game. The overworld just has little bases located all across a map, but it gets a lot more detailed within the battle system itself. This is still seen from a zoomed out top down view, where the characters each have little models that are used and look decent enough. This is paired with a solid soundtrack that helps to keep the battles interesting as well.

Coming more than 20 years after the first game, Brigandine is not a series many people expected to be revisited, much less receive a sequel. While there may be a number of other games in the genre that are still around, Brigandine: The Legend of Runersia proves why it deserved to be brought back by offering players a true challenge and hours upon hours of gameplay for you to enjoy.

Even with a new developer in charge, Brigandine: The Legend of Runersia builds upon the previous game with a lengthy campaign that has a ton of replayability, though players may feel pretty overwhelmed at first due to the complex gameplay.

Brigandine: The Legend of Runersia