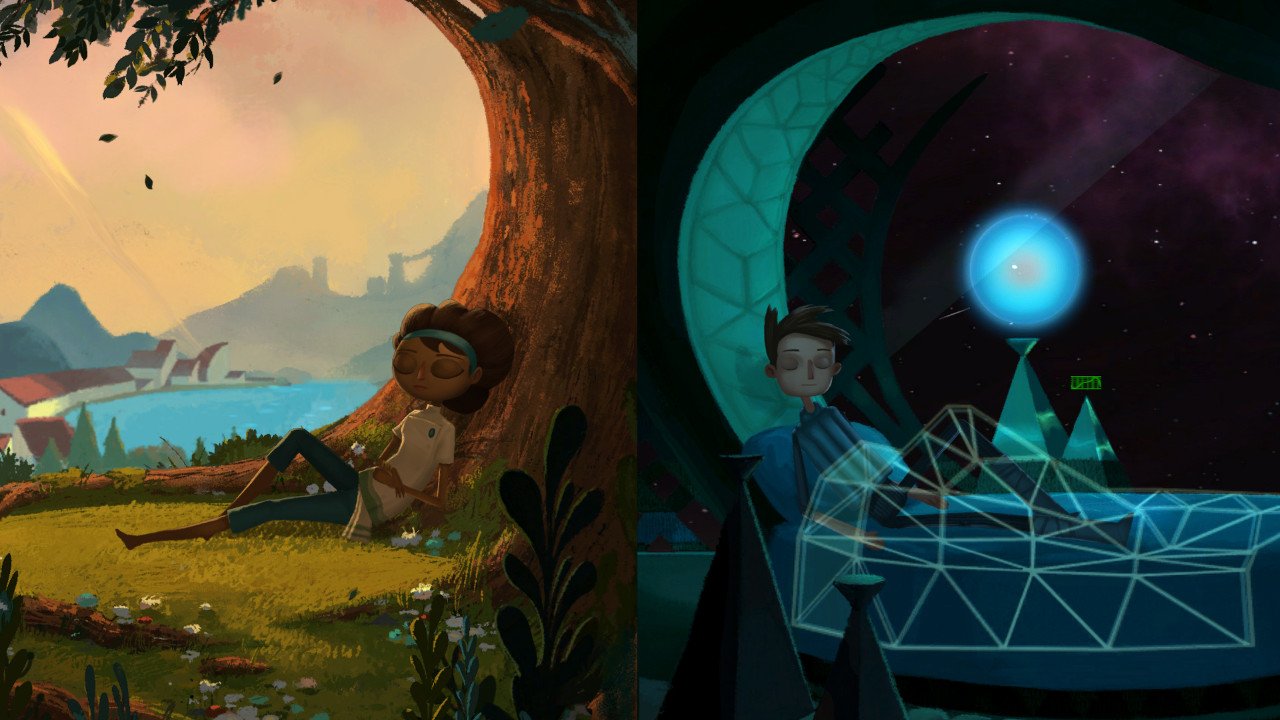 The story of Broken Age’s development is almost as interesting as the one contained in the game itself. It began life as a Kickstarter from highly regarded game studio Double Fine Productions. Offering the chance to relive the glory days of the point-and-click adventure game, Broken Age quickly won over an audience of devoted fans, being funded for millions of dollars. However, with success came issues as the team overreached and ended up having to split the game into two parts, releasing Broken Age Act 1 in January of 2014. Now, over a year later, Act 2 is out and both are combined together for a single experience on PS4. As we said in our review of Act 1, the first half offered a lot of promise, but did Act 2 deliver the goods?

Broken Age tells the story of two worlds, one of technology and one of religion. Shay inhabits the former, living out his teenage boy life on a spaceship surrounded by overbearing computer parents, and yarn robot friends who constantly need “saving”. The other world is home to Vella, a young girl about to be offered as part of the Maiden’s Feast, a ceremony where young women are offered up to the monster Mog Chothra. Through a series of events these two seemingly disparate worlds came crashing together in grand fashion, leaving the door open for some very intriguing story telling as the true nature of Broken Age became clear. 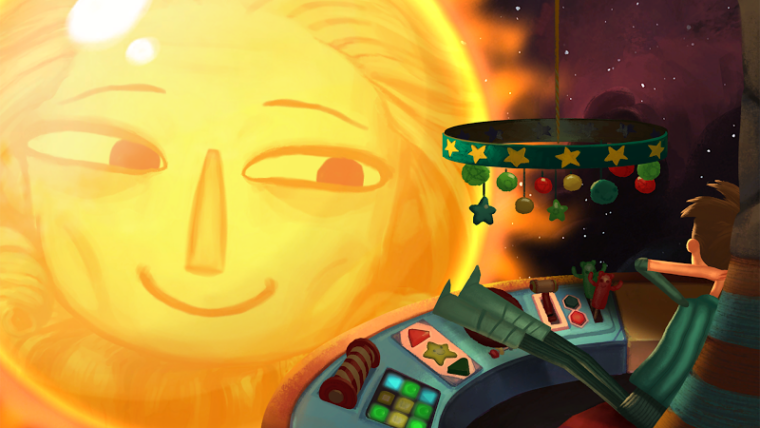 Unfortunately the promise that was offered in Act 1 is largely a missed opportunity as Broken Age Act 2 shifts to answering questions, but in a very poor way. Getting a bit into spoiler territory here, the vast universe that we thought we were exploring is actually a single planet, the Mogs are all other ships performing the same collection tasks that Shay was, and our two heroes remain separated, having simply swapped locales. One of the biggest disappointments that players will have with Broken Age’s second half is that it almost exclusively takes place in the same locations as the first.

Aside from a few offshoot areas, the entire game’s playable area is presented to them in the first half, and the rest of the game is spent wandering back and forth between the available areas for the rest of the running time. There are also practically no new characters to interact with, and given that part of Broken Age’s charm is in its creative character design, this ultimately holds the game back even more. The only things that Broken Age Act 2 offers that are new are the story and the puzzles. Sadly these parts still don’t do justice to what many players felt was a fantastic beginning.

The story of Broken Age always feels slightly out of reach of the player. You’re always doing something, but what that thing is might not be exactly clear, nor is the reason why you are doing these things. Once some of the mystery is gone the story shows itself to be not all that interesting really. Sure, there is some hidden meaning and a lot of metaphor, which is great to see in a video game, but the core of the story feels rather weak once you have a good look at the entire picture. Not enough information is given in important areas, such as how this world came to be the way it is, and too much is given in areas that should have remained mysterious, like some of the motivations behind the enemy’s actions. Broken Age will likely keep player’s interest throughout, but once they look back on the experience they will probably find it feeling a little hollow. 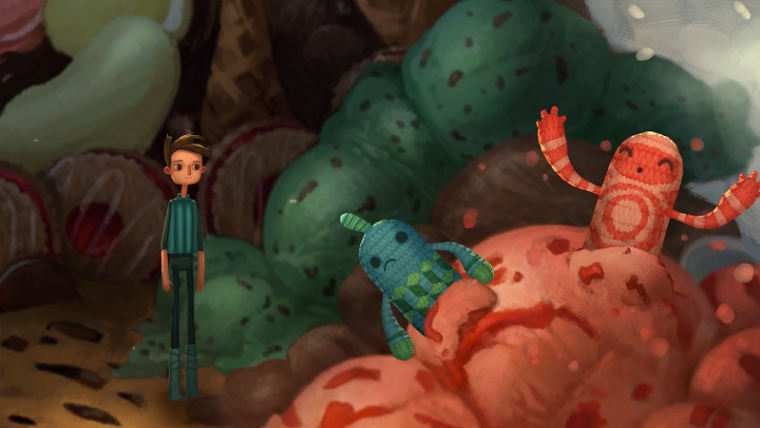 The gameplay too suffers from issues inherent to the genre. Broken Age was pitched as a return of classic point-and-click mechanics, and it delivers on that front, both for good and bad. The puzzles in Act 1 were largely enjoyable and easy enough to manage with a hint of the absurd logic that the genre is infamous for. This is further compounded and taken to extremes in Broken Age Act 2. Players will, for a good portion of the game, find themselves simply wandering around the same locations that they explored in the first half looking for any hint of something that will progress the story. Frantically clicking on any object that they can interact with and hoping that it has some different result.

Broken Age’s puzzles almost always end with a sigh, or an exclamation of “what?!” or “how?!”

All of the puzzles have a solution, but that solution almost exclusively falls into one of two camps. Either it has to be done in the exact way that the designer intended, or it makes no sense at all. The former is frustrating mostly because you can be on the cusp of solving the riddle, knowing the exact logic that is needed to get you out, but you either missed one tiny step that the designer felt was necessary, or you have to go through each step perfectly and in order.

The latter is frustrating for obvious reasons, as players will find themselves simply flabbergasted at the reasoning behind some of the puzzle solutions in Broken Age. Of course, if you are a fan of these genre conventions then they won’t be a problem, but for those that expect to have all the necessary information to solve a puzzle without wandering around, speaking with every character all over again and hoping for something different to come up, it can be almost game breaking. Great puzzle games work toward giving the player “aha!” moments, guiding them toward solutions while allowing for experimentation. However, Broken Age’s puzzles almost always end with a sigh, or an exclamation of “what?!” or “how?!” 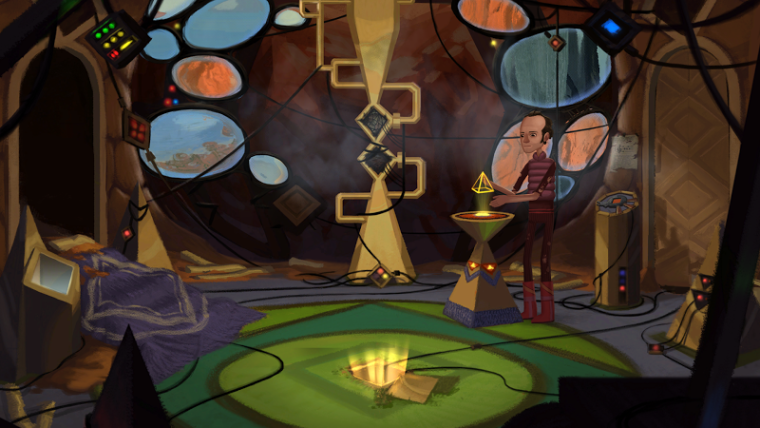 The nature of the puzzles is only worsened by the character switching mechanic. Throughout Broken Age, aside from a few key story sections, you can switch at any time between Shay and Vella. This is a great mechanic by itself as it allows players to swap to the other storyline whenever they run up against a logic wall. However, in Broken Age Act 2 there are many puzzles that involve information from both sides of the story. If it was some simple puzzle it wouldn’t be too bad, but this puzzle runs throughout the final chapters, involving multiple switches of characters, memorization, and possibly a save reset if you forgot some integral part.

Broken Age, as a complete package, is an enjoyable experience. However, it is a disjointed one. The first half offers players a look at a fascinating world, full of wonder and promise for stories to come. The second half fails to deliver on those promises and adds more flaws to the formula that weren’t necessary. However, the core elements that made that first half so much better are still there throughout. The world is beautiful, the characters are fun, and the voice acting is fantastic. Broken Age began life as a promise, and while it might not have lived up to its potential, it is still worth a look for those that enjoy the genre, or just want something different.