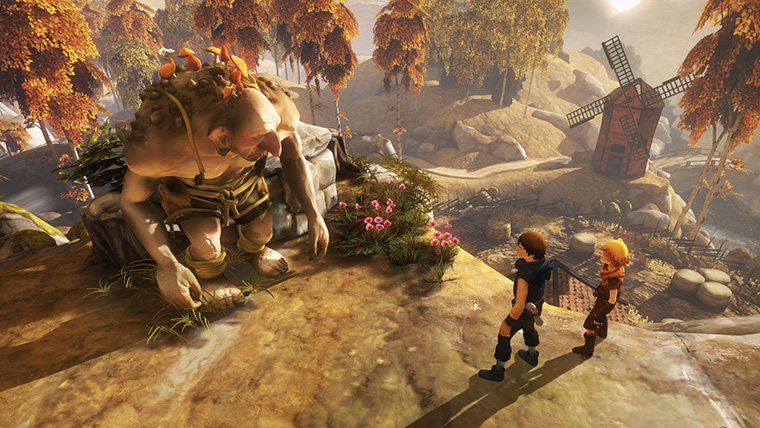 Starbreeze Studios did not make a name for themselves with the type of game that Brothers: A Tale of Two Sons is. This is a developer that is responsible for some of the grittiest first person shooter action in recent memory. The Chronicles of Riddick developers are not the first name you would think of when you conjure up thoughts of an artistic twin stick puzzle game. Nevertheless, it is Starbreeze Studios behind Brothers: A Tale of Two Sons. While it might seem like Starbreeze is an odd fit for a less action-packed affair, spend just a short while in this game world, and you’d think they’ve been making these types of games for years.

Brothers: A Tale of Two Sons is essentially a cooperative game that is played by a single person. You control two brothers, each with unique abilities, each controlled by one side of the controller. Using the pair, you’ll navigate through the puzzling environment, which requires you to utilize each brother’s skill set to progress. This includes performing simple tasks like moving objects or pulling levers, tasks suited for the bigger, older brother. Or sliding through narrow passages with the smaller, younger brother. If it sounds at all basic, it is. Each brother performs rather simplistic actions on their own, but put together, orchestrating the puzzle solving in Brothers is a unique and fresh perspective on this game.

Journeying away from home, in a game that has rather dramatic overtones, the two brothers are on a quest to save their sickly father. A magic elixir is what they search for in hopes of making him well. The emotional opening moments of Brothers: A Tale of two Sons sets the stage for why these two boys are risking life and limb on their own, in the outside world filled with mythical creatures and treacherous environments. Getting the hang of Brothers is easy. While these opening moments give you plenty of reason to set out on your journey, you’re also given ample time to get up to speed with controlling the pair.  Don’t fret,  things do get hairy down the back stretch of the game. Requiring more and more precision from the player as the journey progresses.

As you become more adept in controlling the two brothers and the challenge ramps up, so does the beauty in Brothers: A Tale of Two Sons.  Presentation was obviously a big focal point for the team on this title, the fantastical adventure will take you to some amazing locales filled with beautiful lush environments.   These environments do most of the story telling in Brothers: A Tale of Two Sons.  Since the two main characters never speak a word to each other over the course of the adventure, their journey is told through pointing and emotional reactions that sound more like grunts and groans than any recognizable language.  Regardless, it still serves its purpose in directing you to the appropriate places to continue your story.  It’s part of the puzzle itself.  Deciphering what you should do with the clues given to you by an NPC and/or your partner, as  well as looking for anything that could be interacted with in the world.

Unfotunately, at 1200 MSP with very little replay value, it’s hard to wholeheartedly recommend this title.  There isn’t much to do when you’re through with your adventure, unless you’re an achievement hunter of course.  But if you find value in that initial playthrough and like the experience of playing something that feels refreshing, it’s certainly worth the time and cash.   But if you’re the type of person that values only how lengthy a game is, there’s not much replay value here, and the main quest is fairly short.

Brothers:  A Tale of Two Sons isn’t a long game, and it probably wouldn’t be as good as it is,  if it were any longer.  It’s a game for those that are looking for something a little different, with very relaxing qualities.  Summer of Arcade always has one, and Brothers: A Tale of Two Sons might be this year’s LIMBO.  The commitment to making a unique adventure game that both tries to tap into your emotions and offers a unique control scheme is commendable.  Wrapped in a beautiful art style reminiscent of the Fable franchise with an obvious commitment to polish in the presentation department, the best of the Xbox Summer of Arcade may have already arrived with Brothers: A Tale of Two Sons.

Brothers: A Tale of Two Sons