Call of Duty fans that have turned to Nintendo for their shooter fix each year have grown accustomed to a low-res, underpowered version of the game, which by most accounts, pales in comparison to that which is the biggest entertainment launch of the year on Xbox 360 and PlayStation 3. With a beefier set of system specs to work with, Activision brings forth Black Ops II on the Wii U, and it doesn’t miss a beat when compared to what which were previously considered superior versions of the game.

Nearly everything that we covered in our Xbox 360 review of Call of Duty: Black Ops II rings true here. The single player campaign is an interesting yet familiar journey into a new timeline for the franchise, and this branching storyline has made no considerations on the new console as far as the sights, sounds, and feel of the game. If anything, the Wii U GamePad expands on the Call of Duty experience, adding things that the Xbox 360, PlayStation 3, and PC versions of the game just don’t have. 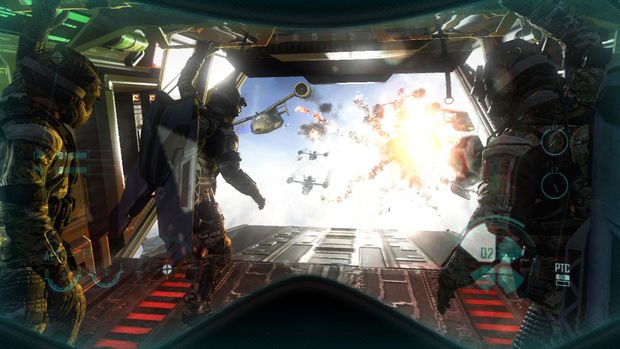 Whether looking at the game’s single player modes or online Zombies and Multiplayer options, you’d be hard pressed to find any differences between the Wii U version of the game and its competitors. We went back and forth looking at the game on the Wii U and Xbox 360, and the naked eye couldn’t tell a difference, the game still seems maintain its solid frame rate, featuring all the explosions and bombastical nature of a Call of Duty game. With little to differentiate the games on consoles from a visual or gameplay standpoint, GamePad integration is probably the biggest differentiation here.

Black Ops II supports both the Wii U GamePad or the “Pro” Controller for a more traditional gameplay experience. Using the GamePad with a TV display, players will have access to the content usually reserved for the pause menu. That means in multiplayer you’ll have access to a map, your load-outs, controller options, and added features like Scorestreak rewards. Instead of the traditional fumbling with the d-pad, these items are available by touch on the device. However, the GamePad can also be used to play the game in its entirety from the second screen. If you switch the display mode, you can shut the TV off completely and play a full featured version of the game with just the controller. Depending on how strong the signal is between the Wii U console and the GamePad, you’ll see zero loss in quality. Sure, it’s definitely harder to see enemies on the smaller screen, but it’s surprising at how playable it actually is, whether in the online or offline modes. What sounded like a gimmick when I first saw it, turned into something that I actually started using as I dug into this port.

Black Ops II on the Wii U also features both local multiplayer and the ability to play local co-op avoiding having to use split-screen due to the technology in the GamePad. Of course, you’ll need a Pro Controller to do this, but its a cool feature nonetheless. This GamePad integration carries into the single player and zombies modes as well. You can play both modes solely on the GamePad if you want, but the controller offers smaller gameplay tweaks with these two modes. Single player only offers objectives on the GamePad as a second-screen, unlike the wider range of options on the multiplayer side of things. It would have been nice to see some bigger enhancements to these two modes with the GamePad at Treyarch’s disposal, but at the same time, it stays true to a uniform experience across all platforms. 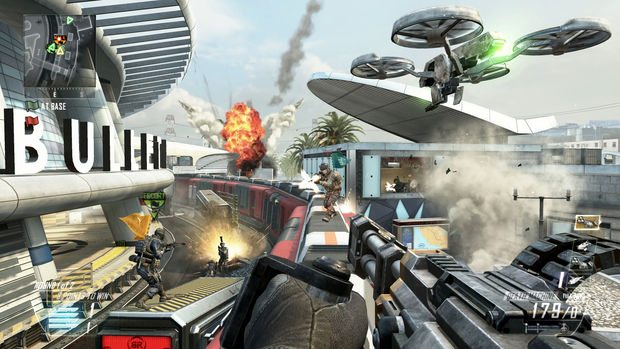 The real big difference between Black Ops II on the Wii U and other platforms is the online communities at this point. Being that the Wii U launched just a short while ago, and the installed base is much smaller than that of the Xbox 360, PlayStation 3, and PC, the player counts are much smaller on the Wii U. You’ll won’t find the hundreds of thousands of other players playing online at any given moment, and at certain points in the day or night, it may be hard to find a game unless looking in some of the more popular modes. As the Wii U base expands, holiday wish lists are fulfilled, and word of mouth gets around that Black Ops II on the Wii U is quite good, these numbers will likely increase.

There are some unknowns surrounding the Wii U version of Call of Duty: Black Ops II. Will players get the same level of engagement from this version? Some features like the Call of Duty: Elite functionality and Season Pass DLC are still unannounced. Playlists that have already arrived on the Xbox 360, PlayStation 3, and PC versions of the game are yet to be seen on the Wii U. Online stablility can be a mixed bag as well. Since the community is so small, and relies on peer to peer connections for its online features, you can find games that run exceptionally well, all the way down to those that are nearly unplayable. The problem is, there’s such a small pool of people that matchmaking system on Black Ops II for the Wii U deems as “host-worthy” so getting into games that don’t work for you is more prevalent considering the small sample size. At least that’s how my logic rationalized the difference I saw in game connections and stability variance. Is this a sign of things to come for this version of the game? It’s still too early to tell, but since the online community is rather small right now, it’s likely that Treyarch isn’t hearing much demand from Wii U players at the moment.

The online functionality is unique however, and is quite promising considering the way that Nintendo integrates the Miiverse with Black Ops II. From the Wii U launch screen you can chat directly with Black Ops II players, arrange games, and look for like minded individuals that may be looking for a partner in zombies mode or teammate for online multiplayer. It’s more of a system wide feature for the Wii U, but functions similarly to the community organizing that Activision features with Call of Duty: Elite.

As far as the third party launch lineup of games go on the Wii U, you’ll have a hard time finding a better example of the Wii U’s power as with Black Ops II. It does everything that the Xbox 360 and PlayStation 3 can do, and in some cases it does it better. We’ll have to wait and see if the franchise will gain the type of popularity it sees on other consoles, but it definitely has the potential to do so. For more details about the game’s single player storyline, and more in-depth view of the game’s online modes, check out our Black Ops II review for the Xbox 360.