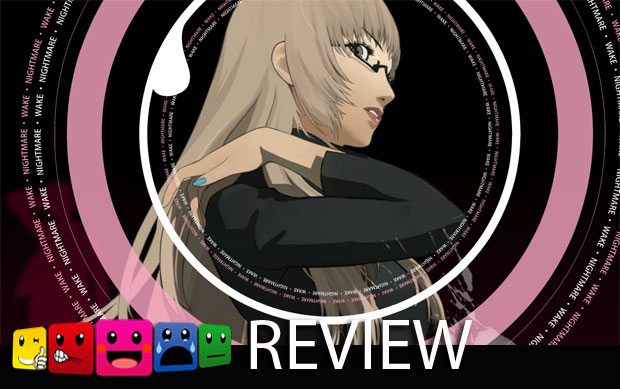 Vincent really likes his girlfriend. Katherine’s pretty, smart, and successful. Trouble is, now she’s sat Vincent down for “the talk,” and Vincent’s spent his entire life trying to avoid long-term commitment.  Since romantic complications are the last thing he wants to deal with, Vincent meets his friends for their regular night of drinks.  Little does he know that he’s about to be blindsided by a drop-dead sexy freight train named Catherine.  When the morning comes, he’s hungover in bed next to the most beautiful woman he’s ever seen, unable to recall the previous night’s events.  Was it just harmless fooling around, he wonders, or did something more serious happen between them?  Should he tell Katherine?  Will he ever see Catherine again?  Vincent’s about to discover that stumbling on the stairway of love can turn into a horrific, fatal plummet… – Atlus

Beautiful Artwork – If you are a fan of anime you’ll love the direction that Atlus takes Catherine, its a wonderful looking game that is driven by beautifully rendered cutscenes, and equally well-done gameplay segments that shimmer with glow of extra care given to the finer details of the game’s art.  The game manages to be stylish and sexy in one fell swoop, but it’s the way that it handles both the beautiful and the macabre that really make it stand out.  There’s a stark contrast between the beautiful details of Vincent’s love interests in the game, and the supernatural presences that will hunt you down while in dream state, that give the game extra points in the graphics department.  If anything, the game definitely develops a personality from the colorful and vibrant art that is littered throughout the experience.

Stylish Presentation – Equally impressive as the in-game gameplay graphics, and cut-scenes, Catherine’s presentation is rather svelte as well.  The manner with which Catherine is presented to the player is perfectly themed with key factors like music, menus, navigation and other imagery continually tempting your senses to push further into the game.  Music is exceptional in Catherine with the inclusion of many timeless classics that have be remixed for the game.  Fans of the Persona team will definitely feel at home with the selection that has been provided the player, and unlockable through a jukebox at the Stray Sheep bar, where Vincent will spend the majority of his non-puzzle solving time.

Land of the Rising WTF –  It’s no secret that the Japanese gaming culture is much different than that of the rest of the world.  Titles coming out of Japan have been, well, strange when compared with what is now considered normal.  At its core, Catherine is a puzzle game.  A pretty simple puzzle game with some variable elements and tiered difficulty.  At it’s most basic level, Vincent is tasked with climbing a nightmarish tower where he confronts his personal demons and inner-most fears.  These fears come in the form of giant aberrations of his imagination that chase him while attempting to solve climbing puzzles.  On its least basic level, Catherine is a life simulator that asks players to question their personal morality.  The game tackles questions that have never been tackled before, and enters moral ground that has never been entertained in the medium, at least not to the mainstream gamer.  What is a gamer to do when faced with the moral dilemmas that Catherine poses?  Well that all plays out in the game.  While these two features are just a portion of Catherine’s WTFedness, you’ll find that the entire concept of the game is pulled together on these two key deviations from the norm.  It’s accentuated by the incorporation of strange imagery, voice, music, and style that is sure to tickle many that are looking for something different, or just tired of the traditional mechanics of games today and the ho-hum heroes that accompany them.

Marketing – If left up only to marketing to make a decision on Catherine, you might be pleased/disappointed to find out that Catherine isn’t a Hentai simulator.  The questionable marketing certainly drummed up interest for the title, but the end product is not even close to what it makes it self out to be.  The marketing could certainly be considered as raunchy by some, the anime figures striking suggestive poses led me to believe that Catherine was something else.  I suppose in retrospect it’s hard to envision how one goes about marketing a game about block puzzles and morality while making it seem cool, and that answer was, Sex.  I was pleased that the game didn’t turn out to be nearly as blatant as its marketing.

Uninspired Puzzles – As mentioned, Catherine is a game about morality.  Though to get to the tough moral questions that you’ll face, you’ll need to make your way through an extensive series of puzzles.  These block puzzle portions of the game make up the whole of the challenge of Catherine. These interactive puzzles are the most intense portion of the game, and are triggered by events that lead up to Vincent going to sleep each night.  These puzzles represent Vincent’s nightmares.  In them you’ll be tasked with ascending to the top of these block based puzzles by manipulating your landscape, connecting block edges to form numerous formations for Vincent to traverse.  Pushed forward with a timer that continually removes blocks from below you, your goal is to reach the top before the bottom falls out on you, and you die.  Each night that Vincent goes to sleep, he’ll experience these nightmare sequences and each one will be themed somewhat differently.  As the puzzles evolve, new elements will be incorporated into the puzzle solving mechanics.  Starting off simply and working its way into harder and harder, more dynamic situations that require inherently more thought to master.  There will be enemies to avoid, power-ups to aid you, and of course the ever present threat of the disintegrating surface below you.  The puzzles are broken into stages with most Nightmare sequences having a build up to a boss stage where you will not only be pushed higher by falling blocks, but by a creature from your psyche trying to kill you.  The creatures that chase you through your nightmares are indeed a bit weird and range from giant morbose toddlers, a demon bride, or a butt face thing.

There are plenty of ways to accomplish your goals, but in the end, the puzzles being the only source gameplay that breaks up the story telling aspects of the game falls short in some regards.  Mostly because of the lack of variety.  The game definitely progresses in difficulty, but even with new additions they can become somewhat redundant.

Choices but Why – I found it hard to discern where exactly my choices were leading me in Catherine.  The game provides you with a meter that constantly tracks your responses to certain events as good or evil, but I found it hard to measure my progress in the game.  As a morality simulator that forces you to continually be bad, there’s little incentive to continue making the computer deemed “morally right” choices for Vincent.  You still end up in the same predicament regardless.  I suppose that leading up to the end game this makes more sense considering that there are multiple endings depending how you choose to play the game, but the constant reminder of these choices throughout your decision making process is somewhat misleading and has little to no impact on the gameplay itself.

You’ll be earning morality points for various actions throughout the game.  Answers that you give, phone calls that you make, people you help, all play a larger role in the final outcome of the game.  Though this is only in the final outcome of the game.  It seems to bear little on how the game plays out itself.  It leaves the game feeling a little bit dry, lacking some substance when the choices you make go either unrewarded or unpunished.

Ultimately Catherine’s style and grace couldn’t bring me on board fully.  While the game’s ideas work in many ways, I personally found myself rushing through puzzles to rush through story aspects of the game, and with all that rushing I was left with a game that felt like it lacked in substance. While the tale behind Catherine is one that you definitely want to see, it’s the journey that makes it somewhat flat.  Catherine’s appeal certainly isn’t wide, and although many parts of Catherine are refined and enjoyable,  the repetitious nature of Catherine’s core left me wanting more from the puzzle aspects than just harder difficulty levels.  For a niche, Catherine could be quite an enjoyable artistic romp through the bowels of morality.