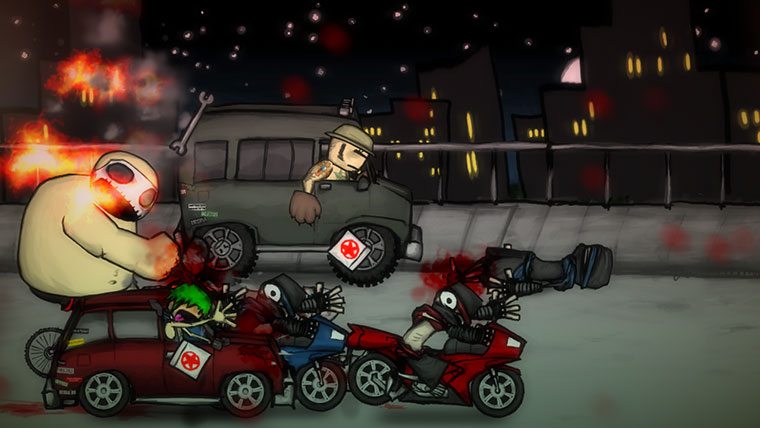 Charlie Murder is a side-scrolling brawler, best played co-op, with smatterings of RPG elements glued together by game design that oozes style.

It’s a highlight in a pretty bare ‘Summer of Arcade’ promoted by Microsoft on Live, and the game echoes a clearer take on developer Ska Studios’ The Dishwasher  titles.

You play as members of the garage punk band Charlie Murder,  fronted by Charlie Murder, backed up by guitarist Lester, bassist Tommy, drummer Rex, and backing vocalist Kelly, in a quest to defeat the (more) evil Lord Mortimer and his band Gore Quaffer in the battle of the bands.

All of the band members have a class, with Charlie being a Berskerker, Lester being a Mage, Tommy being a Shaman,  Rex being a Tank, and Kelly being a Mesmer. The major difference between each is how the games Anar-chi specials are played out for each character.

No Sex, Some Drugs, & Rock Bands

From the title screen, the bands music is played – those who never much liked the Sex Pistols may be deterred here if it weren’t for the games fourth wall humour of the genre, and the bands situation. The band music, and the background music played throughout is of a great quality, and reinforces the feel of being a band member as you battle the undead to punk, metal, and other rock music.

You begin the game in the Netherlands, a portion of the games hell, but the band member you’re playing as then awakes to being resuscitated on Art Street , fighting of the undead. This game is not one about hyper-realism and coherent plot lines.

Special attacks are done by holding RT and hitting X, with each character having four unique specials, which are edited by getting inked at tattoo shops scattered across world map.

Boss monsters are introduced with little formality; boss name pops up, monster roars, beat up monster. Finishing off the boss’ is an ultra violent delight, where you usually kick and punch the downed creatures head until it explodes into a bloody pulp. You sometimes get a chest of goodies for your efforts, and other times more waves of enemies to contend with.

Enviromental objects, from rubbish bins to stop signs, can all be used to batter the undead, pirates, rats and ninjas you encounter in the games loose storyline. You can pick up defeated foes limbs with X to slap anothers, or throw a grenade into a car to clear your path of car wrecks and zombies.

The games style is more clear cut than The Dishwasher series, but it is still a low-fi indie experience, and revels in that, with small touches like those above making up for what is lacked in hi-fidelty gloss.

The graphics are not stunning, but do get creative in one side-quest which sees the band take random pills from a bench before murderising a forest through a psychedelic filter.

Get Drunk, Become a Punk Wizard

Brewing is the new Alchemy in Charley Murder, where you can take barley and malt to be mashed into lovely, fermented booze. Naturally, this gives you stat boosts, and unlike real life, they’re not imaginary, and can make you punch harder, run faster, and heal instantly.

You get the chance to make a sandwich at one point, but it turns into a mutant employee/sandwich monster.

Throughout, you have a smartphone to hand, which allows you to engage in a few digital activities. You get  followers on Squi.ddl.us, a Twitter like social network, with fans earned by word of your monster slaying reaching them in the world.

You make a sandwich at one point, but it turns into a mutant employee/sandwich monster.

If you take pictures with the built in camera, in game QR codes give you free stuff, like booze and sunglasses. Clothes also boost your stats.

Cash is earned from boss kills, and dropped in coins and notes to spend on clothes, food, and tattoos gives the game a straightforward dollar currency to use in a bunch of in game stores.

Bars sell you booze, general stores sell clothes and various stat boosting foods, pet shops sell you murder-enhancing birds, toads, and more, and the in-game radio chatters about the band, the world, and rock music in the background, strengthening the games stand-out character.

The humour and style pervades every inch of this tightly packed brawler, with loading screens reading ‘loitering…’, walls sprayed with anarchy riddled messages, and the whole art style blending with the in-jokes to create a special little brawler.

Violence is relentless, but cartoony. You’ll blow up cars, throw zombies on power cables, chuck ninjas into giant circular saws, and speed along on broomsticks with SMG’s, shotguns, pistols, and snipers, shooting witches and ninjas from every angle.

The brawling is broken up by gameplay changes such as rhythm games revolving around band practice and gigs prior to the ‘fall’ (the game worlds current state), rising as rockstars past the battle of the bands. It’s funny, and even pleasant to play. Less so if you’re not a fan of the style, but the humour is to be appreciated in a tight rhythm mini-game.

Vehicles also come along to break things up; expect shooting witches with in high-speed broomstick battles, taking out streets of zombies on choppers, and stabbing eagles on ascending grappling hooks.

This game was made for co-op. It can be a decent brawl with one player, but online, and better, local play with friends really makes this game shine.

It’s funny going from punching zombies to shooting dynamite-bound sharks and sea monsters, but all the more so when your friends take up arms with you. Four players online can become a little hectic in later stages, with the smallest lag spike really affecting the tight constrictions of a multi layered 2D brawler, but it’s seamless locally or with 2 players online.

You can battle your friends at gyms scattered through the world to see who’s best, and the game does fly by with 4 players instead of 1.

Single player gaming gets way more difficult, but there are a few less enemies, and with plenty of beers and beanies, you can easily get to the end, albeit with a longer playtime.

This game is a blast from start to finish, and best enjoyed with a friend. Strangers work too, and it’s worth a look even for the lone indie gamer.