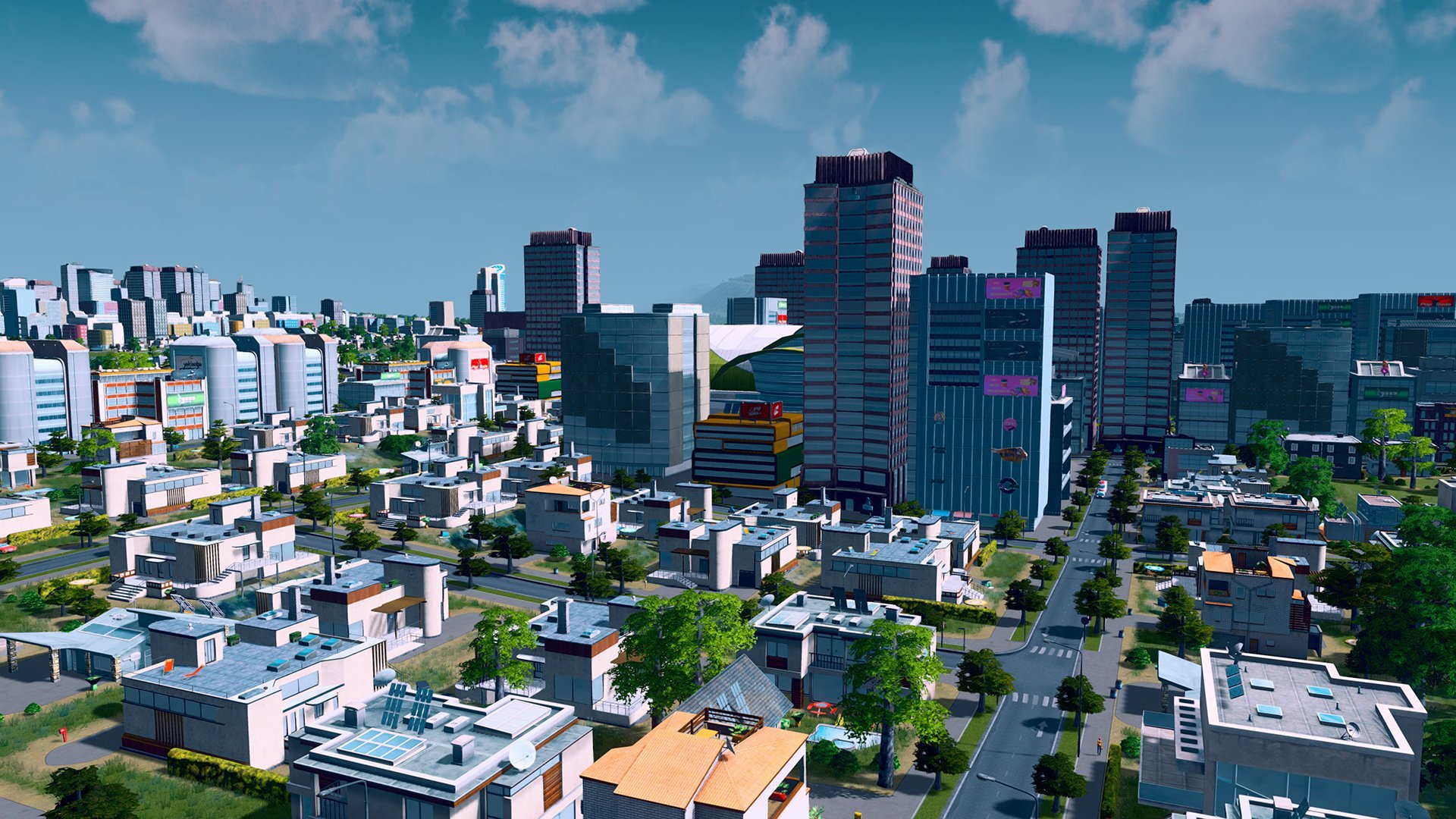 The old adage goes, “Rome wasn’t built in a day.” Clearly, the person who came up with that saying has never played a city-building game. For you see, that’s the allure of city-building games; to build and maintain a flourishing city, perhaps modeled to look like the one you live in, and watch it grow all in the space of hours as opposed to decades. The Maxis created SimCity series had been, for a long time, the king of the genre, but ever since the debacle in 2013, the throne has been largely vacant. Until now. 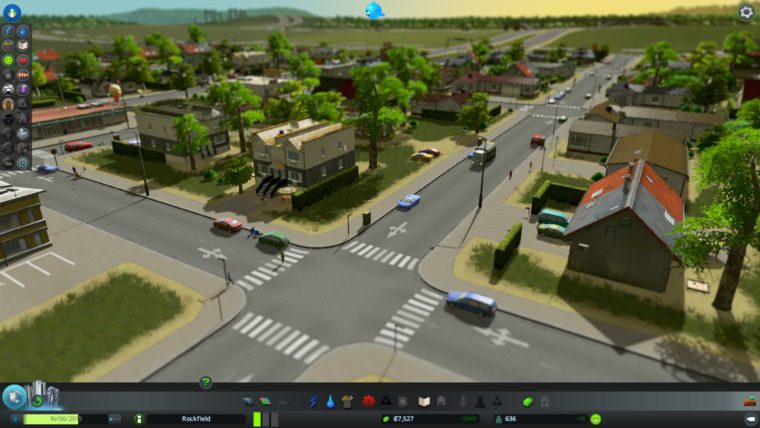 Now I don’t want to give people the impression that Cities: Skylines is re-inventing the wheel for the city-building genre. If anything, they are merely improving and tweaking the wheel to fit modern standards so that we are no longer consigned to playing games made more than a decade ago for a good city-building sim.

You might be thinking, “well hold on, if all they’re doing is just making the game modern, how good can it really be? Am I just playing SimCity with good modern visuals?” To that I ask you, would that be so bad? Still, Cities: Skylines does bring some pretty good new features to the table. 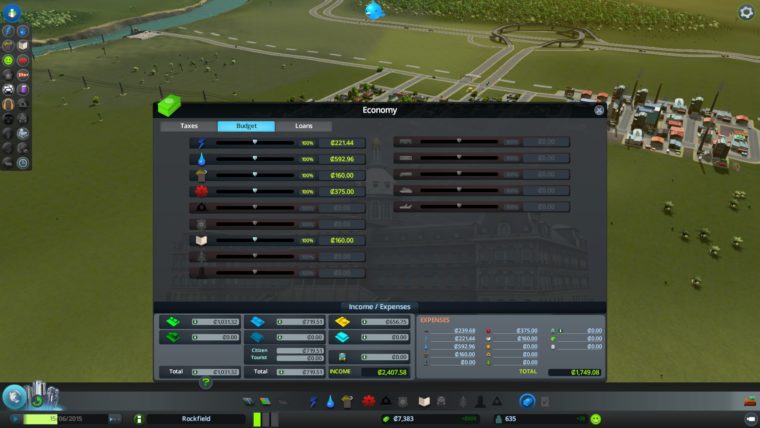 One of these things is the fact that the amount of land your city encompasses isn’t just limited to the 2km x 2km square that you start with. You get to “buy” more adjacent land tiles to eventually encompass 36 square kilometers of land, and that’s without mods that can bring it up to 25 tiles or 100 square kilometers (you will, however need to a pretty strong rig for that).

Another interesting thing they’ve done is uncouple the idea of commercial and office buildings. Commercial buildings are like shops, departments stores and cinemas, which historically was jumbled up with office buildings. Now they are two separate things, thus allowing you, the player, a lot more freedom when it comes to deciding how your city will be laid out. This makes it so that you don’t have specks of office buildings where you want your retail district to be and random supermarkets in your downtown office areas. 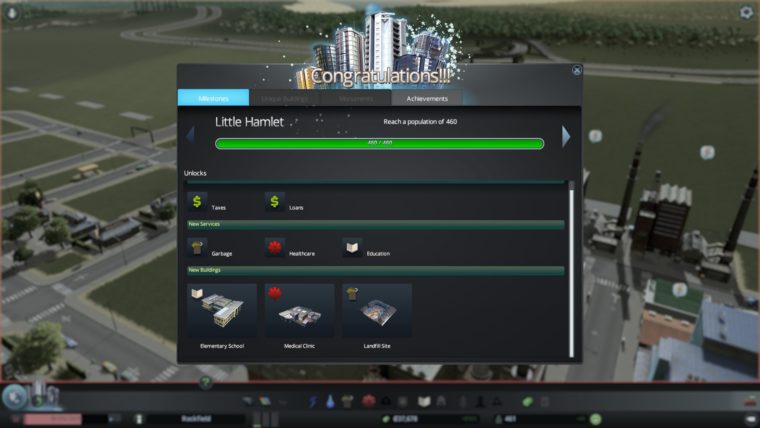 Speaking of districts, that’s also another pretty cool feature that Cities: Skylines brings to the table. You can now draw out what constitutes a district and actually give it a name. The “Danny is Awesome District” you say? Don’t mind if I do!

Districts aren’t just purely aesthetics though as you can set different policies for each district to better cater to what you want those districts to be like. Notice a lot of the heavy-duty goods lorries are barreling down through your sleepy suburbs streets to their destinations and not using the handy-dandy multi-laned, faster speed limited road you built for that exact purpose? Set the district to ban large trucks and, voila, trucks go around the district and onto the proper roads, just as you intended.

Cities: Skylines also does a good job of pacing the development of your town, Most things will be locked and unavailable to build in your town until certain milestones, usually populations size, are met. This is good on many levels as it prevents you from over-investing in infrastructure and services that you can barely afford as it is. It also makes up for the fact that the game lacks a real tutorial, as playing through it the first time you will get the gist of it pretty quickly and you’d have to really try to mess things up. That is, assuming that you have had even the minutest exposure to city-building sims. 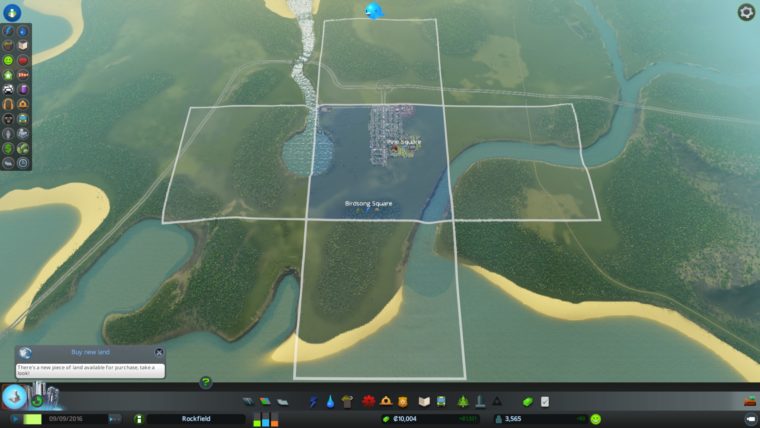 That’s not to say that the game isn’t hard. Sure you can barrel through, just placing things willy-nilly without thought, and probably get yourself a decent sized city, but problems can get out of hand quickly. Perhaps you thought the place you put your sewage outflow pipe was fine as the water went downstream and your city was nowhere near that, but then you bought that piece of land and realized that you couldn’t just pump water up from the river anymore because it was filled with sewage and making your citizens sick and unhappy.

Or perhaps you thought you’d be a nice green person and be environmentally friendly by using only wind energy, but then as your city got bigger, you realized, not only are you running out of space to place wind farms, you were running out of places with enough wind to actually generate meaningful amounts of electricity as well. Add in the fact that while your citizens were initially all groovy about the idea of green energy, they aren’t psyched about having the loud, noisy things in their backyards and you have one of the many massive headaches that you will be able to untangle with glee in Cities: Skylines. 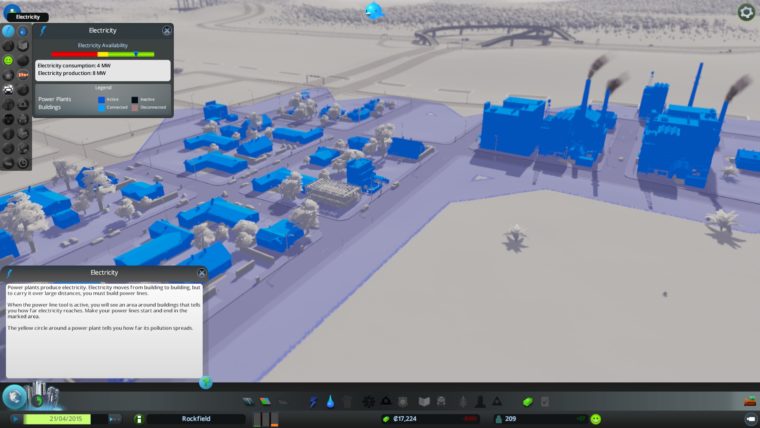 If there was a major gripe I had with Cities: Skylines it is the fact that information isn’t as useful as one might expect. Sure, it’s very prettily displayed in game. Sure it’s all understandably color-coded, but sometimes I just want good old-fashioned graphs and numbers and those are quite hard to come by in Cities: Skylines.

Budgets for services and infrastructure are also somewhat lacking in intuition. It isn’t the easiest thing to discern the affects of your changes. It’s possible, but one thing I thought was pretty great about SimCity 4 was the ability to adjust the budgets of individual buildings, as opposed to the service as a whole, to better cater to the city. Unfortunately, Cities: Skylines doesn’t let you do that. 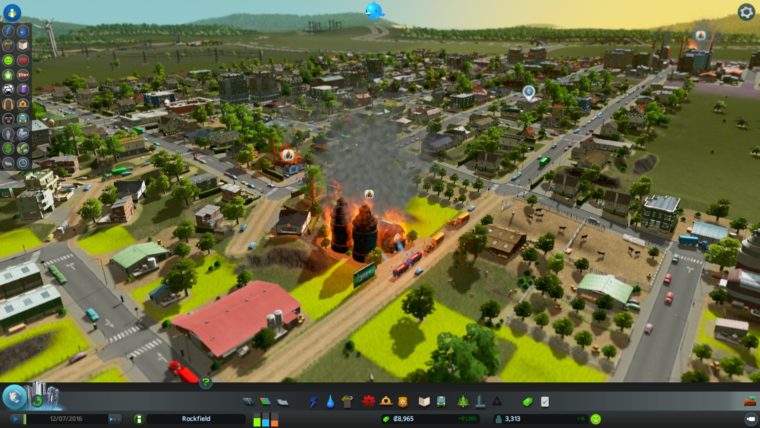 There also appear to be a lot of fires. Like an inordinate amount. Not that it mattered really, fire services are automated and do not require you to actually direct them to fires. Neither do you have to direct ambulances or police cars. It just happens and you get to see them work. This is where you start seeing some truly odd behavior by the game. As opposed to sending a firetruck or two to a fire, the AI often sends all available firetrucks to the same location, even if there are multiple simultaneous fires raging. What sometimes makes Cities: Skylines even weirder is that fire trucks and other emergency vehicles will drive over parked vehicles like they’re nothing, to get to and from where they are needed. 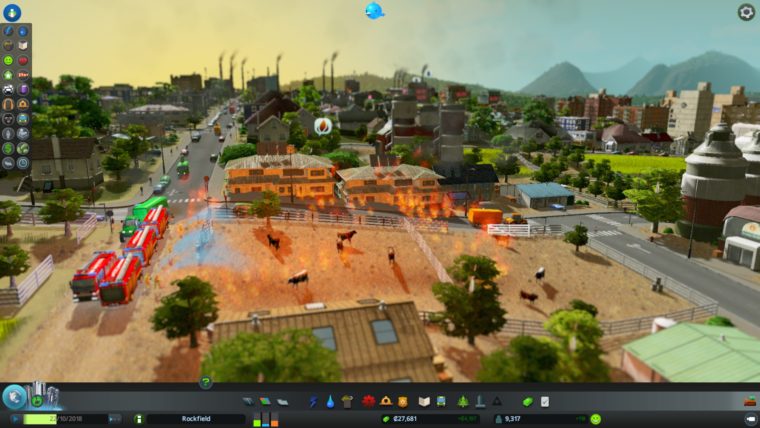 Then there are some features that are missing that one would probably expect or highly desire in a city-building sim like a day and night cycle. Say what you want about the 2013 SimCity, but it was pretty cool to watch streetlights go on and off and your sims go about their daily businesses and participate in rush hours.

The lack of a day-night cycle is made even more noticeable when one realizes that in Colossal Order’s previous game, Cities in Motion 2, they had just that. That isn’t the only thing that they did well in a previous game that Colossal Order have neglected to bring to Cities: Skylines. The Cities in Motion series did a really excellent job at making subway stations that didn’t take up whole city squares and could be placed street side between buildings and the road, just like real, normal subway stations. Yet in Cities: Skylines you need to reserve whole sizable chunks of real estate merely for a subway entrance if you want to take advantage of public transportation. Quite a head-scratcher. 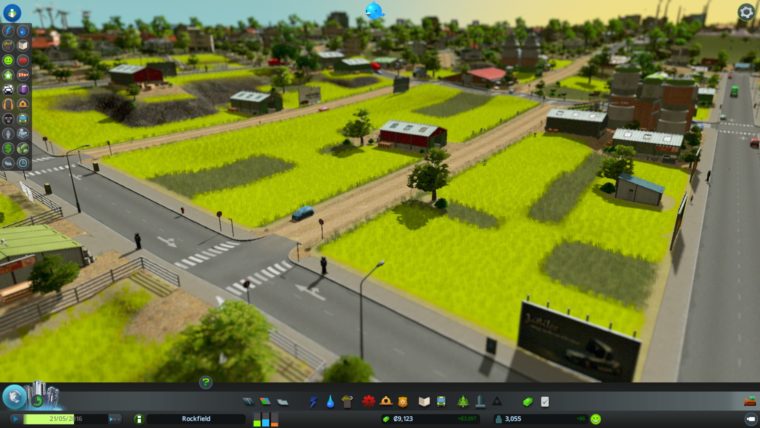 Add in the clear lack of variety in the buildings available to you in the vanilla build of Cities: Skylines, and you really start to get some serious flaws with the accumulation of minor gripes. For example, you know something is up when the police buildings button only has two buildings available in it and they are merely the small and larger version of the same building (a whole button dedicated to two buildings? Really?).

But in the end, that’s what they are. Minor gripes. And the beauty of Cities: Skylines is that it is a Paradox Interactive game and if there is anything Paradox Interactive does well it is that it makes sure the games it publishes are extremely modder friendly. For most of the issues I’ve harped on about in this review, I won’t be surprised if fixes and tweaks by modders already exist in the Steam Workshop. And for the other, perhaps more complicated issues, after a few months they will surely have official or modder fixes and additions that will make the problems disappear. 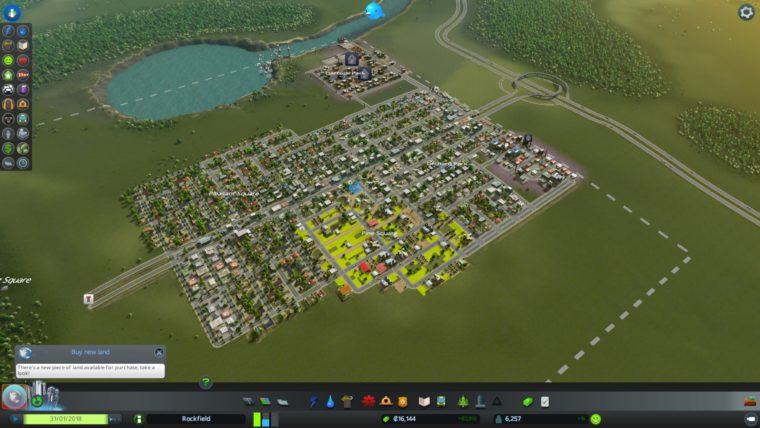 Whether you play Cities: Skylines with or without mods is up to you. Not all mods are made equal, but if you’re willing to devote the time to figure out which ones are the good ones and which ones aren’t, you can definitely enhance your city-building experience. And even if you don’t want to deal with any of that modding stuff, you will still be able to have a great time with Cities: Skylines. It’s not perfect, but none of its issues are truly game-breaking and if you like city-building sims, there is, quite simply, no other game that is better than it. 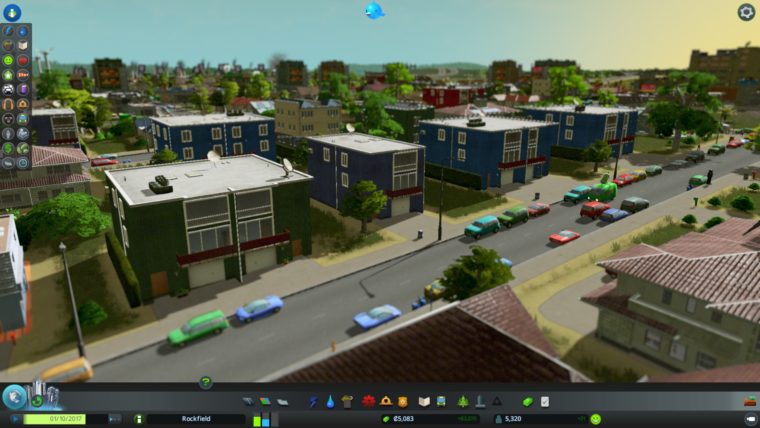 Cities: Skylines is how city-building games ought to be. It’s fun, it’s pretty, it’s easily approachable, yet, difficult to master. It doesn’t have all the features that one might dream of in the perfect city-building simulator like a day-night cycle or swathes of data and statistics to comb through when optimizing your city, but it does absolute wonders with the features it does have. Add in all the modding content that can only make the game better and you have the new king on the block.