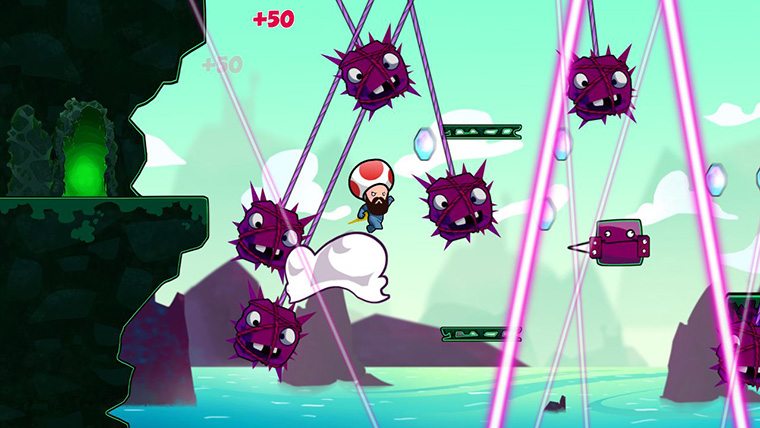 Fans of the platforming genre should be reveling in the release of Pwnee Studios’ Cloudberry Kingdom. It offers and makes good on the promise of an unlimited number of procedurally generated levels, character randomization, and a new experience ready to go each and every time you play the game. Funded by Kickstarter back in 2012, Cloudberry Kingdom recently arrived on a number of different platforms.

This platformer ticks all the boxes in its attempt to be the only side-scroller you’ll ever need to play again. Its got all the rage inducing excitement that platformer fans crave, which means its both difficult and rewarding. The game has an interesting presentation to it, colorful and vibrant, although it closely resembles what you might find in a Flash based game; meaning that it’s rather flat and simplistic. A thumping hodgepodge of disjointed musical tracks will accompany you on your journey to ‘Save the Princess’ in the story mode for Cloudberry, but there’s also a healthy roster of game modes that take advantage of the procedurally generated and random elements of the game.

For those who aren’t looking for the svelte presentation found in games like Super Meat Boy or the Rayman series, Cloudberry Kingdoms will definitely offer up a challenge. Almost instantly you’ll be put to task with Cloudberry. It’s a game that requires twitch reflexes and precision input for successfully navigating the game’s neverending course list. These courses or stages are short and sweet. They task you with collecting coins and making it to a door at the end of the level, and navigating a wide variety of environmental hazards, in looking for that perfect timing-based route.

Cloudberry’s levels might be short, but they are jam-packed with obstacles. The variety found in the random levels is unparalled, and they almost seem like they make sense for your given character abilities. Bob, the main character in Cloudberry, is constantly changing. He’ll be given new abilities that greatly change the way that you must attack each level. The mixture of the randomly generated levels and Bob’s abilities are always spot on. You never get into a situation where the generated level doesn’t feel right for your current ability set.

As mentioned previously, Bob is on a save the princess quest. This story is delivered through for what all intents and purposes is a very shallow storyline, plagued by poor attempts at humor and characters that you can’t help but think were inspired by LittleBigPlanet at some level. But story isn’t the main attraction here, and Pwnee doesn’t try to pretend that it is. It’s all about pushing the player for just one more turn, one more crack at getting to the next door. There are hundreds of levels in the story mode, and an unlimited number of levels in the Arcade and Free Play modes, which will have you collecting coins and racking up points to compete against other players for the best scores.

The platforming challenge and tight controls aren’t what will turn you off of Cloudberry, at least for me it wasn’t. It was the fact that as a complete package, the game felt disjointed. There never really feels like a rhyme or reason for anything in Cloudberry. From the weird and loosely knit story, to the unexplained abilities that Bob has, Cloudberry Kingdom never really presents itself as anything but an unadulterated platforming game, and expects you to take it as is.

Difficult as it may seem, Cloudberry’s solutions are almost always to push forward. In the modes there is a checkpoint, you will almost always be started in a situation that will set you up for success. In many cases the simple solution was to keep pressing forward, no matter how dauting or hectic the action became on the screen. It doesn’t help that on almost every level, coins will guide you to the path where you are most likely to find success. And despite the changing colors, level designs, and Bob’s abilities, Cloudberry Kingdom just started to get boring after a while, feeling noticeably more mechanical the more you play.

This mechanical nature even spills into the game’s audio selections, which were one of the most off-putting parts of Cloudberry Kingdom in our opinion. I’m not sure if these musical tracks are selected with the same random roll of the dice that level design was, but it just never seemed to come together as a complete presentation. Turning the music off leaves you with little more that the slight dings of coin collection, so it’s a take it or leave it aspect of the game.

Cloudberry Kingdom does check all the boxes of what to have in a platforming game, and in many areas, offers a lot more. It’s just that the whole doesn’t feel like it equals the sum of its parts. For whatever reason, it never really comes together into the cohesive experience that some of the games it tries to emulate, do.