A blast from the past that's still great today. 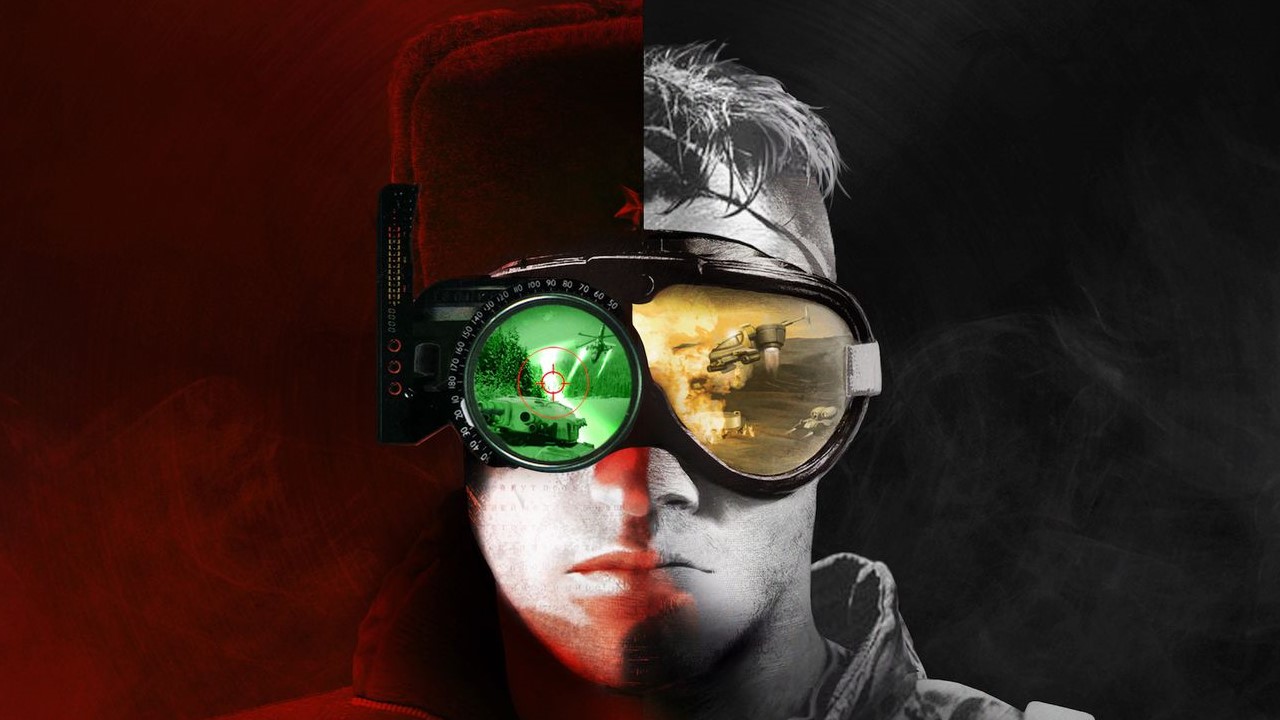 Westwood Studios’ Command & Conquer was the RTS series of the 90s. While Warcraft and Age of Empires were popular in their own right, Command & Conquer was arguably the first series to distill the RTS experience into rapid-fire, high intensity missions that were easy to learn, yet difficult to master. In recent years the franchise has been largely MIA (unless you count the mobile spin-off Rivals, which you probably shouldn’t), so it came as a bit of a surprise when EA announced earlier this year they were remastering Tiberium Sun and Red Alert. Not only that, but there wouldn’t be any micro-transactions, and the source code would be released in its entirety for the modding community to utilize.

Throw in Petroglyph Studios, founded and ran by former Westwood programmers Joe Bostic, Michael Legg and Steve Tall, and it appeared EA was actually investing in a worthy remaster, instead of some slap-dash refresh for a quick buck. Unlike some returning fans I have some personal baggage attached to this remaster – I remember driving by Westwood Studios’ headquarters off Tenaya Way here in Las Vegas as a kid (my dad even claims to have taught a few of the owners how to scuba dive), so Command & Conquer has always been a point of hometown pride for me.

Two of the best RTS’ ever made, and in my backyard? Anything less than perfection from this remaster would have been disappointing (even with my obvious bias out of the way), so believe me when I say Command & Conquer Remastered isn’t just great, it’s easily one of the best remasters ever made. 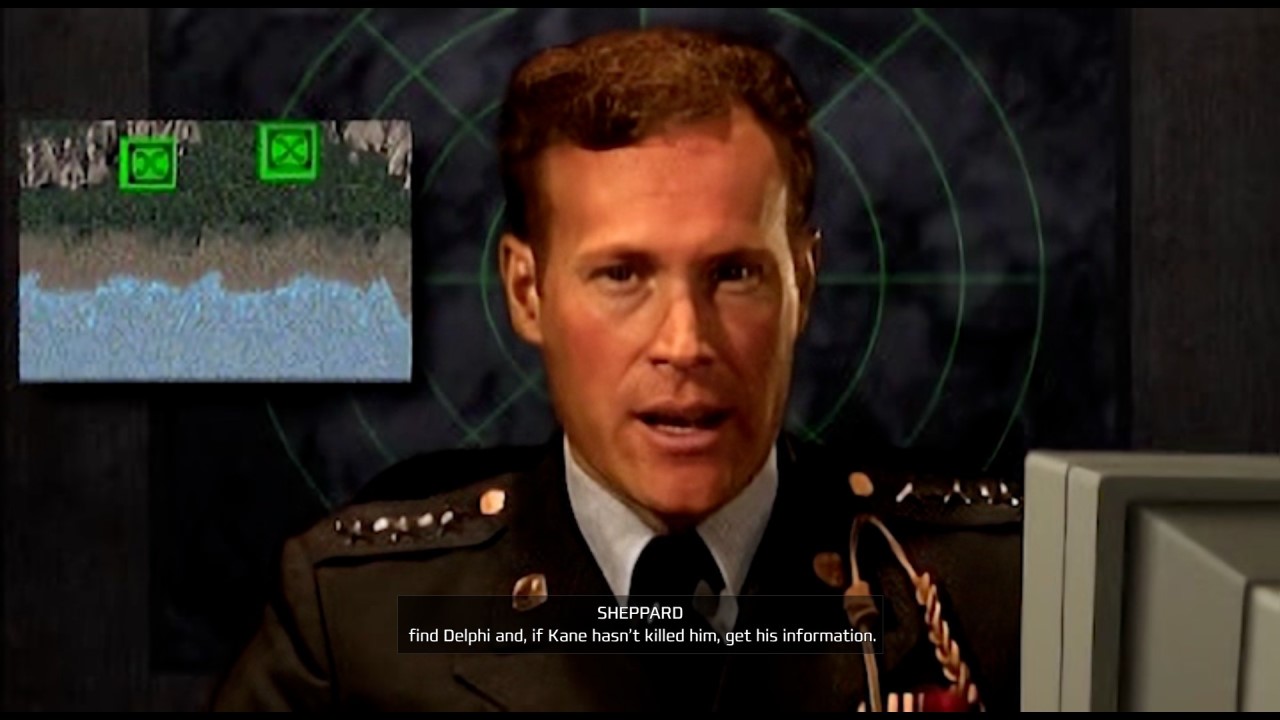 Command & Conquer Remastered Collection respects the past while looking to the future.

Petroglyph and Lemon Sky Studios both know what makes Command & Conquer special. The snappy missions, the cheesy yet enduring live-action cutscenes, and iconic soundtrack are all intact here, though with a modern sheen that makes reading the battlefield an easier task than it was in 1995 and 1996. Both Tiberium Sun and Red Alert boot with a delightful mock setup that “upgrades” the graphics and audio to UHD and HD respectively (though returning fans can go as old-school as they desire) Even the original Westwood Studios logo is intact here, with a simple yet pleasant HD makeover.

This commitment to appealing to both modern sensibilities and the original audience extends all the way down to the controls and menus. There isn’t a single aspect of this remaster that can’t be set to its original state, and the remasters are all the better for this. You can mix and match the new control inputs with the legacy options, or disable them entirely (such as queuing units in the much improved sidebar, which no longer requires endless scrolling to find the unit or building you wish to construct). A full jukebox is open to you within the game, filled to the brim with both the original and remastered tracks. Have certain favorites, like Hell March? Then go ahead and make a custom playlist, or disable all the enhanced music if you want to go for that classic feel.

This extends to the graphics as well, which can be swapped between the Remastered assets and the original’s with the tap of the Spacebar. No fiddling in the options required, one key is all you need to see just how far we’ve come since the 90s, when units were hard to parse in the middle of giant battles. While the updated graphics may not be the most technically advanced we’ve seen, they are all true to their original models. Even the cutscenes have been upgraded thanks to the use of A.I. upscaling (the original files have long-since disappeared), though the results are mixed. Character close-ups fair better than larger scenes, but considering these are decades old its an easy fault to forgive (Joseph D. Kuncan continues to chew the scenery as Kane, so what’s not to love?). 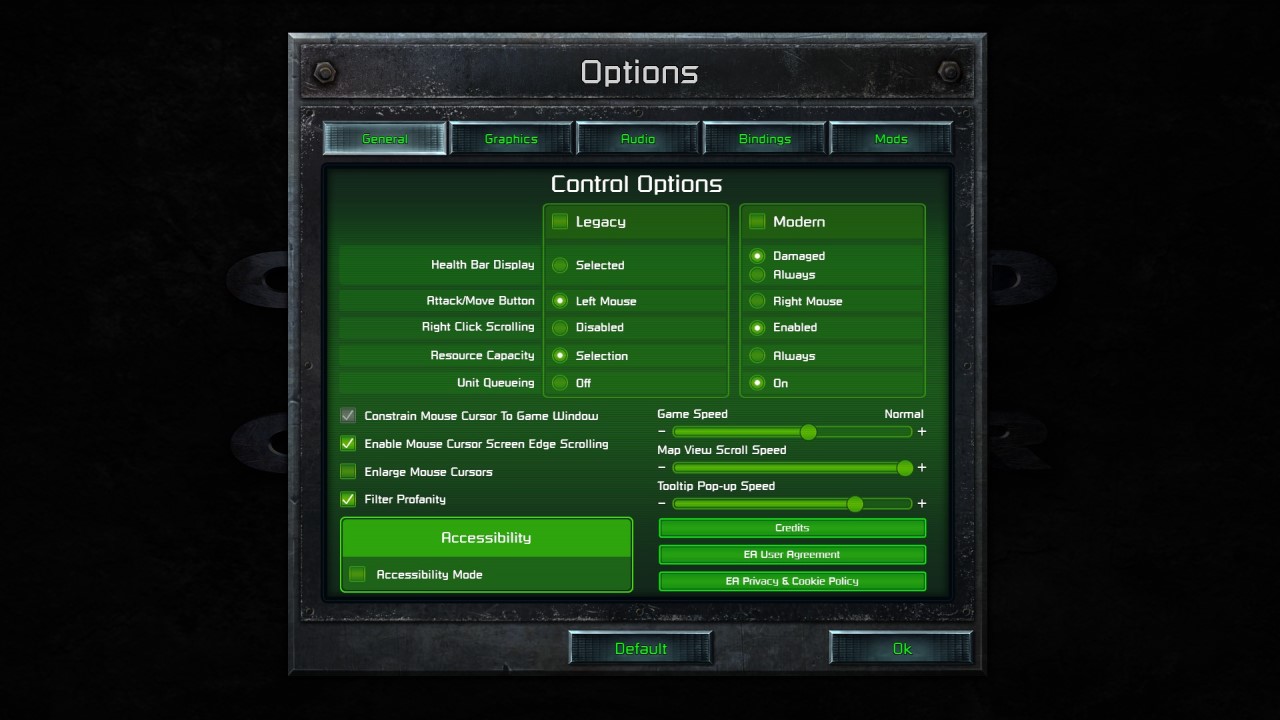 Everything within a mission has been lovingly overhauled to provide not only greater readability, but more personality. Flags now wave in the breeze with their faction’s emblem clearly visible. Units no longer have the odd stutter-step they once had (though you can totally turn this back on, if you so desire). It’s enough of a face-lift to make each game easier on the eyes without sacrificing the tone and feel that sets Command & Conquer apart from its contemporaries.

Both Command & Conquer games are 20+ years old, so you’d expect performance to not be an issue. By and large, both games run fantastically at all resolutions tested, and easily break above 120 frames-per-second on modern hardware. Hell, if Digital Foundry’s analysis is any indication, you can probably run both Tiberium Sun and Red Alert off integrated graphics with nary an issue, because neither game is all that demanding. The games are also clear of any major or minor bugs – the only time I had a problem was when my game refused to queue multiple units despite the option being enabled. A quick reset of the toggle in the menu did the trick, however, so by no means was this a big deal.

At $20 for the entire collection, Command & Conquer Remastered Collection offers plenty of bang for you buck. Not only do you get both Tiberium Sun and Red Alert with remastered audio, music, graphics, and some smart quality-of-life updates, the bundle includes all the expansions, the special missions from the console editions, deleted scenes and bonus footage, and a much revamped multiplayer interface. 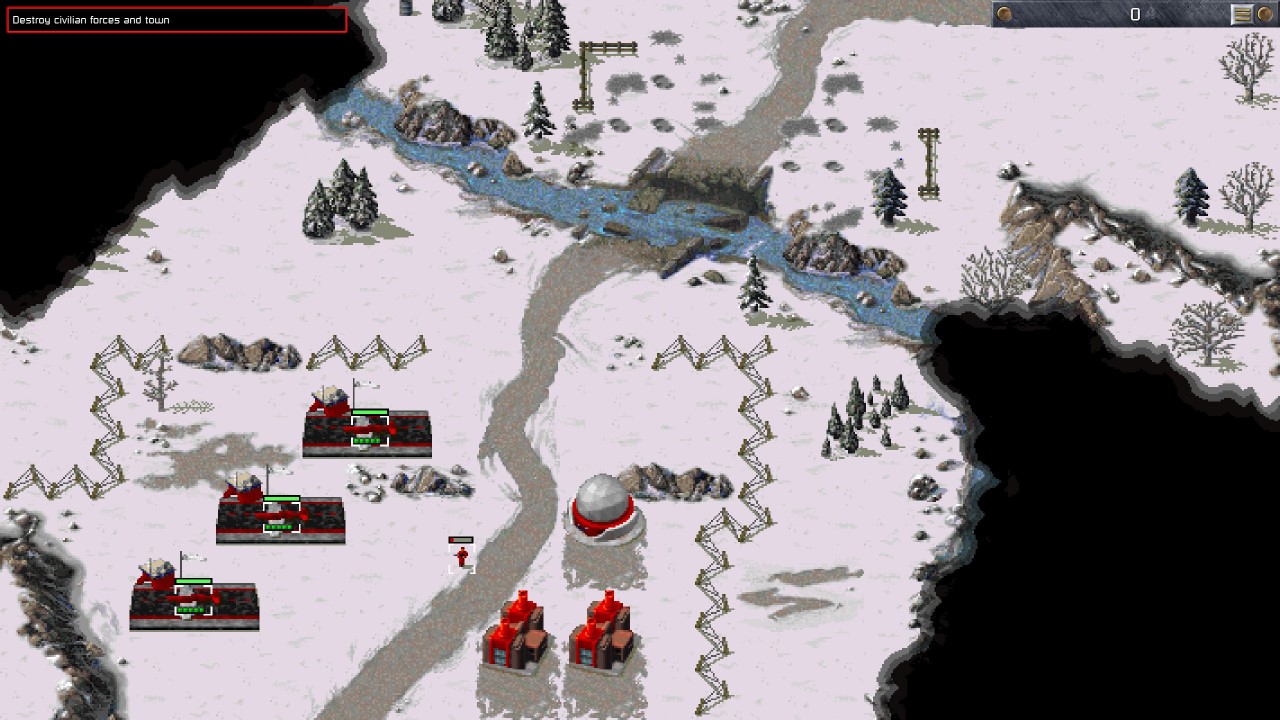 This rebuilt multiplayer may be the true star of the show, considering how extensive it is. Everything within the Skirmish and Online menu is easy to understand, and all the options you would want to tweak are accessible and simple to alter. You have offline Skirmish, 1v1 ELO-based Quickplay, and the ability to either host or join a custom game. Player-made maps can be utilized, and multiple settings can be adjusted to tailor a match to your exact whims, sans Quickplay which has a stricter set of rules to keep competition fair. Jumping into the lobby, hosting your own game, or using the automatic matchmaking of Quickplay are all easy enough to do, and the robust suite of options means fans will have plenty to do once they complete all the single-player missions.

Factor in full mod support thanks to EA and Petroglyph releasing the full source code for free, and I expect Command & Conquer Remastered to draw in both novice and returning RTS players for years to come. The numbers have fallen off a bit since launch, but if the last week has been any indication then I wouldn’t be too surprised if player-count holds steady here on out (and the Steam numbers alone don’t even factor in those who bought the game strictly on Origin).

If there is one complaint I have to levy at Command & Conquer Remastered Collection is the sharp difficulty spike in both titles’ mid-games (though the GDI campaign in Tiberium Sun has arguably the sharpest spike in the bunch). Even on Casual difficulty both Tiberium Sun and Red Alert are not afraid to eat your lunch, and neither game transitions gracefully from the early game to the mid. You’ll go from a casual operation with a single over-powered commando laying waste to an enemy base, to trying to establish a base with eight grenadiers being bombarded by anti-personnel canons out of the gate. It’s not impossible to overcome, but there are still times Command & Conquer kicks your ass with little indication the beating is imminent. 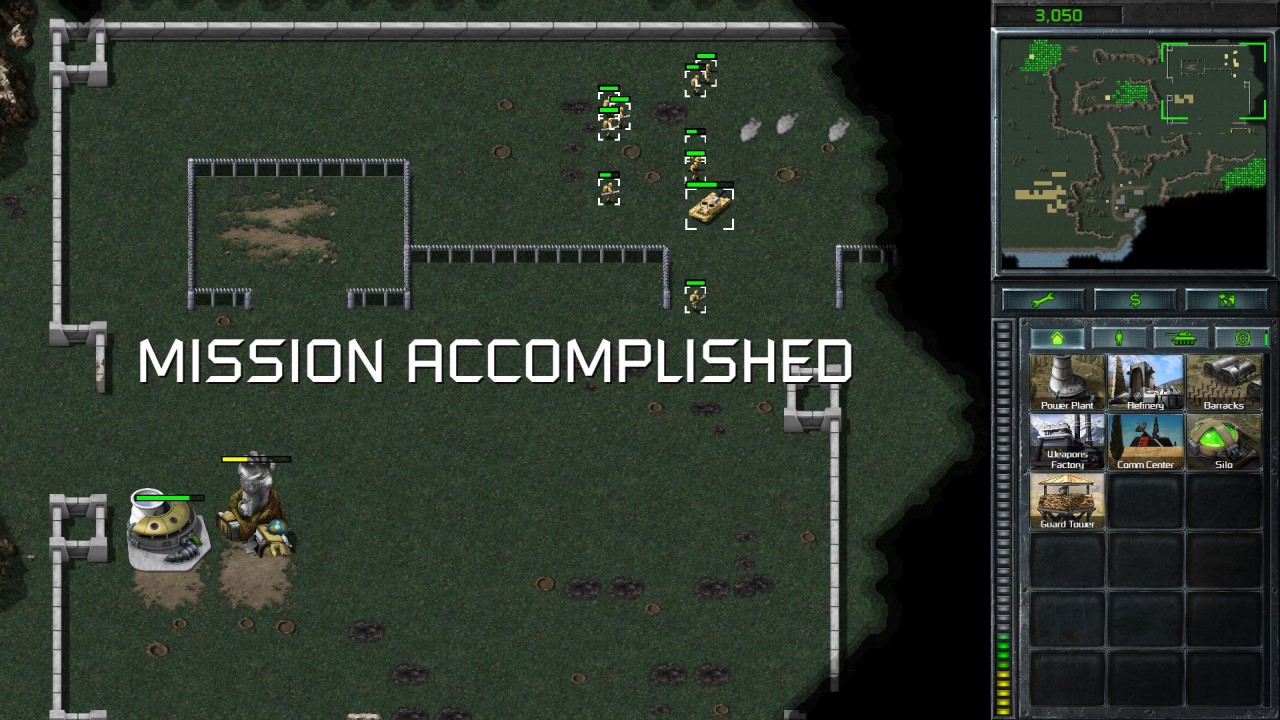 Command & Conquer Remastered Collection bundles two landmark real-time strategy games with all of their extra content included at a reasonable $20 price-tag. Not only are you getting these games with enhanced graphics and audio, you’re getting a vastly superior multiplayer segment atop a number of quality-of-life tweaks that don’t undermine what makes these games great. If you’ve never played an RTS before Tiberium Sun and Red Alert remain excellent jumping-on points for newcomers, though the mid-game difficulty spikes may cause some to gnash their teeth in frustration.

At the end of the day, Command & Conquer Remastered Collection is a refresh done right, and perhaps one of the best we’ve seen. It alters what needed to be altered, increases graphical fidelity without sacrificing the original design, and respects what made these games great in the first place. All of this for a decent price without a single micro-transaction in sight. Command & Conquer Remastered isn’t just the best way to replay these classic RTS’, it’s one of the best and most consumer-friendly remasters ever made. Welcome back, Commander.