Concrete Genie impresses despite not living up to its full potential. 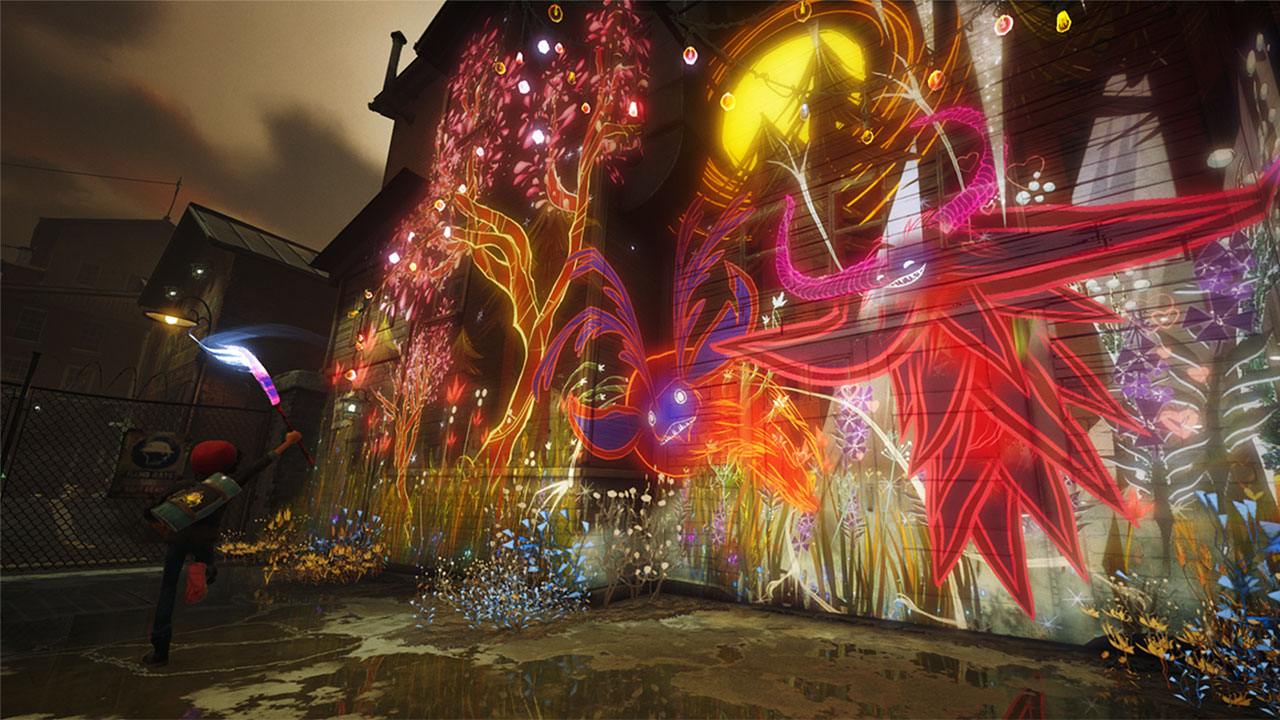 Concrete genie is a family friendly game where you play as Ash, a bullied tween who’s creative outlet is drawing.  When he wanders into the wrong part of Denska, he finds himself up against a group of bullies who take his sketch notebook and tear out its pages.  Soon thereafter Ash comes into contact with a whimsical creature who bestows him with a magical paintbrush and the ability to interact with creatures called Genies.  Ash is then tasked with bringing the darkness infested and dreary city of Denska back to life with said brush and the help of the genies.  This is a children’s storybook come to life, in a game that is suitable for all ages.  While it might be a little light in terms of mechanics for someone looking for something with challenge, it does make up for that with a beautiful presentation and a unique set of painting mechanics.

Concrete Genie is a game about art, making art and appreciating it.  It’s a game about bullying and how to deal with it. As you progress through the town of Denska you are constantly trying to avoid this group of bullies.  As you encounter them you come to learn the reasons why they lash out at others.  It’s a wholesome game that tries to tell a story about bullying and the potential reasons that others bully.  Lighting up the town with your paint brush clears the Darkness. Working with the Genies allows you to progress further and further into the world.  At its core, Concrete Genie is a creative game, with this core painting mechanic being the main draw, with some light puzzle solving gating your progress.

This game has a really exceptional presentation when it comes to visuals and music.  While the game is incredibly short, it is impactful in the short time it will take you to get the credits.  Concrete Genie is pretty straight forward and linear, though there is plenty of personalization when it comes to the painting that you do, how you create the genies, and the different “masterpiece” milestones that you reach.  There are also quite a few secondary “missions” that you find along the way which can unlock new things like genies or pictures that you can paint.  Although, not hitting them won’t keep you off the main path to completion so they feel a little unnecessary as they do little to expand on the world.

Use Genie abilities to progress further and further into the world 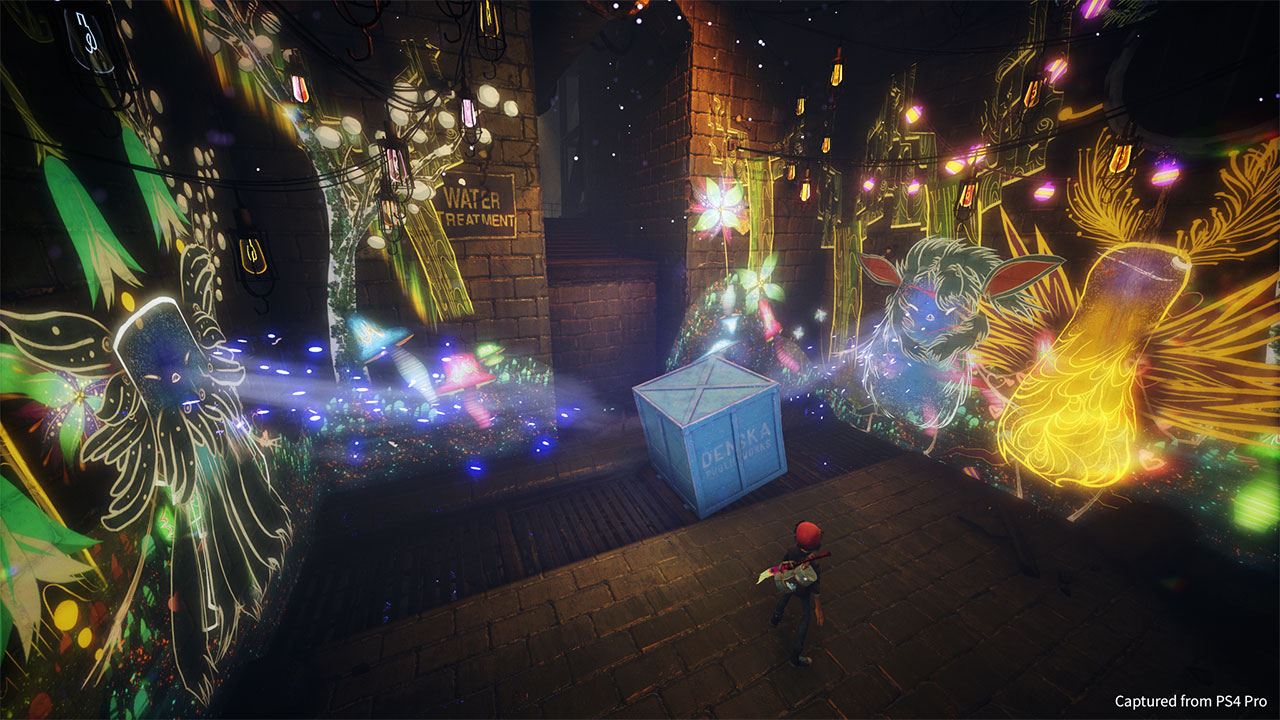 As it says in the name, the Genies are the stars of the show.  Using your paintbrush and the Dualshock controller you’ll paint these creatures into existence in different parts of the world (Wherever you can find a genie symbol).  These genies are created with pre-fab pieces that you’ll have by default as well as pieces that you can find which includes things like horns, tentacles and the like to give them a bit of personal touch.  Creating genies and appeasing them is where the fun is in Concrete Genie.  Tracking down new genies and features that you can paint is fun albeit it somewhat shallow.  Creating unique genie characters with the pre-fab pieces is undoubtedly cool once they come to life with their own personalities, but it never really feels like it matters at all in the end.  Once you’ve mastered the fire, electric, and wind genies and know what and when to use each of them there’s very little in terms of a gameplay reason to actually take or spend the time in carefully creating these characters.

There’s quite a bit packed into the opening of this short game, but it becomes pretty clear that it’s somewhat of a one trick pony once you get to the second “Act” of the game as it kind of throws out everything out the window and turns into a third person combat game.  It’s an unexpected twist from a whimsical game that’s about exploration and creation.  Regardless, even in the opening hours the puzzle solving is incredibly light and intuitive and mostly revolves around finding blueprints that allow you to paint new items.  As you learn new objects to paint you’ll naturally uncover the solutions to the problems.  Those problems usually come in the form of one of the genies wanting you to paint a specific thing.  Once you do, they will open new areas for you with their abilities.  There are fire genies, electric genies, and wind genies.

You’ll have the option to paint the world however you want, but you will need to bend to the genie’s wishes at times 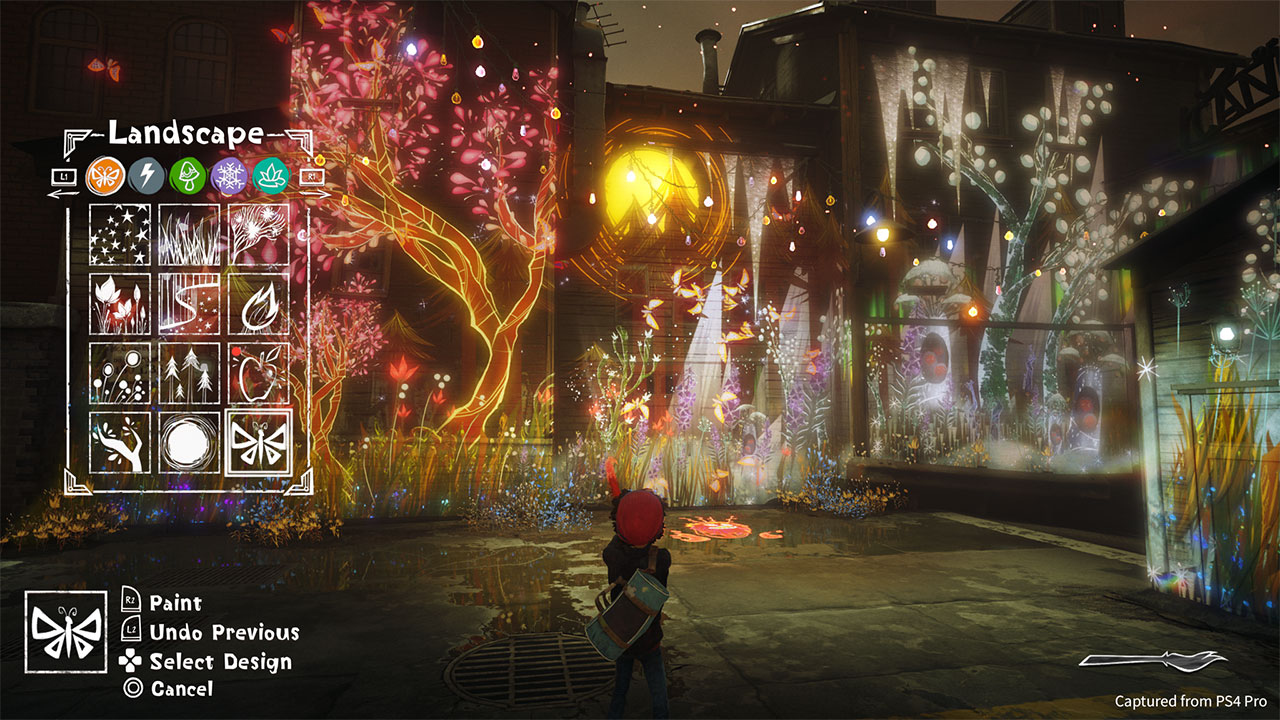 By default the game uses the motions controls of the dual shock, but can be switched to use the right thumbstick.  The painting can feel a bit cumbersome when using the motion controls, and both control methods seem to have camera issues.  We defaulted to the Right Stick approach for painting and that felt just fine outside of the occasional camera awkwardness.   There is a pretty tight gameplay loop in Concrete Genie in the first act of the game.  You’ll paint the town in every spot that you find light bulbs.  As you paint, the lights will light up.  Light up all the lights in an area and the darkness will be removed from an area which allows you to progress.  The only real hurdle is that there are some walls that cannot be painted with anything other than “Super Paint”.  This type of paint is earned by completing certain wishes of the genies, who will ask you to paint certain objects in certain places.  Once you appease them, they will allow you to use their special power to progress.

The bullies are always looking to give you a hard time 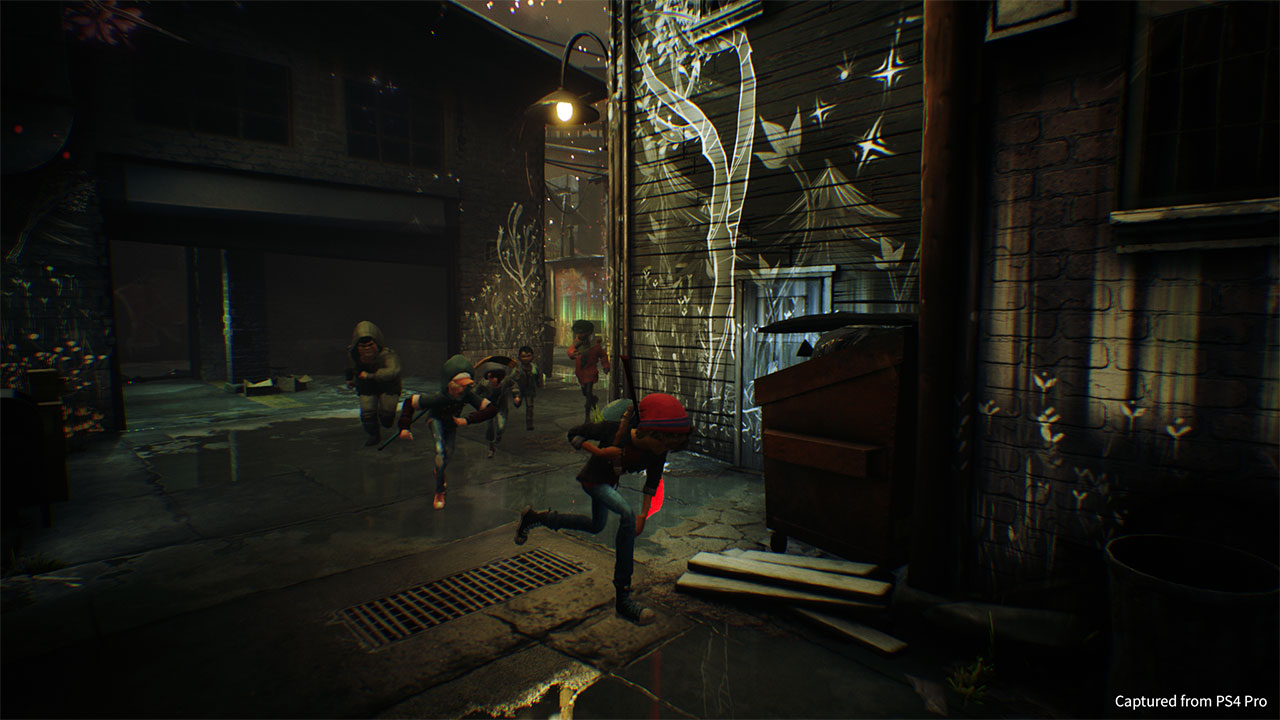 Concrete Genie is incredibly hand holdy. While this game is likely targeted at children, it’s sheer lack of any need for critical thinking does leave something on the table where it feels like the puzzle system could have been just a tad deeper to appeal to an even broader audience.  As it stands, it’s incredibly hard to enter a fail state in this game whether in the first act where there’s no combat or the second act where there is.  The game is over relatively quickly, but there are some additional modes.  We can’t speak to the quality of the VR Experience in the game, but there is that for those that own the PlayStation VR. There’s also a free painting mode which will let you go back into the different districts of the city and repaint them to your liking.

Still, Concrete Genie does seem like the perfect game to sit down and play with a child.  Watching the creative characters come to life on the screen give the game the feeling of a children’s book come to life.  It tells a story that doesn’t delve too deep into the characters or world, but teaches a solid lesson about humanity.  The star of the show is most certainly the visuals.   Concrete Genie is dark and dreary world that you bring to life with a paint brush.  The pictures that you paint and the genies that you summon are so well animated and look so good in spots that it’s hard not to appreciate the art in a game that champions the creative. 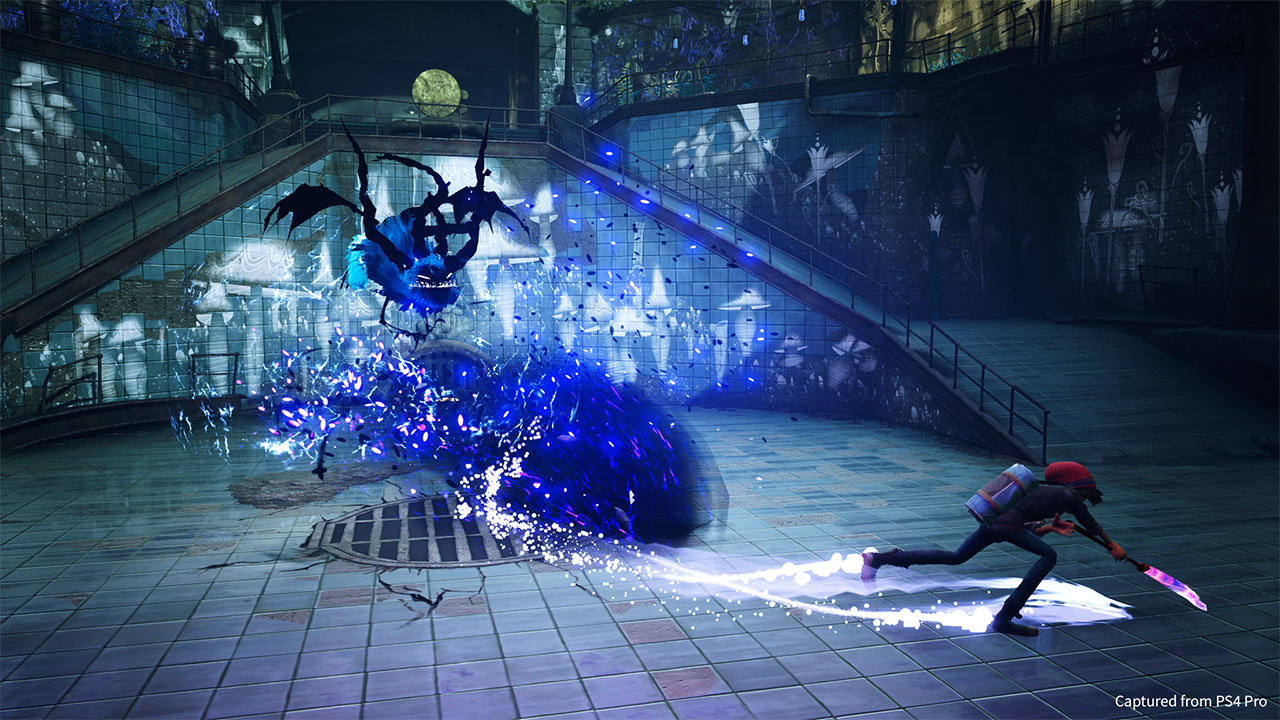 Even with Concrete Genie feeling a little short in spots, it’s really only because it feels like it could’ve been fleshed out a little more.  There feels like there was a lot of potential with the painting aspects that is never fully realized.  While we don’t normally comment on price in our reviews, it is worth noting that this is a $29.99 game and not a full price release.  That said, going into it and thinking you’re gonna get 10’s of hours of enjoyment out of it would be wrong.  The main path of the story took us around 5 hours and that was rooting out all the collectibles and items that you could find.  You could potentially spend longer with it with the VR functionality and the free paint options.  However, it didn’t quite set its hooks in to make me want to jump right back into it.  That said, it’s also not a game with much variety in terms of the outcomes of the game so there’s very little reason to play it again.

Concrete Genie is certainly an impressive game when it comes presentation.  It’s got a great score and impressive art direction, that leave you absolutely jaw-dropped at times.  It’s a short game though, and that feels even more so when the game goes away from its core strengths and barrels towards the finish line with lackluster combat sequences.