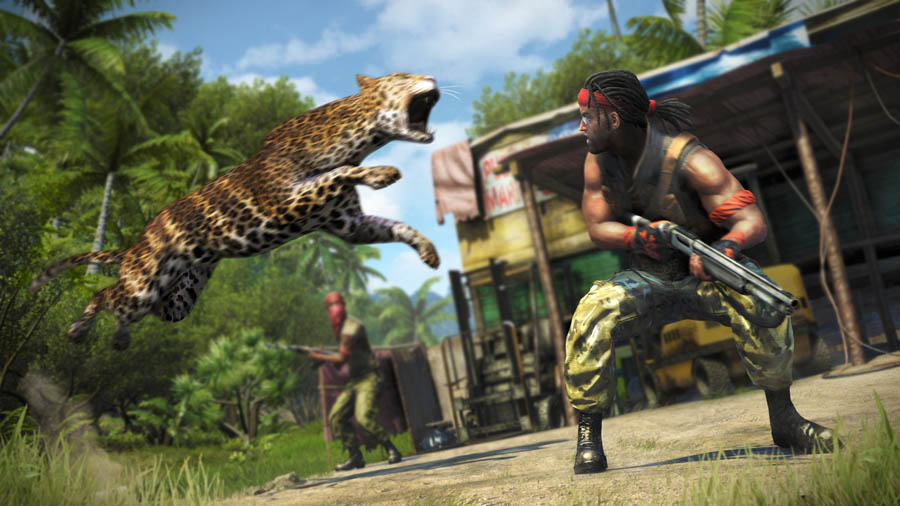 Far Cry 3 places you smack dab in the middle of the worst vacation that you could ever possibly imagine.  One minute, you and your wealthy American friends and family are relaxing while vacationing in the fictional Rook Islands, and the next, you are being sold into slavery by island’s overlord.   Thrust into the brutal reality of this jungle, the player finds a hostile environment, where the sandbox and open world gameplay reveal themselves as the familiar meat of Far Cry 3.

Outside of the game’s brutal opening sequence,  which shows your daring escape into this war torn island, Far Cry 3 seems on the surface to be very similar to previous games. The game consists of two warring factions, with you smack dab in the middle of it all.  However, there are big changes afoot in Far Cry 3, and they reveal themselves in short order.   Your mission to rescue your friends and family is paramount in Far Cry 3.  It’s one of the better reasons that Ubisoft has given us over the course of this franchise to warrant the violence that ensues in the Far Cry gameplay.  The island native Rakyat people have aided you in your escape and inhabit this island that has been overrun with the slave trading, drug running baddies led by Vaas and a mysterious boss figure named Hoyt.  To get your family and friends back in one peice, you’ll need to work with these natives to restore peace to the island, reclaiming outposts in this massive open world.

Much of what’s good about Far Cry 3’s single player campaign is its interesting twists to the gameplay formula of the franchise.  It incorporates stealth,  first person gunplay, crafting, and deep progression system full of unlocks and perks, alongside a more believable island embroiled in a drug fueled civil war.  Like many open world titles, keeping you on track will be your main mission marker, but you are hardly required to follow it unless you want to.  You can tackle these story objectives that will take you down a very specific path for the game, or you can just get lost in the many activities to be found on Rook Island.  Liberating outposts and deactivating radio towers will allow you to see all there is to see in each zone, of which there are eighteen in the game.  There are side missions that entail you running supplies to remote areas on the island, and given the ability to see each zone, you can also see what types of wildlife  and plant life reside in the area.  These will need to be hunted, skinned or picked and used for crafting materials for things like knapsacks, ammo pouches, health kits, and buffs.    Navigating the island on foot is a dangerous affair.  If soldiers amped up on hallucinogens toting machine guns wasn’t enough, the island will also be throwing its fair share of hostile wildlife at you.  The good news is, these hostile animals don’t discriminate between you and your enemy, and can be used to your advantage in many scenarios.

Not surprisingly, Far Cry 3 relies on you being a smart hunter.  This means using stealth to avoid detection, thinning enemy ranks before anyone is aware of your presence.   You’ll definitely need to kill your enemies to progress, but doing so quietly will yield much better results than going in guns blazing, and Ubisoft provides plenty of tools to do just that.  Out of the gate, you’ll learn that sneaking by crouching is the best form of transportation when near enemies.  Watching their patterns from afar and tagging them with your high powered camera will allow you to approach each situation with a tactical awareness of each soldiers location and what type of weapon they are carrying.  Once you’ve got your enemies sized up, you can use the game’s sneaking mechanics and distraction techniques to lure them into positions that play to your advantage.  In liberation missions, most outposts also feature alarm systems that need to be deactivated or help will be on the way if triggered.  The game definitely rewards you with big XP bonuses for stringing together stealthy kills and liberating outposts with noone being the wiser, but their biggest benefit is the ability to fast travel and re-up on supplies once secured.

These XP bonuses will be put to good use.  In Far Cry 3 the growth of your character is tied to a mystical tattoo that the natives have given to you which allows you to perform special feats, and ultimately become a more proficient warrior.  Similar to just about every game out there, this skill tree doesn’t tie you to a specific path per say, but is arranged in a logical manner of progressive unlocks for different play styles.  While many of the unlocks are pretty standard fare like health bonuses and speed increases, there are some that will give you new ways to eliminate your enemies.

With all that Ubisoft has added to the Far Cry formula, I still couldn’t help but feel like they missed a huge opportunity here.  For a game whose story starts out with such a bang, and provides such a meaningful reason to survive the trials and tribulations of this island nightmare, it isn’t quite able to keep up the same tension throughout the entire game.  It’s not uncommon for open world games to fall into this situation as their very nature is to give players time consuming options, but for some reason Far Cry appears like its going to avoid this,  but ultimately does not.  The story goes off the rails, you no longer feel like the earnest every-man who has the deck stacked against him.  Partially this is due to the upgrade paths available for your character, but as you continue down the story path, you’ll find that this is by design.  Without getting into too many spoilers, this transition from average joe to jungle warrior is definitely by design.  The problem is, the latter just isn’t as fun to play as.   As you progress towards the end-game content in Far Cry 3,  the game becomes much less rewarding for players who liked the survival aspects found in the early goings.

Mileage will certainly vary in the Far Cry 3 single player campaign, depending on just how much exploration you are willing to do.    The end result of your laboring grind of liberating the entire island is a more powerful main character, but it is entirely possible to complete the game without even scratching the surface of this island.  With about 10 hours of main story line missions to complete, you’ll have some options once finished.  You can head back to the island and rack up any achievements you might have missed along your way by completing side missions and liberating territories.   Alternatively,  you can head into the far-less compelling online options of Far Cry 3.  There are actually a ton of online options in this game, even if they aren’t ground breaking stuff.  Four player story based cooperative online play is another aspect of this game that feels like it missed the mark.  Not nearly as engaging as the single player action, tying it better to the characters from the single player portion of the game might have made this mode more enticing.  As for it’s competitive features, you’re not going to find anything here that isn’t done better somewhere else.  This is not the same model that Ubisoft has acheived with Assassin’s Creed.  While the gun play is similar between the single player and online modes, the actual gameplay are just variations of gametypes that are found in popular shooters like Call of Duty, bringing little if anything to spice things up.

Far Cry 3 definitely won’t be commended for its innovation in the multiplayer department, but its single player story is a recommendable fun time that open world aficionados will enjoy.  The multi-dimensional and unpredictable nature of this jungle journey makes each and every mission a crap shoot, and is ultimately what makes Far Cry 3 enjoyable.  It’s one of the better shooters of 2012 if just for its variety in its gameplay and sandbox elements.  Eventhough it doesn’t stick to the hyper-realistic nightmare that it kicks off with, it’s still a rewarding story, though we would have liked to see this original idea seen all the way through.